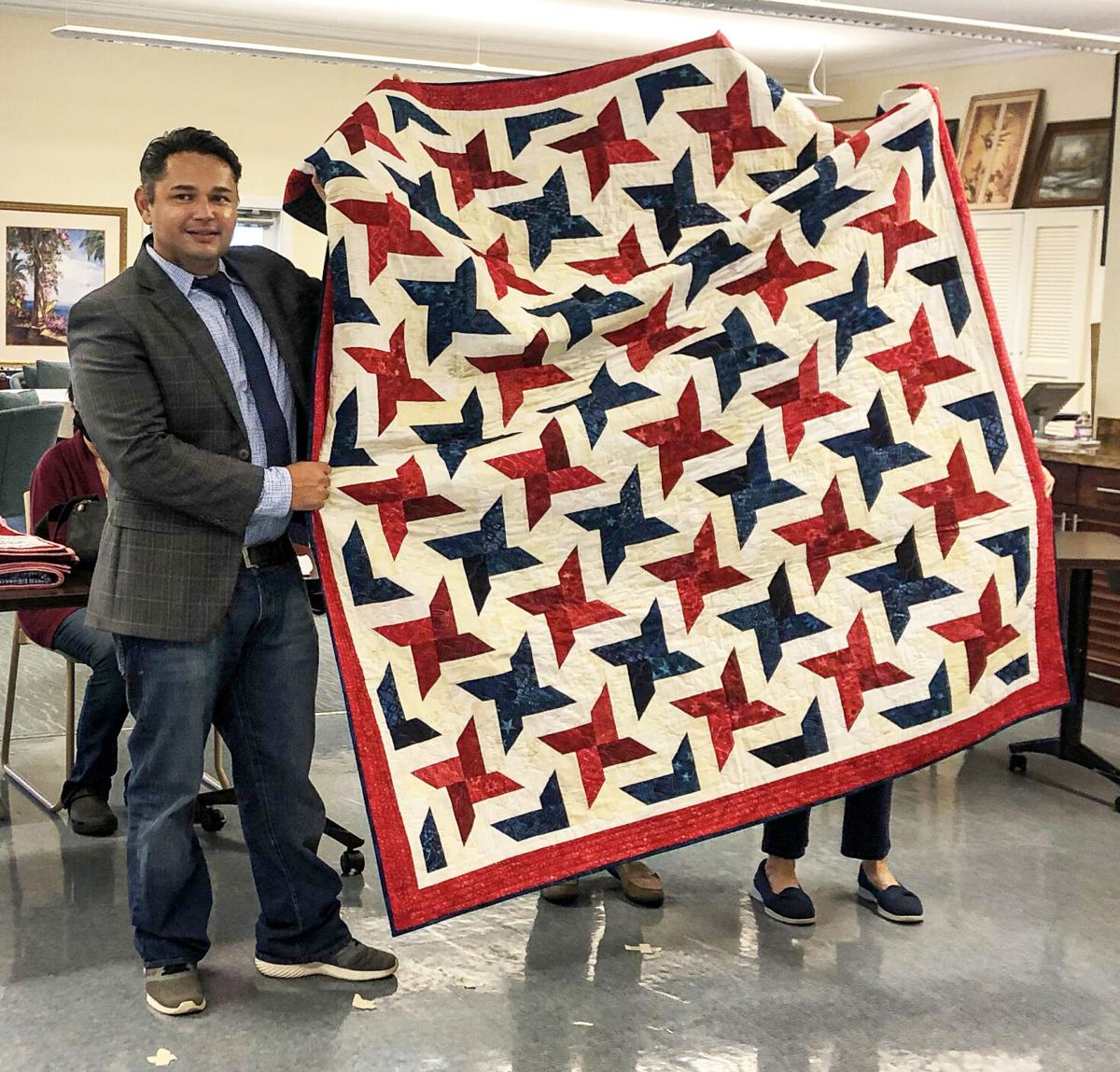 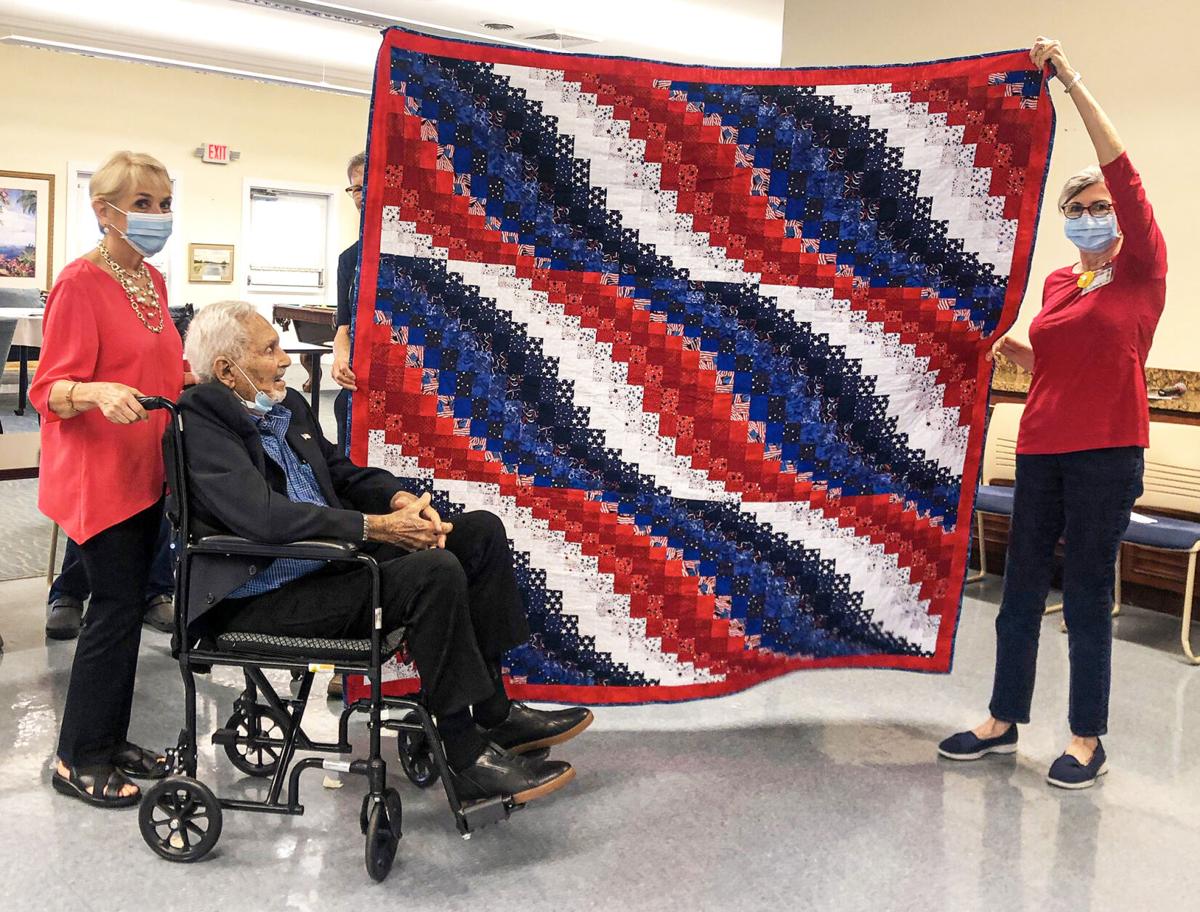 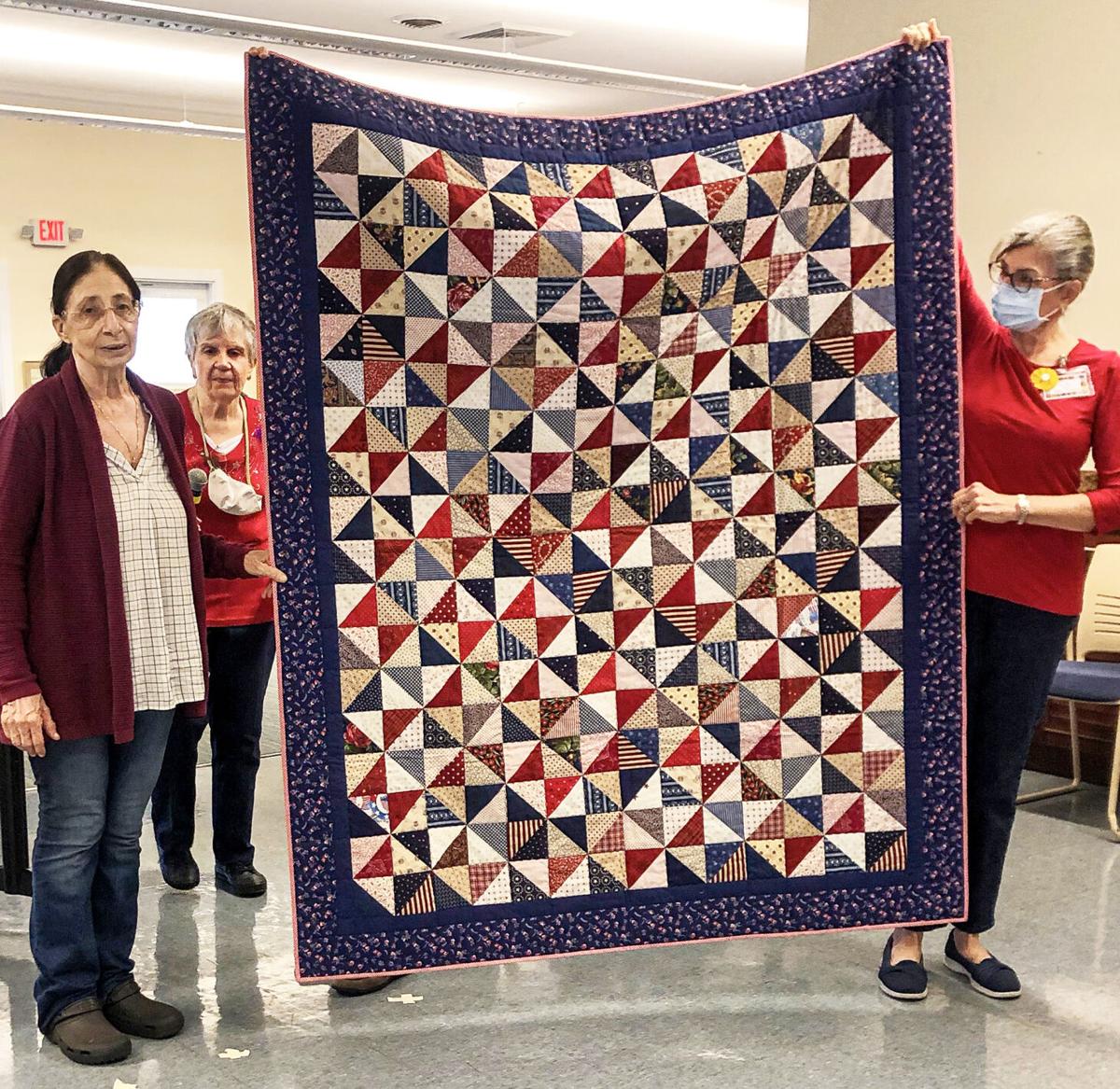 Until COVID-19 closures, the tradition of presenting Quilts of Valor to selected veterans took place annually at Homestead Air Reserve Base (HARB) at the May meeting of local chapter of Military Officers Association of America (MOAA).

Joyce Cotner, military wife of a career Air Force officer and longtime member of the Miami Ocean Waves Quilting Guild, helped initiate the tradition at HARB. No determination has been made yet as to when external groups may again have access to HARB and Cotner didn’t want another year to pass without a presentation. The quilts are created by members of the Guild and most of those individuals never have the opportunity to meet the actual

And so it was that Saturday, November 13, 2021, a small group gathered at East Ridge in Cutler Bay to be linked into the Guild’s meeting.

The first presentation was to Korean War veteran Carl Zwerner, Private First Class, U.S. Army. The 94-year-old was accompanied by his wife, Adrianna Valdez, and his son, Michael. Originally from Yonkers and raised in Atlanta, Zwerner moved to Miami in the 1960s where he established his business, Glass International, and worked for more than sixty years before retiring. Assigned to the Headquarters Company, 1176th Engineering Construction Group, 1946-1947, Zwerner was one of the few soldiers who knew how to drive and therefore took his superiors to many places and units. He could also type and was often picked for clerical tasks as well.

After presentation of the quilt, he made the comment that he was sometimes told, “Oh, the Army is the lowest branch of service.” His response was straightforward. “No, I would say to them; it’s the highest branch. It was the Army in World War II where my brother fought that won the war and saved Europe.” He continued briefly. “I served with so many people in Korea and have forgotten many of their names. Now I have something additional to be proud of in meeting y’all and having this quilt.”

The Vietnam veteran, Jose Adan, Specialist Four, served in the U.S. Army February through December 1970 and received the Vietnam Service Medal and Valorous Unit Award. Although he was unable to make it to the ceremony, Ocean Waves Member Helen Demmie McKane, who nominated him, accepted the quilt on his behalf.

Seth Fabio Tellez, Third Class Petty Officer, U.S. Navy, served during Operation Enduring Freedom where he was aboard the Aircraft Carrier Abraham Lincoln CVN 72 and they operated out of the Northern Pacific. He was age nineteen at the time of the 9/11 attacks and was among the ones who stepped forward to join the military in the Global War on Terrorism. Accompanied by his aunt, Nelly Jacques, the Kendall native spoke of working on an aircraft carrier. In addition to the aircraft capability, they transported and provisioned thousands of tons of munitions and missiles for Navy and Marine Corps forces. “I learned the meaning of toil, as in the Biblical sense,” he said in describing the massive scope of a powerful ship that is indeed a “floating city”. Constant monitoring to prevent problems was especially important.

“When you’re out in the middle of the ocean there isn’t a AAA to call,” he commented. He received the National Defense Service Medal, Sea Service Deployment Ribbon (twice), Good Conduct Medal, Humanitarian Service Medal and “Golden Shellback” designation. That is special tradition for those have been to the point in the Pacific where the Equator and Grand Meridian meet; Nautical points 0 latitude and 0 longitude. After leaving the service, he wanted to see different parts of America and lived in several areas before returning to Kendall. Now forty, his advice to young men starting out is, “Read the Bible and take guidance from there.”

As Cotner always tells recipients and attendees, “This is a lifetime award stitched with love, prayers, and healing thoughts.”

To learn more about Quilts of Valor, go to www.QOVF.org

To learn more about the Miami Guild, go to http://www.oceanwavesquilters.com/