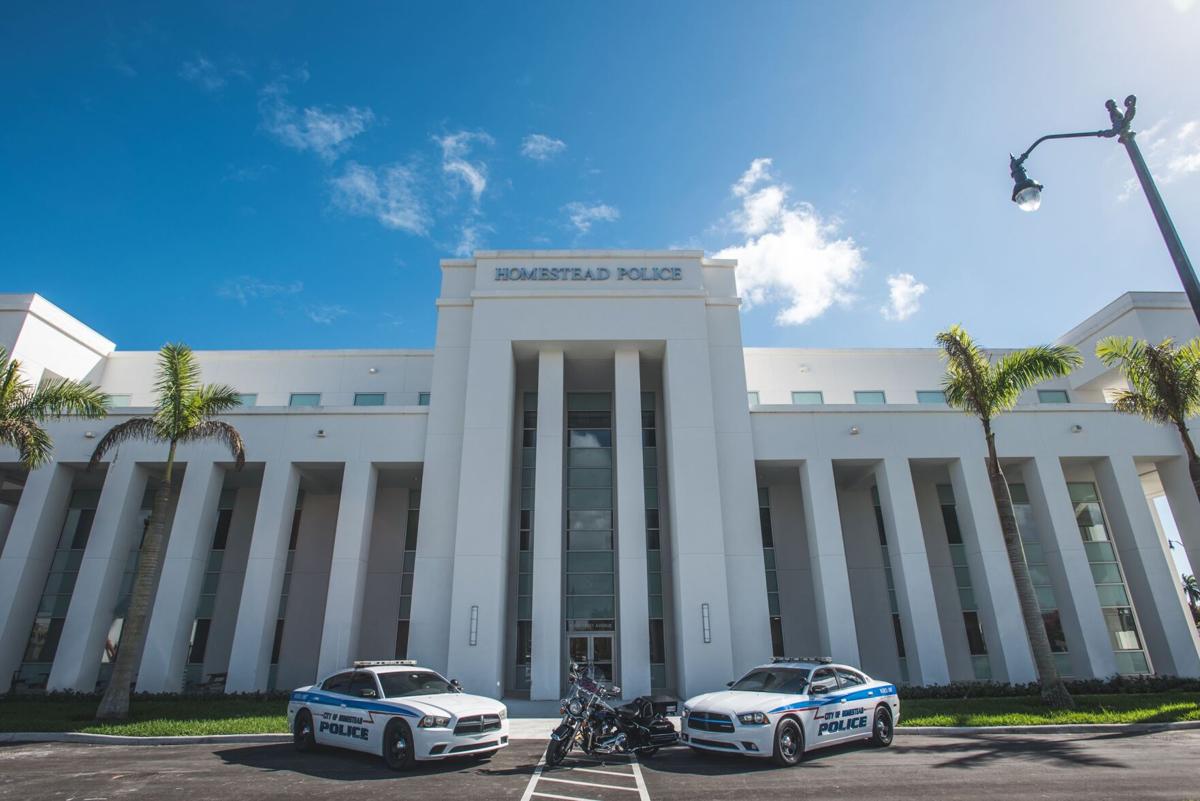 Budget discussions included the cost of bringing on ten new police officers along with vehicles, and equipping officers with body camera. 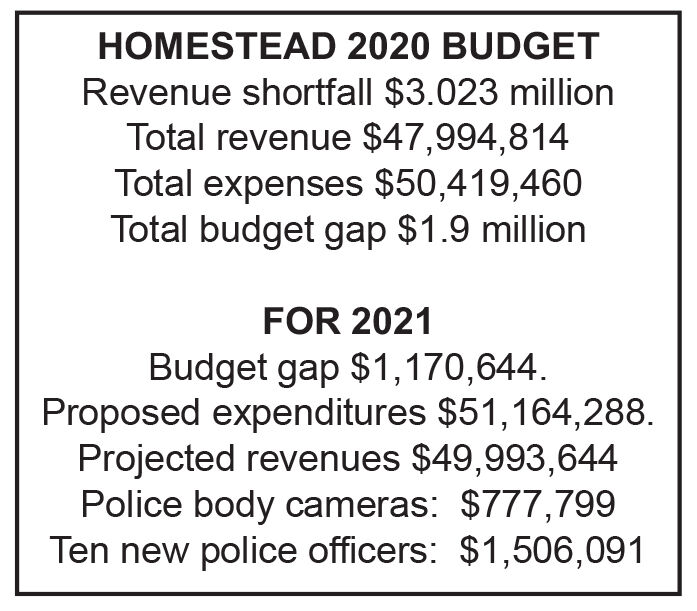 Homestead City staff presented a proposed City budget to Council at its workshop on August 11. The budget is for fiscal 2021 beginning October 1.

Police overtime due to COVID-19 totaled $1.1 million, reduced by $183,000 from a Department of Justice grant. Police operations form 56% of the City budget.

Council was waiting for these final expense numbers before holding the budget workshop.

Projected revenues are $49,993,644, according to City Finance Director Carlos Perez.

The 2021 challenge is adding $1.1 million of Cybrarium costs. The City took over the County’s library duties in exchange for collecting the library tax of 0.2840 mills. This is not a new tax but had been collected by the County. It does artificially increase the City’s tax millage rate to 6.2055 per $1000 of taxable property value. Florida limits municipal tax mills to a maximum of 10.

Homestead also carries a debt millage of 0.4485 for past voter-approved bond issues.

City Manager Cate McCaffrey asked for Council direction on the size and type of 2021 expense cuts and reductions. A Council consensus allowed a printed budget reconfiguration by September 4 for the first public budget hearing on September 8 at 5:30 pm.

A majority Council consensus emerged for hiring ten new police officers at an additional cost, with their vehicles, of $1,506,091.

Council also wanted a contract for police body cameras. That proposed five-year contract has a first year cost of $777,799.

The cost includes the required three new positions to operate; two police officers and one civilian.

Homestead’s Finance Director included an estimated 10.8% increase in property values to projected 2021 budgeted revenues. The City’s water and sewer rates are due for a 6.38% rate increase by October 1 to cover a $630,000 shortfall. City 2021 impact fees were reduced by over $3 million with fewer projects plus $1.7 million in Art in Public Places monies expended for the Cybrarium. Perez said the Capital Projects budget comes back to Council in November for final approval.

Perez told Councilmember Patricia Fairclough-Staggers the cost of hiring ten new police officers expressed in millage rate terms was 0.5114. The cost of police body cameras was 0.2681 mills. The increased cost to a homeowner with an appraised $100,000 property was $77.55.

Mayor Steve Losner reminded Council that body cameras would require additional cuts or millage rate increases in perpetuity. Perez said additional annual staffing costs were $450,000 that could increase but the assumption was growing property values would generate the necessary revenue.

Councilmember Sean Fletcher said, “I support body cameras but based on the data now may not be the right time. They’re not really necessary because the police have done a good job investigating the issues.”

Ultimately, Fletcher voted with the majority to proceed in a five to two Council straw poll - Councilmember Stephen Shelley and Mayor Losner voting NO to increase the millage rate to pay for the additional police officers and body cameras.

Councilmember Larry Roth said, “I have a lot of faith in our citizens and I’d be willing to move this budget to public hearings. I’m anxious to see what kind of turn out we get for a virtual meeting. I want to hear public comments on the concerns for body cameras, the need for additional police officers and the willingness to increase their tax liability for those programs.”

“It’s important we hear from our citizens how they feel about the services they’re paying for,” he added.

As Council went through proposed service cuts, Councilmember Stephen Shelley said, “My philosophical take is that I’m OK with pulling from reserves in a reasonable amount to get a balanced budget due to the unplanned COVID financial impacts. I concur with trying to cut as few services as possible to protect our quality of life. If we do not use reserves, we will have no choice but to make every single cut possible. I don’t think we should raise the millage rate for new discretionary items at an economically disadvantaged time for our residents.”

Homestead lists its tentative 2021 general fund reserve as $6.573 million but 72% of that is required to remain in reserve for fiscal responsibility.

During Council discussions on proposed expense cuts, the City Manager mentioned a letter sent to all City vendors this week requesting a voluntary ten to twenty percent reduction in fees charged Homestead for services.

Councilmember Erica Avila asked the City attorneys if they were crunching their numbers as well for a reduction in fees.  Attorney Matthew Pearl responded, “Details are not yet final but the firm will be offering a 10% reduction in fees for the duration of the calendar year.”  The possible savings to the City is estimated at $33,000.

Mayor Losner led Council’s discussions on potential budget cuts from the City’s contingency funds to police pension funding to the bar on any employee raises across the board.

“Have we cut to the bone without drawing any blood?” the Mayor asked.

Mayor Losner stepped through staff proposals for reducing the frequency of landscape mowing and cutting pool hours at Roby George Park to save $38,000. The Mayor said he didn’t want cuts to landscaping, “In fact, we should do more of that.”

He mentioned the area around the Community Center needed trimming in time for the election when state leaders would be visiting Homestead.

Councilmember Fairclough-Staggers agreed. “I’m not interested in cutting the mowing. For the pool, could there be a hybrid solution rather than a total shutdown?”

Councilmember Jenifer Bailey said she was working with local groups on community swim programs that could supplement pool services. Staff said any shutdown was set for winter hours with summer hours remaining when the pool is heavily used.

On the issue of hiring new police, Councilmember Fairclough-Staggers said, “Perhaps five officers instead of ten plus the three people for body cameras would be a good meeting in the middle. I’m willing to be flexible to achieve our budget goals.”

City Manager McCaffrey thanked Council for its direction and promised answers to the budget questions raised. She reminded Council of scheduled one-on-one meetings as well as time with the CRA staff on its proposed contributions.

In addition to the initial September 8 public hearing, a final budget hearing is scheduled virtually for September 23 at 5:01 pm.