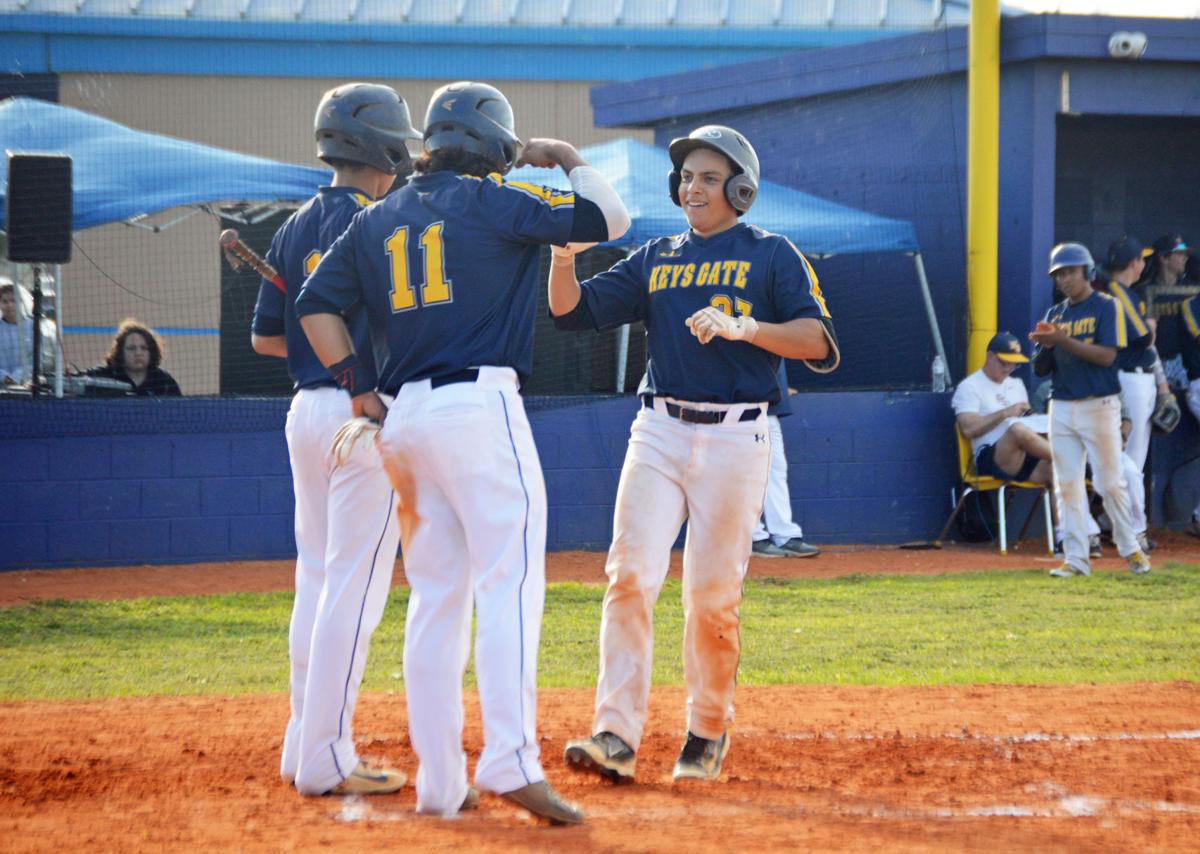 Josue Cruz is congratulated at the plate. 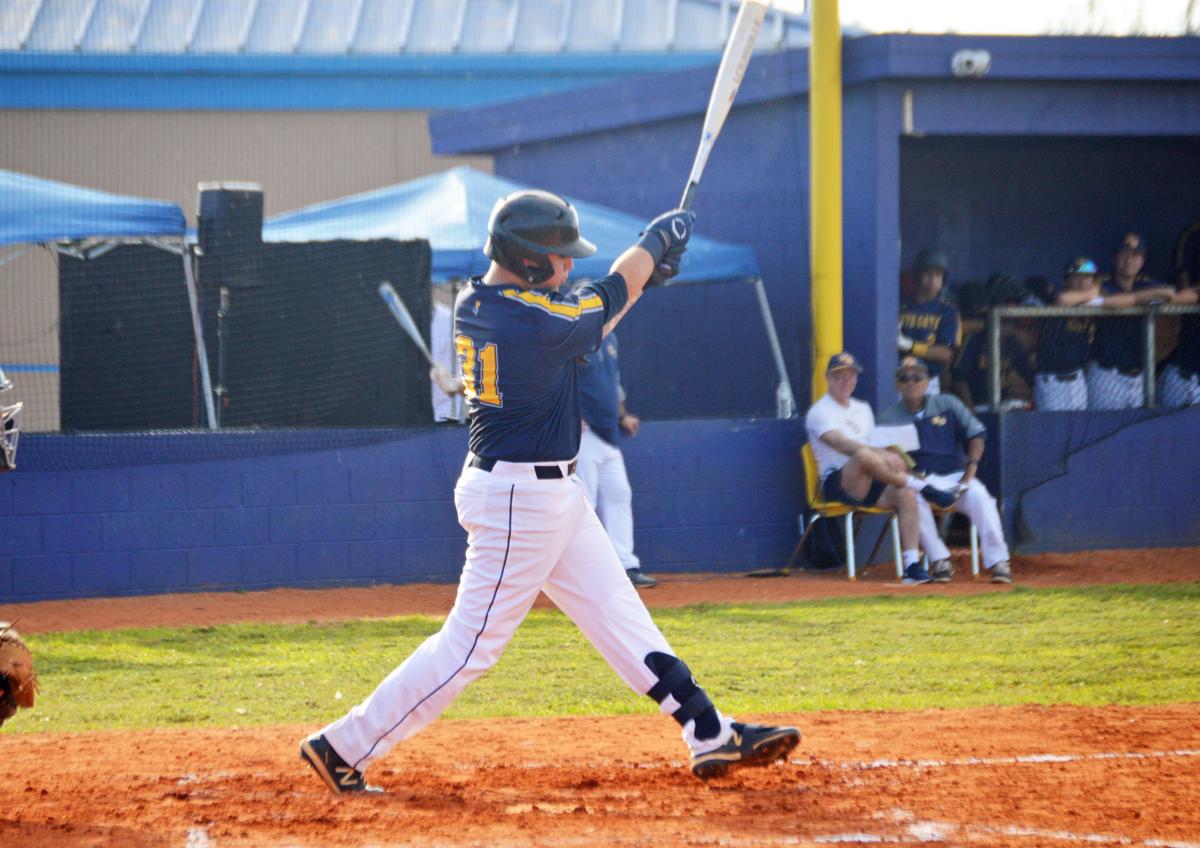 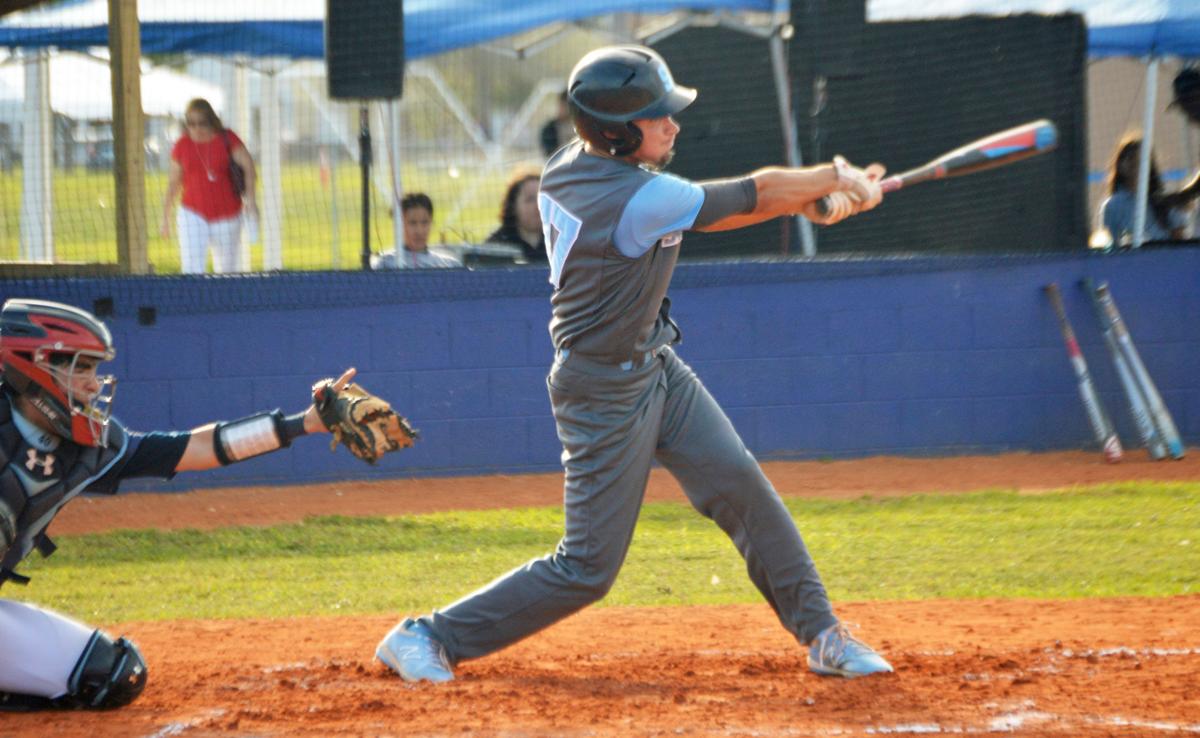 Max Colina-Beckman had two hits and drove in a run. 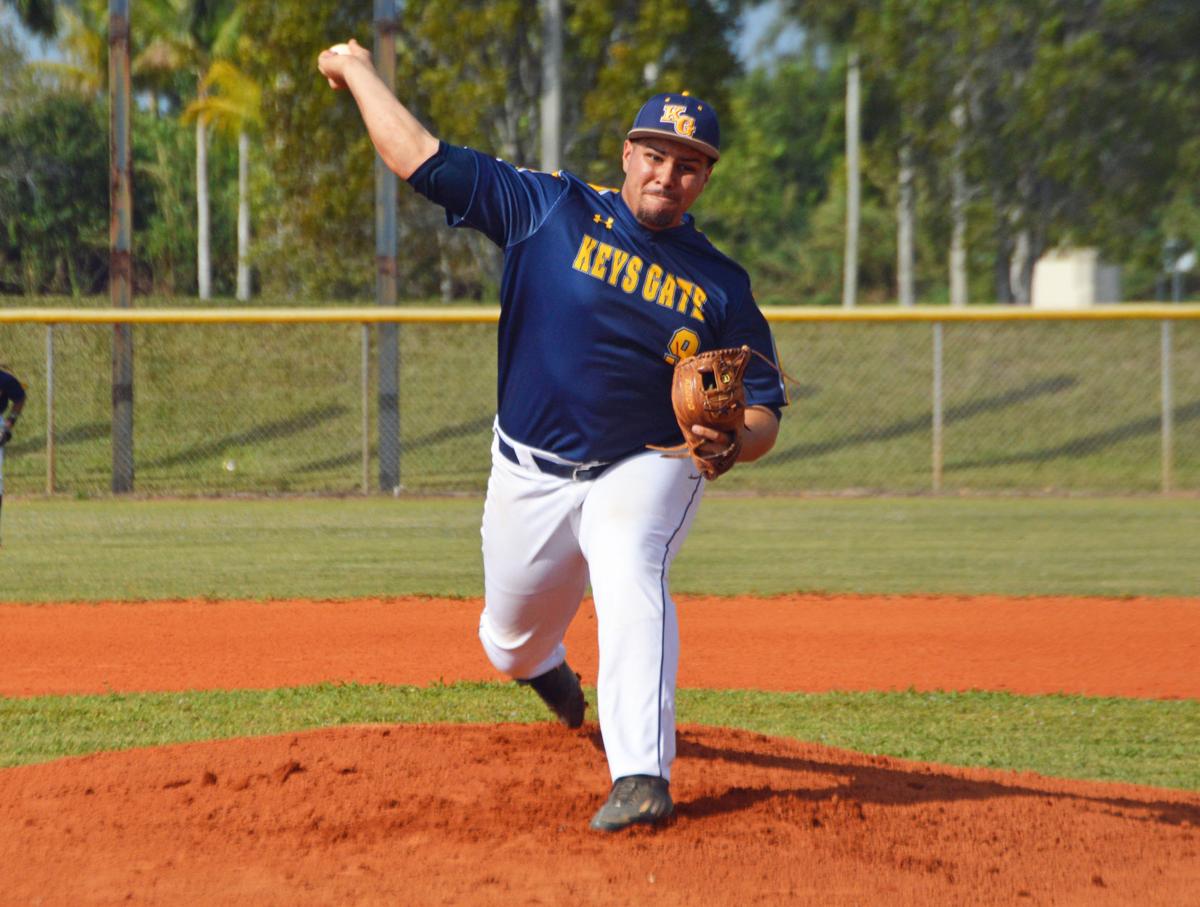 Abel Riverol pitched his first start of the season

Josue Cruz is congratulated at the plate.

Max Colina-Beckman had two hits and drove in a run.

Abel Riverol pitched his first start of the season

It took a couple innings before the bats came alive for the Keys Gate Knights, but when they did, they exploded. Austin Yeber had two hits and knocked in three runs to help power the Knights to a 10-3 win over Somerset Silver Palms. “We’re talented on offense,” Keys Gate head coach Rich Benavides said. “We preach it to these guys that we’re talented when we have a plan and we’re at the plate looking to execute and not just swinging the bat. The first couple of innings we were lost, but once we got started with a couple of bunts it opened it up.” Josue Cruz and Ariel Rosario each drove in two runs while FIUbound Rey Hernandez had a double and a triple for the Knights, who had 12 hits. “We have a good team with good hitters,” Cruz said. “If everyone works, we’re going to have success.” Abel Riverol (1-0) made his first start of the season for Keys Gate (2-2) and pitched 5 1/3 innings and allowed three runs, two earned, and five hits. He struck out five and walked three. “That was huge for us,” Benavides said. “We needed five, six innings out of him to get through this week with big games coming up. If we didn’t get five or

six from him we were going to have to go to the pen and be shorthanded the rest of the way. That’s what we ask of guys who give us spot starts.” Max Colina-Beckman had two hits and drove in a run and William Cruz allowed 10 runs and 12 hits in 5 1/3 innings for the Stallions (0-4) “My group is very young and our guys are having a hard time going away with the ball, that’s why we’re struggling right now,” Somerset Silver Palms head coach Peter Cerda said. “They’ll manage to fix it, but things take time.” Yeber’s two-run double that hopped over the left-field fence started the scoring for the Knights in the third inning. Josue Cruz, Rosario, and Horacio Cruz also

drove in runs to give the Knights a 5-1 lead. “It feels great to be contributing to all of those runs,” Yeber said. “I had a lot of people behind me to drive everybody in.” The Knights followed their fiverun third with four runs in the fourth to extend the lead to 9-1. Rey Hernandez and Josue Cruz each pounded out RBI doubles while Marco Gonzalez and Rosario knocked in runs with base hits. Cruz’s double bounce over the fence, but there was some confusion as it was initially ruled a home run. “At first I thought I got a double, but then they said it was a home run,” Cruz said. “But no, I I just got a double.” Somerset Silver Palms (0-4) scored a pair of runs in the fifth when freshman Nathan Pino drove a fly ball to deep rightcenter for an RBI triple and Anthony Stinson grounded out, scoring Pino to cut the deficit to 9-3. The Stallion had a chance to pull closer in the sixth when they loaded the bases with one out, but Derek Martin grounded out and Pino struck out to leave the bases stranded. “I can count the handful of big hits we have had and that’s really what I was looking for there-who is going to get a big hit and obviously we didn’t get one,” Cerda said.

The Knights tacked on a run in the sixth when Rey Hernandez hit a triple and Yeber drove him in.