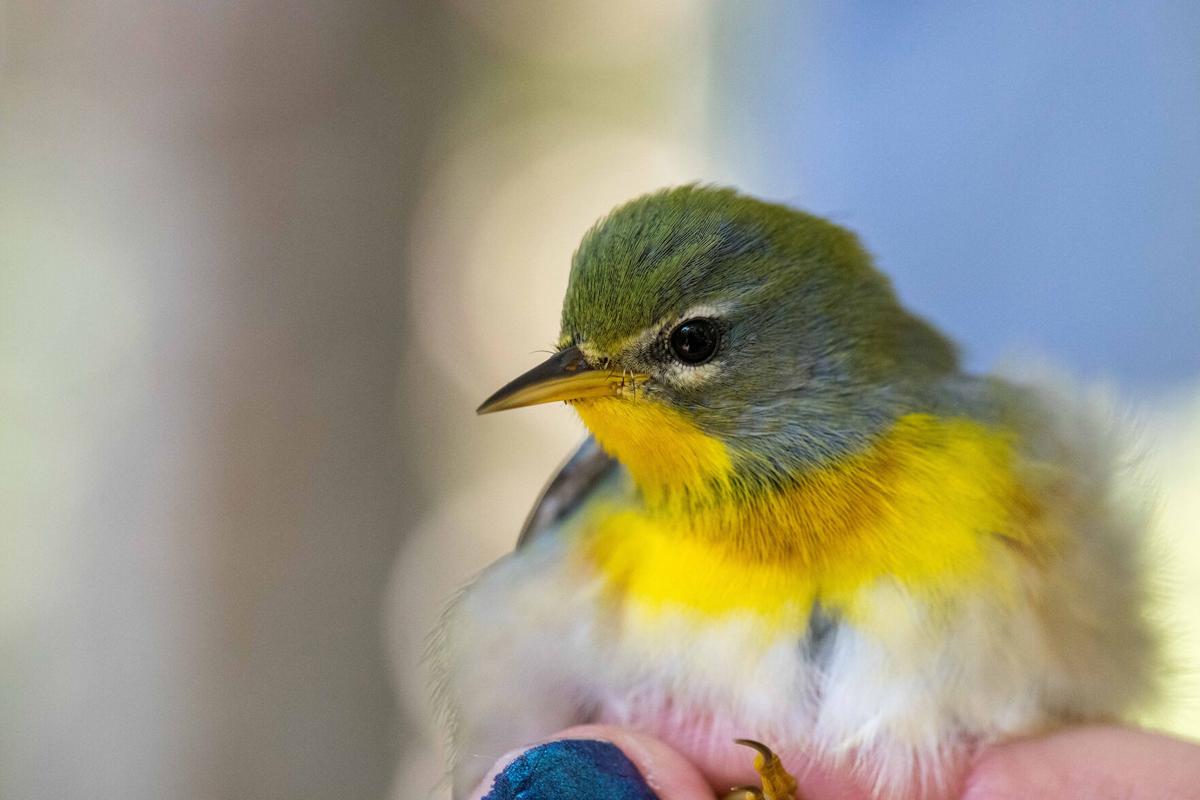 A Northern Parula is among the migratory species banded this Fall season at the Cape Florida Banding Station on Key Biscayne. 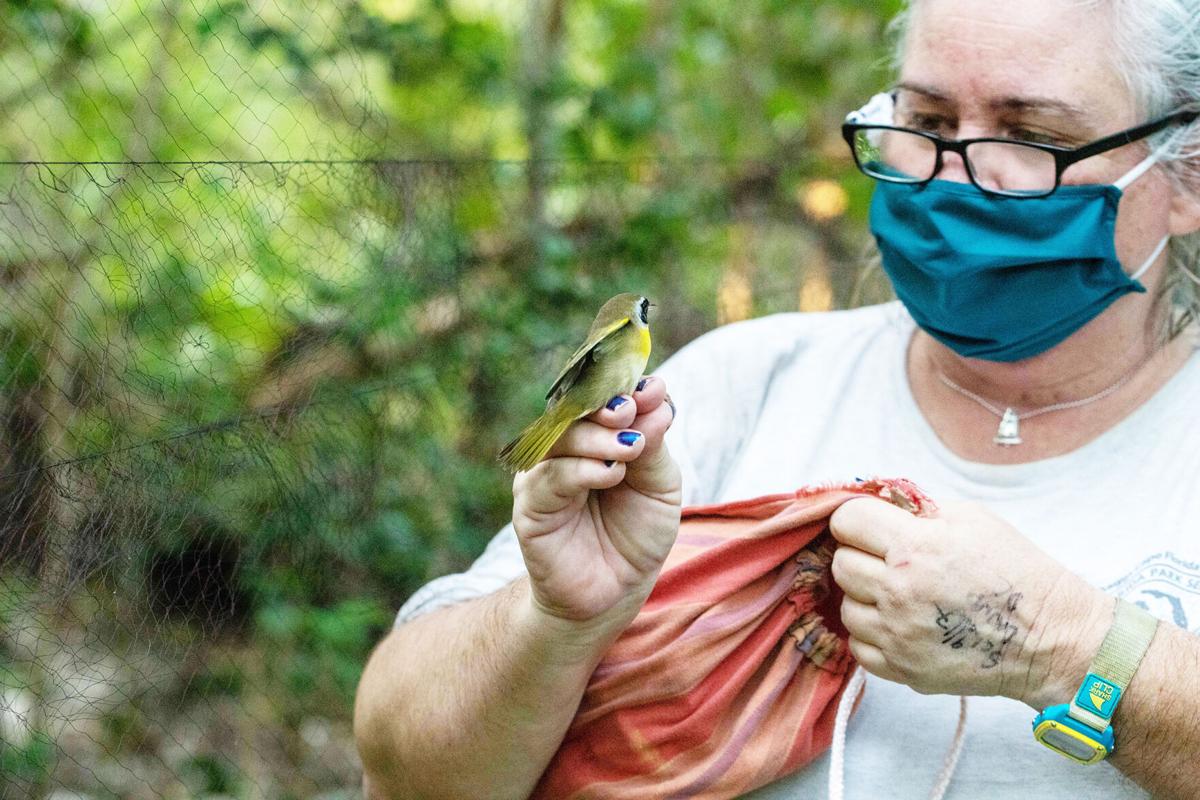 Michelle Davis could be considered a bird whisperer, having intimately interacted with these feathered wonders for two decades as Cape Florida Banding Station director; here she observes a Common yellowthroat Warbler before it is banded and released.

Tropical Audubon Society and the Cape Florida Banding Station are coming together to nurture and grow one of South Florida’s longest-running Community Science programs. The collaboration is intended to ensure that the Banding Station’s vital work will continue for generations to come.

Our region is a key stopover for migrant songbirds using the Atlantic Flyway in spring and fall. Through this newly hatched initiative, the Cape Florida Banding Station (CFBS) will now be included in Tropical Audubon Society (TAS) programming, which will help facilitate a deepening of scientific research and an expansion of public outreach and education about South Florida’s avian visitors.

TAS Executive Director Paola Ferreira is excited to take CFBS under TAS’s wing and welcomes the opportunity to collaborate with ornithologists and researchers, inform the advocacy TAS engages in to conserve and restore South Florida ecosystems, and secure long-term sustainability for the critical work CFBS has undertaken over the last 20 years. “We want to build upon the long-term monitoring data that highlights the importance of protecting native habitat for migrating songbirds, especially within Miami-Dade’s urban areas. Such information is also crucial to understanding impacts of climate change on

Michelle Davis, who cofounded the station and oversees it, believes working with TAS will help further engage the area birders who have long supported the station’s work, along with better educating the broader local community via TAS’s established messaging channels.

“People love songbirds!” enthuses Davis, who holds a PSM in Environmental Policy and Management from FIU. “Sharing the adventures and wonders of migration is an excellent way to generate public interest in conservation. Birds’ epic travels throughout the Western Hemisphere can also resonate with human immigrants to our area, reconnecting them emotionally to their native countries. Valuing one’s own home is the first step in growing a conservation mindset,” she says.

Every fall, millions of songbirds fly south down the East Coast along the Atlantic Flyway on their return trip to wintering grounds in the Caribbean and South America.

A great many stop to refuel at Bill Baggs Cape Florida State Park (BBCFSP). Here in this natural oasis at the tip of Key Biscayne, CFBS volunteers have been banding these neotropical migrants during Fall Migration since 2002, from mid-August through the first week of November.

Bird banding is the practice of capturing a bird, placing a uniquely numbered aluminum band around its leg and then releasing it. Banding enables a bird to then be identified when it is recaptured. More important, banding enables researchers to study bird migration, range, how long birds live and the impacts of climate change over time. When a bird is being banded, physical information can also be collected, including sex, age, weight and size — protocols similar to shark tagging.

Bird banding, however, is more delicate work. To safely capture the birds, 23 mist nets are set out at BBCFSP in an area covering approximately 8 acres within a restored hardwood hammock. The birds that fly into the nets are carefully extracted, banded and released.

The data CFBS gathers helps scientists understand songbird migration patterns, and underscores the importance of the park’s restored native hardwood hammock to these migrants. It is ideally located in one of the state’s most valuable Important Bird Areas (IBA) for migratory birds, and it yields crucial data that has been informing researchers, the public and civic leaders for nearly two decades.

The CFBS was established in 2002 to complement these restoration efforts. “The Station’s existence has enabled us to document and monitor the diversity of bird species that use the restored habitats,” she continues. “The high number of species is one measure of the success of the park’s restoration, and the data the Station generates emphasizes the value of this state park to wildlife locally, regionally and internationally.”

Since its founding, the CFBS has operated with a Federal Master banding permit, State banding permit and Park research permit, and has banded more than 30,000 birds representing 114 species, with an average of 1,900 birds banded every fall. Neotropical migrant warblers, vireos, thrushes, buntings, catbirds and flycatchers make up the majority of the species banded.

The Station’s important research work meshes organically with the TAS Mission and methods: To conserve and restore South Florida ecosystems, focusing on birds, other wildlife and their habitats, with outreach centered around education and advocacy.

● Inspire and cultivate a connection with the natural world for children and adults through telling the story of bird migration;

● Introduce local citizens to scientific ideas and methods, and provide training for those interested in pursuing careers in field biology/ornithology;

● Increase participation of women and people of color in science and conservation.

In addition to forging its new relationship with TAS, the CFBS will also maintain its longtime partnership with BBCFSP, which provides logistical support. Data collected at the Station has been used to illustrate the utility of the park’s restored native habitats to migratory birds, as well as contributing to the park’s species list.

Enhancing community awareness of, and education about, bird migration along the Atlantic Flyway is key to helping South Floridians understand the geographic and environmental importance of where they live, work and play. Being captivated by the wonders of bird migration can also spark a lifetime appreciation of the natural world.

For more information about the Cape Florida Banding Station visit their website: https://capefloridabandingstation.wordpress.com/