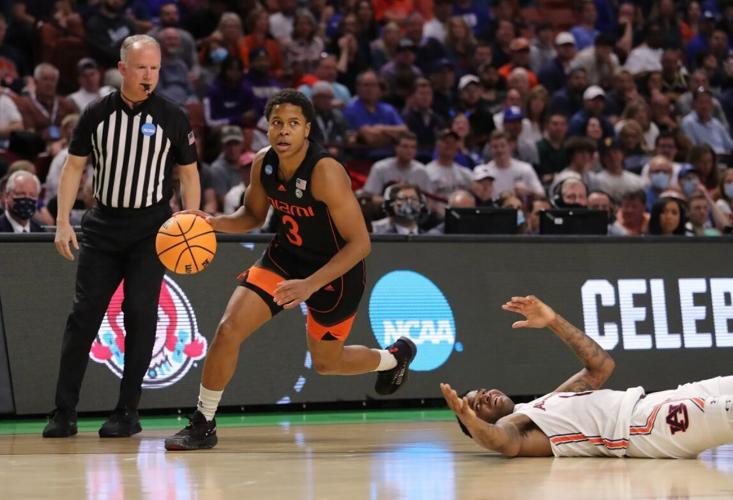 Moore’s eight assists are good for the co-second-most in an NCAA Tournament game in program history. 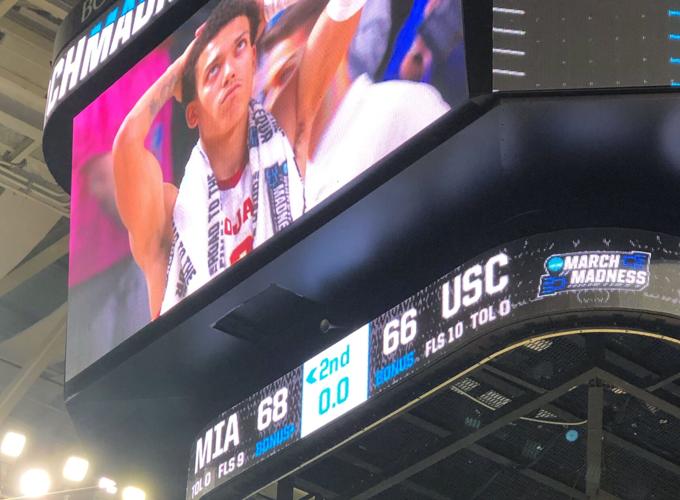 Moore’s eight assists are good for the co-second-most in an NCAA Tournament game in program history.

The story this week is the Miami Men who have advanced to the Sweet Sixteen in Chicago, but I would be remiss in not giving the LadyCanes their due. In an All-Florida matchup, the #8 seed UM Women faced off against the #9 USF Bulls. With a total team effort Miami (21-13,10-8) earned a 78-66 win. Five players scored in double figures, ten players made buckets and ten had a rebound in Head Coach Katie Meier’s 400th career win.

The overall #1 South Carolina Lady Gamecocks were up next on their home court, the Colonial Life Arena in Columbia, SC. Miami held S Carolina to 49 points and limited them to a 29.5 shooting percentage. Both were season lows for the hosts.

The LadyCanes fell 49-33 in the contest but can hold their heads high after impressive defensive play. South Carolina might well go all the way in the Tournament.

I had stopped in Columbia Thursday afternoon to watch the UM practice and I’m glad I had the opportunity to wish all Miami players well.

On paper this was a mismatch. Southern Cal has seven players 6’9” or taller. UM has one player over 6’7”. Miami Head Coach Jim Larranaga asked his players to “embrace the moment” and “visualize playing great and winning”. Coach L added “their shooting guard is 6’9” and can play the point, they’re going to be a handful for us but we’re also a handful for them”.

Miami was sharp early. Isaiah Wong scored UM’s first 13 points on the way to a 13-9 lead. The Canes stretched the lead to 31-20 at the half.

The Trojans came out on fire in the second frame cutting the deficit to five in the first 35 seconds. Miami was unfazed and built the lead back to 8 before USC exploded for a 12-0 run that put them up 4 with 5:18 left.

Charlie Moore responded immediately with a long 3 and a layup and free throw and the Canes were back up two. Miami extended to 65-58 with 0:44 and it was looking good before Drew Peterson hit consecutive threes and a layup sandwiched around a Sam Waardenburg free throw and it was 66-66 with 0:14 remaining. Moore was fouled with 0:03 and calmly made both from the stripe for the 68-68 final tally.

Peterson put up a half court shot for the win that would not go and Miami were on the way to the second round to play the No. 2 Auburn Tigers.

Miami plays the game like no one else. They play a “Scramble” defense where they trap ball screens, rotate and pressure the ball. The Canes are relentless on defense and take care of the ball on offense.

So how did UM prevail?

The Scramble, when executed properly by players that fit into the system is how! Miami turned USC over 18 times that led to 22 points. Miami only had 3 turnovers that gave S. Cal 5 points. Miami had 12 steals and their pockets were only picked once. The Canes are such a great team to follow. They always root for and pick each other up. They make me forget about the $234.77 I paid for gas on my 1532 mile journey.

As important as the three guards scoring was, Miami could not have won without Waardenburg and Jordan Miller’s play against USC’s bigs. When Wong fouled out Anthony Walker gave the Canes great minutes on on both ends.

Sunday night came and No. 2 Auburn was on the calendar. The oddsmakers made the Tigers a heavy favorite. Auburn features 6’10 Jabari Smith who will likely go first or second in the NBA draft and another lottery pick , 7’1” Walker Kessler.

The “Scramble” did the job again. Auburn Head Coach Bruce Pearl said, “we hadn’t been hit in the mouth like that all year” and added, “Miami is a nightmare to defend”.

The Canes never trailed against Auburn. The closest they got was down 33-32 at the half. Miami dominated the second half out scoring the Tigers 46-29 on the way to a 79-61 final score. More of the same for UM’s defense. Canes had 10 steals, Auburn one. Miami had only 4 turnovers while forcing 13. Miami 30 fast brake points, the Tigers only one. It goes on and on.

Miami is a team the likes of which we never see. Coach L and his staff identify their own deficiencies and find a way to turn them into advantages.

Moore had an unreal game. 15 points, 9 rebounds, 8 assists and 3 steals. Coach L said in a pregame press conference when asked about Charlie, “normally when a new player comes in we try to get him to adapt to our system, with Charlie we learned quickly that the system best adapt to him”.

Wong was high scorer with 21, McGusty had 20 and Miller 12. When asked how they were able to hold Smith and Kessler to a combined 12 points on 3-22 shooting Coach L responded, “Well when you play against great players and you’re analyzing their game, there are certain things that repeat themselves, and in Jabari’s case, he’s not only 6’10” and extremely athletic - he had 15 rebounds tonight-he’s a great shooter. And shooters like space and rhythm. We needed to take that space and rhythm away. Jordan Miller was on him, denying him, making him take a step further out. When he went to the post we doubled him from behind. So Jordan would try to straddle him,and if Jabari caught it you’d see Charlie Moore and Isaiah Wong go after it and try to disrupt him. That’s the whole key with shooters. If you let them get into a rhythm.

Jabari could have made ten threes tonight if he was in rhythm, but we try to take them out of rhythm”.

The play of the night was Wong’s dunk on Jabari. When asked Zay said “I was coming off a screen and they were icing it a little bit. So I just came in and snaked it and I had an open lane. I was imagining dunking it, and I came in and got my two steps in, and I was in the air. I saw big man trying to jump with me. I was like, ooh, I hope he jumps with me, and he did, and I dunked it. It felt like an amazing experience when I did that”.

Coach L opened the post game press conference with this nugget, “Well, to begin with, I was tuned into the games before us, and I listened to Charles Barkley tell the CBS crew that if Auburn won he would take off his shirt, and I thought to myself, man, no one wants to see that, Chuck? (Laughter) So we did everything possible to make it possible that he wouldn’t have to do that.