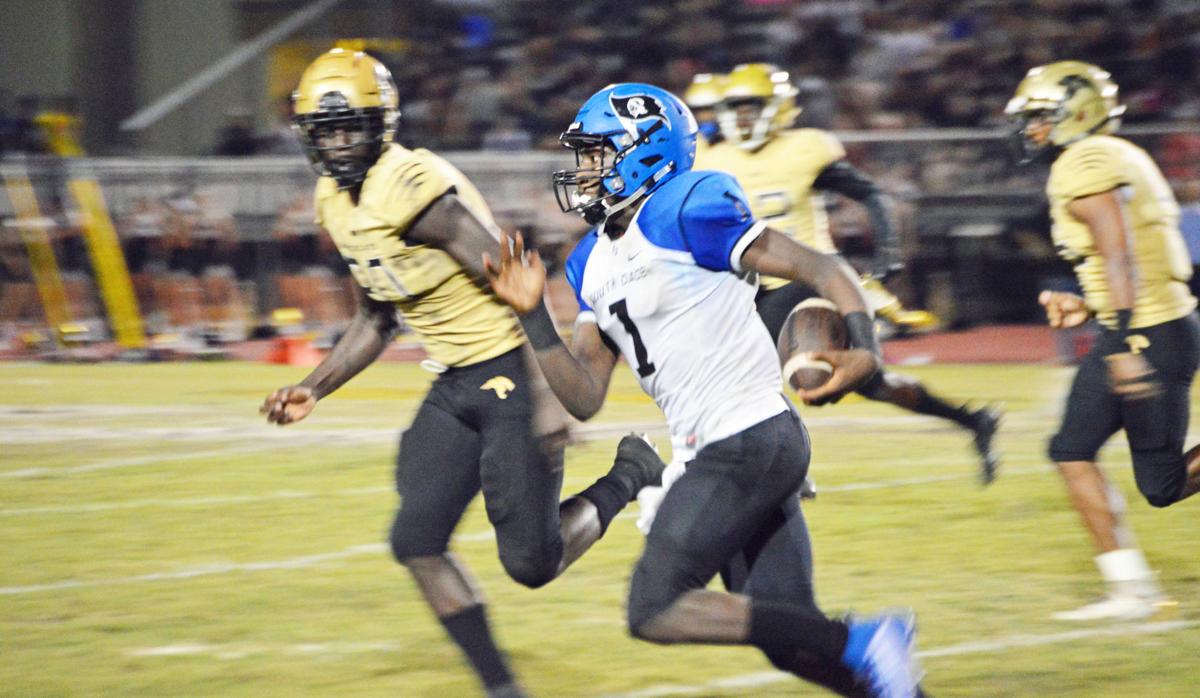 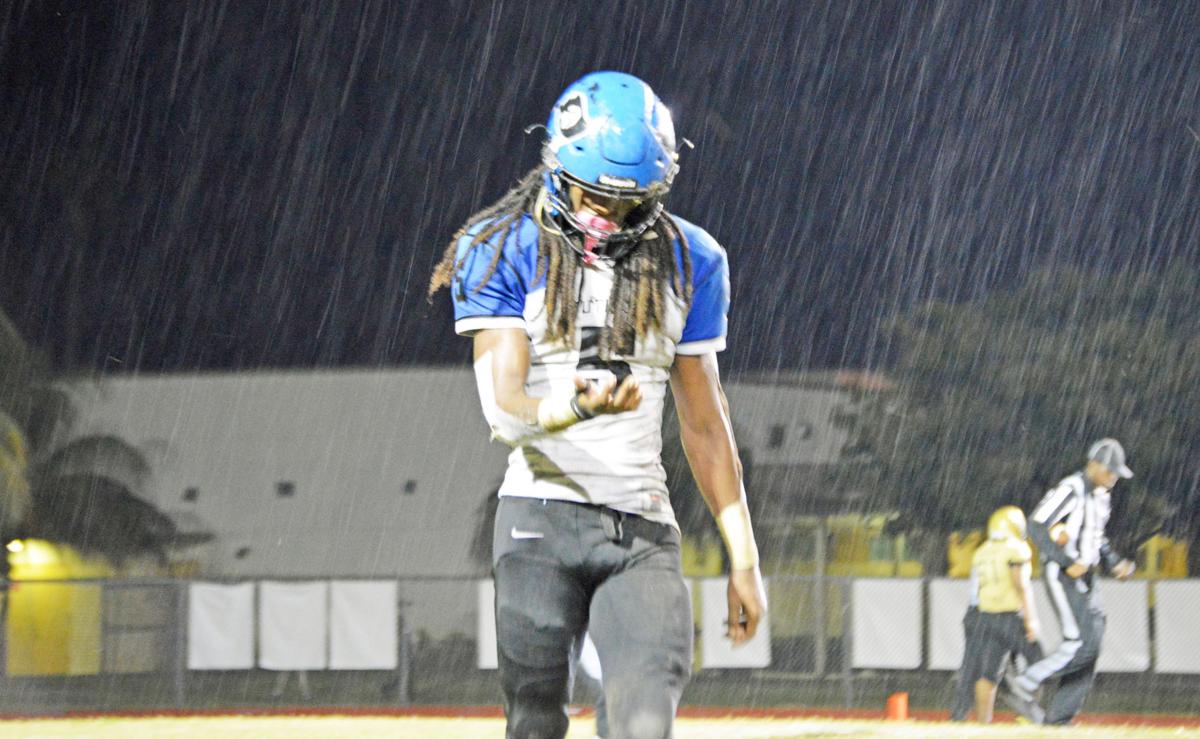 Keshawn Washington, in the pouring rain. 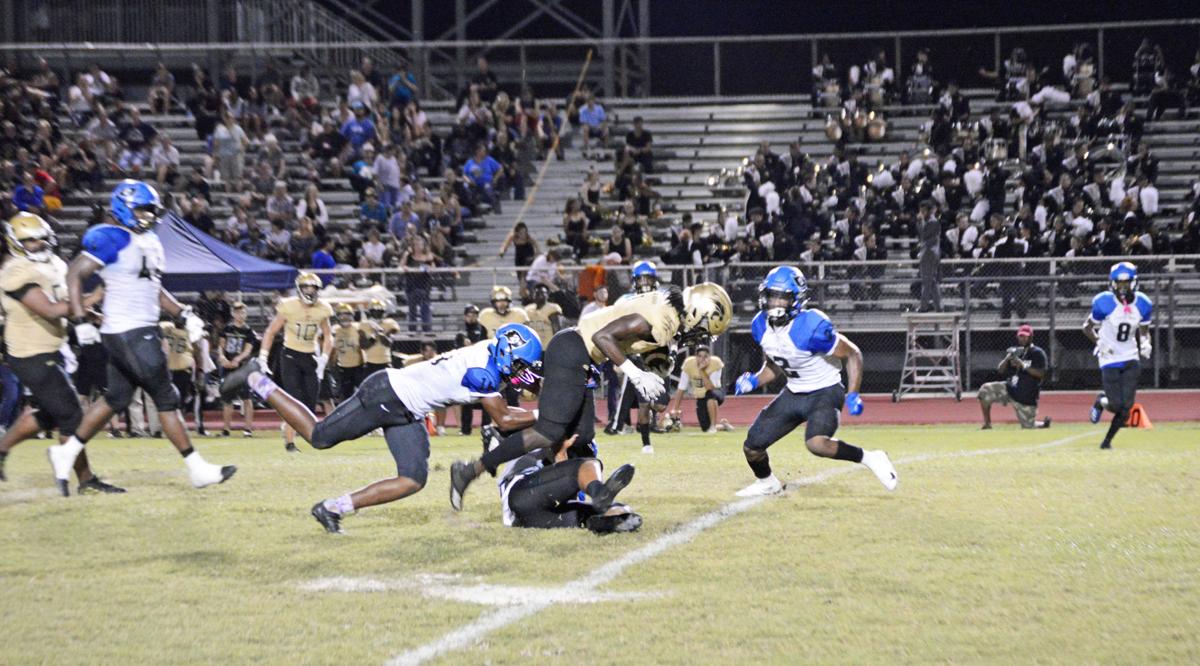 Keshawn Washington, in the pouring rain.

The South Dade Buccaneers roared out to a 7-0 start to the season and were ranked as the top team in Class 8A.

The goal of winning the school’s second state title was in their sights.

However, the season came to a crashing halt.

It officially ended in the regional quarterfinals with the Bucs’ fourth consecutive loss, falling 43-20 loss at the hands of Davie Western in a game the Bucs led 14-7.

“It hurts because of the fact we showed so much promise coming out of the gates and sustained it for an eight-week run and then holding the No. 1 ranking for the longest so you look at those positives knowing that we had the capabilities,” South Dade head coach Nate Hudson said. “Ultimately at the end some of the things we felt we could have done better, betrayed us.”

Meanwhile, the Bucs were held to 241 yards and racked up 13 penalties for 121 yards.

“I think we minimized them down to really one play,” Hudson said. “All of the

adjustments we made just trying to fight to hang in there. For whatever reason we just couldn’t get the offense going.”

Kelvin Durham completed 9 of 18 passes for 158 yards and two touchdowns with one interception. He also rushed for 51 yards on eight carries. He finished the season with 1,641 yards and 23 touchdowns in nine games.

“It’s a good group in terms of the talent,” Hudson said. “They’ve got some things they can work on and they understand that, but we knew the ’20 class was going to be extremely talented.”

South Dade led 14-7 behind touchdowns by Mathews and Thomas with a minute left before halftime.

However, Western’s Omar Simpson scored his second touchdown of the half on a pass from Collin Hurst and the game was tied at 14 at the break.

The momentum for the Wildcats carried over into the second half, outscoring the Bucs 29-6 after halftime.

“I like the way we came out, the spirit was good,” Hudson said.

“We had a heck of a week in practice. Things are going to happen throughout the game, but you also have to have the mental focus to sustain it. Ultimately at the end we came out of the second half that we kind of knew if we could have gotten a score it could have made a difference.”

Western’s Miles Friday used his speed to the outside to run past the Bucs’ defense on his way to a 46-yard touchdown, giving the Wildcats a 28-14 lead late in the third quarter.

Not only did it give the Wildcats the largest lead of the game for either team, but it proved to be pivotal because the Wildcats elected for an onside kick on the ensuing kickoff and recovered it. One of South Dade’s top receivers Freddie Bruce was knocked out of the game on the play too.

Although Western was not able to score on the extra possession, they pinned the Bucs back on their own 11 on the following drive and were unable to move the ball, giving the ball back to the Wildcats, who scored on their following possession for a commanding 36-14 lead with 5:44 left in the game.

Bruce was not the only the Buc to suffer an injury. Defensive end Tyler Johnson, one of the team’s best defensive players throughout the season, exited in the first half. Washington played through a noticeable limp throughout the second half, Battle was also battling through an injury, Snead had his night end early, and defensive tackle Tanaveius Shropshire did not play the final two games.

“I think that illustrated everything especially down the stretch,” Hudson said. “We’re not going to make excuses. We still have guys to go out there and compete. That was just an unfortunate thing that happened to us and we dealt with it the best we could.”