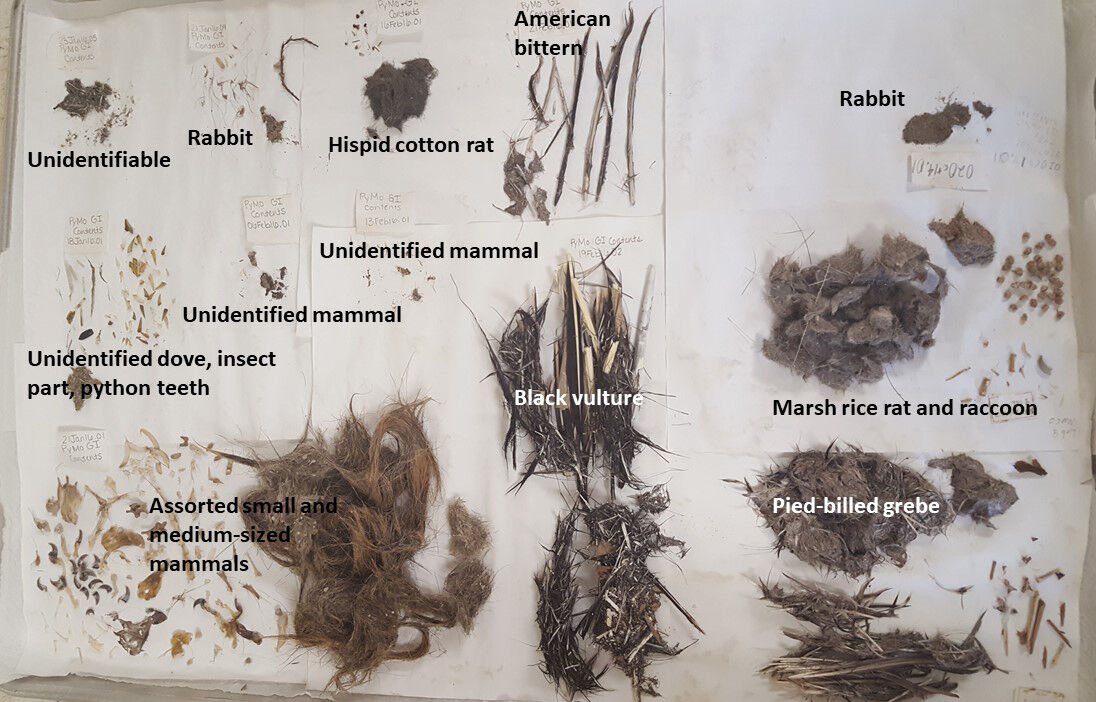 A sampling of what the Romagosa lab finds inside a python’s gut. These gut contents were extracted from pythons caught all over Florida. 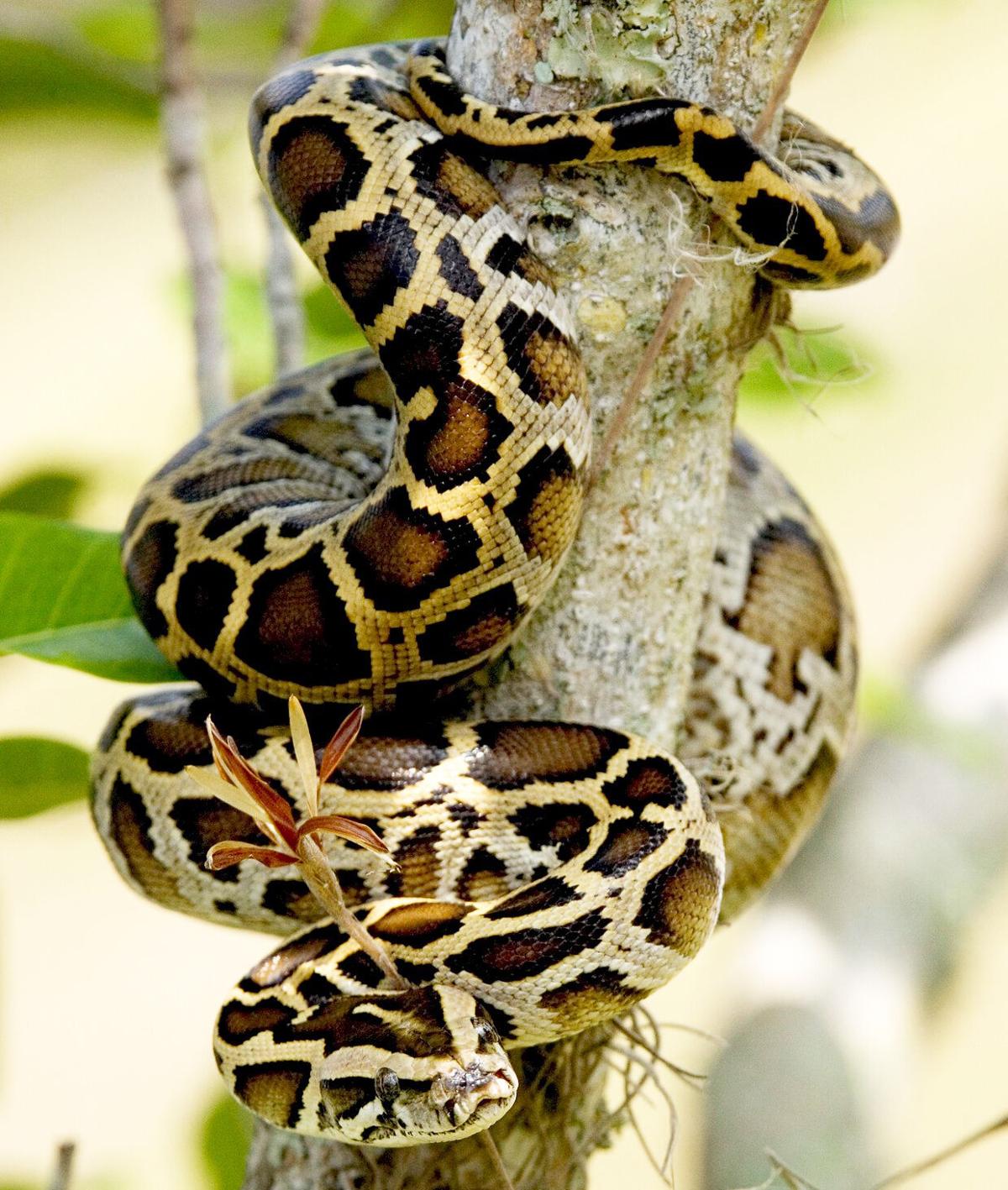 Dr. Romagosa studies what’s inside invasive Burmese pythons and uses that information to see how they are affecting the wildlife in Everglades National Park. 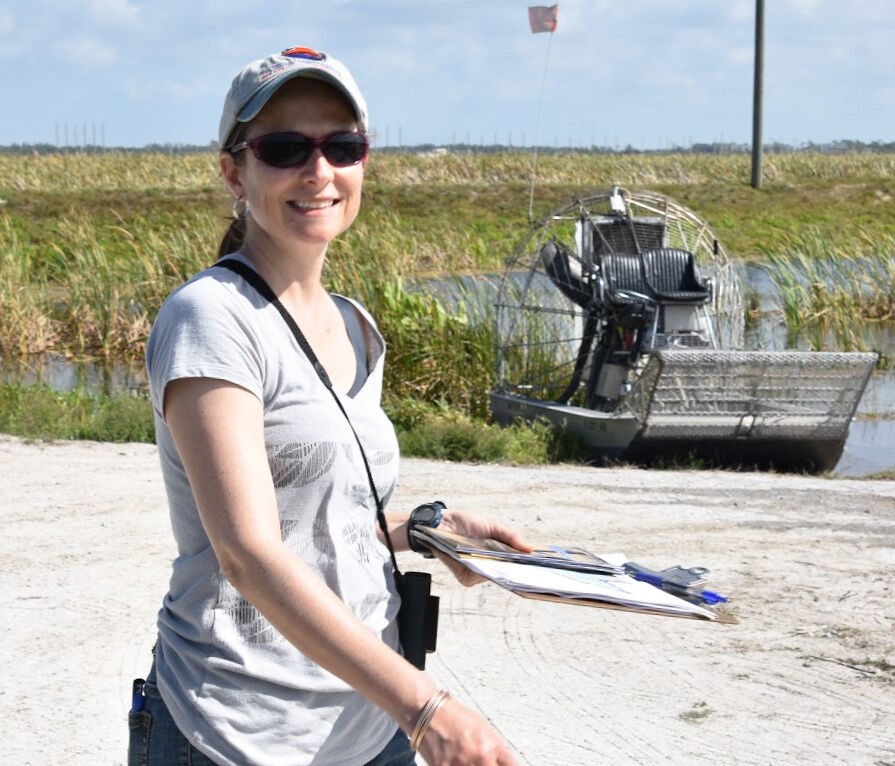 Christina Romagosa in the field, wearing her usual hoops and bracelets. She said she only takes those off when working with pythons because “they curl their tails around them.”

A sampling of what the Romagosa lab finds inside a python’s gut. These gut contents were extracted from pythons caught all over Florida.

Dr. Romagosa studies what’s inside invasive Burmese pythons and uses that information to see how they are affecting the wildlife in Everglades National Park.

Christina Romagosa in the field, wearing her usual hoops and bracelets. She said she only takes those off when working with pythons because “they curl their tails around them.”

Dr. Christina Romagosa is a research associate professor in the University of Florida’s Department of Wildlife Ecology and Conservation in Gainesville, Florida, but much of her work is in South Florida.

Her research focuses on how ecosystems respond to invasive species, or non-native species that do harm to the ecosystem. Growing up in southern Florida, Christina loved the birds and reptiles she saw in her backyard, and science always interested her as a career. But because of a lack of role models with her ethnic background, she had some hesitation.

She overcame that doubt thanks to continued support from her parents and mentors and after being encouraged by another Latinx scientist’s success in Ecology. Today some of her research focuses on invasive Burmese pythons in Everglades National Park—especially what’s inside them.

Christina and I recently discussed her lab’s current snake research projects focused on diet and lung parasites, and she provided me with some insight into how to succeed in science. Read more below.

A lot of your research involves work in Everglades National Park. How did you get involved with that?

I started working in Everglades National Park because I’m from South Florida and the ecosystem here is special to me, and unfortunately there are several invasive species here. We need to understand how invasive species affect the Everglades ecosystem, especially within the restoration context.

So what is it about pythons that got you hooked?

If you had told me years ago that I would be working with pythons, I would have laughed. My first love was birds. I started working on pythons because I’m very interested in invasion ecology. I wanted to learn more about how this top predator, the python, can affect all the fauna [animals]. This one animal can affect the birds, can affect the mammals, and can have some effect on the reptiles.

What happens when the Burmese python is present and how does that change the Everglades ecosystem? Taking a step back, did you always know you were going to work in science?

Being from South Florida, I grew up seeing a lot of vertebrates [animals with backbones] here that are not native. [As a child], I realized that the brown anoles all over my house were not native, and we also had these [non-native] monk parakeets around my elementary school. So I’d say that my connection to South Florida is originally how I got interested in invasive species.

In college, I hadn’t come across any well-known biologists that came from my ethnic background and that made me feel a little alone. My undergraduate biology textbook had these interviews with eminent biologists at the beginning of each unit. When I read Ariel Lugo’s interview, I found it amazing that he was Puerto Rican and featured in the Ecology section. I’m Cuban and I had never met anyone else with a Latinx background that had success in the field of Ecology. It was very motivating.

And now you can be a role model for your students.

I never think of myself as a role model, but it makes me so happy to have students pull me aside to say that my being here makes them feel like they can do this because we have the same ethnic background. I’m their Ariel Lugo!

Back to your research, I’ve read about some of your studies on python diets. Can you tell me more about what motivated that work?

When we started this project, people had knowledge of the python diet. We knew that the majority of their diet was mammals. But we wanted to document and identify those animal groups that are most at risk of predation. Also, the insertion of a predator like a python into any ecosystem could cause changes in the food web called trophic cascades. We wanted to answer questions such as: How does an invasive species affect food webs in the greater Everglades? Does the python diet vary across space and time? Believe it or not, these are difficult questions to answer because of how, when, and where pythons have been captured over time.

How did you get the pythons for your python diet project?

I work with the US Geological Survey (USGS) and the National Park Service, and as part of the collaboration, I receive pythons that are brought to the park after they are caught either on or near park lands. USGS and park scientists

perform necropsies [an autopsy of an animal] and extract the gut contents.

They then send a subset of those samples to me. At our lab, we and undergrad volunteers, including Mariaguadalupe Vilchez and Maria Suarez, clean the contents so we can see the structures better and find out what those pythons ate. We find hair, teeth and feathers, and the animals are identified visually from those structures by looking through a microscope. Most of our bird samples [feathers, bones, and beaks] have been identified by Carla Dove at the Smithsonian institution. Our mammal samples [hair, teeth, and bones] have been identified by lab members Eric Suarez and Diego Juárez-Sánchez.

Identifying by eye seems difficult. You never use DNA?

Project collaborators at USGS tried to extract DNA and it didn’t work. We don’t really know what’s going on, but if you are extracting diet contents from a python’s lower gut, the DNA extraction doesn’t work. We think that the python stomach must be really acidic and that completely degrades the DNA. You can get some DNA from the stomach contents but anything lower than that [the intestines], we haven’t been able to get any DNA product out of it. There might now be newer methods that will allow us to do it, but all the gut content work in our lab so far has been done by visual identification.

What have you found in the pythons’ guts?

Pythons have a pretty broad diet, but within the lower part of Everglades National Park, such as in the Mahogany Hammock and Flamingo areas, pythons are primarily eating rodents like hispid cotton rats. Depending on where the pythons come from, we’ll find other mammals like opossums, wading birds, alligators, and we’ve even gotten iguana. We are getting ready to publish the full results, so you’ll have to check back soon. I can also give some results for another project we just finished. Pythons here have this crazy lung parasite that’s native to Asia and they’ve brought it over to Florida.

Whoa. Tell me more about this crazy lung parasite.

It’s a pentastome species, Raillietiella orientalis, and is actually more closely related to crustaceans [like sea lice] than nematodes [worm-like parasites]. One of my former graduate students, Dr. Melissa Miller, led this project for her dissertation research. She did a lot of road cruising [driving at night] to look for dead-on-road native snakes and pythons, and then dissected the snakes to look for the lung parasites and found them. We just published a paper that shows many snake species native to Florida are highly susceptible to infection from this parasite.

Do you know how native snakes are affected by these pentastomes?

Last question. It can be hard to make it in science, but you’ve found a way to do cool work on an interesting organism. Do you have any advice on how to be successful in research?

The connections I made by talking and listening to scientists at conferences have been really important. So what would I recommend? Make strong connections, listen, be trustworthy, and do good science.

For more on Christina’s work, see her lab’s page: https://sites.google.com/site/christinamromagosa/home

Written by Antonia Florio, a Science Communications Liaison at Everglades National Park. Ever since studying chameleons in graduate school, she has worked in science education and communication. Her goal is to help people realize that they can understand and do research, and that science is for everyone. Antonia can be reached by emailing Antonia_florio@nps.gov