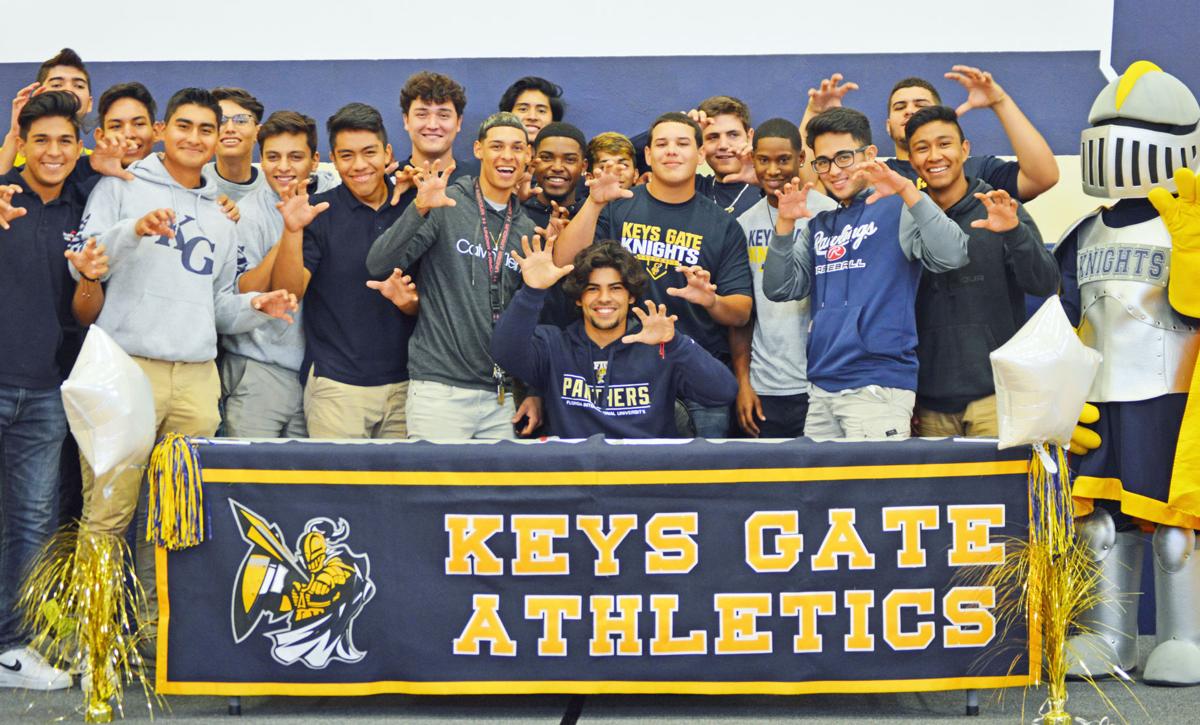 Rey Hernandez celebrates with his teammates at his signing with FIU. 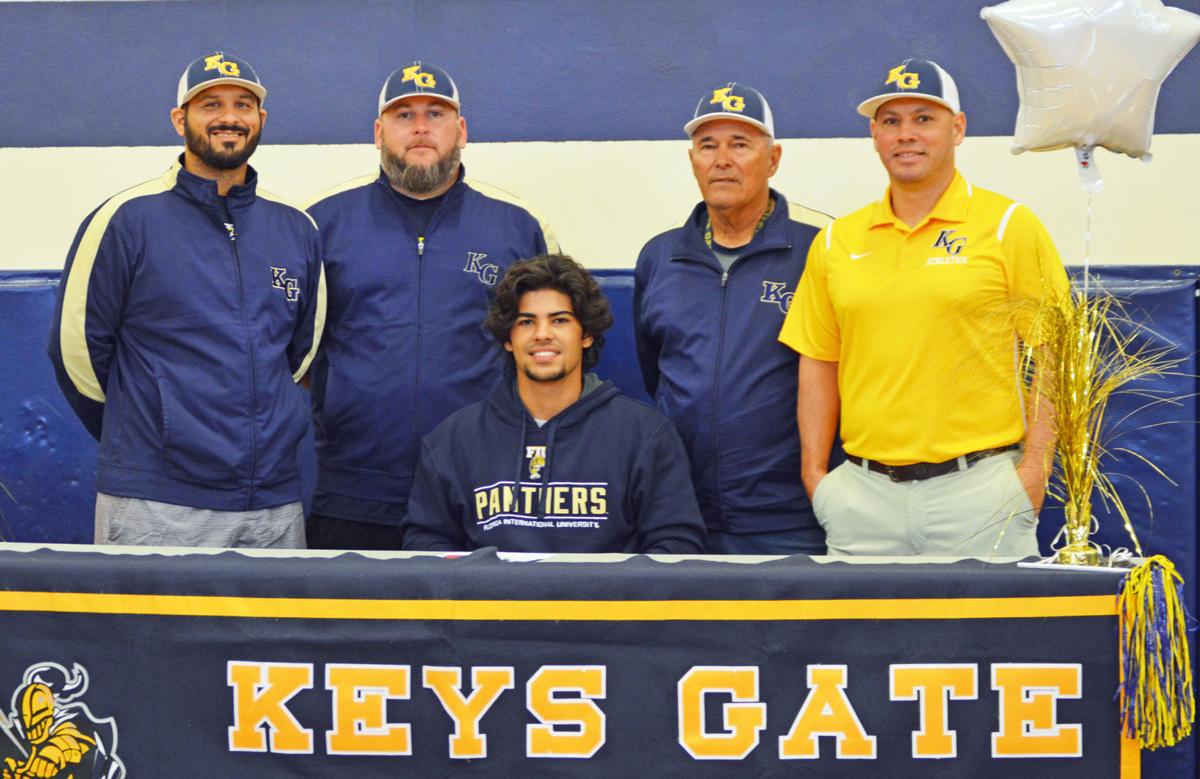 Ray Hernandez with his coaches. 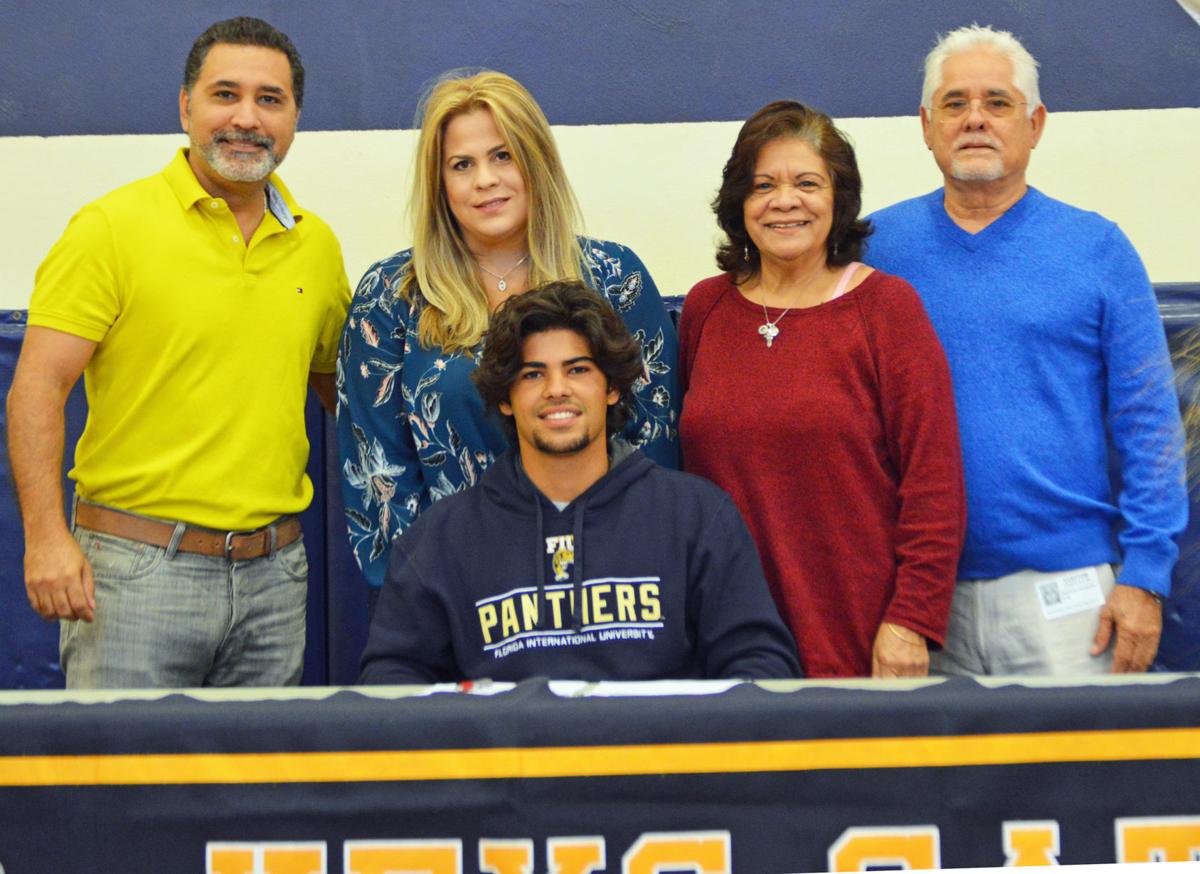 Rey Hernandez with his family.

Rey Hernandez celebrates with his teammates at his signing with FIU.

Ray Hernandez with his coaches.

Rey Hernandez with his family.

Shortstop Rey Hernandez became the first Keys Gate baseball player to sign with a Division I program when he signed a letter of intent to attend FIU.

“I really appreciate the efforts from my coaches and my parents, they’ve led me down the right path to work hard as a student and an athlete,” Hernandez said.

The school held a ceremony for Hernandez who was joined by his family members, coaches, administrators, and teammates.

He picked FIU because, “it’s a good program, a good staff, and it’s close to home.”

Hernandez began playing varsity at Keys Gate as an eighth-grader and is the school’s all-time leader in hits, RBIs, stolen bases, double, and triples.

"I think him that being here for such a long time, staying in the program and really buying into the things we are trying to preach, he is pretty much the example of what it looks like at the end," Keys Gate head coach Richard Benites said. “I think it's important especially in this day in age with sports and kids jumping around and go to four different schools. It speaks volumes of him and his family."

"He is a prototypical baseball player," Benites said. "A lot of coaches who have seen him have said, 'He's got the body of a minor leaguer already.' He’s got to have success at the high school level, which he’s done, and then it gets tougher as he goes on, but anything now is house money because he's got a scholarship to play and get a degree.”

Benites has a unique connection with Hernandez as he grew up playing baseball with his father, Marino Hernandez, since he was nine years old and into high school at Southridge.

“We’re friends and sometimes we’ll talk on the phone until midnight, 2 o’clock in the morning going over games and just talking,” Marino Hernandez said. “I don’t regret it one bit (with Rey playing at Keys Gate). I think it was the best decision because playing baseball for your family is different than playing baseball for your coach and this has been tight. It’s been more of a family thing than anything else.”

Marino Hernandez is proud of his son’s accomplishments.

"I'm really proud of him,” Marino said. “When you see one of your kids take the next level, all of the hard work you put in and everything you're reaping what you sow. I'm just proud of him. Every coach he's every played with they've always said nice things about him. He's a guy they like and want on their team and to me that's the most important. He's a good kid, he's a good player, and he's put in the hard work. Everything is coming together."