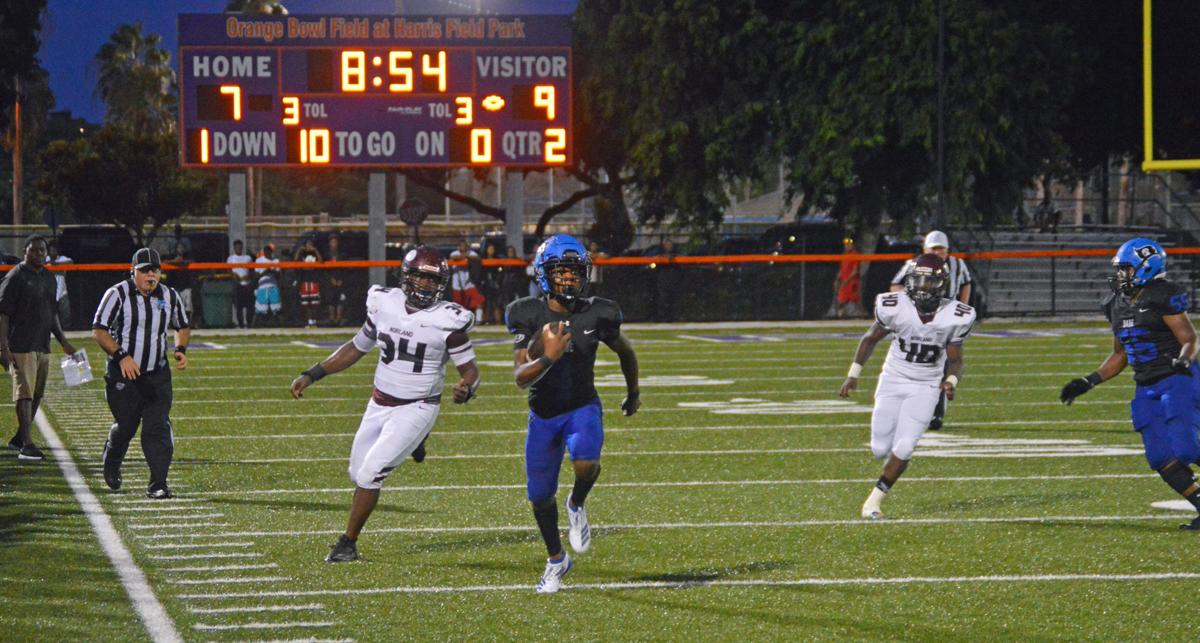 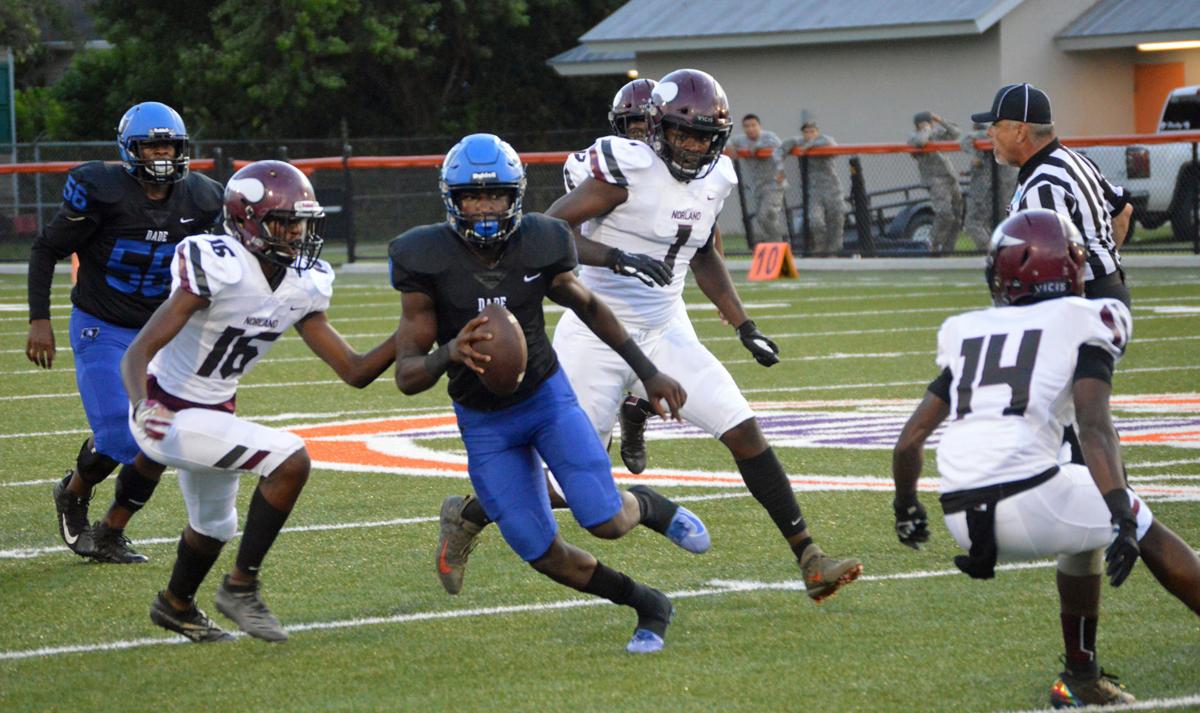 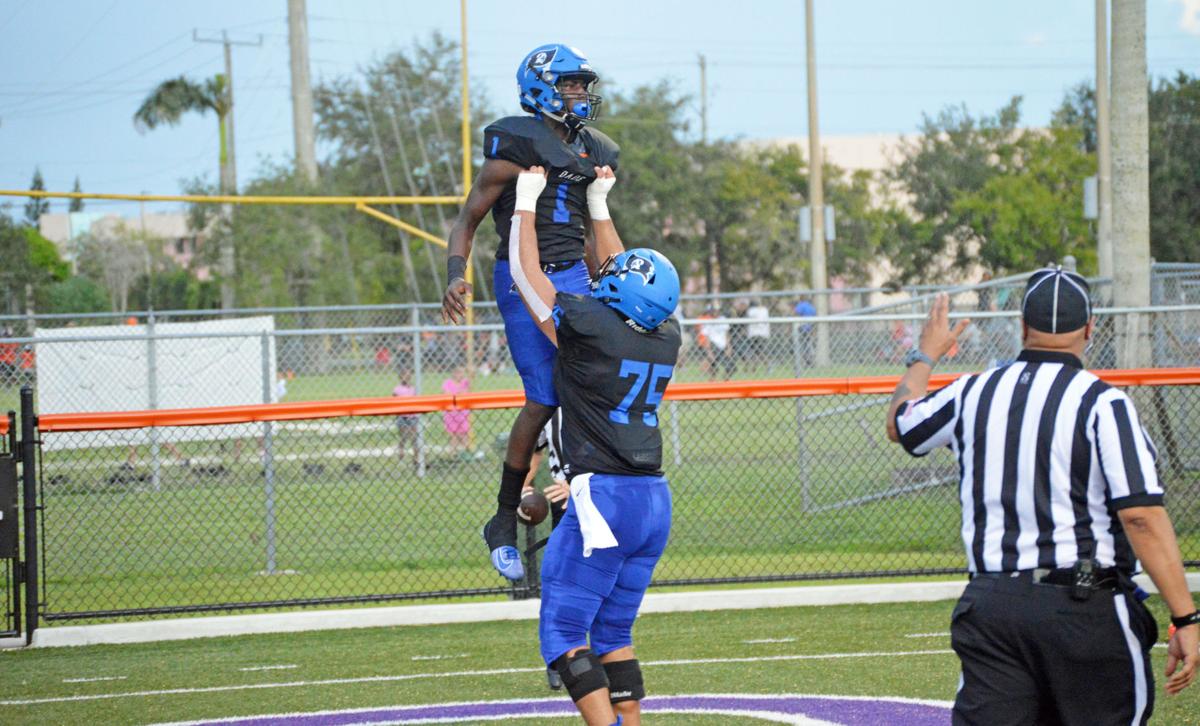 Chezzy Mathews provided the Bucs with energy, big plays, and most

Mathews rushed for 140 yards including a four-yard go-ahead touchdown run with 2:23 left to lift the No. 1-ranked South Dade Buccaneers to a 35-32 comeback win over Norland.

“We had to come out victorious, we can’t let that number 1 spot go to waste,” said Mathews, who has been deemed as the heart and soul of the team.

28-yard fumble return. Battle rushed off the edge and scooped up the loose ball dropped on a hand-off exchange.

"I thought it was Christmas,” Battle said. “When I saw that ball I had to take it to the crib. My team was counting on me. They stayed by my side when I messed up a couple times. They didn't doubt me, they kept my confidence up and I had to do it for them. I had to do something to get our offense back on the field."

Mathews punched it in on his 21st carry and the Bucs’ defense held up on the following possession as the Vikings (1-2) had their drive stall at the 50 following an incompletion, keeping South Dade (4-0) unbeaten.

“We knew it wasn't going to be easy, but this defined character,” South Dade head coach Nate Hudson said. “You're going to be battle-tested when you're on a quest to win a state title and this magnifies it more with what we're trying to do and our goals and we understand it's not going to be easy. I think tonight they realized that."

South Dade scored on its first possession of the game, grinding out a 10-play, 47-yard drive ending with a Durham touchdown. However, two mishaps on punts, allowing a tipped pass going for a score, and a steady rainfall led to 13-12 lead at the break, which was quickly erased on the Vikings’ first play of the second half going for a 78-yard touchdown reception by Omari Stewart.

“We played lazy,” Mathews said. “We had a bad week of practice. We’ve got to do better.”

"The offense has been a roll and has been giving us hope,” Hudson said.

The Bucs trailed 32-21 entering the fourth quarter, but Durham’s third touchdown of the game—an 8-yard score—and Thomas’s two-point conversion run pulled the Bucs within 32-29 with 9:41 left.

"It was crunch time," Durham said.

Norland’s Jaden Williams, who threw for 235 yards and accounted for four touchdowns, threw an interception to linebacker Tarvarius Corbitt on the ensuing possession.

The Bucs took over at the Norland 40, but the drive stalled, ending in a deep heave into the end zone by Duram that was picked off by junior Eddrin Lollar, who intercepted two passes in the game for the first picks of the season for Durham.

Despite the interceptions, Durham made key plays on the ground finishing with 45 yards—a game after he rushed for 115.

"Running the ball is natural for me,” Durham said.

Durham’s day nearly ended early. He was replaced in the second quarter by junior Alejandro Urrea with a back injury and remained on the sideline with his shoulder pads off until returning for the third quarter after a lengthy halftime due to a lightning delay.

"I thought I was going to be out for the rest of the game, but I played through it,” Durham said.

The Bucs stayed persistent throughout the second half even though facing deficits of 25-13 and 32-21 by an unranked team not expected to pose a serious threat.

“This is was a big-time win simple because there is a bulls' eye on our chest,” Hudson said. “We recognize that and I think teams are going to be coming after us."

South Dade played without two starters in the secondary in seniors Jalin Wilson and Harry Henderson. Junior wide receiver Jermaine Hawkins, who led the team in receptions coming in, was also out with a knee injury.

The Bucs have a week off before resuming action on Sept. 26 against Coral Reef at Harris Field.