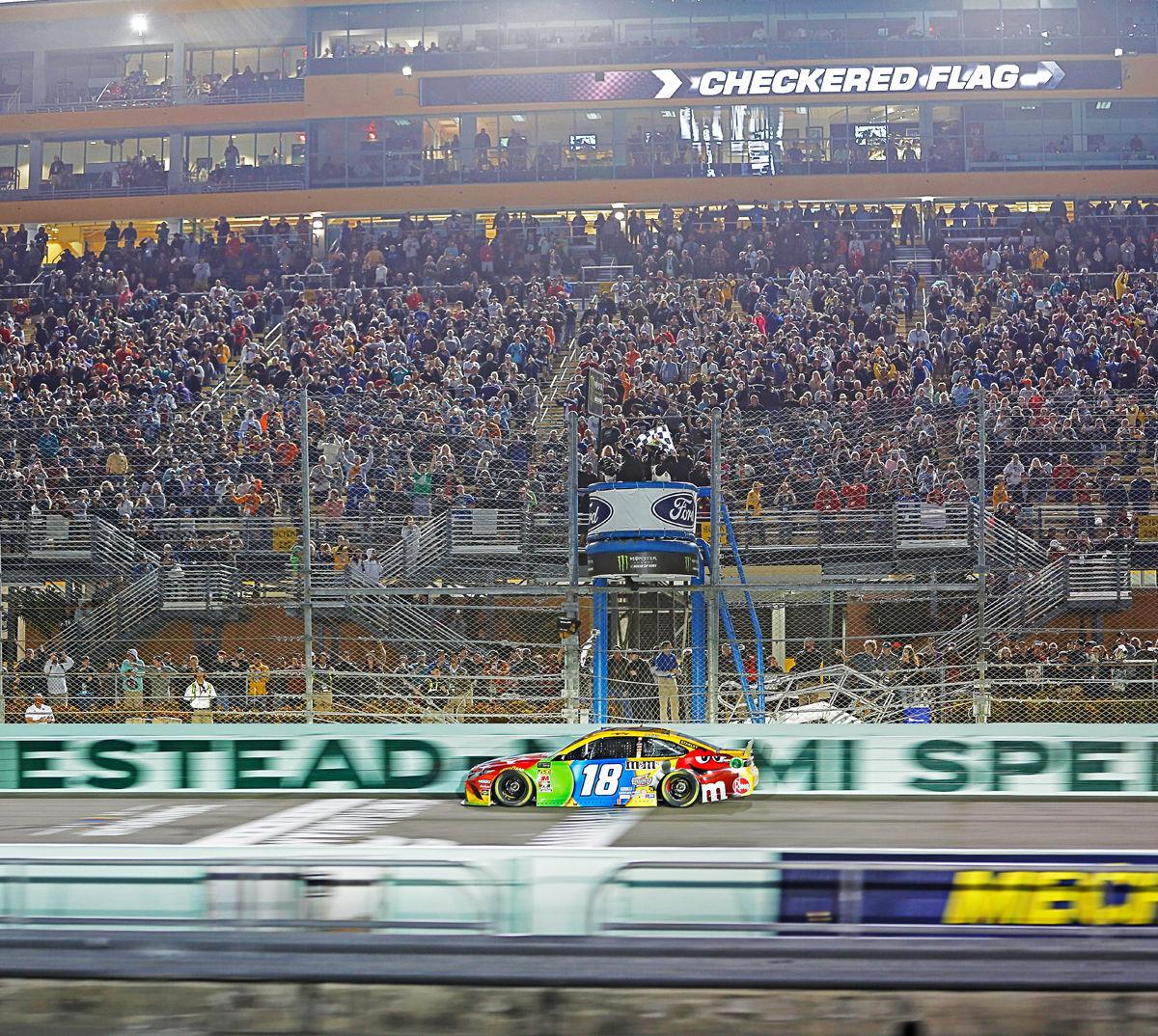 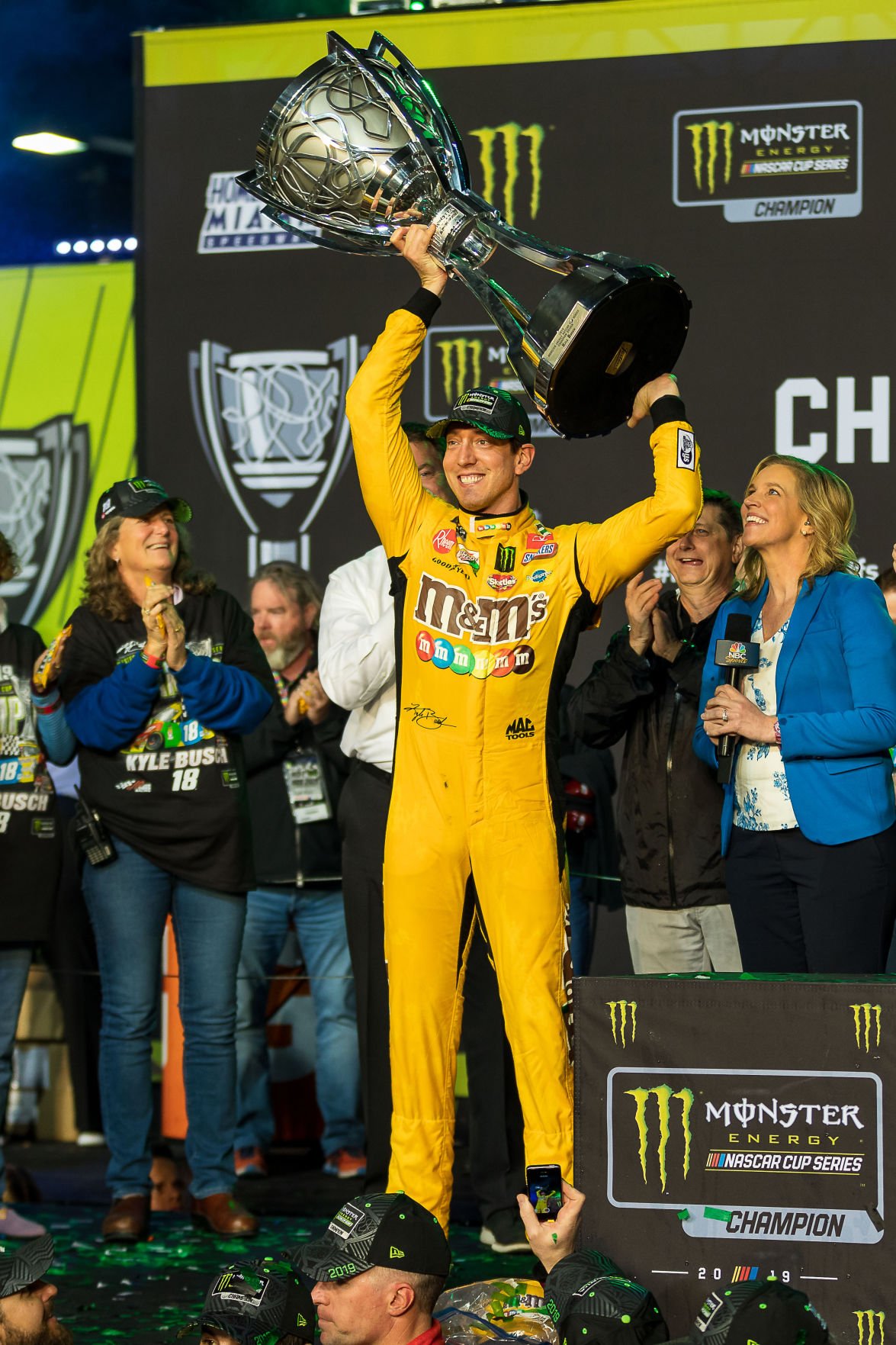 A comfortable lead down the stretch led to an emotional moment on the final lap.

"I do remember taking the white flag and crossing underneath that and I had some tears rolling down my eyes for the last lap and was just like, 'Come on, man, we've still got to finish this thing, don't be such a sis,'" Busch said.

Busch became the 16th driver all-time with multiple championships after winning the 2015 championship, also at Homestead, which hosted the final race weekend for the last time in the near future as NASCAR schedule changes moved up the races to March 20-22, 2020.

"I would like to think that any time you're able to win more races and more championships that it helps your stature and helps you become more successful, but it's all about just doing our job to me," Busch said. "I would love to be sitting here right now talking about eight. I've been in the sport for 14, 15 years, whatever this season is for me, and so we're only talking about two. It's nice to have the success that we have, take it when you get it, but there's certainly a few missed opportunities for sure."

Busch, snapped a 21-race winless streak dating back to June and gave Joe Gibbs Racing its fifth drivers' championship, led a race-high 120 laps, including the final 45, to beat out Martin Truex Jr., who was strong early, but slipped due to a pit stop error.

Kevin Harvick finished fourth and Denny Hamlin 10th among the championship 4 drivers with. Erik Jones was the highest finisher among the non-championship drivers, placing third.

"(Kyle) Larson was probably my biggest pain in the neck tonight, but I had fun racing with him," Busch said. "I thought that was pretty cool. This place is really racy. It's a great place to do that. Myself and Harvick had a lot of fun, as well, too. You know what I thought about in that moment, too? It's funny, was it 2010 where he flat-out wrecked me on the frontstretch, and he was like, that kid was running all over like a clown all day or whatever. So I thought about that. I was like, hmm, looks a little eerie, doesn't it, buddy. Times are different and things are different between he and I, so it was pretty cool. I had a smile on my face once I marched away."

Hamlin was awarded pole after the qualifying session was cancelled due to weather, but it was Truex who impressed early after starting fourth as he gradually passed the competition and eventually got past Harvick on lap 21. Truex continued a strong run throughout the first stage.

Truex was cruising, leading 98 of the first 120 laps of the race before a costly error on pit road when the crew put the left-side tires on the right and right-side tires on the left, forcing Truex back into the pits after one lap around.

Truex dropped to 13th and a lap down after the mistake.

"I felt like if I could have been up front and controlled the race, I could have drove away from them," Truex said. "At the end we were quite a bit quicker, but it was too much of a gap. It's part of the deal. You've got to be perfect and one mistake probably cost us a shot at it."

Conversely, Busch was running steady all night long and took advantage of the gaffe. He had to fend off Harvick, who held the lead for two stints in the second half of the 267-lap race.

Busch surged past Harvick for the lead on lap 223 as Harvick fell back out of contention. Harvick, the lone Ford for Stewart-Haas Racing of the championship 4 with the other three with Joe Gibbs Racing, was hoping for a caution down the stretch.

"On the restarts I could do what I wanted to do and I could hold them off for 15 or 20 laps right there," Harvick said. "This race has come down to that every year so you kind of play towards that and they were quite a bit better than us on the long run, but we had a really good car for those first 15 or 20 laps on the restarts and had a lot of speed. Just never got to try to race for it there with a caution."

Hamlin was searching for his first championship, but only led for two laps--the lowest among the four.

"I feel like I did all I could," Hamlin said. "I don't think I could have done a better job. I didn't leave anything out there. So for the first half of the race we just weren't fast enough, we weren't handling very good, and all of a sudden it went nighttime and we took off, and suddenly I perked up and got a little more and was thinking that we've got a chance. Then just didn't work out."

Daniel Hemric finished 12th to clinch the MENCS Sunoco Rookie of the Year while Paul Menard (17th) and David Ragan (27th) participated in the final races of their careers as regular competitors.

“The first one was special, but this one means more and it's special in different ways on top of it, from the moment me and Richard (Childress) sat down last year talking about doing something this current year and how much excitement and faith he had in my driving ability, and he thought-before I won the championship with JR Motorsports-I could be a champion.”

“It sucks running second again, but we can still stay positive about how great of a year we’ve had,” Custer said.

Reddick, Custer, and Bell are moving up to the MENCS series next year.

“I know the next step is going to be more challenging, but it's been a blast racing the Xfinity Series the last three years, and it's really cool being able to go back-to-back,” Reddick said.

Crafton finished second at the Ford EcoBoost 200 to secure his third Gander Outdoors Truck Series championship despite not winning a race this season.

“I'm going to sleep really good all winter long with this trophy because when you win a race, that's very sweet, but usually you only have one week, like four or five days to gloat about it, but I think I've got like two and a half months to gloat about this championship before next year,” Crafton said.

Crafton, who also won titles in 2013-14, finished ahead of title contenders Ross Chastain (fourth), Brett Moffitt (fifth), and Stewart Friesen (11th) to become the first driver to win a title without a win during the season under the new playoff format established in 2014.

Austin Hill, who was eliminated from the playoffs the previous week, won the 134-lap race for his fourth win of the season.

“It was awesome to win but it stung at the same time,” Hill said. “Just because we were really close to making it to the round of four and having a shot at the championship, and the round-of-six just wasn't very kind to us and we just didn't have enough points there at the end to make it.”