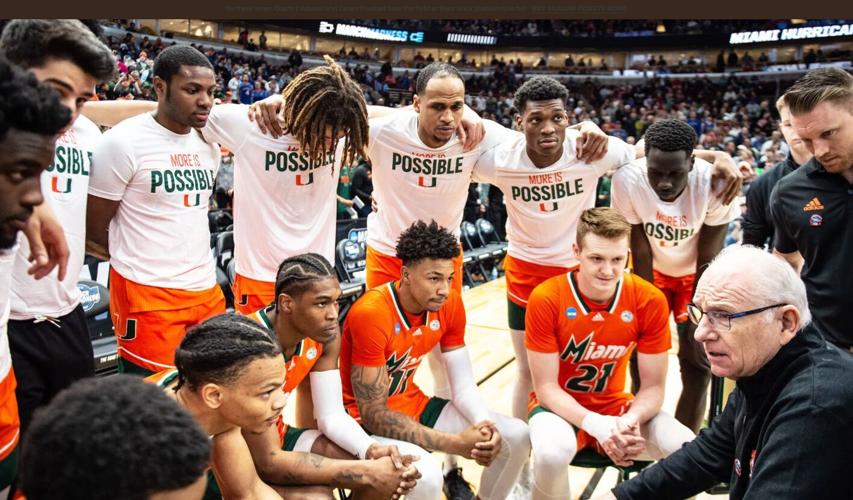 The University of Miami Men’s Basketball Team had one of the most memorable seasons in program history, a season that ultimately ended Sunday afternoon in Chicago with Miami making its first Elite Eight appearance in program history. 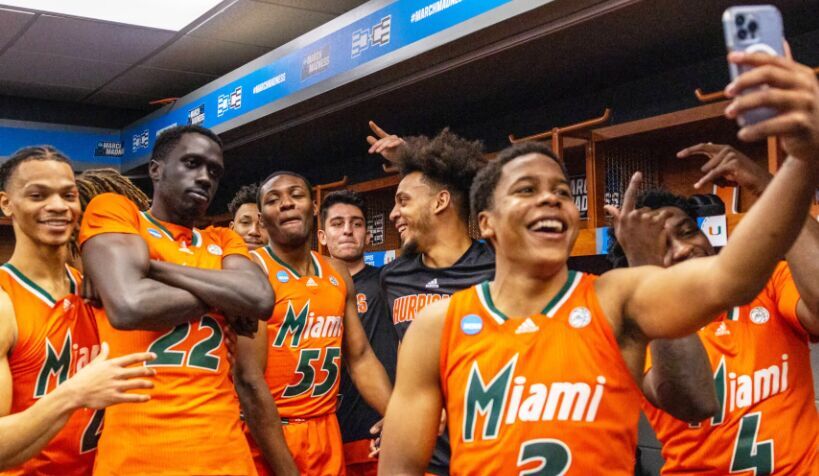 Coach L preached '...enjoy the moment, and have as much fun playing

basketball as you’ve ever had in your lives.'

The University of Miami Men’s Basketball Team had one of the most memorable seasons in program history, a season that ultimately ended Sunday afternoon in Chicago with Miami making its first Elite Eight appearance in program history.

Coach L preached '...enjoy the moment, and have as much fun playing

basketball as you’ve ever had in your lives.'

After last weeks upsets of #7 seed, #21 Southern Cal and #2 seed, #8 Auburn in Greenville, SC the UM hoopsters were off to the ‘House That Michael Jordan Built,’ Chicago’s United Center where they would play Iowa State. Sadly your intrepid reporter was unable to make the trip having been hit with the Covid bug during last weeks trip.

On slate for Miami was a chance to make history. This would be UM’s fourth Sweet Sixteen appearance.

In 2000, they fell to Tulsa after downing Arkansas and Ohio State. In 2013, it was Marquette with the win after the Canes knocked off Pacific and Illinois. The third time was not a charm as Miami fell short again in 2016. After wins over Buffalo and Wichita St., it was Villanova ending the ride.

Coach Jim Larranaga said “We can’t look at this strictly as a game against Iowa State (22-12), and focus all our attention on what they do, we’ve got to be more prepared to do what we need to do. And that is , force turnovers, rebound, share the ball, get assists and not turn it over. We need to play our game and make adjustments during the game.”

Since Selection Sunday, Coach L has preached his message over and over to the players, which was to enjoy the moment, and have as much fun playing basketball as you’ve ever had in your lives. The team has fully bought in to the Miami coaching staff and the result was last Friday night’s biggest win in Miami Basketball history as the Hurricanes, led by Kam McGusty’s 27 points blew out the Cyclones in the Windy City.

The final was 70-56 in a game where Miami only trailed for 16 seconds.

The start was great as UM went up 7-0. After an early timeout, Iowa St. scored the next eight for their only lead of the night.

It was a dogfight of a first half. Points were scarce as both defenses stood out as Miami took a 32-29 lead into the break. Oddly only three Hurricanes scored in the opening frame, McGusty had 14, Jordan Miller 10 and Sam Waardenburg 8.

Coach L described the Canes play after the break like this, “The word that stands out in my mind is ‘relentless.’ We were relentlessly pursuing the ball, relentlessly fighting to keep them from getting easy baskets and then we relentlessly shared the ball. We had 21 assists. That is spectacular against a defense like Iowa States.”

McGusty’s game leading 27 came on 10-18 shooting. Kam was named to the All Regional Team. Miller had 16 on 6-6 from the floor. Waardenburg added 13 and a team leading 9 rebounds. Both Isaiah Wong and Charlie Moore scored seven, while Ward in his hometown added 9 assists. All 70 Miami points came from the starting five in this historic win.

Coach Larranaga became the only coach in NCAA Tournament history to lead two double digit seeds into the Elite Eight having taken #11 seed George Mason there in 2006.

Things did not go Miami’s way on Sunday against the #1 seed Kansas Jayhawks (32-6).

The Canes had an improbable 35-29 six point lead at the half but were no match after the break, scoring only 15 to the Jayhawks 47 as Kansas prevailed 76-50.

The balloon had burst for Miami. Kansas was better. Miami starters played way too many minutes this year and were worn out at the end.

Waardenburg fouled out Sunday and Coach L looked at the stat sheet in the post game press conference and said, “Sam was only -3 for the game. If we could have kept him in the game it could have been one or two possessions at the end.”

Those words reflect the respect Waardenburg has earned from the coaches, his teammates and every Hurricane Basketball follower with a discernible eye.

Congratulations to the entire UM Basketball group for an amazing and always entertaining year. I feel privileged to have gotten to know the players and can say they are all first class young men. This was a team that was given no chance for success this season. The ACC coaches poll had them 12th in the conference. No national preseason poll had them garnered one vote in ‘others getting votes’ categories.

Wait, wasn’t there one Miami paper that gave them a shot. Let me take a minute to check that out. I found it, titled “UM MEN’S BASKETBALL PREVIEW- HEADING BACK TO MARCH MADNESS!”

It seems it’s a Sept. 24, 2021 piece in the illustrious and esteemed ‘Little Paper That Could,” none other than the South Dade News Leader.

This is how it was put in the closing of the preview, “I would advise ignoring the cynics, skeptics and zetetic observations being made in sports and social media about this years UM Basketball team’s chances of a successful season. This team will entertain, surprise and succeed. You heard it here.