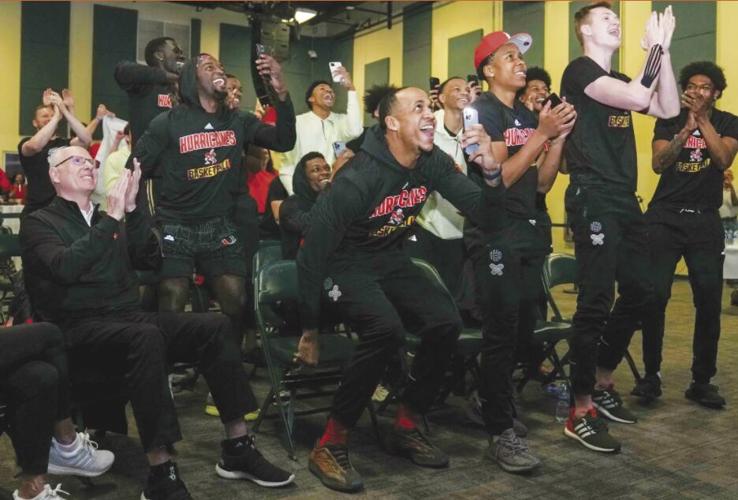 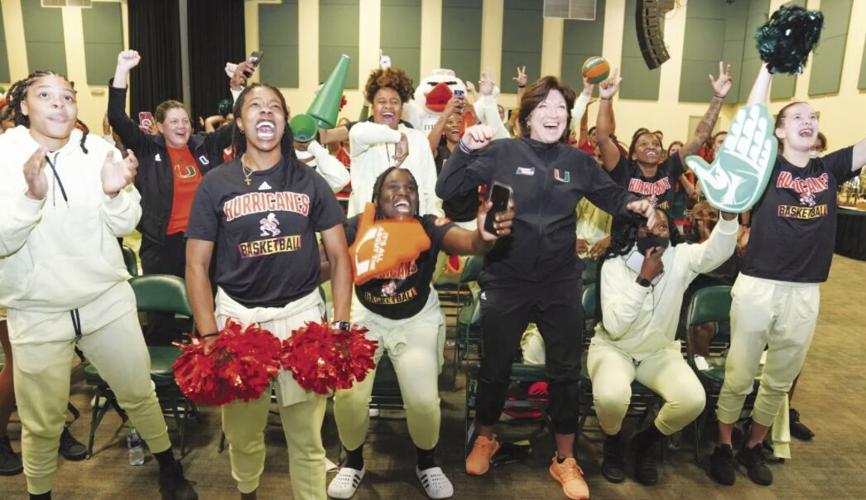 The University of Miami held on on campus selection show party for the Men’s and Women’s Basketball programs on Sunday, March 13.

When a team receives a bid to play in the NCAA Tournament they are said to be going dancing.

Both the Men and Women were optimistic before the selections were made known but also aware that heartbreaks might come.

The Men’s show was up first. Doors were open at 5:00 for the party. Players and coaches were joined by administrative staff, media and season ticket holders. It was a festive atmosphere with a catered meal and Adidas giveaways.

The Men’s squad had their backs to the wall less than two weeks ago but wins at Boston College and Syracuse earned the Canes a #4 Seed and a double-bye in last weeks ACC Tournament up in Brooklyn. Miami was 23-10, 14-6 ACC and 1-1 in the ACC Tournament.

The Canes play in the Tournament likely convinced the selection committee that Miami deserved an invite to the NCAAs. The Hurricanes first opponent up in Brooklyn was the Boston College Eagles. The Canes had defeated the Eagles handily, 81-70 on March 2. This was a different BC team on Thursday, March 10.

Having ran Pittsburgh out of the Barkley’s Center with a 66-46 win on Tuesday followed by a 82-77 OT victory over Wake Forest on Wednesday, the Eagles were a confident squad going into the Miami matchup.

The game started with BC on fire as Quinten Post hit his first four shots including back-to-back threes for 10 points in the first 4:09 leading to a 14-7 early lead.

BC had a 7-0 run early in the second frame and were up six with ten minutes to go.

The Canes were essentially ‘back on the bubble.’ A loss to BC could possibly cost them a chance to dance.

The Eagles Makai Ashton-Langford put up a jumper with 0:09 and missed. Sam Waardenburg rebounded, threw an outlet to Charlie Moore who passed to a streaking Jordan Miller who laid it in as the buzzer sounded for a 72-69 Miami win.

I was sitting on press row and the play was right in front of me. The sight of Miller releasing the layup with the clock at 0:00.2 and at 0:00 as the ball went through the net will be etched in my mind for a long time. That moment likely punched Miami’s ticket to the dance.

Miami played Duke in a semifinal on Friday and lost 80-76 in a hard fought contest that was a one possession game within the last 20 seconds.

The selection show was on a jumbo screen and the seeds were revealed region by region. The West, then the South were announced and no Miami. 32 bids gone 32 to go. The East was next and 16 more were gone. Throats were getting a little dry. The Midwest Region was up and started with the Greenville, SC site.

#7 USC/#10 Miami appeared onscreen and the field house exploded in unbridled joy. The Canes will play Southern Cal on Friday, March 18 at 3:10 pm. The winner will play the Auburn/Jacksonville St winner. The Greenville games will be played at The Bon Secours Wellness Arena. The TRU network will be televising.

The Women’s show started at 8:00 and was far less dramatic. The LadyCanes finished their regular season two weeks ago. Their advancement to the ACC Tournament final last Sunday virtually guaranteed them a dance card. They didn’t have to wait long.

The Greensboro Region was up first (the Women’s Tournament uses Sweet 16 host cities as their region names instead of the geographical designations the Men use).

Next up in the Columbia SC site was #8 Miami vs South Florida. The winners of those two games will play to determine who goes to Greensboro for the Sweet 16. The first and second round games will be at the Colonial Life Arena in Columbia. The LadyCanes game will be televised by ESPN2 at 11:30 AM on Friday, March 18.

Good luck to both the Men and Women in South Carolina. Greenville and Columbia are 108 miles apart and I’ll do my best to be at both sites on Friday. The NCAA has approved the News Leader request for Media Credentials and I’ll be there. I’m staying in Greenville, so I’ll drive to Columbia early Friday for the LadyCanes 11:30 start, then head back for the Men’s 3:10 start. I’ll be doing my best to keep gas prices out of my mind.

The Baseball season is in full swing. UM is 11-4, 2-1 ACC. A road game at UCF on March 16 and a weekend series at Clemson are up next. Detailed coverage will begin after Basketball seasons.

Updates on Spring Practice and other Football news will be coming soon.