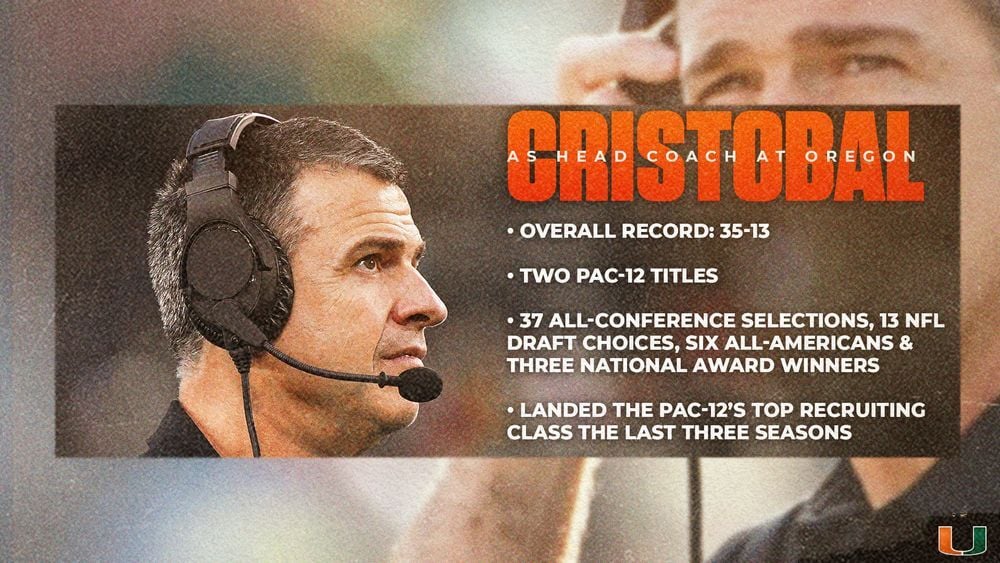 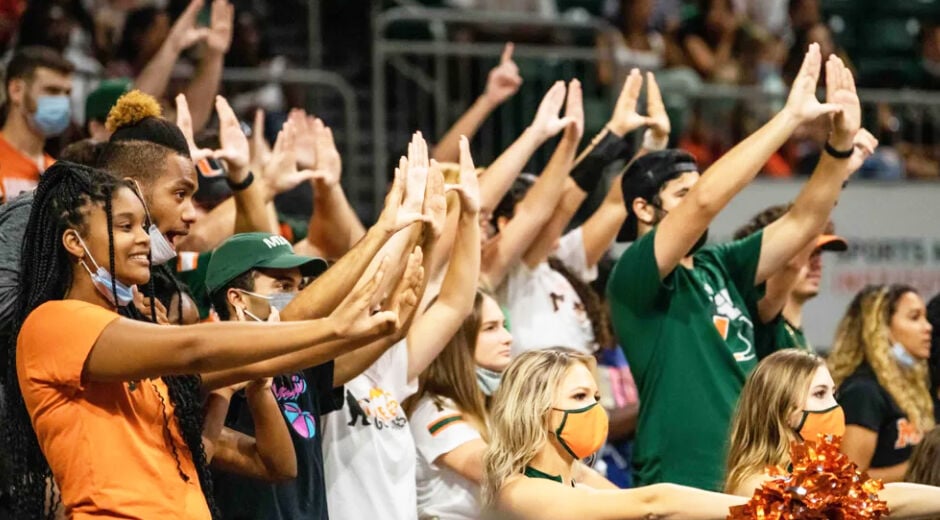 Come out and enjoy the excitement, like these fans.

Diaz ﬁnished his three year tenure with a 21-15 overall record. He was 7-5 this year and 0-2 in bowl appearances.

Cristobal is a Miami native attending Columbus HS and UM where he was an oﬀensive lineman on two National Championship teams, one under Coach Jimmy Johnson and another with Dennis Erickson.

Cristobal is known as an elite recruiter and has had great success at Oregon in his four years there with a 35-13 record including two PAC-12 Championships.

Cristobal is a Double Alum at UM and his BA and Masters degrees in Business Administration have apparently served him well as he inked a ten year, $80 million dollar contract upon his return.

Miami Athletic Director Blake James and UM parted ways on November 15. As of this writing, a replacement has not yet been selected but we can expect an announcement very soon.

The Canes have accepted a bid to face Washington State (7-5, 6-3 PAC-12) in the Tony the Tiger Sun Bowl at noon on New Years Eve.

Wednesday, Dec. 8th (tomorrow as I’m submitting this write up) is NCAA Football National letter of intent signing day and I’m quite sure Cristobal has not had more than a couple of hours sleep this week as he tries to bolster Miami’s 2022 class.

Good news abounds in Hurricanes world as both the Men and Women Basketball had great weeks following mixed results in their Thanksgiving Week tournaments. Both squads looked reborn and ready for conference play.

On Dec. 1st the UM Men were up at the Bryce Jordan Center in Happy Valley to take on Penn State in the Big 10-ACC Challenge.

Starting guards Kam McGusty and Charlie Moore both were in foul trouble early and sat most of the ﬁrst half.

Freshmen Bensley Joseph and Wooga Poplar came up big as their replacements, especially on the defensive end. The home side closed it to one early in the second half before Miami hit two 3s in a 71 second 9-2 run going up 38-30 with 17:19.

McGusty who scored all his 12 points in the 2nd half hit a three with 0:38 left sealing the win.

Waardenburg led the scoring with 14 including four from beyond the arc. Zay Wong and Moore each added 12.

There was only one lead change as the Tigers dominated and never trailed in the ﬁrst 37:05 but Jordan Miller’s three pointer on an assist from Waardenburg with 2:55 gave the Canes a 71-70 lead they never relinquished. The Canes were down 40-34 at halftime and nine (70-61) with 4:49 left when Waardenburg hit a three starting a 12-0 run that put Miami up 73-70 with 2:29. Clemson got within one on a layup with just under 2:00 left before Miller answered with a layup of his own at 1:31.

The Tigers were forced to send the Canes to the charity stripe at the end and Miami made 5-6 going up 80-73 with 0:05 before a meaningless 2 pointer at the buzzer made it an 80-75 Miami win. Waardenburg led the scoring with 18 hitting 4 three pointers for the second game in a row. McGusty had 15 and Wong and Miller 13.

Jordan Miller’s defense in the second half denying the ball to Clemson’s outstanding PJ Hall was the diﬀerence in this one. Miami could do nothing to stop Hall until Miller took over.

For the second straight game Miami only turned the ball over 8 times while Penn State gave it up 14 times and Clemson 18.

The future is looking a little brighter for the Men in most areas of play. They must rebound more consistently for continued ACC success. Next up Lipscomb 7:00 at the Watsco on Dec 8. Then up to the Barkley’s in Brooklyn on Sunday 12/12 playing Fordham in the Hall of Fame Invitational ‘Hoop Hall’ Classic.

After visiting #2 Maryland last week and taking the Terps to the ﬁnal minute before falling, the Lady Canes are conﬁdent they can compete with anyone.

Miami hosted Tulane and Arkansas Pine Bluﬀ this past Sunday and Monday in the Miami Holiday Classic. Both the Green Wave and Golden Lions are expected conference winners and likely NCAA Tournament participants this season.

Tulane went up 15-8 on Sunday before the Lady Canes closed the 1st quarter with a 9-1 run for a 17-16 lead. The Green Wave responded with a 14-11 2nd quarter taking a 30-28 halftime edge. Miami came out cold in the 3rd missing their ﬁrst ﬁve shots, then hit the next four taking a 41-35 lead. But Tulane started hitting their shots and managed a 48-47 lead after three.

The Wave hit a 3-pointer early in the 4th before UM’s defense tightened with six straight stops. On oﬀense the Canes were on an 11-2 run going on to win the 4th quarter 23-15 and the game 70-63.

There is a new energy in these Lady Canes.

On Monday, Ark-PB was up and the Lady Canes came out with their best 30 minutes of the year, taking a 19 point advantage into the ﬁnal frame. The Golden Lions are tough and fought to the end with an 18-12 4th quarter in their favor but Miami was too strong winning 78-65 and earning the Holiday Classic Championship.

Marshall again led the scoring with 19 including 4 more threes.

This is a true team with 8 players having two or more baskets in the ﬁnal.

Next up Robert Morris at home Sunday at 2:00.

Both the Women and Men’s programs need and very much deserve more fan support. Come out and take a look at these teams for yourself. You will come back!