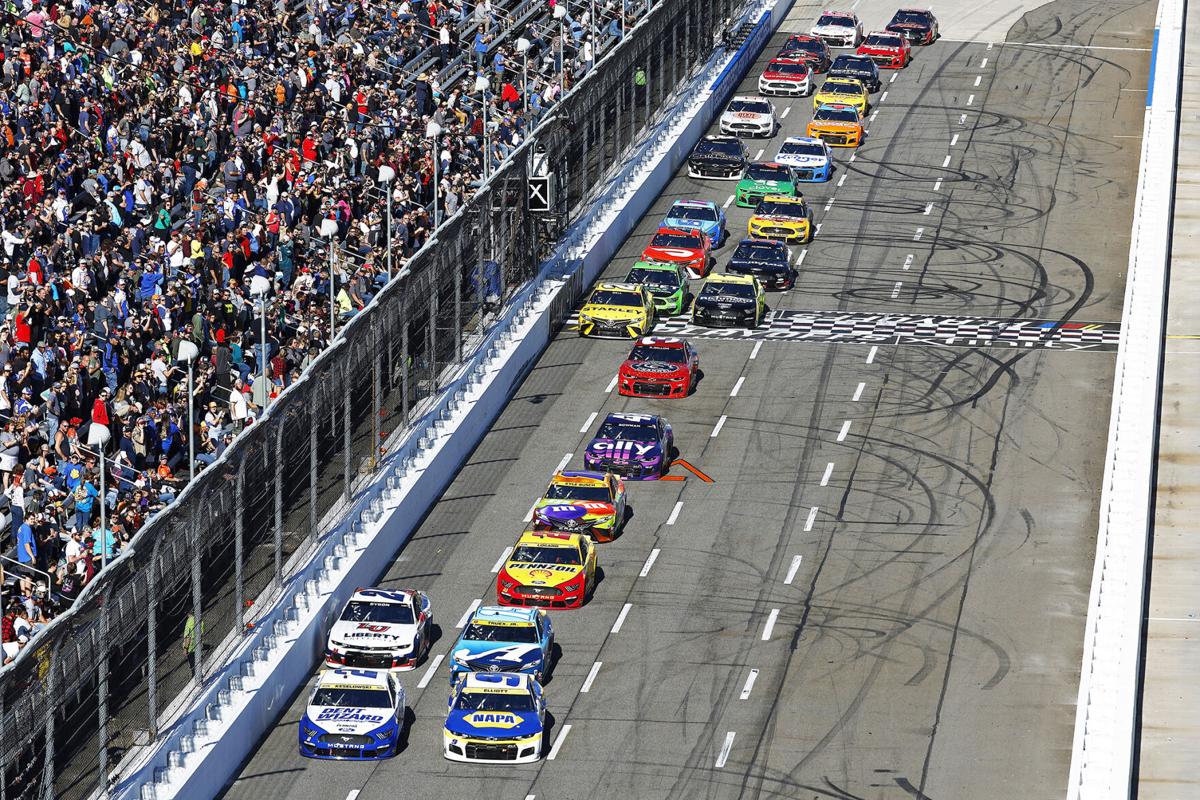 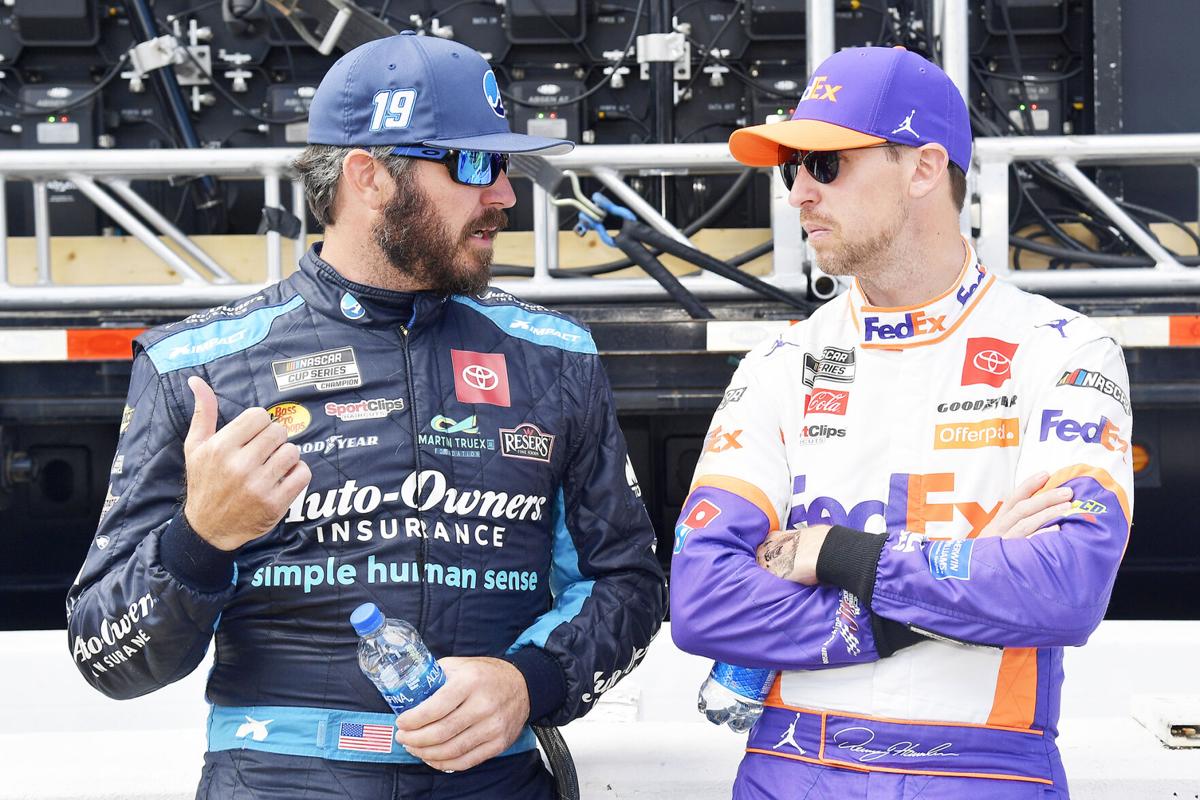 All the sweat, the tears, the heart-warming pains and the back breaking gains have all culminated to this one last shot for the Championship 4 contenders to vie for the 2021 NASCAR Cup Series Championship this Sunday.

Hendrick Motorsports drivers Kyle Larson and Chase Elliott and Joe Gibbs Racing drivers Martin Truex Jr. and Denny Hamlin have worked harder, done more with what they had and minimized mistakes better in the first 35 races, all while navigating the rigors of the postseason to make the Playoffs’ final round.

Now the stage is set for the Championship 4 drivers to contend for the title and the prestigious Bill France Cup trophy which will be awarded to the highest finishing driver of the four at Phoenix Raceway.

Two of the four drivers are former champions – Truex (2017) and Elliott (2020) – with Hamlin and Larson looking for their first Cup titles this season.

Here’s an in-depth look at the championship contenders in 2021:

Elliott’s talent was apparent early on in his career. The Dawsonville, Georgia native jumped in the national NASCAR scene in 2013 in the NASCAR Camping World Truck Series on a part-time basis, making nine starts and winning at Canadian Tire Motorsports Park in just his sixth start. He then climbed up to the NASCAR Xfinity Series with JR Motorsport and became the first rookie in series history to win the series championship in 2014. He ran one more season in Xfinity, finishing runner-up in the points in 2015 before moving up to the NASCAR Cup Series fulltime in 2016 with Hendrick Motorsports.

Elliott has qualified for the Playoffs all six seasons he has competed in the NASCAR Cup Series, and this is the second time he has earned a spot in the Championship 4 Round (2020, 2021). Since running fulltime in the series, Elliott has made 220 starts putting up 13 wins, 73 top fives and 116 top 10s.

Mr. ‘Most Popular’ is looking to add to his championship resume. Embraced by the overwhelming cheers in his favor by the fans at the race track, there is no doubt Hendrick Motorsports’ Chase Elliott is the NASCAR Cup Series Most Popular driver. The year-end award he has taken home for that special distinction the last three seasons is just confirmation on top of the songs of fans singing his praises on a weekly basis.

The reigning 2020 NASCAR Cup Series champion, Elliott, has answered his title winning season with quite the comparative performance heading into Phoenix Raceway this weekend. Elliott was strong out of the gate this season nearly winning the Daytona 500 (finished runner-up) and held the momentum throughout the regular season never falling out of the top 10 in points. He grabbed two wins during the regular season, at Circuit of The Americas and Road America.

Elliott entered the 2021 Playoffs as the 10th seed with 21 Playoff points to his credit.

Unfortunately, a late race incident with Christopher Bell at Darlington to open the 2021 Playoffs relegated him to a 31st-place finish to open the postseason, but Elliott was quick to rebound, finishing fourth-place at Richmond and had earned enough points following a 25th-place finish at Bristol to advance to the Round of 12.

Chase Elliott, has performed much better at Phoenix than the previous season finale venue Homestead-Miami Speedway; including winning the championship race last season and taking the title. Elliott has made 11 series starts at Phoenix Raceway in the NASCAR Cup Series, posting one win (2020), four top fives, seven top 10s and a pole. His average finish at Phoenix is a strong 11.2, fourth-best in the series and third-best among the 2021 Championship 4.

Hamlin’s best finish in the NASCAR Cup Series championship standings came in 2010 when he finished runner-up in the points behind Jimmie Johnson.

Hamlin’s 2021 championship campaign started with a fifth-place finish in the Daytona 500, and then a third-place finish at the Daytona Road Course in the opening two weeks of the schedule and as a result, he took the points lead and then held it for 22 straight races. It has been Hamlin’s relentless consistency that has made the different this season. In 35 starts, he has posted two wins, 18 top fives and 24 top 10s. His average finish this season is a stout 8.6.

Hamlin shot out of the gate this Playoffs winning the open race at Darlington Raceway, then finished runner-up at Richmond and ninth at Bristol to advance to the Round of 12. He then did it again, winning the opening race to the Round of 8 at Las Vegas and the followed it up with a seventh at Talladega and a fifth-place finish at the Charlotte Roval. Then Hamlin rallied off an 11th at Texas and another fifth-place finish at Kansas, but nearly had his postseason squandered at Martinsville after being wrecked from the lead by Alex Bowman. Bowman would go on to win and Hamlin would finish 24th nearly missing the Championship 4, but thanks to his Playoff points he earned enough to move on.

The one-mile Phoenix Raceway is one of the Joe Gibbs Racing driver’s best tracks in the NASCAR Cup Series, having made 32 series starts at the 1-mile track collecting two wins (2012, 2019), 15 top fives, 19 top 10s and two poles. His average finish at Phoenix is 10.781, second-best in the series and best among the Championship 4.

Of the 2021 NASCAR Cup Series Championship 4 drivers, Larson is the only one making his final round debut. The Elk Grove, California native’s previous best finish in the NASCAR Cup Series final standings was sixth back in 2019.

Larson, one of the most accomplished Dirt racers on the planet, graduated from the NASCAR Drive for Diversity program and immediately pounced on the NASCAR national series scene.

Ever since 2014, Larson has been scheduled to run fulltime in the NASCAR Cup Series.

He spent almost seven full seasons with Chip Ganassi Racing putting up six wins with organization from 2014-2020. But in 2020, Chip Ganassi Racing released Larson just four races into the season following his suspension by racial slur over the radio during a public iRacing event.

Larson would sit out the remainder of the 2020 season. Following Larson fulfilling the requirements by NASCAR to lift his suspension, Hendrick Motorsports reached out to him to see if he wanted another shot. And as they say, the rest is history.

Larson got up to speed at Hendrick Motorsports fairly quickly this season winning in just his fourth race (Las Vegas-1) with the organization – a team record for fewest races before a Cup win. And once Larson found his groove, the wins just kept coming. He has rallied off nine total victories this season (Las Vegas, Charlotte, Sonoma, Nashville, Watkins Glen, Bristol, Charlotte Road Course, Texas and Kansas) and became the first driver in series history to win at three different road courses in a single year.

And to top it all off, Larson won the 2021 NASCAR Cup Series Regular Season Championship and entered the 2021 Playoffs as the No. 1 seed with 53 Playoff points to his credit.

He is the only driver of this season’s NASCAR Cup Series Championship 4 that has not previously won at Phoenix.), 11th-most.

Martin Truex Jr. returns to the NASCAR Cup Series Playoffs Championship 4 Round for a series record-tying fifth time since the inception of the elimination-style format in 2014; joining Kevin Harvick and Kyle Busch with five Champ 4 appearances each. And in the process, he became just the fourth different driver to enter the penultimate race under the Playoff cutline and race his way into the postseason’s final round; joining Kevin Harvick in 2014, Denny Hamlin in 2019 and Chase Elliott in 2020.

The 2021 season marks his 16th full season in the NASCAR Cup Series and over that time the Mayetta, New Jersey native has collected 31 wins, 128 top fives and 247 top 10s.

He joined Joe Gibbs Racing in 2019 after two very successful seasons with Furniture Row Racing that saw him earn a Cup championship (2017) and two Championship 4 Round appearances (2017, 2018).

Truex jumped into the 2021 Playoffs with both feet posting fourth at Darlington, a win at Richmond to advance to the next round and a seventh-place finish at Bristol. He then put up a fourth at Las Vegas, a 12th at Talladega and a 29th at the Charlotte Roval to skate into the Round of 8. From there Truex finished 25th at Texas and seventh at Kansas. As a result, he went to Martinsville either having to win or race his way in on points as he was below the cutline. The 2017 series champ answered the bell and finishing fourth and making the final round by three points over his teammate Kyle Busch.

Now the 41-year-old is looking to become the 17th different driver in series history to win multiple championships and just the second active driver to accomplish the feat joining his JGR teammate Kyle Busch (2015, 2019).

Though there have been some “rough patches” in Martin Truex Jr.’s overall Phoenix Raceway resume, his resume of late has been outstanding. Truex won at the 1-mile Phoenix track earlier this season and returns to not only get the season sweep but take home his second Cup title.

Earlier this season at Phoenix, Truex led 64 laps after starting fifth en route to his first win at the track.