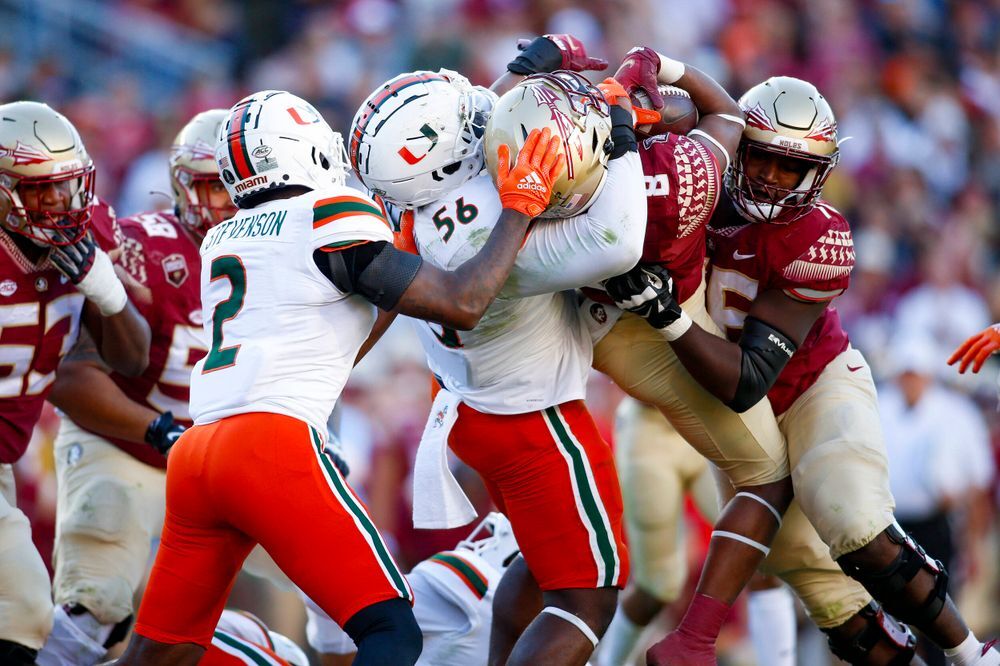 It was a hard fought game as the Miami Hurricanes met up against the Florida State Seminoles at Doak Campbell Stadium in Tallahassee on Saturday, Nov. 13th. 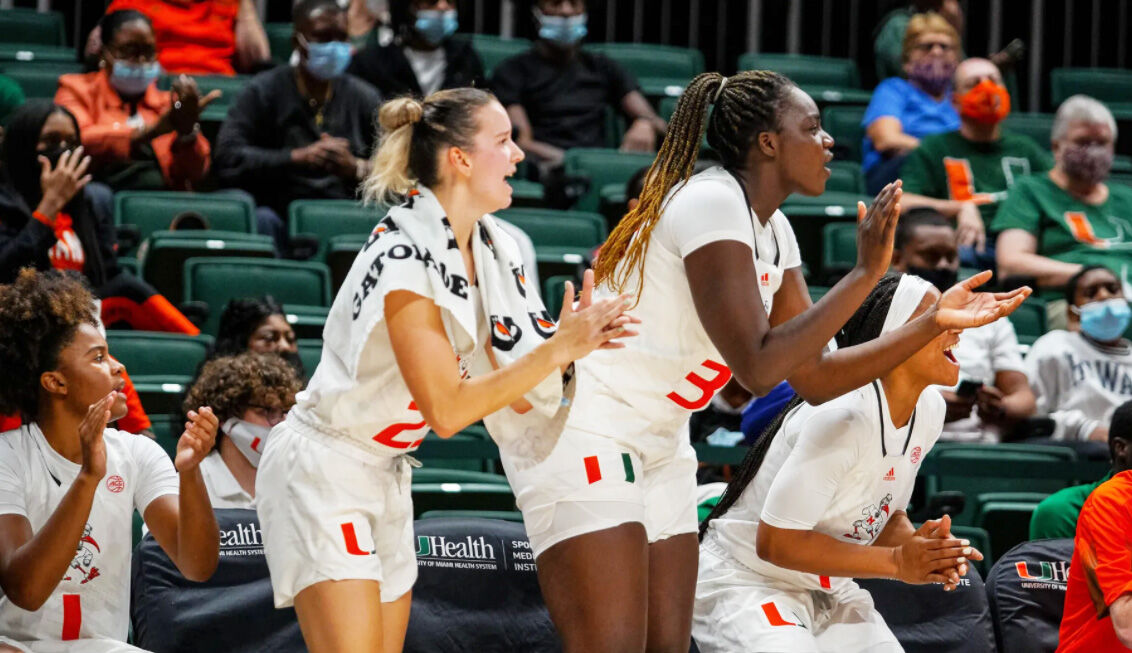 It was a hard fought game as the Miami Hurricanes met up against the Florida State Seminoles at Doak Campbell Stadium in Tallahassee on Saturday, Nov. 13th.

Hurricane football was on a roll heading into last Saturday’s game at Doak Campbell Stadium against bitter rivals, the Florida State Seminoles.

Miami had bested FSU four years in a row and defeated three ACC teams on the trot before a late collapse against the Noles brought it all to a halt. As was the case in all five prior ACC contests played this year the final verdict was not revealed until the last possession of the game.

One would think the Canes would have come out pumped and flying against FSU but inexplicably that was not the case. Miami committed eight first quarter penalties, and freshman sensation QB Tyler Van Dyke was intercepted twice by Jammie Robinson and lost a fumble in the opening frame digging the Canes into a 17-0 hole.

Miami managed a late Van Dyke to Key’Shawn Smith 5 yd 2nd quarter score and cut the deficit to 20-7 at halftime.

The Canes came back in the third quarter when on FSU’s second drive Miami DT Nesta Jade Silvera recovered a Noles RB Jashaun Corbin fumble. Van Dyke dropped back on 2nd and goal and threw a pass to Smith that was deflected and ended up in Mike Harley’s hands in the back of the end zone.

Miami defense then held and FSU executed a great punt to the UM three. Van Dyke took the Canes 97 yds on 11 plays and finished with a 4th down 4 yd pass to Will Mallory for the go ahead score and it was UM 21-FSU 20.

FSU then went three and out and Miami had the ball on their 27.

Again Van Dyke took over moving Miami to the Noles 35 and with 2nd and 19 hit Jaylan Knighton over the middle where FSU defensive star Jarvis Brownlee absolutely crushed Knighton who did not go down but somehow spun around and made his way to the end zone, 28-20 Miami with 11:04 left.

Florida State took the kickoff and went 64 yds on 14 plays closing the score to 28-23 when Ryan Fitzgerald’s hit his third FG of the day with 4:43 to go.

Miami made one first down on the ensuing drive and with 4th and 1 on their 47 and with 2:29 left decided to kick it away.

FSU was on their 20 and on first down Jordan Travis completed a 59 yd pass to Ja’Khi Douglas and it was 1st and 10 Noles on the Miami 21 with 2:09 remaining.

After an incompletion, a 1 yd rush, a five yd penalty and another missed pass it was 4th and 14 on the Miami 25 with all the chips on the table. Miami chose to only rush three and had eight defenders back giving Travis all the time in the world to find Andrew Parchment open for a 24 yard gain at the Miami one. First and goal FSU with 0:46. Travis took it in on second down then ran from the two for the two point conversion for a 31-28 lead.

Florida State was the first ACC team to score a touchdown against Miami on either of their last two possessions. The Canes had held the 5 previous opponents to 2 FGs total on 10 tries.

The women are now 3-0 after adding wins against Bethune-Cookman Friday and Stetson on Sunday. In the 55-43 win over B-C Mykea Gray had 12 points and Kelsey Marshall 11. The team had 51 rebounds for the second consecutive game.

UM then took control in the 2nd half with a well balanced attack. Six Canes had 7 or more points. Maeva Djaldi-Tabdi led with 10. Karla Erjavec and Gray had nine , Naomi Mbandu and Marshall each added seven. Kelsey also added team leading 8 rebounds and 6 assists.

The women are off to the Bahamas next week for a Thanksgiving tournament.

The men lost a high scoring affair against UCF Saturday afternoon. The final was 95-89 and the Canes closed it to three with 0:11 left but were never really in the game.

The best Knight of the day was likely Louisville transfer Darius Perry whose 9 points, 5 rebounds, 6 assists and leadership assured the very talented Knights came out on top. Miami had excellent contributions as Kam McGusty had 28, Zay Wong 20, Sam Waardenburg 16 and Anthony Walker 12. UCF is a very good team similar to mid level ACC squads and if Miami is to be competitive in conference play they will have to rebound much better going forward.

On Tuesday night the men headed up to Boca Raton to face the Florida Atlantic Owls. Up 16 early and again with 8:20 to go this was the one that almost got away. The Owls cut that lead to 60-57 on a Michael Forrest layup and free throw with 3:19 left.

With 0:18 left, Bryan Greenlee made a layup closing score to 66-63 and was fouled by Wong. Greenlee missed the FT but got his own rebound and passed to Forrest who buried a three tying it at 66 with 0:16. Wong brought the ball down court and drove to the hoop and dropped the game winner with 0:0.7 left.

The Owls were buoyed by a sellout crowd in their comeback attempt. Miami could certainly use that sort of support at the Watsco Center.

With the 68-66 win over FAU the Canes are 2-1 and likely will be 3-1 heading to the Land of Disney. Miami must improve and play better at both ends of the floor if they hope to return from the tourney with a winning record.