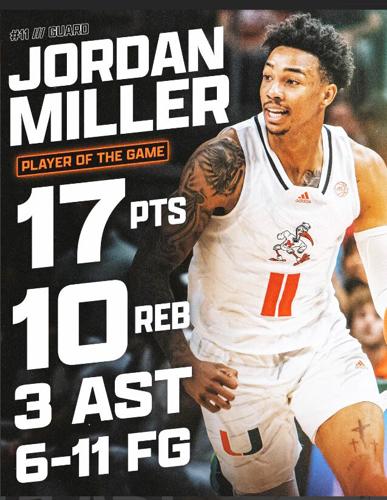 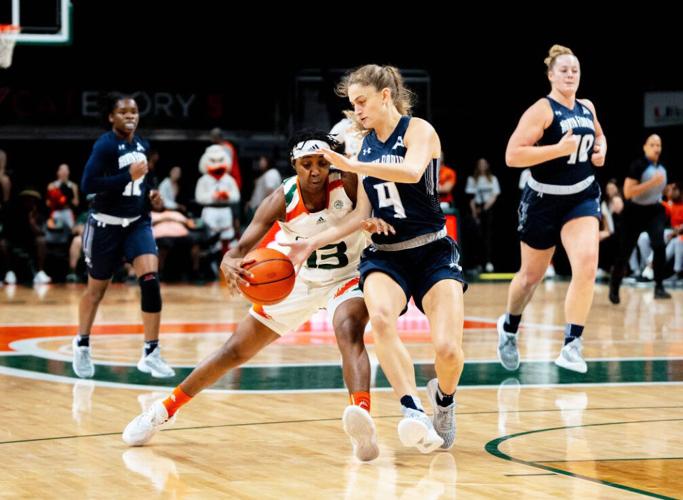 The Men opened last weeks play on Wednesday with an ACC-Big10 Challenge game against the Rutgers Scarlet Knights, an excellent squad that has defeated #14 Indians by 15 points this year.

The Hurricanes were up to the task.

Rutgers has an explosive squad that can score inside and out. Sure future NBA big man Clifford Omoruyi towered over all Miami defenders and tallied 16 points with 9 rebounds. Sharpshooter Caleb McConnell had 16 and 6.

Forward Aundre Hyatt made three consecutive three pointers in a first half team spree that included five consecutive shots made from deep.

The Jersey visitors took a 34-33 lead at the half and were up as many as 11 in the second stanza but their fortunes faded away at the hands of a late second half iron tight Canes defensive effort.

Miami shaved the deficit to 47-54 with 11:07 left and took over from there limiting the Scarlet Knights to seven points on three baskets the rest of the way and netting nineteen themselves for a 68-61 win.

Miami is the only team with 8 wins in the last 9 years of the Challenge. The Canes win also gave the ACC an 8-6 edge in this, the last year of the competition.

Starting next season the ACC teams will face off against the SEC and the Big-10 will play the Big-12.

Isaiah Wong had a 7-0 run of his own in the comeback and finished with 16 points, 4 assists and 2 steals. Norchad Omier had 17 and 9 boards and Jordan Miller had a double-double with 17 and 10.

Bensley Joseph’s dogged defense that included 3 steals was another major factor in the win.

undefeated Michigan Wolverines the following night and it did not go well. Michigan is excellent and they played very well earning a 76-64 victory.

Miami is good and is getting better and if these teams face off around tournament time it will be a toss-up.

This game is best summarized with three facts. Michigan shot 51.1% from the floor, made 24-26 free throws and Miami committed 28 turnovers.

The LadyCanes need to be better on both ends of the floor to beat teams as good as Michigan. It’s also the last year of the ACC=Big-10 Women’s Challenge and like the Men , the ACC Women prevailed 8-6.

The Men took their first ACC road trip on Sunday, Dec. 4th, and absolutely routed the Louisville Cardinals at the KFC Yum! Center.

Miami (8-1,1-0) led by 32 midway in the second half while dominating in every statistical category.

In the 80-53 win, ten Canes scored 5 or more and ten had 3 or more rebounds. No Hurricane played as much as 25 minutes and all healthy Canes saw court time.

There’s not much to say but ‘well done Canes, a conference road win is always a very good win’.

Miami has a very big conference game at 2 PM on Saturday, Dec.10th. The NC State Wolfpack will be at the Watsco Center.

A great crowd would be much appreciated. Fan support means more to the players, coaches and staff than you might imagine. Come alone, bring someone or your family and be part of something special.

The LadyCanes (7-3) also played Sunday. They were at home against the North Florida Ospreys and well might have done the Men one better with an 85-45 drubbing of the visitors.

The LadyCanes led by 43 in the game. They forced 30 turnovers and had 18 steals. Eight of those steals were by Lashae Dwyer and the sophmore guard was also high scorer with 20. The bench had 51 points and 15 assists. All ten

available players were on the court for 10 or more minutes. Nine scored and nine had rebounds. Both of the Cavinder twins scored in double figures, Hanna had 11 and Haley 10.

The Women host the Florida Gators on Sunday, Dec. 11th at 4:00 pm. Your support would be much appreciated.