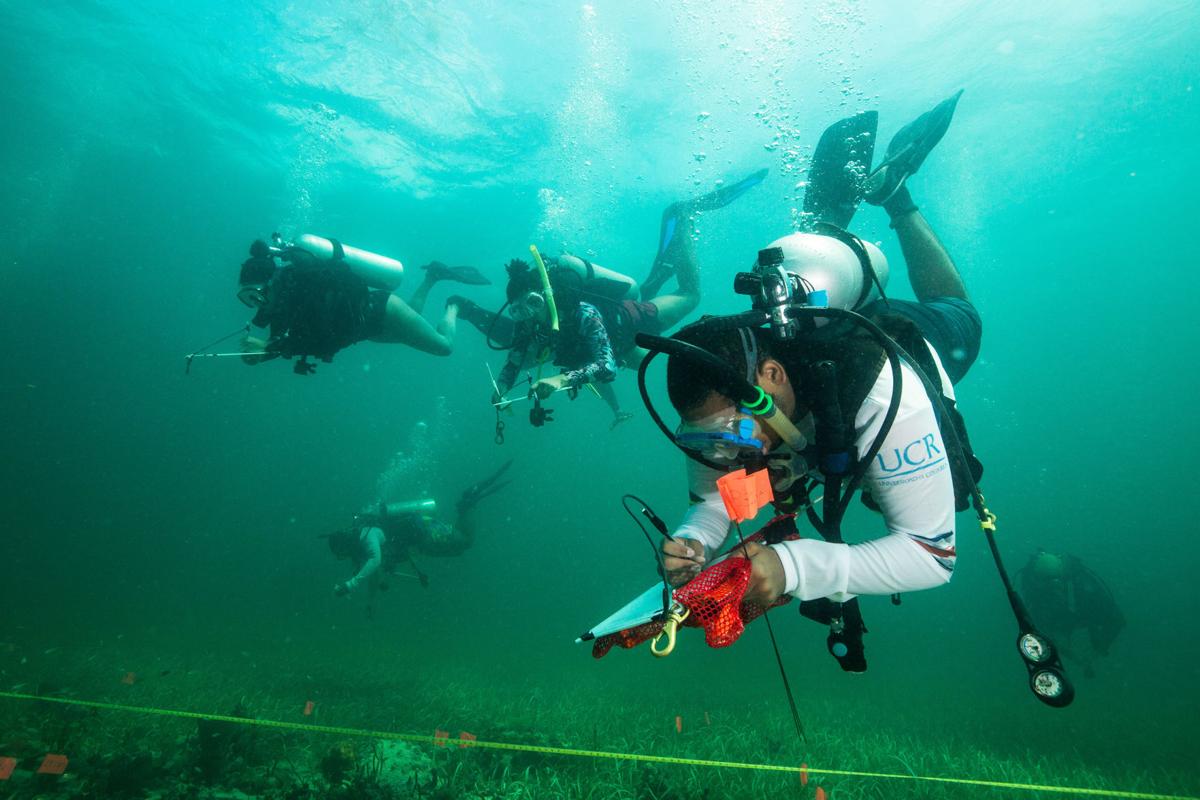 YDWP students must properly “hover” underwater to avoid damaging the fragile site they are helping to document. 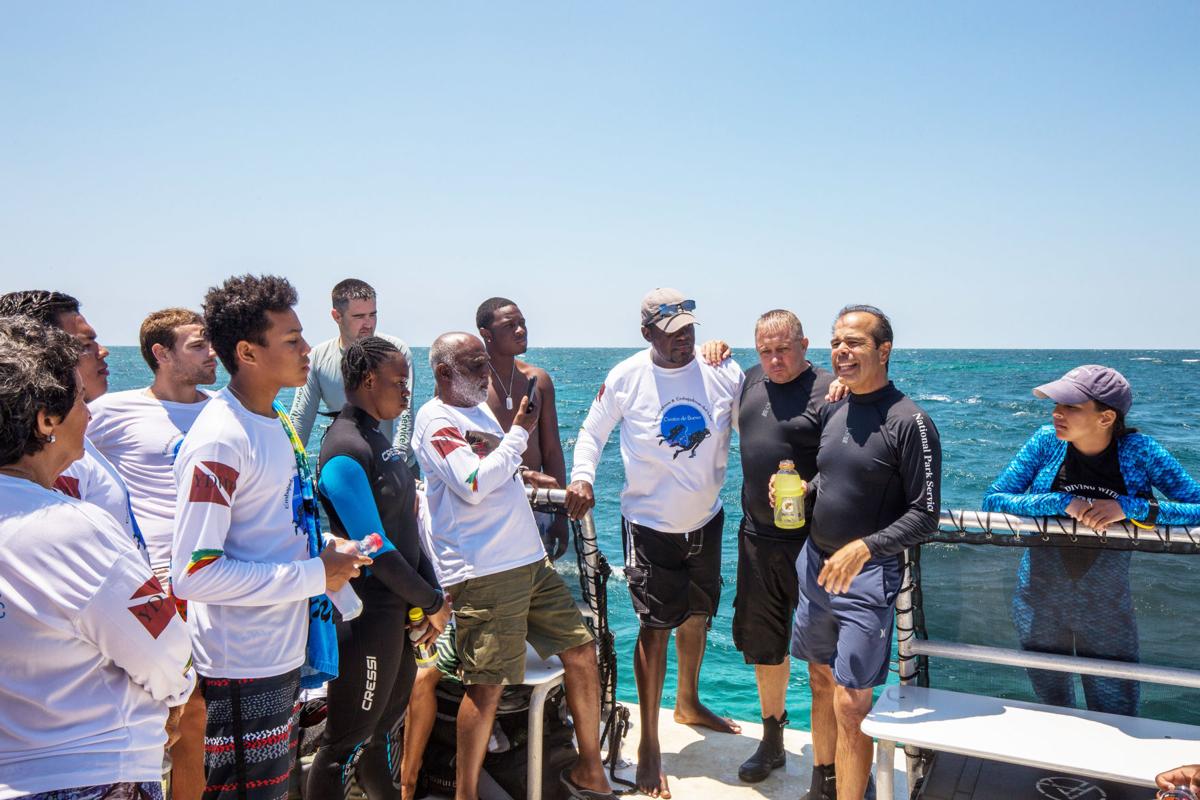 YDWP students must properly “hover” underwater to avoid damaging the fragile site they are helping to document.

Ken Stewart, who lives in Nashville, was serving as the Southern Regional Representative of the National Association of Black Scuba Divers when Karuna Eberl telephoned him. She asked if he knew divers she could perhaps interview as part of her work on her documentary, the “Guerrero Project”.

The Guerrero, a slave ship carrying more than 500 slaves, wrecked in 1827 in the upper Florida Keys during a battle with the British. The search for the ship has intrigued historians and maritime archeologists, to include the late Brenda Lanzendorf, who was the resident archeologist and cultural resources manager for Biscayne National Park.

After release of Eberl’s film in 2004, Stewart traveled to Biscayne Park to meet Lanzendorf. With as many as 100-plus shipwrecks in the waters of the park, she could make little progress alone in seeking them out, mapping, and hopefully making positive identification. “I went back and made some calls,” Stewart said.

“I asked divers I knew if they were ready for something different; did they want to dive with a purpose.” That was the key phrase and Stewart and three others made their way to the park where they completed a maritime archaeology course. He subsequently established the non-profit, Diving With a Purpose (DWP). Their initial Maritime Archeology Training program which supports the National Parks Service (NPS) expanded to include a Coral Reef Training Program

working with the National Oceanic and Atmospheric Administration (NOAA) and the Coral Restoration Foundation (CRF) in Key Largo.

Moving forward to 2011, Stewart was on a boat in South Africa for another Slave Wrecks Project when he met Justine Benanty. In discussing DWP and how to engage youth beyond the few he’d brought in, Benanty spoke of her similar work. Those early conversations ultimately resulted in formally creating Youth Diving With a Purpose (YDWP). A grant from the NPS was a major building block, but bringing the first students for a week of training at Biscayne required additional funding. Stewart was looking at how much he could charge to his credit cards when a generous donor sent a check for $10,000 to cover what was needed.

YDWP goes well beyond a summer session though. Students in target ages of fifteen to eighteen, enter the program with the understanding there are three years of learning and commitment. The summer field work is important to enhance their knowledge of maritime archeology, coral reservation/

As Chris Searles of DWP says, “Not all the students stay with us, but you see how some of them start out barely able to speak in front of people. By the time they finish three years later, they have a life skill they can use whether or not they remain in the marine sciences.”

Stewart expanded on that requirement. “They must give at least two presentations a year. I make it easy the first year; they can pick a small group of family and friends. By the second year, they should be able to speak to a

public group. They have to document their presentations to be eligible to continue in the program. To date, the students have collectively made 280 presentations.”

Benanty, co-founder of YDWP, and passionate about maritime archeology and ocean advocacy, keeps track of the students. “Of the 70 or 80 graduates, all but a few have continued in marine biology or a related field. These are the kind of kids who give me hope for the planet. They are dedicated to ocean preservation and advocacy.”

This commitment to a global view has allowed the organization to reach into diverse communities as far away as Mozambique. This year’s group included students from Peru, Costa Rico, and multiple states. Most were able to attend the week of work with corals as well as the week of maritime archaeology training that closed out Saturday, July 27, 2019. As their final task,

students completed their portion of underwater mapping they’d been responsible for during their dives. The wreck they surveyed is a 19th century ship and their results add to the existing site map.

Joshua Marano, Archeological Technician for Biscayne National Park, has seen all but the first group of students come for summer training. “I wanted to thank you,” he said as they prepared for their graduation acknowledgement. You’ve put a lot of work into this and been very engaged.” He, too, has seen improvement in the return students’ skills. Precision required for underwater mapping limits the type of volunteers Marano can use and he welcomes the DWP and YDWP dedication to the on-going projects.

public, visitors can enjoy the Maritime Heritage Trail Shipwreck Snorkel Experience as one of many activities in the park. To see the current list, description, and costs of Eco Adventures, go to https://www.biscaynenationalparkinstitute.org

For more details about the park itself, go to https://www.national-park.com/welcome-to-biscayne-national-park

To learn more about DWP and YDWP, go to https://divingwithapur