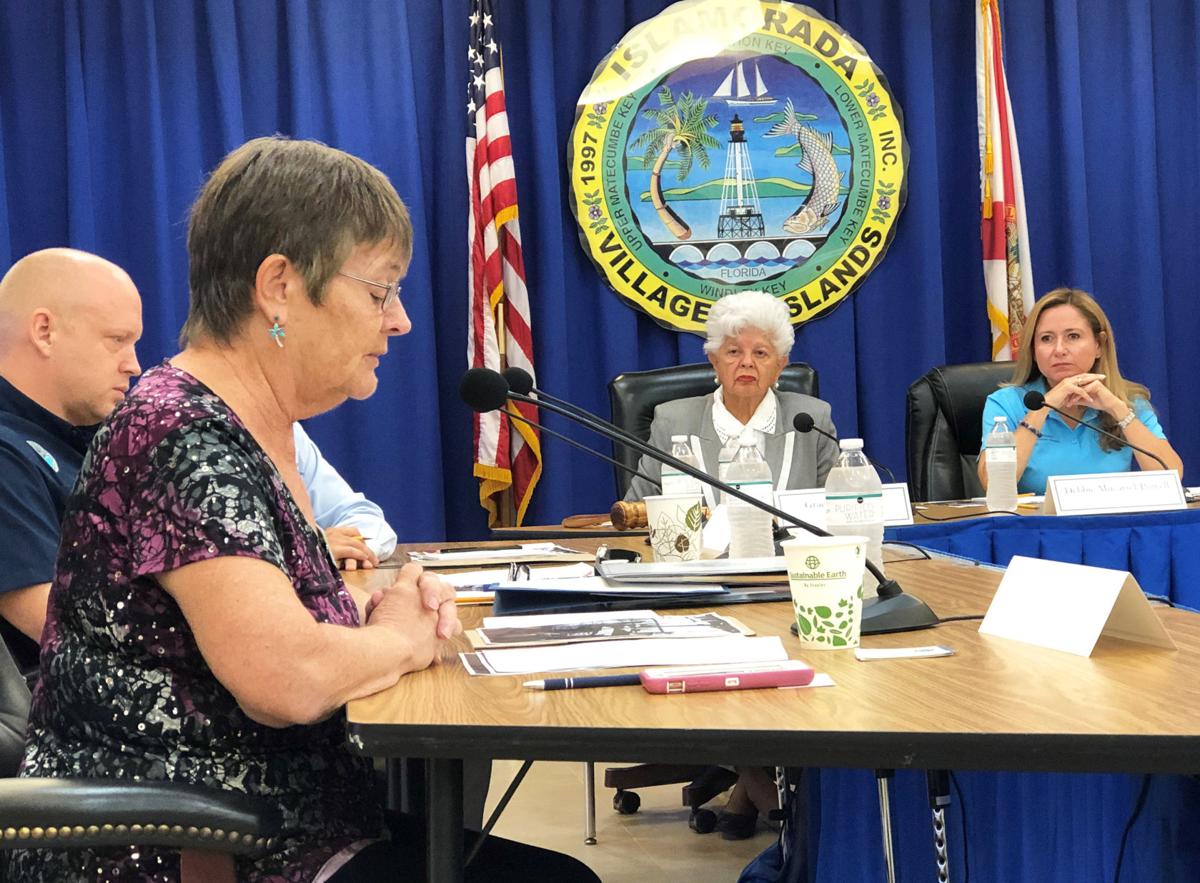 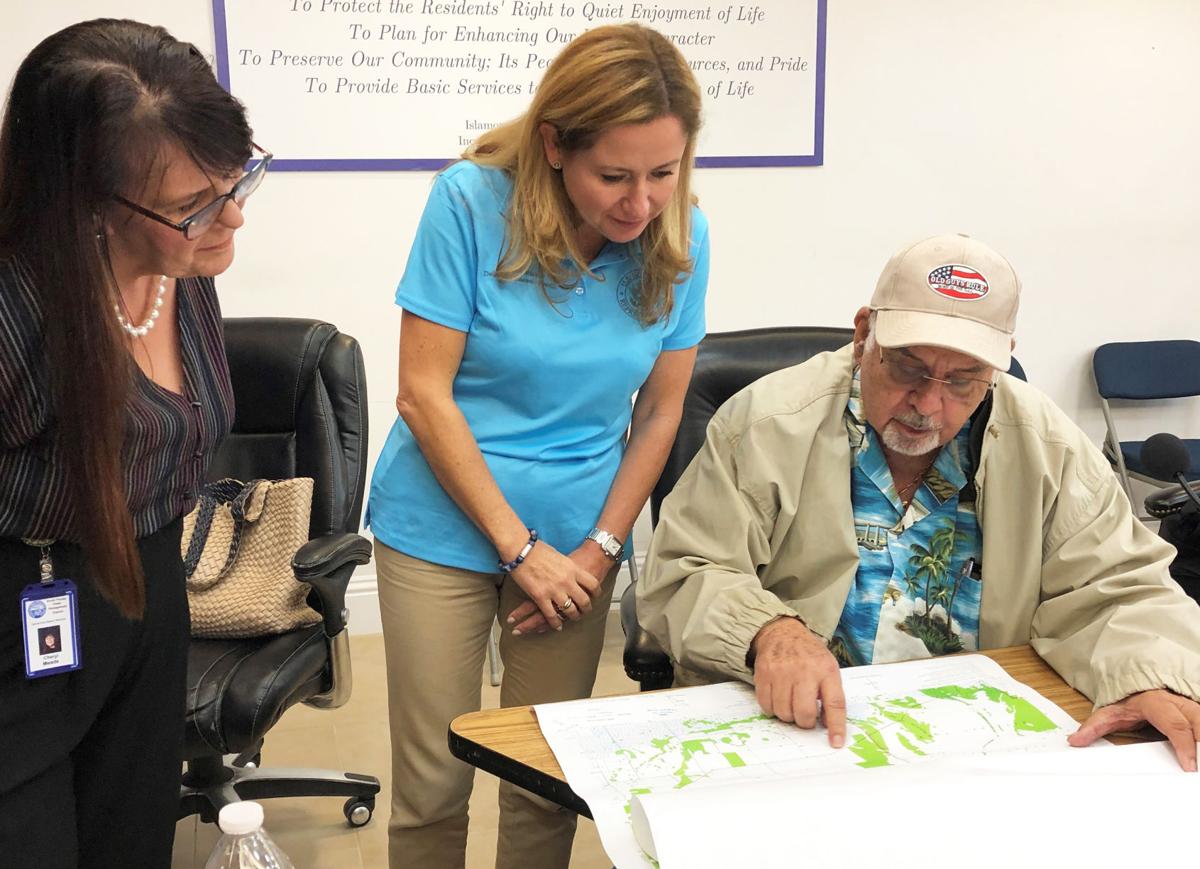 Bill Losner, of Redland, shows (from left) Cheryl Meads from the South Florida Water Management District and Rep. Debbie Mucarsel-Powell maps from  1953 and today, llustrating the impeadment of water flow into Flamingo.

Bill Losner, of Redland, shows (from left) Cheryl Meads from the South Florida Water Management District and Rep. Debbie Mucarsel-Powell maps from  1953 and today, llustrating the impeadment of water flow into Flamingo.

Rep. Debbie Mucarsel-Powell brought together many points of view to expedite the cause of water quality, quantity and management throughout Miami-Dade and Monroe counties.

As Napolitano opened the meeting, she emphasized that the committee needs to hear what the infrastructure needs are for communities to be targeted by the Water Resources Development Act for 2020, including flood control, navigation, environmental restoration and upkeep of water infrastructure.

Mucarsel-Powell shared “Water is life” – noting in the Florida Keys and Homestead, clean water is needed not only to drink, but for commercial and recreational fishing, tourism with clean swimming and beaches, and irrigation for the South Dade farming industry. She noted they all are tied to an

abundant, clean water overflow coming south from Lake Okeechobee. She states that she has been working on this issue since even before she was sworn in, frustrated that the Comprehensive Everglades Restoration Plan (CERP) was passed over 19 years ago, and still yet to be completed.

“Time is a luxury that we just don’t have. We’ve seen massive sea grass die-offs. We’ve suffered from the blue-green algae and the red tides. Our biodiversity is decreasing. And our precious coral reefs are dying at an alarming rate. That’s why it’s so important that we all work together.”

Each stakeholder had five minutes to discuss their issues.

Islamorada Mayor Deb Gillis spoke about how critical Everglades Restoration is to the water quality of the Florida Bay, which is the lifeblood of the Keys. She states the main source of income comes from tourism, including $4.5 billion earned from the fishing industry. Over 4 million tourists visit the Keys annually. “It is only possible with the pristine waters that surround us,” Gillis said. She also noted that the Keys have spent over one billion on a centralized sewage system, eliminating septic tanks.

State Senator Jose Javier Rodriguez is a member of the Agriculture and Resources Appropriations committee, and the closest sitting member to South Dade and the Keys.

Secretary Noah Valenstein, of the FL Dept. of Environment Protection reiterated that urgency is needed, and that empowering the state through federal block grants could reduce the time it takes to get things done.

Michael Rubin represented the Florida Ports Council. He described $4 billion in projects, primarily navigational needs, have been identified for our seaports in Jacksonville, Miami and Port Everglades. He stated the Chinese are making inroads utilizing ports close by including Panama, Cuba, Jamaica and the Bahamas.

Rubin noted that Port Everglades is vital in that it brings in most of the fuel for not only the population but also for aviation at Miami and Fort Lauderdale airports.

Mary Barley, director of the Everglades Foundation, noted the major problem is the slow pace of projects by the Army Corps of Engineers. “Bursts of speed happen only around election cycles or for natural disasters like algae blooms. Delays only bring higher costs.”

Cheryl Meads, of the South Florida Water Management District, noted that in 2015 the Florida Bay had a large seagrass die-off due to high salinity. She sees a cycle of wasted money as projects change, slow down, get put on a shelf, and then when work begins again, regulations have changed and

planning has to start from scratch, increasing costs and wasting money

Dr. Jayantha Obeysekera, is a sea level rise expert from Florida International University. He noted that a neighborhood in North Key Largo has now been underwater for 45 straight days. He feels this is only going to get worse and that it has to be included in the overall planning going forward.

The feeling in the room was that they need to meet as a collective stakeholder group with the Army Corps to push urgency and expedite completion of projects.

The participants discussed that there are still over 90,000 septic tanks in Miami-Dade County, that are now older and leaking into the groundwater. Mucarsel-Powell thinks that if the federal government could put up matching funds it may get done. Sen. Rodriguez noted with the water table rising it is a critical public health need. Rep. Napolitano feels the state is going to mandate remediation, and force Miami-Dade to go to public sewer. Mayor Gillis shared that it doesn’t just effect Miami-Dade. The contaminated water flows south right into the Florida Bay and the Marine Sanctuary.

Mucarsel-Powell continued to ask how we can expedite the process. The Army Corps has a process, and after receiving funding took three months to study how long the planning process would take, concluding that it would take an additional 19 months. Valenstein said that you are never going to speed up the process on a federal level, but maybe if you’d change the system and empower the state projects could be completed. Mucarsel-Powell worried that if the state is in control immediate positive change would be affected every four years by the sitting governor. Valenstein disagreed saying the DEP is guided by the Federal Clean Water Act. Mucarsel-Powell said that the Clean Water Act is being diluted by the current administration.

The audience was given the opportunity to speak.

Alex Gill, the executive director of Friends of the Everglades spoke of their frustration in the total lack of progress. He noted “CERP is 20 years into the plan and not one of the 68 projects is completed.” He noted that the real winner of this is the Everglades Agricultural Area, 700,000 acres formerly the Sea of Grass, which utilizes most of the fresh water from the lake.

Bill Losner spoke representing South Dade agriculture and said that the sheet flow of fresh water goes into the South Dade aquifer, flooding the roots, noting if there is heavy rain, then there is above ground flooding as well. “You can’t restore Everglades National Park to the way it was before because there are so many blue-green ponds from the construction of Miami International Airport, which itself was in the Everglades. You’ll have to pump forever.”

Captain Steve Friedman spoke noting that there are no regulations in place for how much water agriculture can use. He also noted sea grass die-offs at Biscayne NP near Turkey Point Nuclear plant and their canal cooling

system. And Big Cypress NP die-offs while there is seismic testing nearby. But Friedman did note that he was at the dock at Flamingo, and he’s seeing increased freshwater flows. And as evidence to that fact noted that for the first time in his 20-year career saw an alligator at Flamingo.