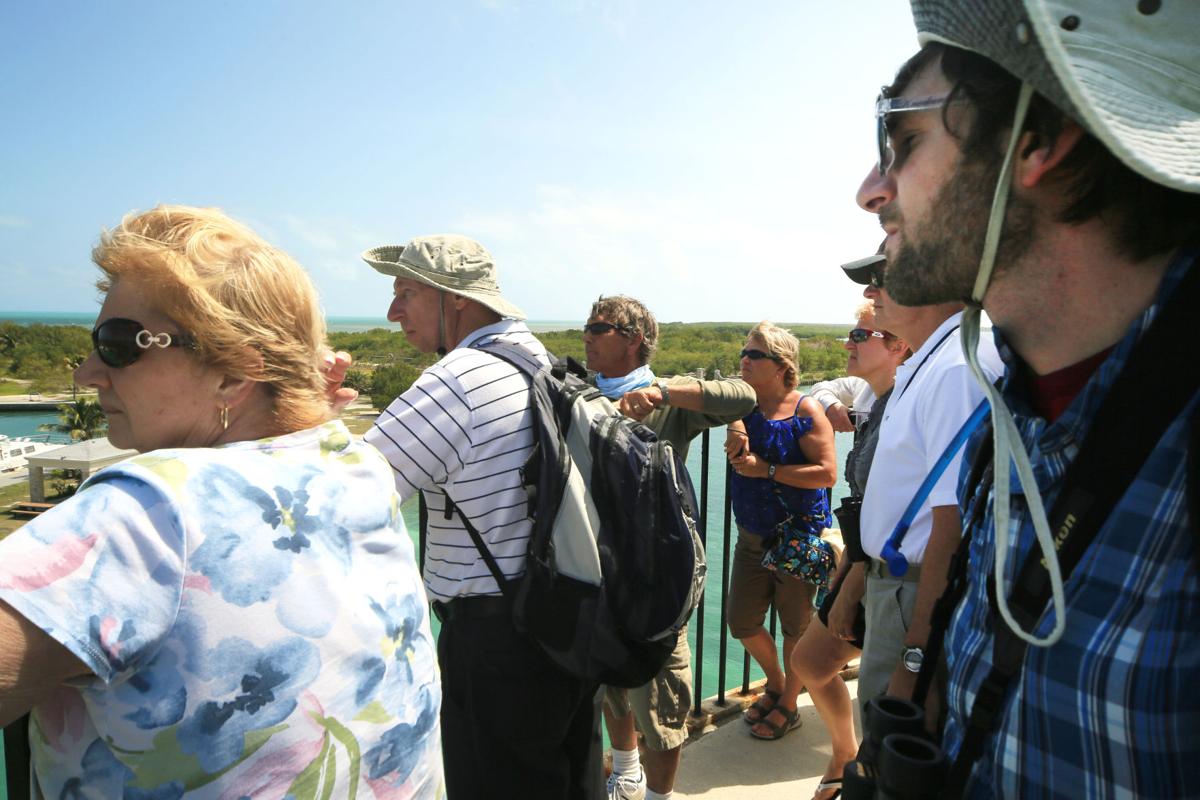 Visitors often climb to the top of the lighthouse at Boca Chita for the spectacular views. 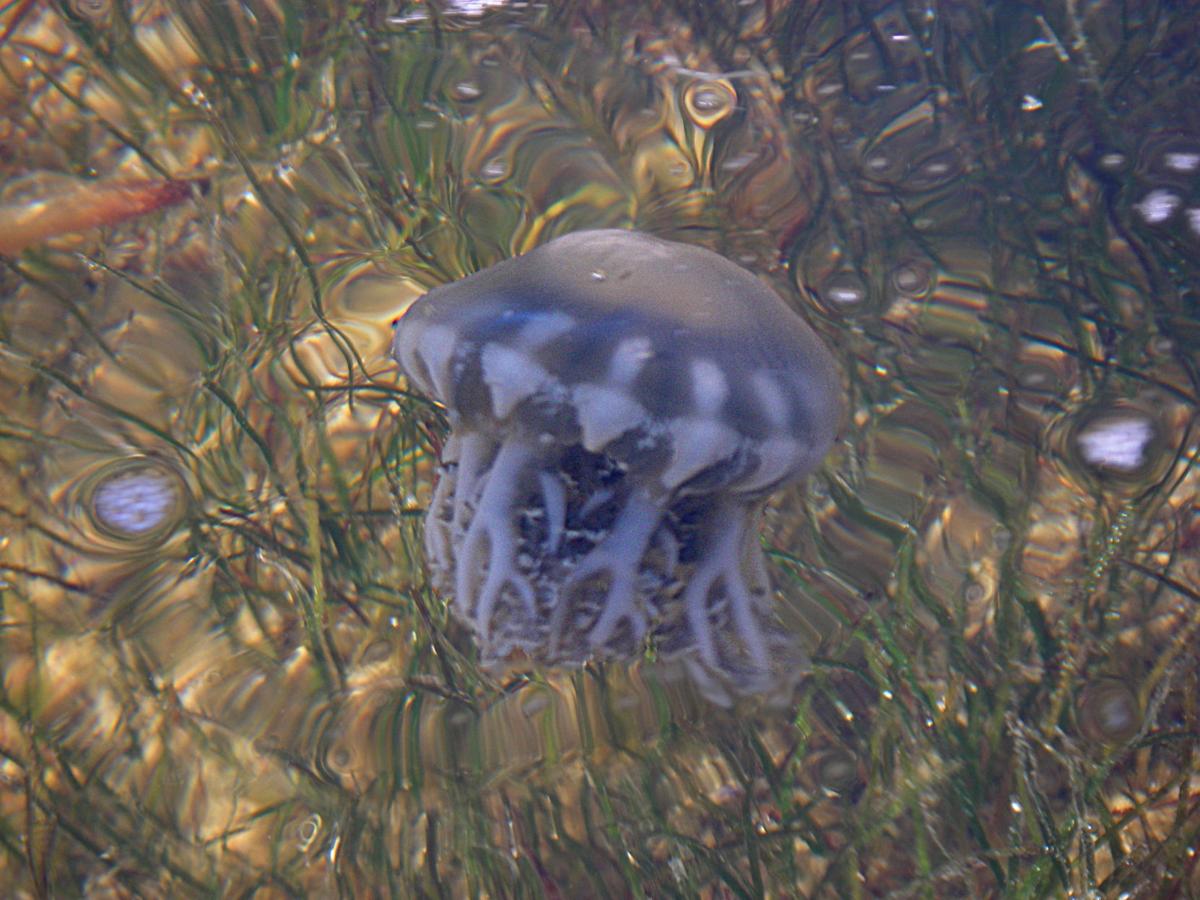 Visitors often climb to the top of the lighthouse at Boca Chita for the spectacular views.

Amethyst clouds sweep over Biscayne Bay. Sunlight filters through gaps in the dark canopy of sky. The light causes the shallow bay to glow in patches of brilliant turquoise and indigo. While this particular display of beauty is unexpected, such wonders are common occurrences in Biscayne National Park.

This is by design. What makes the park distinct from other national parks are its extensive water realms of light, colors, currents, creatures and sounds. Yet the water is just one of the many spellbinding elements. The park protects a rare combination of coral reefs, undeveloped islands, bay waters, mangrove coasts and associated fisheries, and wildlife of the northernmost Florida Keys and southern Biscayne Bay. It is all for the education, inspiration, recreation and enjoyment of this and future generations.

"If we can somehow retain places where we can always sense the mystery of the unknown," Sigurd Olson wrote. "We will find strength and beauty, and our lives will be richer."

Biscayne is such a place. Everyone is the richer for it. What follows are illustrations and descriptions of just some of these wonders.

Some 72,000 acres of one of the largest coral reefs in the world and thousands of individual patch reefs are located in the park. Unique marine habitats and nurseries sustain diverse native fisheries and support world-class recreational fishing for spiny lobster, snapper, grouper, tarpon and bonefish.

Spectacular scenery includes sunrises and sunsets full of radiant and shimmering colors. Even after the sun goes down, moonlight speckles the sea surface for as far as may be seen. None of the beautiful displays by the sun or moon are ever the same. Nature surprises and delights park visitors with its unpredictable and limitless combinations of shapes, colors, forms, sounds and movement.

Speaking of the unexpected, sometimes park scenery actually comes alive. A paddle in Jones Lagoon, in the southern end of the park, brings contact with remarkable creatures that - as if by magic - seem to change from stationary plants to moving animals. As you approach, the creatures remain virtually motionless on the bottom of the lagoon, looking like plants. Not until you get within pouncing distance do they begin to move. It may seem spooky, but they do not actually pounce. They are also small and brainless. The creatures are Cassiopeia jellyfish. Upside-down, as they often appear, their tentacles look like plants waving in the water. It is astounding to watch a group of these jellyfish make their magical transformations.

The park is home to an incredible diversity of animals and plants including more than 500 species of reef fish, neo-tropical water birds and endangered species such as the Schaus swallowtail butterfly and Florida semaphore cactus. Each animal, like the Cassiopeia jellyfish, is magical and wonderful to discover and watch.

Together such biodiversity is the "key to the maintenance of the world as we know it," wrote E.O. Wilson. "This is the assembly of life that took a billion years to evolve. It has eaten the storms, folded them into its genes, and created the world that created us. It holds the world steady." The park protects vital habitats and nursery environments that support this biodiversity including mangrove forests, fragile coral reefs and the extensive seagrass beds of Biscayne Bay.

There are amazing stories to be discovered of pioneers, pirates, pineapples, presidents, explorers, settlements, agricultural and maritime activities, conservation movements and more. A visit to the park's Boca Chita lighthouse is a window to the region's nautical past.

The park provides rare opportunities to experience mostly undeveloped Florida Keys, bays and coral reefs. It is accessible to millions of people in the Miami metropolitan area who enjoy a multitude of recreational activities, including fishing, diving, snorkeling, wildlife-watching and boating.

To realize the splendor, mystery and wonder of the park for yourself, all that is needed is an open mind, alertness for opportunities and reverence for beauty. There is so much waiting, like an upside-down jellyfish in a placid lagoon, to be discovered and enjoyed.

Matt Johnson is the Public Affairs Officer at Biscayne National Park. Though schooled as a lawyer, he was educated at eight national parks from Florida to Alaska. For more information about Biscayne National Park please visit the park website at nps.gov/bisc or follow the park on Facebook, Twitter or Instagram at “biscaynenps.”