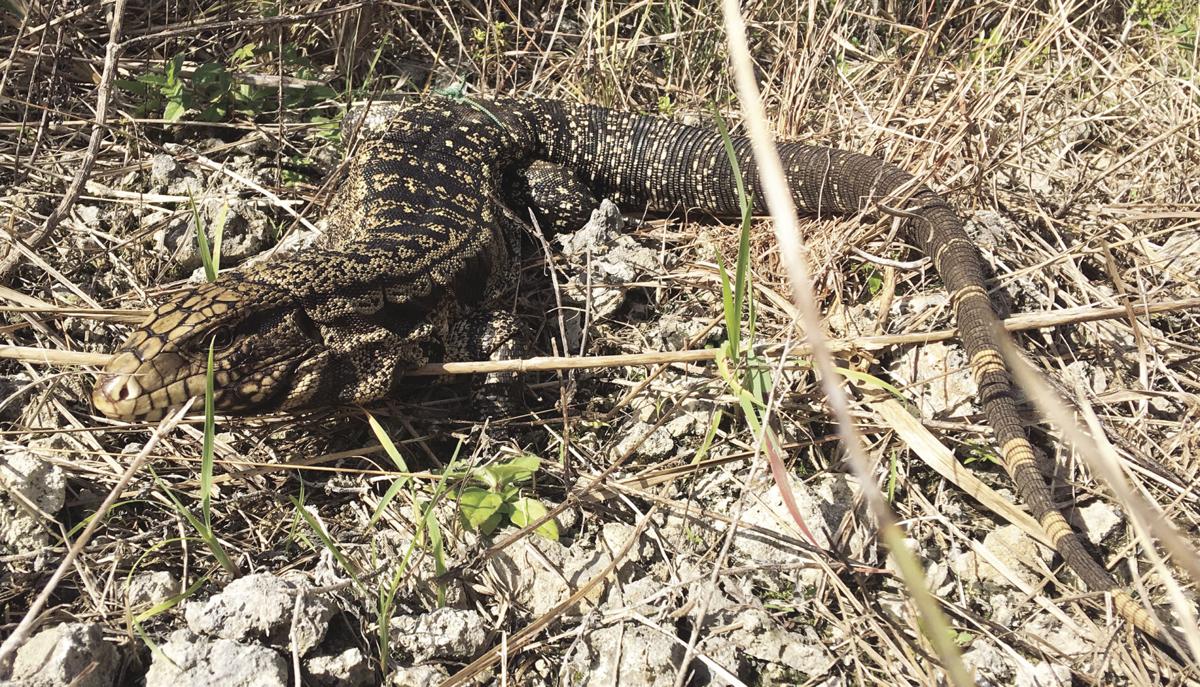 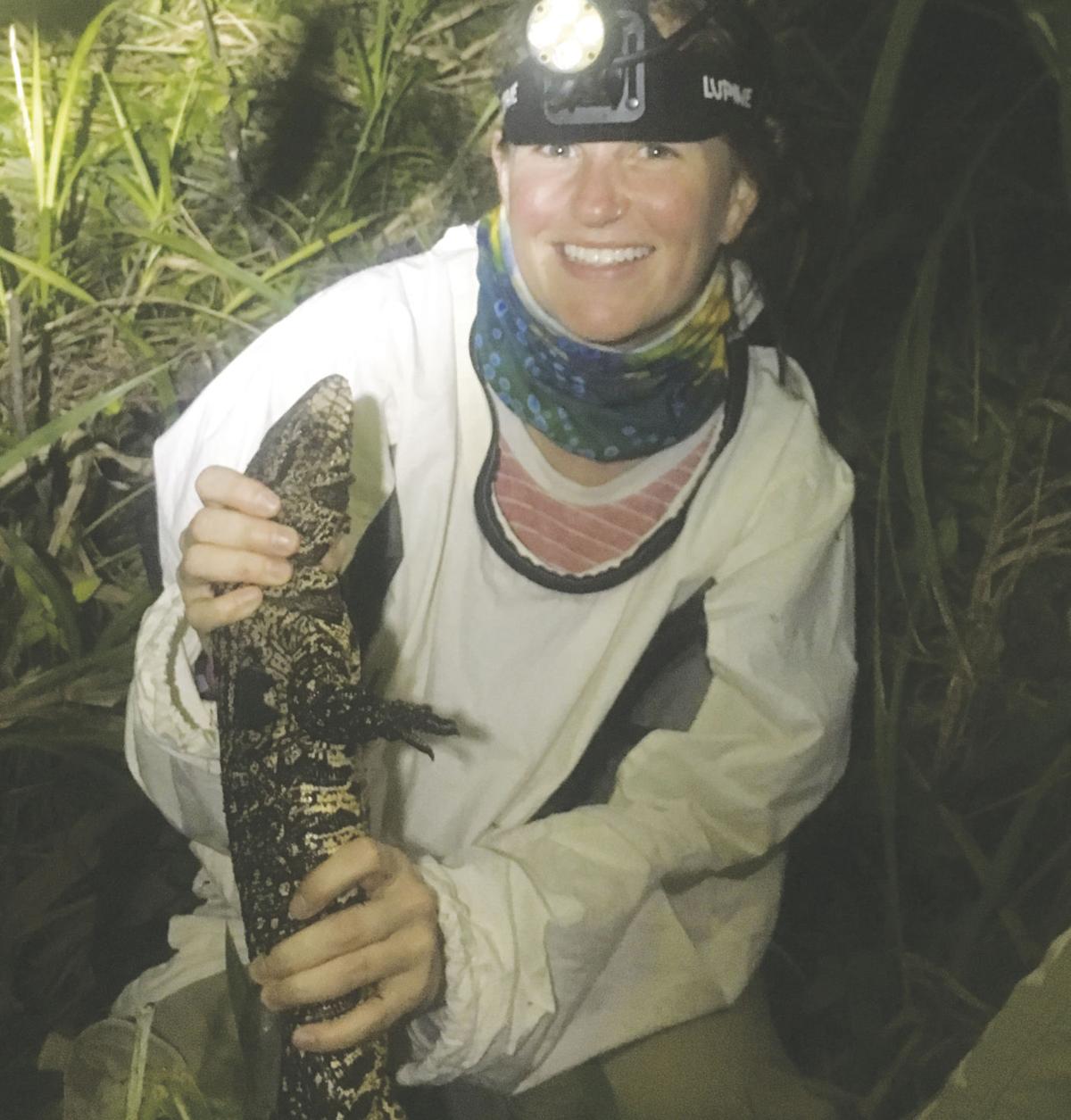 “Do you want to help catch a tegu tonight?” asked my biologist friend.

And this is how in early October 2017, I learned the thrill of catching a large, invasive lizard that can move very fast. I was helping a USGS biologist catch a radio-tagged tegu before it went into brumation, a state of hibernation, ahead of the South Florida winter.

We had to catch this tegu to change its transmitter. Tegus grow fast. Adults can grow up to four feet, so they need transmitter size upgrades several times a year.

Scientists track tegus using these transmitters and radio telemetry to locate their position in the wild. Tracking tegus teaches us which habitats they prefer, how far they travel, and where they go during the winter months. This information can also help us accomplish the ultimate goal: keeping tegus out of Everglades National Park and other ecologically sensitive areas.

Native to South America, tegus are not supposed to be in Florida. There have been reports of three species of tegus in Dade County: the Argentine black and white tegu (Salvator merianae); the red tegu (Salvator rufescens); and the gold tegu (Tupinambis teguixin).

That night we had to catch an Argentine black and white tegu. This species is of most concern to park scientists because there are several well-established populations adjacent to Everglades National Park.

Catching a tegu is difficult because fieldwork is always challenging. I knew this going into it, but I had limited experience in the Everglades. The hot, humid weather, even in October, mixed in with every insect trying to bite you and every plant trying to stab you, toughens you up. I’d argue that South Florida

biologists are some of the toughest in the world.

We met up once it was completely dark because that’s when tegus tend to slow down, which makes them easier to catch. Finding the tegu took some time because it can be tricky to pinpoint a correct location. Many factors, including too much vegetation, can throw off the transmitter signal.

When we finally got a strong signal, it was directed towards very dense, thorny vegetation. But when science calls, you go. So off we went into that

intimidating terrain. I was drenched in sweat, could hear all the mosquitoes around my bug jacket trying to bite me, and kept tripping on rocks and plant roots. But I was so pumped. It was tegu time!

We continued triangulating the tegu until we were somewhat sure we had zeroed in on it. Then, we started to dig. Tegus are active during the day and will find a place to hide, usually by burrowing, at night. After what felt like forever, but was probably a few minutes, we heard some scampering, and the lead biologist acted quickly. You need to be really fast to catch tegus, and you have to know what you’re doing. A bite from a tegu could do some serious damage. Before I could really process what was happening, she had already jumped at the large lizard and caught it. I was impressed.

Tracking these tegus is critical work. Scientists at the National Park Service, the Florida Fish and Wildlife Conservation Commission, the University of Florida, and the U.S. Geological Survey are monitoring the tegus in South Florida because of the potential impact they can have on the environment.

“Tegus are do-everything lizards,” explains Bryan Falk, the supervisory invasive species biologist at Everglades National Park. “They are happy in many different environments, whether that is a natural or disturbed habitat. We once had a report of a tegu living in a dryer vent in someone’s house in Homestead. They will also eat almost everything, including small mammals, carrion, eggs, fruit, pet food, insects, and more.”

Tegus are a successful invasive species in part because they are so adaptable. Unfortunately, this adaptability also makes tegus very easy and popular pets. A pet red tegu named MacGyver has an impressive 177,000 followers on Instagram. And their popularity as pets is the reason they wound up here.

Tegus were first reported in the Miami-Dade area about a decade ago as escapees from the pet trade. Since then, over 6,000 tegus have been removed from Dade County. What is most troubling is that the number of tegus seems to be increasing exponentially. Less than 200 tegus were trapped in 2012, but over 1,000 were trapped in 2017.

To make matters worse, the areas where they are being trapped are getting closer and closer to the park.

We already know that tegus will have negative effects on our native wildlife and put endangered species at risk. Again, the reasoning for this goes back to their adaptability. Tegus will live in many kinds of habitats and would be happy to call Everglades National Park their home. They will eat almost anything, and of most concern is that they love to eat eggs. Tegus were first documented eating alligator and turtle eggs in 2013.

The concern is that if tegus get into the park, they could eat the eggs of protected native species like the American crocodile, sea turtles, and ground nesting birds like the federally endangered Cape Sable Seaside Sparrow. If they make it to Key Largo, they might put the federally endangered Key Largo woodrat at risk for extinction. Turkey Point is home to a population of American crocodiles, and the introduction of tegus there also puts that population at risk.

While it’s not likely we can rid Florida of all the tegus, we can work to keep them out of these sensitive areas. Park scientists are working hard to do this, but they need your help.

“Containment is possible,” Falk said, “and our best bet is early detection.”

The more tegus reported means that biologists can act quickly to remove them and prevent a range expansion.

The more eyes on the ground, the better.

Tegus are now emerging from their winter brumation. We need your help to report sightings!

If you see a tegu, please report it to the invasive species hotline:

• By downloading the IveGot1 reporting app

This will help park scientists and local agencies decide where to put tegu traps, and could enable us to remove tegus before new populations become established.