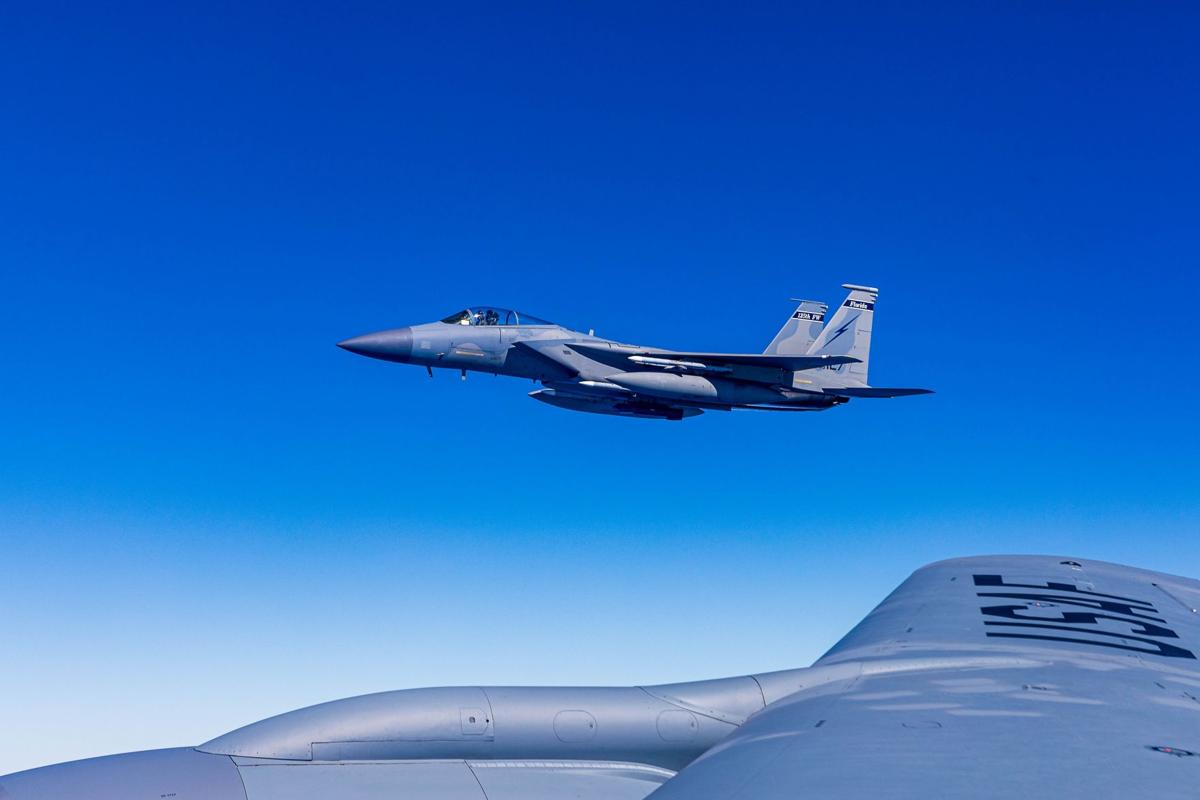 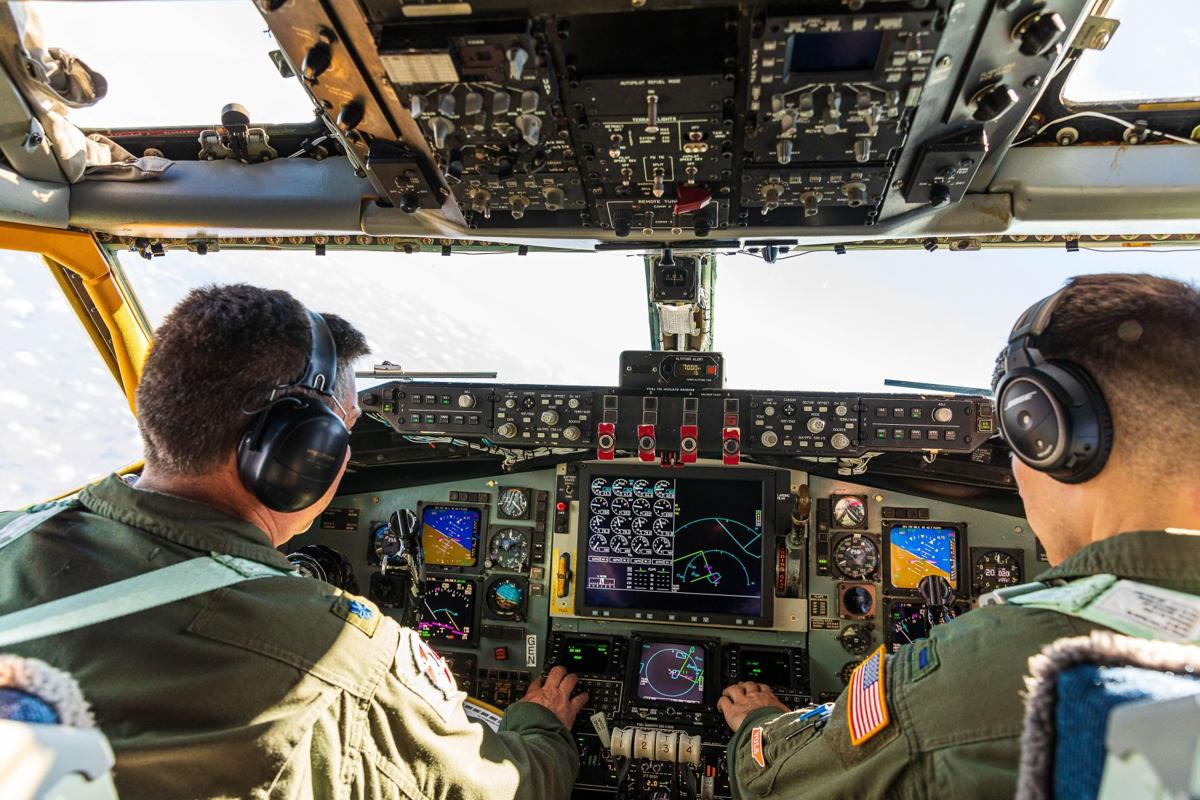 LTC Brad Cook and 1LT Alex Narica fly the KC-135 which was manufactured in 1959. 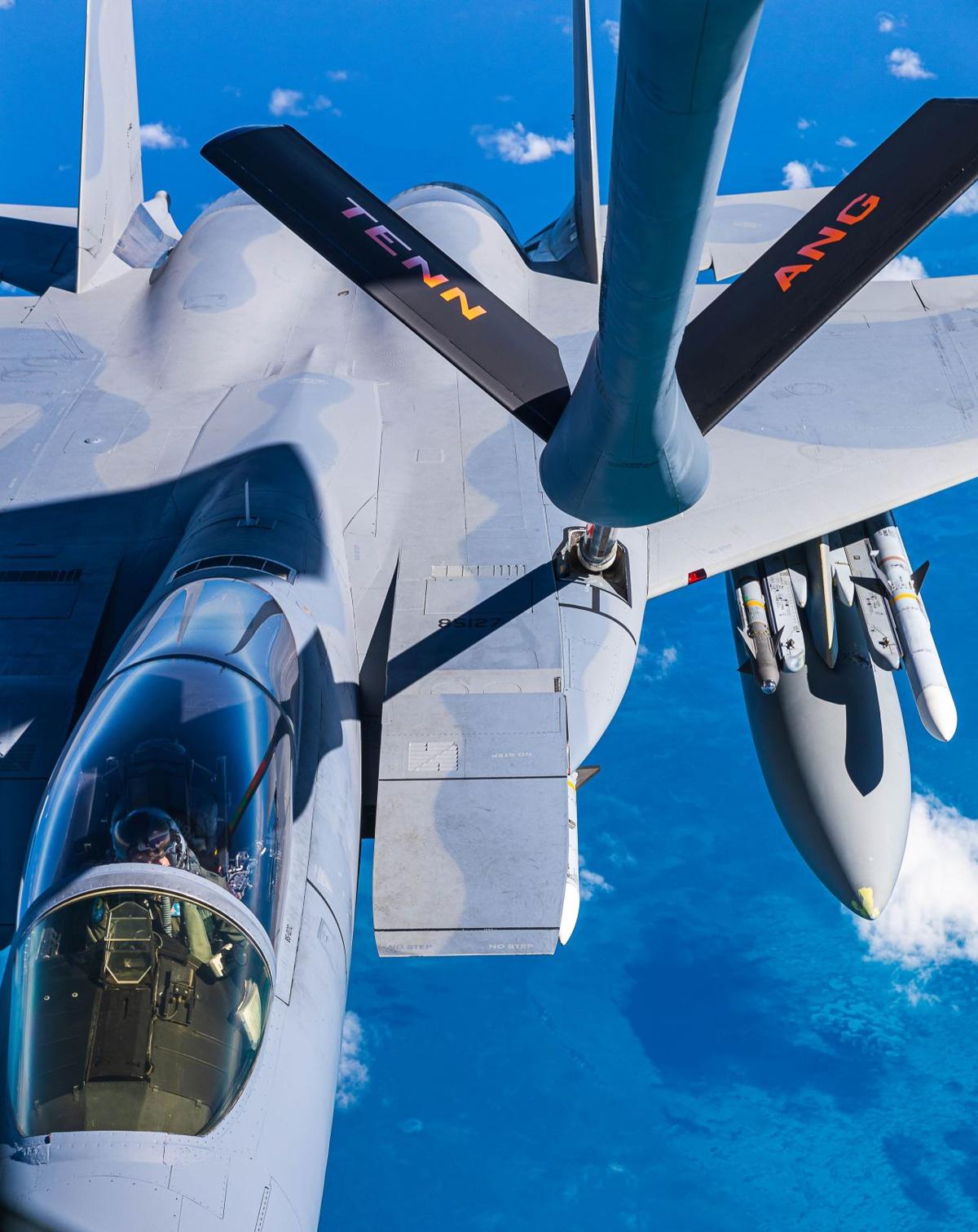 A F-15 from the Florida Air National Guard’s 125 Fighter Wing is refueled by a KC-135 tanker the Tennessee Air Guard. Boom Operator SSG Briana Linquest has plugged the efueling probe into the F-15’s inlet while both aircraft are flying at over 300 miles per hour.

LTC Brad Cook and 1LT Alex Narica fly the KC-135 which was manufactured in 1959.

A F-15 from the Florida Air National Guard’s 125 Fighter Wing is refueled by a KC-135 tanker the Tennessee Air Guard. Boom Operator SSG Briana Linquest has plugged the efueling probe into the F-15’s inlet while both aircraft are flying at over 300 miles per hour.

Many “threads” make up the security net for before, during, and after all the

According to Michael O’Harra from the Federal Aviation Administration (FAA), 2,500 additional flights are anticipated in the area during this timeframe. For Lieutenant Colonel Alex Edwards, Commander, Florida Air National Guard 125th Fighter Wing, Detachment 1, it’s likely to mean even busier days than usual.

The unit at HARB is part of North American Aerospace Defense Command (NORAD), tasked with, “24/7, 365-day mission of protecting our nation’s skies”. Residents who see the Detachment’s F-15 Eagle jets streak into the sky often don’t realize these are usually a response to an alert call.

“Every day is relevant for us,” Edwards said. “We work our training around alerts.”

As one of the busiest Alert Sites in the United States, highly skilled crews have the pilots launched within minutes of notification of an incident. Drug traffickers, hijacked aircraft, and unidentified aircraft that have no flight plan on file are the type of situations they respond to. Part of Superbowl air space security measures are increased Temporary Flight Restrictions (TFR) regarding how close aircraft can come to specified areas.

While the FAA has issued multiple notifications for pilots and airlines, there will no doubt be unwitting violations that can be easily handled. Preparation though is for anything that does or seems to pose a threat.

NORAD’s decision to bring in the air refueling capability means aircraft will not need to return to base for fuel. Staff Sergeant Briana Lindquist, who joined the Air National Guard at age seventeen to do maintenance for the Stratotanker, retrained three years ago to become a boom operator for refueling. She loves her job and although she’s flown plenty of missions, this is her first time to be in an operation like the Superbowl.

Customs and Border Protection teams stationed at HARB will have their aircraft aloft as well. Todd Gayle, of the Air and Marine Operations, has come from El Paso, Texas as one of numerous agents brought in to augment local teams. The 23-year veteran explained the sophisticated on-board cameras enable more “eyes in the sky” with the ability to transmit information to the

command center in almost real time. Zack Mann, a special supervisory agent for thirty years before taking a position in the Miami office as Spokesman, said the Black Hawk helicopters can also be used for rapid response if special teams from Miami-Dade Police or other organizations need to be quickly

transported. Among other ground-based tasks, Customs and Border

Protection X-ray technology will screen vehicles, especially those delivering equipment and supplies into the stadium area.

The Civil Air Patrol, the civilian auxiliary to the U.S. Air Force, was on the flight line, too. The Florida Wing serves the community with Emergency Services, Cadet Programs and Aerospace Education through real-world missions, training exercises, and engagement across Florida. First Lieutenance Todd Wean, Director of Mission Support with the Florida Wing, flew the Cessna 182 in the exercise to serve as an “intercept target” to help test the system in place to protect the temporarily expanded airspace restrictions. Although the day’s exercise was specifically focused, this is actually a mission they routinely provide to NORAD.

Information Office, outlined the full force of municiple, county, state, and federal agencies brought together to take actions as required. There is,

however, a part for citizens to play.

Suspicious activity should be reported in the phrase of, “See something, say something.”

Fans will have checkpoints to go through and they will see a heavy security presence. What they won’t see are the myriad teams behind the scenes, all keeping careful watch.