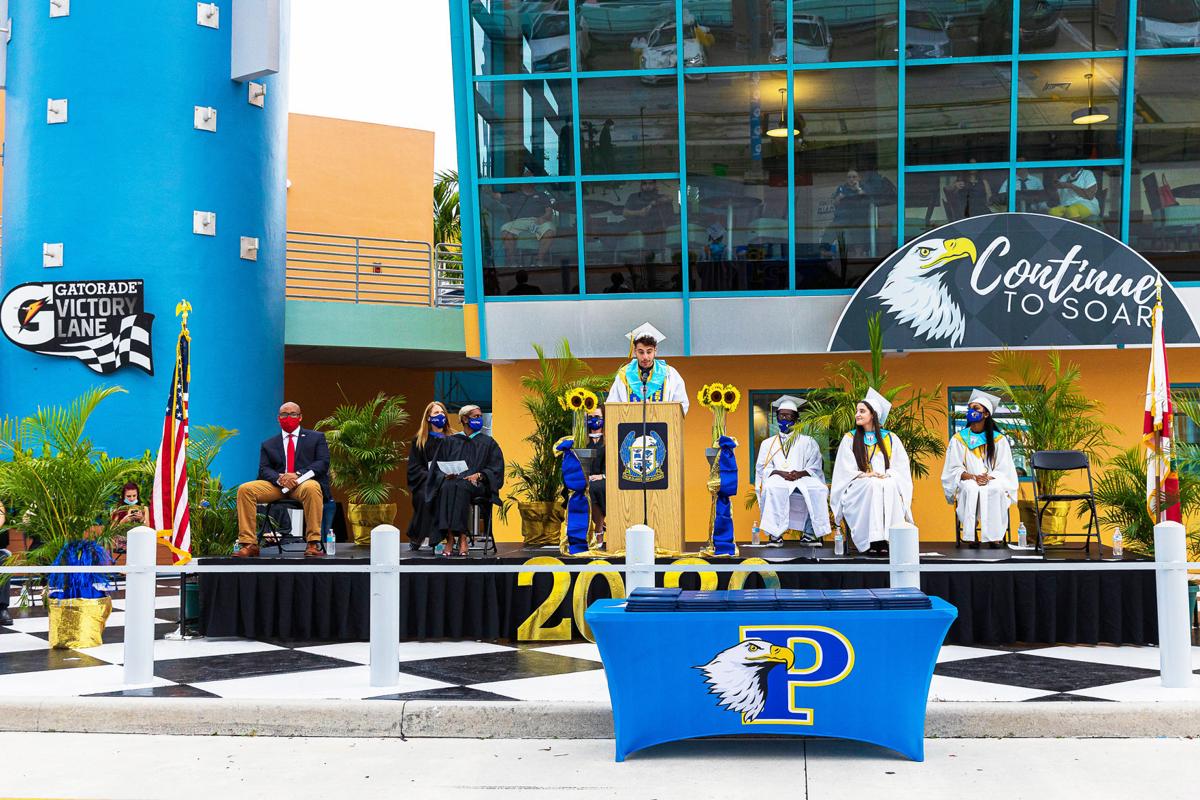 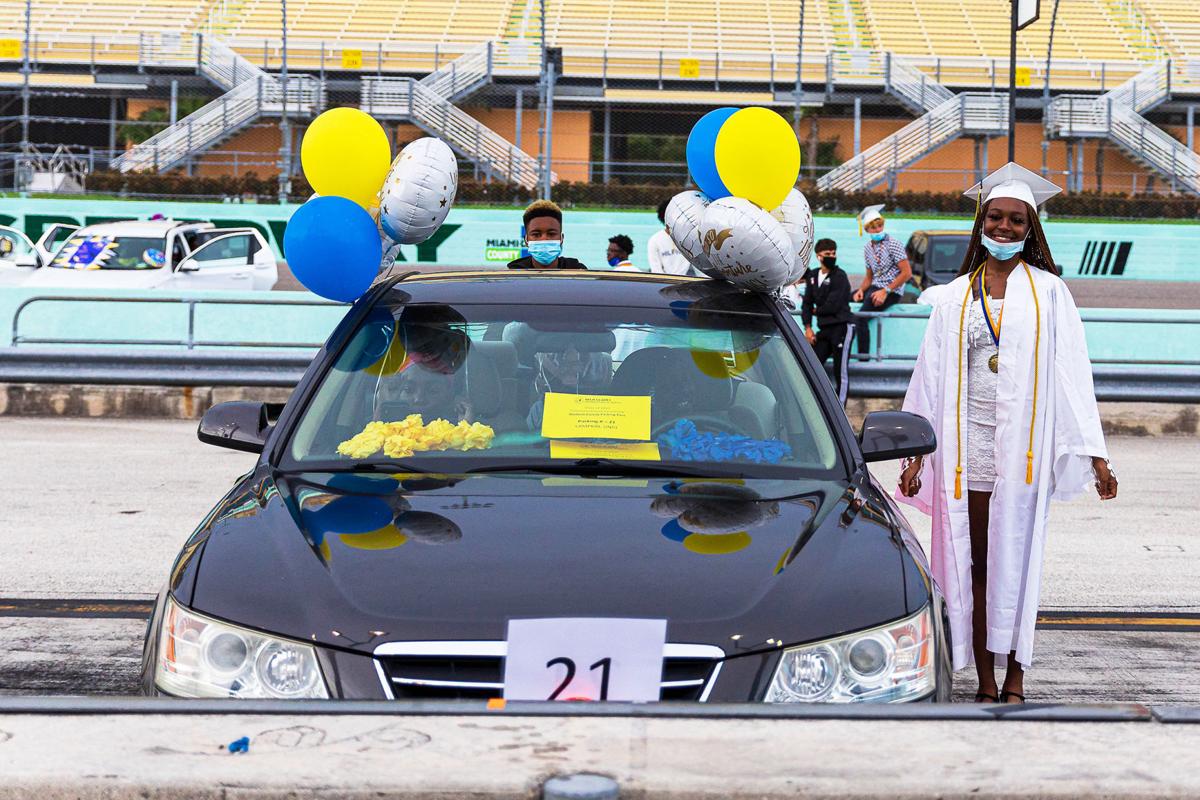 Uniq Lampkin was excited, standing next to her decorated vehicle.

Uniq Lampkin was excited, standing next to her decorated vehicle.

In the effort of finding ways to honor high school seniors who are missing traditional events, “Zoom” has rocketed into everyday language. Another local innovation has been partnering with the Homestead-Miami Speedway (HMS) which does have a great deal of space to accommodate “drive-thru” and social distancing graduations for local high schools On Saturday, June 20, HMS hosted the graduating seniors from Miami’s Columbus High School so that these students would have the opportunity to experience their long-awaited victory lap.

The class of almost 400 from the all-boys, Catholic school received their diplomas at the start/finish line of the famed track, after which they took that lap around the 1.5-mile oval, led by the official pace car of Homestead-Miami Speedway, a Ford Mustang.

“These are challenging times we are all facing, and it’s gratifying to know we’re able to bring some enjoyment for these students,” said HMS President Al Garcia. “They all have very bright futures, and hopefully this is something they will always cherish. To receive your diploma at the same spot where Jimmie Johnson clinched a NASCAR-record seven championships is pretty special.”

"We want to thank Al Garcia and his wonderful team at HMS for helping us bring this amazing and once in a life-time opportunity to our senior class," said Columbus High School President Thomas Kruczek.

“We were looking for a way to really honor our graduates in a manner that was just as unique as they are,” Aisha McQueen, Principal of Palm Glades explained. of ours a reality.”

While there may not be future race car drivers among them, there could well be at least one or two mechanical engineers. These students are definitely willing to work. Aside from succeeding academically despite considerable

upheaval this year, they collectively contributed 13,323-plus hours of community service.

secondary or vocational careers and have different academies they can select from. It is a full-service school with sports and clubs.”

Decisions of post-graduation do vary.

Travis Johnson, a Senior Class Representative, will be going directly into the U.S. Air Force. In fact, he was selected to introduce the Keynote Speaker, Chief Master Sergeant Katdo Robinson of Homestead Air Reserve Base (HARB). In his remarks, Robinson spoke briefly of the service Johnson would be giving to his country and of the Air Force core beliefs of Integrity, Excellence, and Service Before Self.

During their respective Salutatorian and Valedictorian addressees, Elisabeth Gonzalez and Jordan Sardinas injected humor into some of the special challenges for the year and gave encouraging advice to their peers and younger students. They thanked teachers, staff, especially Mr. Karl Bell, Senior Class Sponsor, as well as their parents.

She not only completed over 750 hours in community service but did not allow personal hardships and heartaches experienced during the first half of her senior year to stop her from finishing on top.

Conferring the diplomas was a blend of tradition and adaptation. The senior was in the passenger seat of the vehicle driven by parent or designated relative/friend. Their name was called, the vehicle rolled slowly

forward, then stopped. The senior got out, walked a few steps to

receive the diploma and returned to the vehicle where it moved up to join the line that would make a “Recession Victory Lap” after. And yes, horns blew and decorations like “20/20 Balloons” were very much on display.

On Tuesday, June 23, the track held a similiarly inspiring graduation

ceremony and victory lap for Chambers High School of Homestead.

Chamber Principal Dan Walke was excited for the school and the graduates saying, “I wanted to create an epic graduation experience and memory for our

graduates. What better place than the Homestead-Miami Speedway and their historic championship finish line. Our graduates were so excited about this

opportunity to not only have a physical graduation, but walk across the finish line to receive their diploma and take a lap around the racetrack with their family. While setting up, I had the opportunity to meet the pace car driver. It turns out that the driver was a former graduate of Chambers High School, Dustin Raistrick c/o 2017. It was an honor to lead the graduates on their championship lap with a Chambers High alumni.”