South Dade growers Cheryl and Kern Carpenter (left) and Sam Accursio (right) had the opportunity to speak directly with President Trump about the seasonal vegetable market being swamped by lower priced Mexican competition. 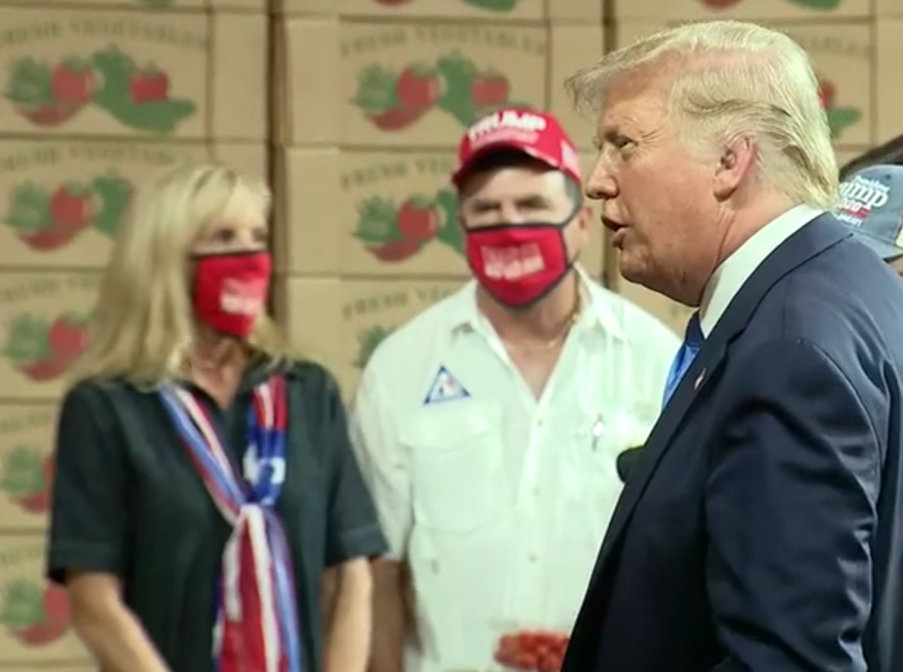 South Dade growers Cheryl and Kern Carpenter (left) and Sam Accursio (right) had the opportunity to speak directly with President Trump about the seasonal vegetable market being swamped by lower priced Mexican competition.

Kern Carpenter and Sam Accursio, both third-generation South Dade farmers, have shared a lot of different experiences. Talking with the President of the United States is now a new one.

As can happen, it started with a telephone call from a friend, Mitch Gaither, one of the owners of Flavors 1st Growers and Packers. They’re in Mills River, North Carolina, close to Hendersonville and Asheville. The severe impact of COVID-19 on the local and national farming communities has made headlines for months. One of the programs the federal government created in response is Farmers to Families, a $3 billion U.S. Department of Agriculture

program that buys food from farmers and provides it to non-profit organizations for distribution to those in need. Flavors 1st is part of this program and they are partnered with Baptists on Mission among others. Ivanka Trump has spearheaded the Farmers to Families program since the beginning. Carpenter noted that all in attendance remarked how the program was put together at record pace for a government service.

Monday, August 24, 2020, President Trump was scheduled to tour Flavor 1st to meet those involved including growers, and oversea the operation of packing boxes and loading them onto refrigerated trucks to be delivered to families in need.

“Mitch said they were contacting participating growers from all around, in Georgia and Florida and invited us up,” Carpenter explained. “We didn’t know what the arrangement was; if we’d be at the back of a crowd of 500 people or so, but decided to go and see.”

Joining Carpenter was his wife Cheryl and Sam Accursio. Carpenter said there was a large area with displays, an area for speeches, and a separate area with tables loaded with produce. They found themselves with twenty or thirty others as President Trump made his way around the tables.

“This was really about the program, but when he asked if we had anything of concern, I made a comment like, ‘We have to keep an eye on what’s happening in Mexico” Carpenter said. To their surprise, the President stopped and asked him to explain the concern. “I told him I was a third-generation tomato farmer from Homestead, and he said he knew exactly where that is and had been through here many times. I said well I have 100 acres of my own, which we just had to mow down, they just went to waste. He genuinely listened when we explained about the market pressure from Mexico. I said Mexico has just about wiped Homestead out as far as growing vegetables, especially in the wintertime. I said there used to be 30,000 acres of tomatoes, now there is less than 1000. The President agreed NAFTA (North American Free Trade Agreement) had been a problem. Even though I’m not sure the new agreement [United States Mexico Canada Agreement (USMCA)] is any better, I did say it might be.”

Sam Accursio said that it's hard to say what affect USMCA will have for South Dade farmers as the agreement just came into affect July 1, which is after our growing season. Accursio said that both President Trump and his Chief of Staff Mark Meadows were very attentive and said, "Let us know if we didn't get it right, and we will fix it."

Accursio said, "Trump and Meadows seemed very concerned that growers can feed Americans, because as we all know it's national security to feed ourselves."

Accursio also noted that it has alot to do with our current President, but "he isn't the only reason why Kern and I were there. We would have gone to see President Obama, President Clinton, we would go to any President given such an opportunity to help agriculture."

Having the opportunity to speak with President Trump and Ivanka Trump one-on-one was a far more personal experience than they’d expected. "He treated us all like he'd known us his whole life." said Accursio.

The major issue for South Dade farmers continues to be the flood of products from Mexico sold in direct competition at local and regional markets. Farming practices and laws enable lower production costs in Mexico which in turn enables their products to have an unfair price advantage over Florida and other U.S. crops.