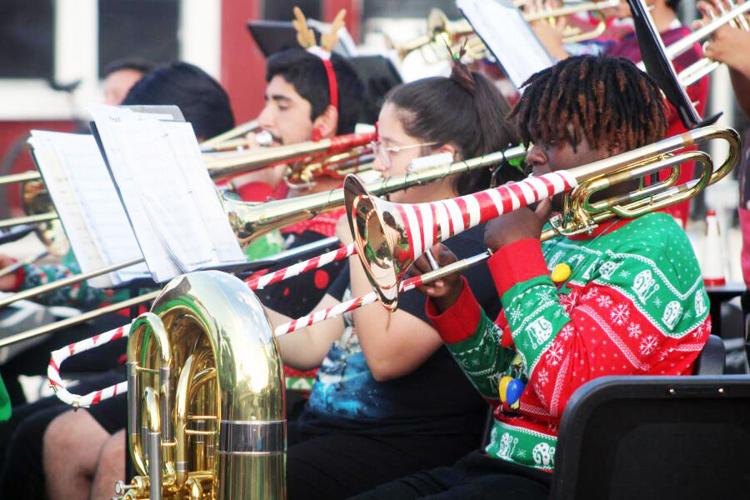 Junior Lakeem Davis plays the trombone, festively wrapped in white and red tape to resemble a candy cane for the occasion. 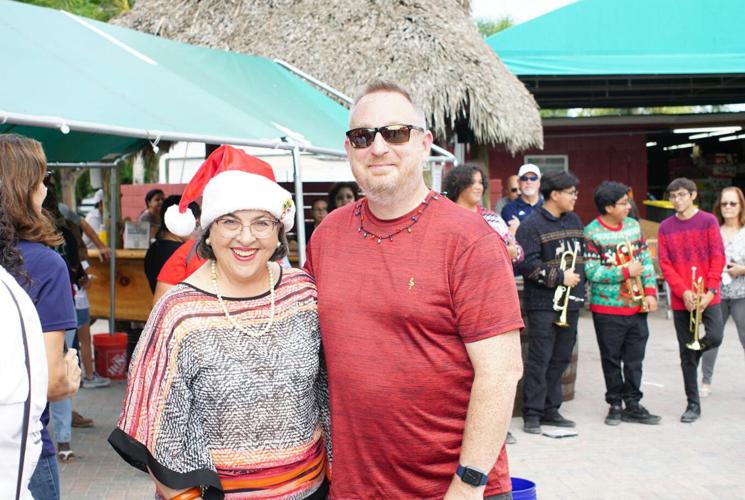 Band Director Scott Davis with Mayor Daniella Levine-Cava after receiving the generous donation to the band.

Famously known for their milkshakes and exotic fruits and vegetables, Robert is Here welcomed the South Dade Senior High School band program at their Holiday Musical and Art Festival on Saturday, Dec. 10th.

Hundreds of customers enjoyed the fun at the festival, where there were raffles, face painting, pictures with Santa, drumming lessons, and more in the hopes of raising funds to reach the band’s goal of purchasing new marching band uniforms.

Starting at noon, South Dade’s different bands, including the marching band, jazz band, wind ensemble, drum line and sax quartet played a variety of Christmas music while customers were encouraged to browse the different vendors and experience the holiday magic.

Mr. and Ms. Claus came in on a motorcycle.

Mayor of Miami Dade County Daniella Levine Cava also came to show her support to the community where she previously served as County Commissioner and to the Buccaneer Bands.

“We care about every aspect of this county, and especially the future,” Mayor Levine Cava said. “The future is our young people. What happens at these high schools is so important, and it’s just great to see young people involved, engaged, and learning skills to keep them moving forward in a positive direction.”

She made a donation to help them achieve their goals and encouraged everyone attending to be generous as well.

Heather Moehling, director of marketing and public relations for Robert is Here, whose son is also a member of the band said, “Music programs are such a great thing for students to be able to have an outlet for their mental health, they are something to empower them and boost them up not only academically but mentally as well,” Moehling said. She also said that hosting the band at the fruit stand was a full circle moment for her and her family. “Robert graduated from South Dade, and my husband graduated from South Dade, so it’s like South Dade has always been through and through with us, and getting to support them in this way has been amazing.”

Senior Gabriela Rodriguez and sophomore Brook Holifield are both in their first year of being in band, and they each are grateful for getting to experience events like the festival. “It was really fun today, we got to do a bunch of different types of music, Christmas stuff and not,” Brook said. For Gabriela, the simpler things are the highlights, like being with friends. “We got to eat some good food, like the nachos, after everything was over with which was pretty nice.”