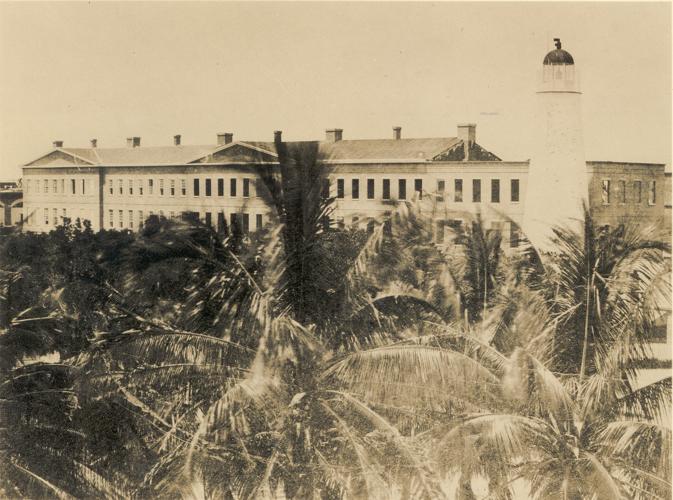 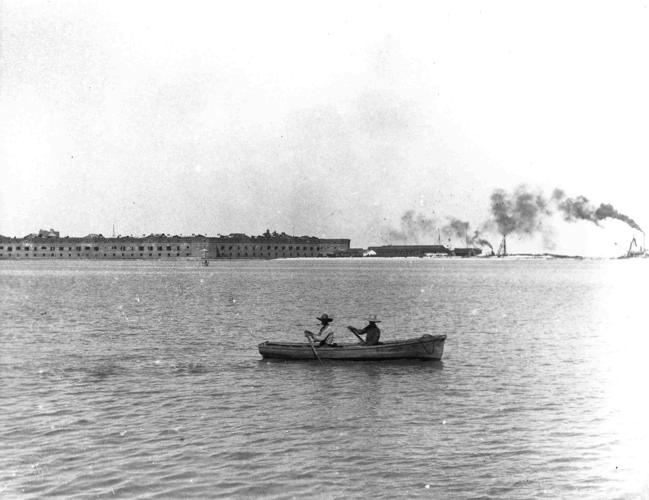 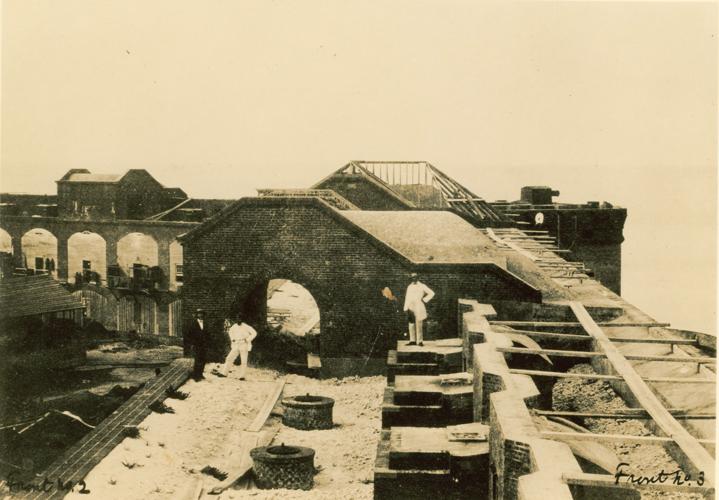 While many national parks are popular exclusively because of their flora and fauna, their awe-inspiring vistas and other natural wonders, Dry Tortugas National Park, consisting of a string of seven coral reef islands, is historically important because of the area’s strategic location and its vital roles in the nation’s maritime, cultural and political history.

The Birth Of Fort Jefferson

From the beginning, in 1513 when Spanish explorer Juan Ponce de Leon discovered the islands at the southernmost gateway to the Gulf of Mexico and at the edge of the Atlantic Ocean, the region was one of contention. Ships from different countries competed with the Spanish for dominance in the deep waters and in the narrow passages among the islands. The Spanish ruled and controlled the lion’s share of lucrative commerce transported to and from the interior.

In 1819, the Spanish sold Florida to the United States, which included the Dry Tortugas. Immediately, a plan was offered to build a fortress on Garden Key, the largest of the islands. But that plan was scrapped. Over time, after piracy become widespread, U.S. Army officers revived the plan to build a formidable gunnery post from which to control ship movement in the region.

This decision initiated the construction of Fort Jefferson on 16-acre Garden Key in 1846. Although work continued for 30 years, the fort was never completed because of inadequate funding, a lack of materials, hurricanes and diseases such as yellow and dengue fevers.

The big guns never fired a shot at an enemy and no enemy ever fired upon the fort. At its peak during the Civil War, Fort Jefferson had a population of roughly 2,000, a mix of military personnel, civilian workers, civilian and Union Army prisoners and black slaves.

Many historians say that Fort Jefferson was an expensive experiment in folly. The never-completed behemoth was appropriately dubbed “America’s Devil Island.” An armada of skilled workers included stone masons, specialty carpenters and blacksmiths. Many were civilians who lived in Key West, 70 miles away, and they were free to come and go.

There also was the legion of black slaves. They were the largest group of laborers during the antebellum era. They endured years of degradation that was sanctioned by the U.S. government and the state of Florida. They lived under the same inhuman conditions that slaves elsewhere throughout the South lived. Most worked wearing leg irons as they did the most dangerous and filthy jobs.

Key West had a large population of white Northerners who brought their black servants south with them. Once in Key West, many of these Northerners leased their servants to Fort Jefferson for $20 a month. On Garden Key, most of the servants became slaves in the strict sense of the term.

Fort Jefferson was also a staging site for slave ships en route to other places with their black cargo. The slaves in transit were kept in what were called “barracoons,” a derogatory name for temporary slave barracks.

Freedom Is A Human Instinct

The hundreds of slaves who toiled for decades in the blistering sun on Garden Key longed for freedom as they stared across the infinite blue waters of the Gulf of Mexico. Not many attempted to escape because of the miles of dangerous reefs, unpredictable storms and the possibility of informants. The Dry Tortugas, it must be stated, was never part of the Underground Railroad, the network of safe houses that helped slaves escape to Canada and to the non-slave states in America.

The best-known attempted escape by slaves began shortly after midnight on July 10, 1847, according to a National Park Service publication. Seven slaves fled Garden Key after they commanded all of the sea-worthy vessels, three schooners and the small boat belonging to the lighthouse keeper, and set off to the west toward Loggerhead Key. They left behind the Victor, an old vessel that was in bad shape.

The escape was not discovered until the next morning. By then, the escapees had crippled three of the boats on the island, and the seven had sailed away in the schooner Union. With daylight, the Garden Key lighthouse keeper spotted the Union about 15 miles away and alerted officers at the fort. The Victor was quickly repaired, and its crew of eight men pursued the escaped slaves. Because there was no wind, the crew had to use oars,

Knowing they were dealing with seven wily and courageous slaves, the pursuers pulled their oars to the maximum and were closing the gap. The slaves knew their pursuers were gaining on them, so they destroyed the masts on the Union, disabled the rudder and crowded into a small boat. They pulled southward.

Meanwhile, an approaching storm forced the government men to return to Garden Key, where they arrived at midnight. Somehow, the slaves survived the violent storm. Pulling their oars for two days, they went eastward along the Florida Straits. When they reached Key Vaca, 120 miles east of Fort Jefferson, they were spotted and several ships gave chase. The slaves’ abandoned boat was found a day later on Long Key.

“Coming ashore, the pursuers began firing their weapons in an effort to frighten the fleeing men,” according to the National Park Service. “To avoid capture, the freedom seekers ran for the beach on the other side of the island, near Indian Key, and then desperately fled into the water. The chase finally came to an end as a boat from the sloop Key West grabbed the fleeing men from the water and took them to Key West. After an exhausting journey, the men had ultimately failed in their quest for freedom. Two leaders in the group were returned to their owners (in Key West), and the remaining five were sent back to Fort Jefferson.”

A lesser-known escape from Fort Jefferson was written by a white soldier, whose pen name was A.O’D. The article appeared in Galaxy magazine in 1869. The escape involved the white prisoner Adair and an unidentified slave. The escape is noteworthy because it exemplifies the treachery slaves faced whenever they contemplated freedom and tried to escape.

A.O’D. writes that one night Adair and the slave squirmed through the casements of the fort, found a large plank and miraculously traveled to Loggerhead Key. There, they stole a small boat and sailed to Cuba. The escapees probably could have remained free, at least for a while, if Adair had not been a scoundrel, if he had valued the life of his companion. He tried to sell the black man back into slavery.   The betrayed black man told the Spanish authorities all about their escape. Both men were taken back to Fort   Jefferson in leg irons.

In many ways, the Civil War was a tragedy for the nation. For slaves at Fort Jefferson and others destined to wind up there, however, the war brought salvation.

The National Park Service aptly sums up the ironic implications of the Civil War (1861-1865) for blacks:    “Enslaved African Americans endured countless hardships during the construction of Fort Jefferson. By 1863 the use of enslaved peoples was discontinued at this remote outpost. African Americans returned two years later, not in bondage, but as soldiers. No longer denied their freedom, by 1865 African Americans had become the guardians of freedom.”