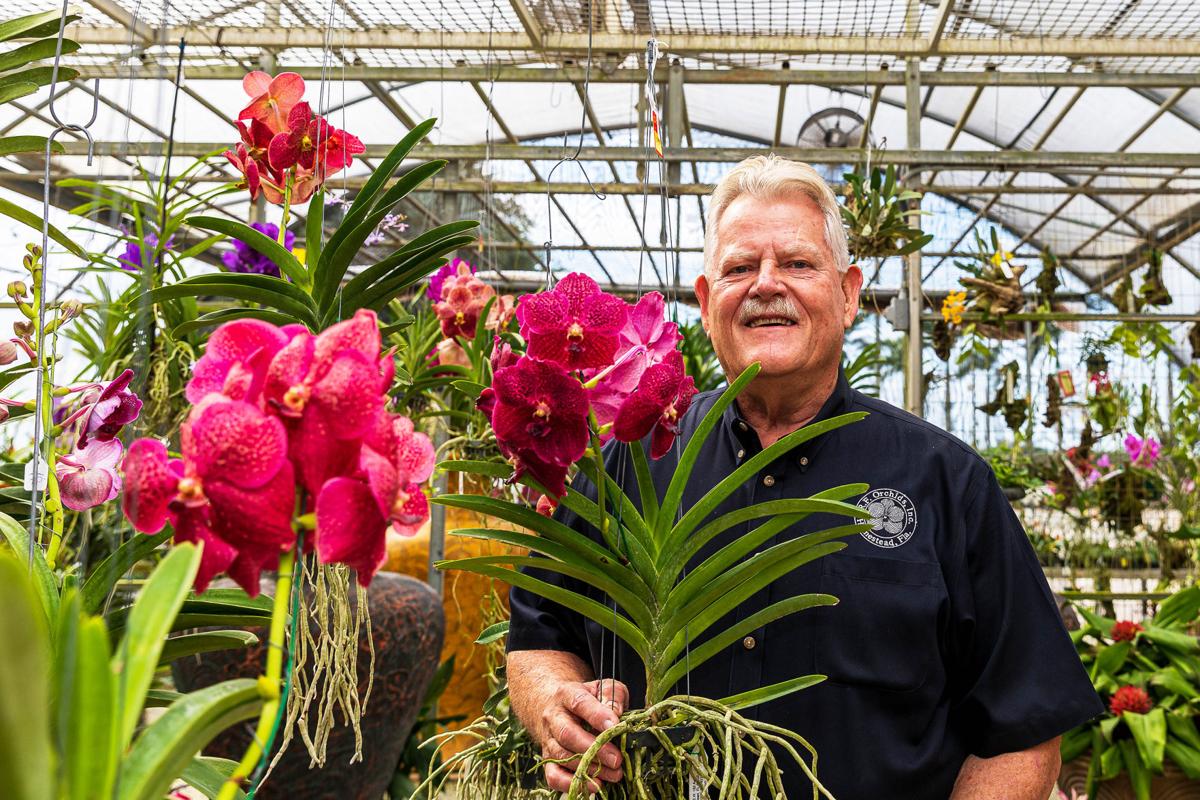 Robert Fuchs’ 50th anniversary of RF Orchids will be yet another busy year. 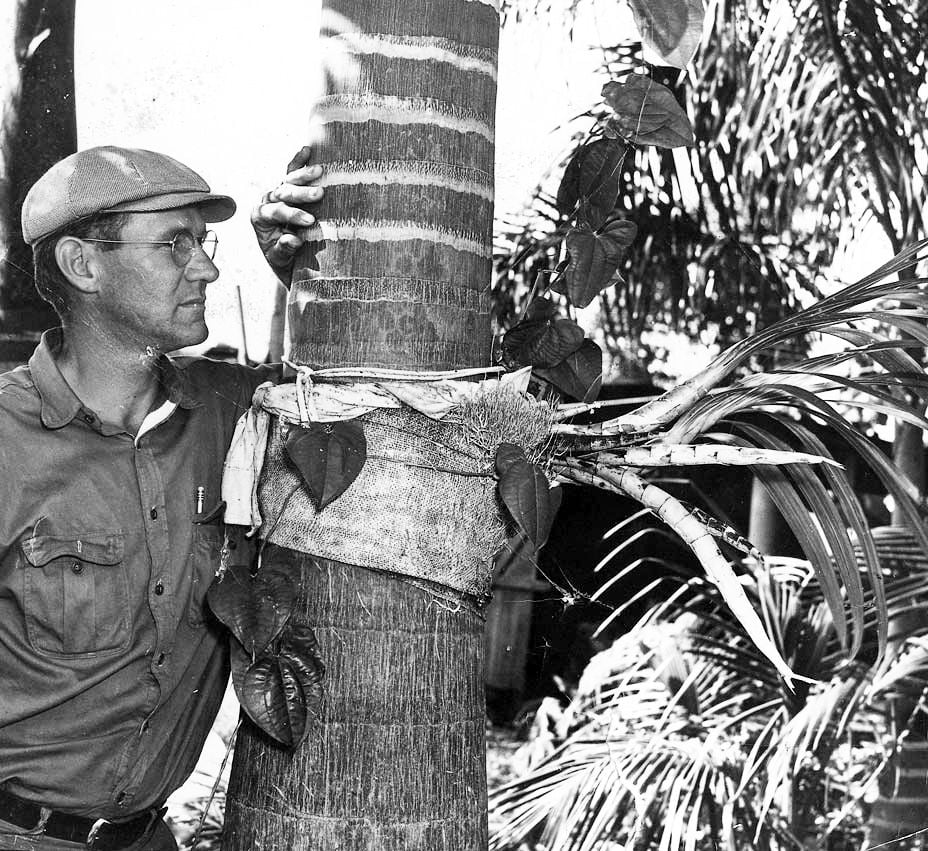 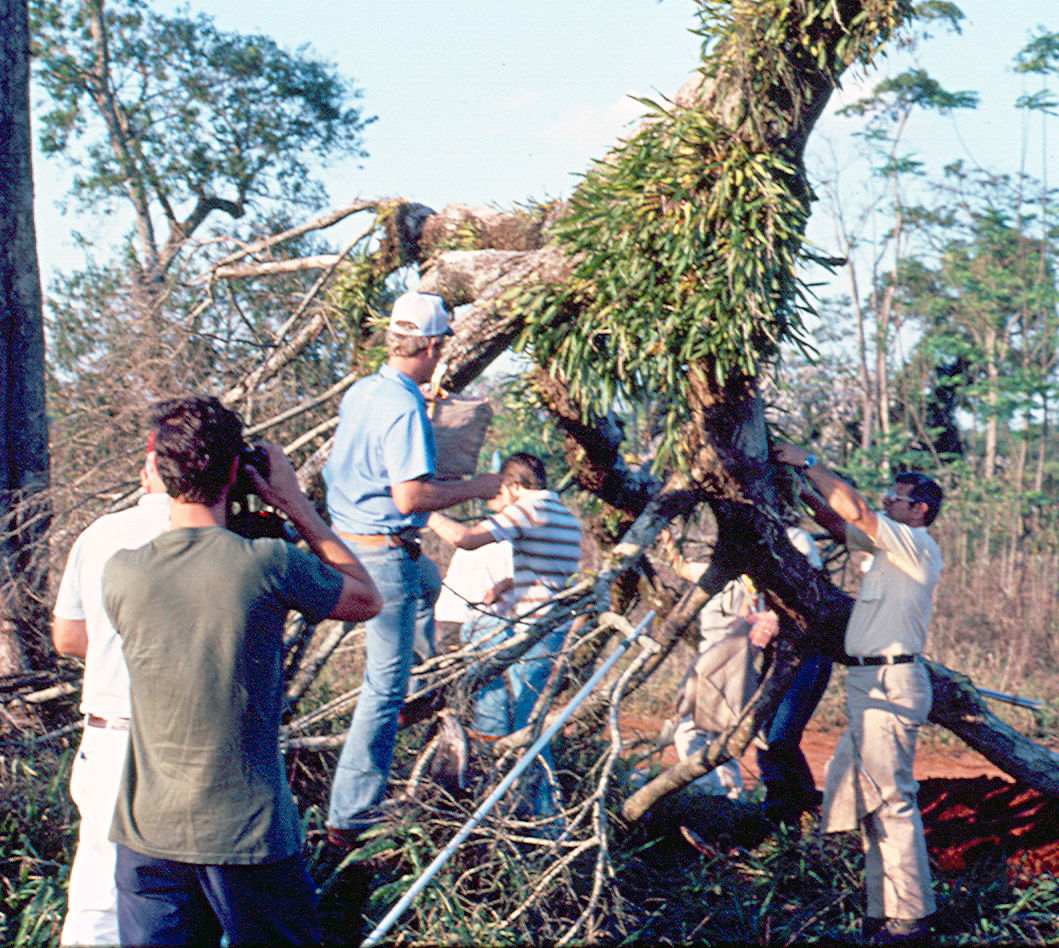 Robert Fuchs’ 50th anniversary of RF Orchids will be yet another busy year.

The beauty and variety found at internationally-acclaimed RF Orchids is an amazing story, built on a century of family history. The tale of family patriarch, Charles (Papa) Fuchs, settling in Homestead in 1912, purchasing 160 acres of undeveloped land, and opening a small bakery that eventually became the Holsum Bread Company can be saved for another time.

As Robert Fuchs explains in information he compiled for the American Orchid Society (AOS), it was Fred Fuchs, the middle son [Robert’s grandfather], who embraced the outdoors and especially the Everglades to explore familiar and exotic plants. Ten acres of land given to him and his wife Louise (Weesie) was cleared and re-planted with mostly native hardwood where the, “strange little plants growing attached to trees” [orchids], could thrive. Although more land was later acquired, the original ten acres is the location of today’s RF Orchids. The love for orchids continued in the next generation where Fred, Junior (Freddie) and his wife Barbara rebuilt a sturdy house after the 1945 Hurricane destroyed their previous one. Fuchs Orchids was the nursery they opened adjacent to their house in Naranja where he served as Postmaster. In becoming an acknowledged expert, trips to Central and South America were part of family life and son Robert was the one most committed to the beautiful flowers. A new dimension was added when his parents and Homestead couple Marlow and Millie Jacobson established Orchid Collectors, Inc.

As Robert Fuchs chronicled in his writings, “I was only 14 when I went on my first international collecting trip, accompanying my father and Marlow Jacobson, a Homestead neighbor, to the Dominican Republic in 1960. Our charter flight plan listed Santo Domingo as the port of entry, but the aircraft ran short of fuel and the pilot needed to land at Santiago instead. There was no answer from the Santiago tower, but, low on fuel, the pilot landed anyway. Armed soldiers met us on the runway, waving machine guns. My Dad’s peace offering, a bucket of Kentucky Fried Chicken, seemed to resolve this international incident without any shots being fired. After meeting with Dominican authorities, Dad, Marlow and I were allowed to collect orchids for three days. We remained in the Santiago area and collected many plants of Oncidium (now Tolumnia) henekenii.”  Those adventures though held both discovery and conservation. Large areas were being cleared in Nicaragua and the Fuchs’ would rescue orchids from trees before land-clearing crews destroyed them. It was 1967 when Robert found the specimen plant of Brassavola nodosa which later received the AOS’s highest award for flower quality, the First Class Certificate. The B. nodosa ‘Susan Fuchs’ FCC/AOS, was his first FCC. Fred, Senior’s passing, also in 1967, led to his wife offering Robert the shadehouses which his grandfather hadn’t been able to maintain as his health declined. Restoring them required a tremendous amount of hard work for the young man. His graduation from Florida State University in 1970 was another significant year. He entered Homestead Junior High as a teacher and in December opened RF Orchids. Summers and school breaks were for collecting trips; at times with his father or going on his own. For years, weekends were all he could devote to having the business open. Even with that, he increased his workload. “I took a part-time weekend job at the Snook Family Flower Farm, located at the north end of Green Thumb Nursery in South Miami, and began to build a clientele from Green Thumb’s South Miami and Coral Gables patrons.”

His efforts were rewarded, and he started an “Earn and Learn” program where he hired students to help with myriad tasks. Another milestone was, “In 1972, my brother Richard (“Dick”) built the structures that would become the business office and “sale house” area of the nursery, and Grandmother Weesie gave me the two acres of land where the nursery is located today.”

Despite decades of trips in the Southern Hemisphere, the East beckoned. Fuchs shared his grandfather’s love of vandas and like him, imported plants from Hawaii, and then from Thailand. While still being a teacher with everything else he was juggling, he hired student Michael Coronado in 1977, who was able to take over operations for the afternoons as well as weekends.

Six years later, a far-reaching trip was put together. “In 1983, Michael and I, John and Vivian German, Dorothy Bennett and Barbara Ansley, planned a trip around the world on the legendary Pan American Airlines flights 1 and 2. We left Miami for London, flew on to New Delhi and Bangkok. Then it was on to Manila and Honolulu before returning to the US.

In Bangkok, we spent time with several well-known Thai orchid growers, including Kasem Boonchoo, Thonglor Rakpaibulsombat of T Orchids, and Keeratikul Sophonsiri of Kultana orchids. The Thai growers were generous with their ideas about hybridizing, and it was quite a learning experience for both Mike and me. While in Hawaii, we visited a number of prominent growers including Ben Kodama, Richard Takafuji and Roy Fukumura, and spent some fascinating time sitting under Roy’s mango trees talking about vandas. I became good friends with these legendary Hawaiian orchid growers.”

They received major attention in 1984 at the 11th World Orchid Conference (WOC) held in Miami. In the highly competitive atmosphere, “R.F. Orchids’ display was honored to receive a Silver Medal, and the trophy for the best 300 square foot exhibit, as well as six Bronze Medals and three Silver Medals on individual plants. Additionally, three plants received Best-in-Class Trophies. Among those was the magnificent Vanda Deva ‘Robert’, which was voted Best Vanda as well as the 11WOC Grand Champion.” If any doubt about their abilities remained, those were ban ished when they won Best-in-Class 300 square foot display in the 1985 Miami International Orchid Show. Fuchs also retired from teaching that summer.

As with so many businesses, Hurricane Andrew devastated RF Orchids. Determined to rebuild, they overcame the damage to be operational by Christmas and have maintained their world-wide status within the orchid world. Fuchs’s advice to anyone starting out should come as no surprise. “We all have dreams and sometimes it’s difficult to make them happen. Work hard, dedicate yourself, and love what you do.” Of all the students he’s hired over the years, “I have always tried to instill that work ethic. They’ve all gone on to be successful; not all chose to stay in the orchid business.”

The student who most assuredly did stay is Michael Coronado, now Vice President of the company that has won more than 1,200 awards and prestigious designations. Only one example is Fuchs’ 2012 induction into the Florida Agricultural Hall of Fame; the first orchid grower to be so honored.

Fuchs’ primary goal this year as the President, American Orchid Society, is to emphasize conservation. They will work with Nature Conservancy, other organizations, and individuals to preserve land where the orchids he and his family have dedicated so much to can continue to flourish.