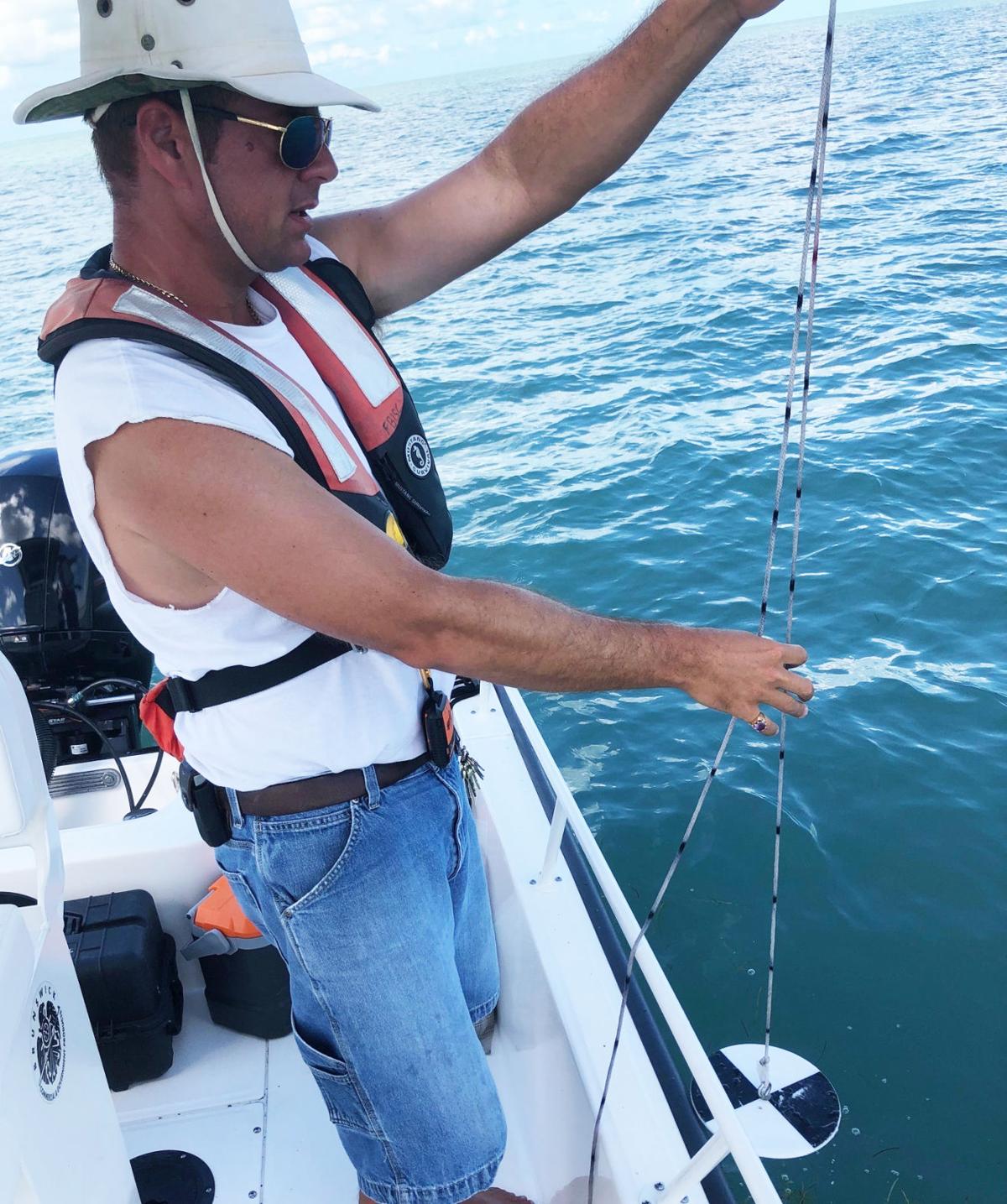 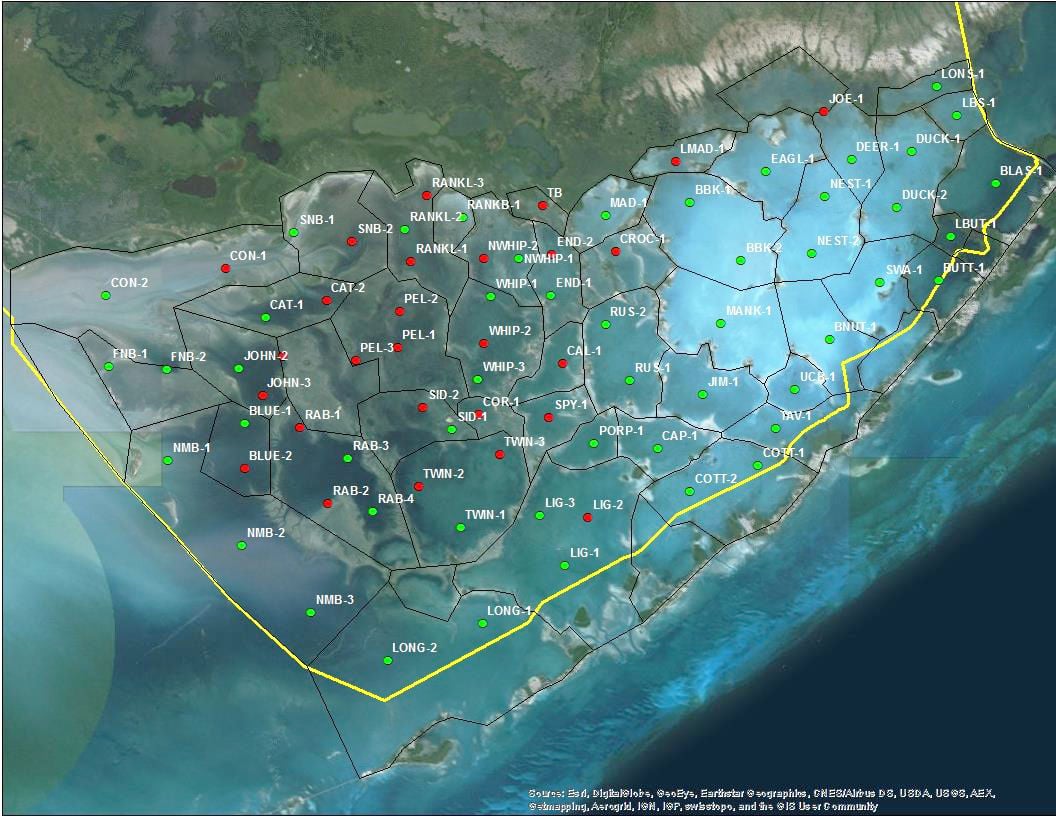 Each dot on this map represents a different water quality sampling site in Florida Bay. Physical measures and chlorophyll-a are analyzed at all sites. Nutrients such as phosphorus, nitrogen, carbon, and silicon are also analyzed at the red sites.

Each dot on this map represents a different water quality sampling site in Florida Bay. Physical measures and chlorophyll-a are analyzed at all sites. Nutrients such as phosphorus, nitrogen, carbon, and silicon are also analyzed at the red sites.

Everglades National Park biologist Zach Fratto has many people’s dream job, and he knows it. Fratto’s work takes him out on Florida Bay often. I was lucky enough to tag along recently.

Our goal that day was to sample water quality in 14 sites. We covered more than 100 miles, going as far south as Long Key basin and as far west as First National Bank.

Captain Key basin was our first stop. We filled two brown, plastic bottles with water to test back in the lab. We got a low reading using the turbidity meter, not surprising because the water was pretty clear. Fratto used a water quality sonde to take other measurements such as dissolved oxygen, salinity, acidity (pH) and temperature. This data would later be logged and compared to measures from previous times in the same area.

And then we were off to our next stop for more water quality sampling.

Fratto collects this data every other month. Why? Seagrass die-offs that started in the mid-1980s prompted the park and others to start monitoring Florida Bay.

In 1987, fishing guides reported seeing a widespread die-off of seagrasses in Florida Bay. About 1990, almost 10,000 acres of seagrass were lost and an additional 55,000 acres affected. No one had ever seen anything like it.

The fishing community took notice because there were a lot less fish, reduced water clarity and algal blooms.

Seagrasses form the foundation of Florida Bay, and their death caused the bay to become sick. Many people say that this was the final straw that prompted real conversations about how we needed to restore the Everglades.

The rate of seagrass die-off slowed substantially by 1990, and the seagrass

eventually recovered and grew back. While small areas of seagrass die-off still occur, there were no significant die-offs until 2015. That year, 40,000 acres of turtle grass—one of three main seagrass species in central Florida Bay—died. It is still recovering.

What causes these seagrass die-offs? Scientists now know that these events are caused by a cascade of stressors that usually starts with high salinity and high temperatures, and ends with death by poisonous hydrogen sulfide.

“High salinity can occur when we’re in a drought or when it’s so hot that evaporation exceeds rainfall,” said Christopher Kavanagh, marine ecologist for Everglades and Dry Tortugas National Parks. “The high salinity and high temperatures can work together to inhibit photosynthesis and decrease the water’s capacity to hold oxygen. Under these anoxic conditions, bacteria in the sediment produce hydrogen sulfide, which can enter into the roots of the seagrass and rapidly kill the plant.”

“Additional clean freshwater, at the right time, into Florida Bay can help prevent future seagrass die-offs,” Fratto said. “That’s where Everglades Restoration projects, that deliver more water from Lake Okeechobee after it has been cleaned, come in. We need that water, especially during droughts and during the dry season.”

Back on the boat, we finished sampling at our last location at around 1 p.m., plenty of time to get back to Key Largo to complete lab work.

The lab results will provide a snapshot of the overall health of the bay. Fratto and I filtered the water samples we collected for later nutrient and chlorophyll-a analysis. Measuring chlorophyll-a is particularly important because high concentrations are a signature of algal blooms, which can stress live seagrass by blocking out light.

Lab work finished, we started unpacking our materials. I pulled out a plastic water bottle. I had forgotten about it. We saw it floating in the water on our way to one of stops during the day.

It was a good reminder and a good way to end the day. All of us can do our part to help Florida Bay, whether that’s measuring water quality or doing out part to keep it clean.

For help navigating the coastal waters of South Florida:

This course becomes mandatory for all boat operators in park waters starting August 1, 2019.

We want to hear from you! Email the author - Antonia_florio@nps.gov

if you have any feedback.