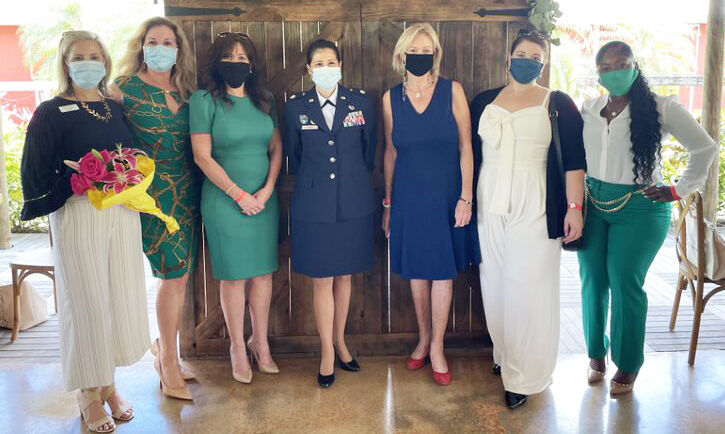 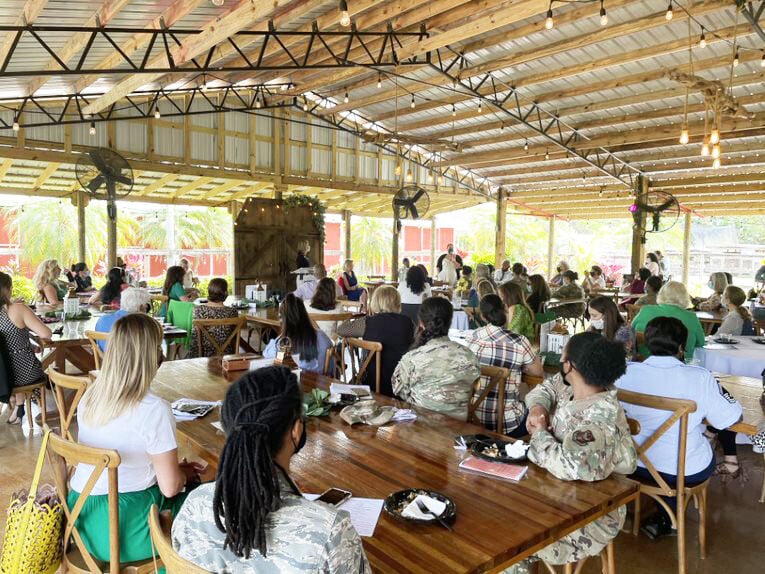 Open air dining, masks, and other safety measures at the Spur of the Moment Ranch were in place for the well-attended Ladies of Legacy Leadership Luncheon.

Open air dining, masks, and other safety measures at the Spur of the Moment Ranch were in place for the well-attended Ladies of Legacy Leadership Luncheon.

As Women’s History Month draws toward a close, the South Dade Chamber of Commerce (SDCC) held their second annual Ladies of Legacy Leadership Luncheon, Wednesday, March 17, 2021. The event was partnered by the National Association of Women in Construction, Miami Chapter (NAWIC).

“Ladies of Legacy” is a celebration of leaders who have made a difference in their communities, while building their careers and nurturing their families,” was one passage from the program. In the cross-section of government and business leaders/ members, special recognition was paid to the group of military service women and military spouses present for their dedication and sacrifices they routinely make.

During her opening remarks, Lucia Soria, President of Ram-Tech Construction, Director in NAWIC, and Chair-Elect of SDCC, explained how NAWIC was established to give women a voice in a predominantly male industry. U.S. Congresswoman Maria Elvira Salazar had been called away to join other officials concerned with issues at the southern border. Her representative, Michelle Gil, echoed her appreciation for the enthusiasm of the attendees.

The keynote speaker, Lieutenant Colonel Duilia Mora Turner, who is Chief of the Women, Peace and Security Program at U.S. Southern Command (USSOUTHCOM), provided insight and inspiration about her somewhat circuitous path.

To come from a time she worked at a McDonalds, struggling to learn English after having been away from the United States during her formative years, to serving in the Air Force for more than two decades would have been a measure of success by any definition. To have her career include being part of the Space Program at NASA and later overseeing weather operations for Air Force One as well as deploying to Bosnia and Afghanistan for different operations, was testament to her ability to take on increasing responsibilities. In her current assignment at USSOUTHCOM she serves not only as a role model to younger women within the Command, but also interacts with all the militaries of Central and South America and the Caribbean Basin.

After the standing ovation, Kerry Black, CEO of SDCC, invited former Florida State Representative Holly Raschein, to join the other panelists for the afternoon’s final segment. Sherry Thompson Giordano, Executive Director for Pace Miami, Monica Skoko Rodriguez, Executive Director for the MDC Commissioner for Women, and Tamika Smith, Transaction Coordinator for AHS Residential, spoke briefly of their respective organizations and Black presented one question to each.

The queries dealt with topics such as, “When did you first realize you were ‘The Boss Lady’?”

Responses reiterated the theme of women who might not always initially feel as confident as they projected yet took risks and succeeded in their new positions. A related theme was mentoring other women across a range of ages.

Another passage from the program summed up the essence of the luncheon. “The world needs more women to stand up and empower others to realize their potential.”