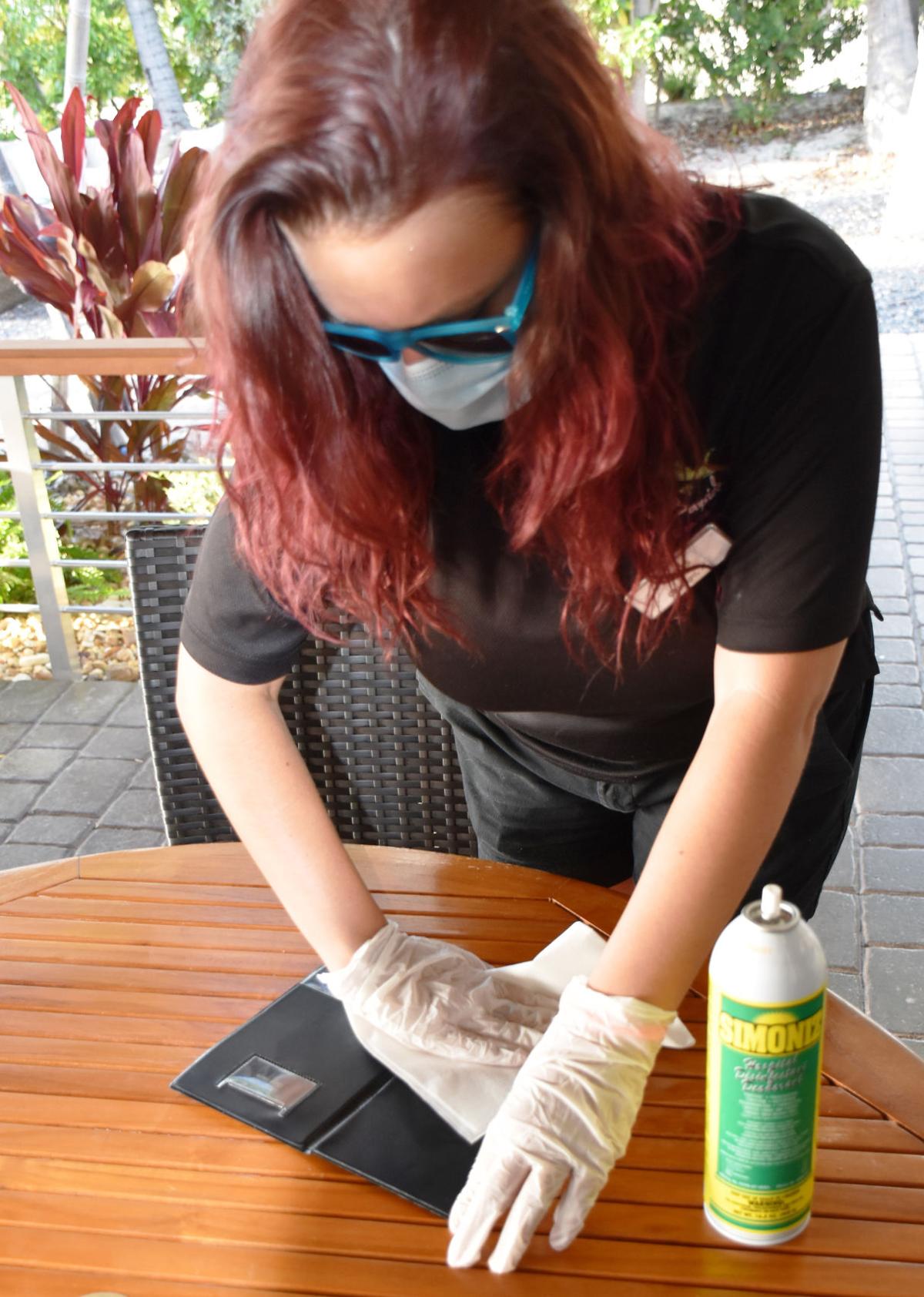 Staff at Snook’s sanitize the restaurant’s check holders after each use.

Staff at Snook’s sanitize the restaurant’s check holders after each use.

When hurricanes roar through with whatever level of destruction they leave in their wake, there is an assessment of damage, and responders flow in. Insurance companies are called, repairs set into motion, and general timelines for recovery calculated. Every restaurant that has been through at least one such storm knows how to react.

The rapidity of restrictions imposed due to the COVID-19 crisis came with virtually no warning, however, and thrust restaurants as well as other businesses into unknown challenges. Buildings are still intact, yet the mandate to close dining rooms has had varying degrees of adverse economic impact; an impact exacerbated by the loss of tourism.

With the Capri’s history of more than sixty years as a family restaurant, Jimmy Accursio’s longtime customers who have been ordering delivery and take-out instead, agree they’d never experienced anything like this. In constantly adjusting to new guidelines, Accursio has prepared the King Richard room to operate under anticipated restrictions if Miami-Dade County gives the go-ahead the week of May 18, 2020.

“We’re hearing we’ll only be allowed 25% capacity, but we don’t know exactly what that means,” he said. “If it’s based on occupancy license, we’ll be able to have about 80 diners at a time. We’ll continue with carry-out and delivery and have specials.”

He pointed out the economic reality.

“Businesses aren’t set up to operate at 25% capacity, but this is a first step back.”

In fact, a number of his customers have already made reservations for opening day and are simply waiting to be told the date.

The award-winning Chef’s on the Run though has too small a footprint to consider the option. Take-out and delivery until all dine-in restrictions are lifted is their best approach.

Restaurants in Key Largo were permitted to re-open dine-in under restrictions beginning May 8, 2020, even though the Keys are still blocked to outside

visitors. When Snooks Bayside was renovated several years ago after a fire, the decision was to convert to all outdoor dining. No one knew at the time that would serve them well under these circumstances. Julius Valentine, general manager, explained they didn’t have to adjust tables much to accommodate social distancing. There are no seats at the bar, but with a large outdoor space and loyal customers, they have been able to bring back their entire staff.

“We have boats docking as well as our other customers,” he said. For staff who were temporarily let go, if they are not comfortable working in the required masks and gloves, they can wait until later to return to their jobs.

The Big Chill, also with a large outdoor area, had the advantage of the well-established Enrico’s Pizza which helped with carry-out and delivery business.

Michael Weisberg, Assistant Manager, has been on-site since they opened originally.

“We removed seating from our larger tables to limit to no more than eight,” he said. “We have sanitizer stations set up every ten tables or so and we bring wipes when we give out the menus.” The first week back has been good although like everyone, there can be no genuine recovery without tourists and other visitors. We had 89 employees, dropped to 7, and have been able to come up to 15,” Weisberg said.

Their policy is also to re-hire previous staff as soon as they are in a position to do so.

The iconic Mrs. Mac’s tried take-out the first week-and-a-half after shut-down, but it wasn’t practical for them. They just re-opened Monday, May 11, 2020. Nick Rodriguez, manager, explained Mrs. Mac II – in the median – is the location that allows for required social distancing.

“We’re sanitizing everything, taking the temperatures of employees each day; even the delivery people before we let them in.”

They are still taking the traditional Sunday off, but are open the other six days.

Keys Bites, with a smaller space, does have some outdoor tables that are set adequately apart.

“We have been doing take-out and delivery,” the manager Adela Munoz said. “We have local customers who have been supporting us and now we can re-hire a few people. We’d like to get back to normal.”

The restaurants are generally closing an hour earlier than before the  shutdown.