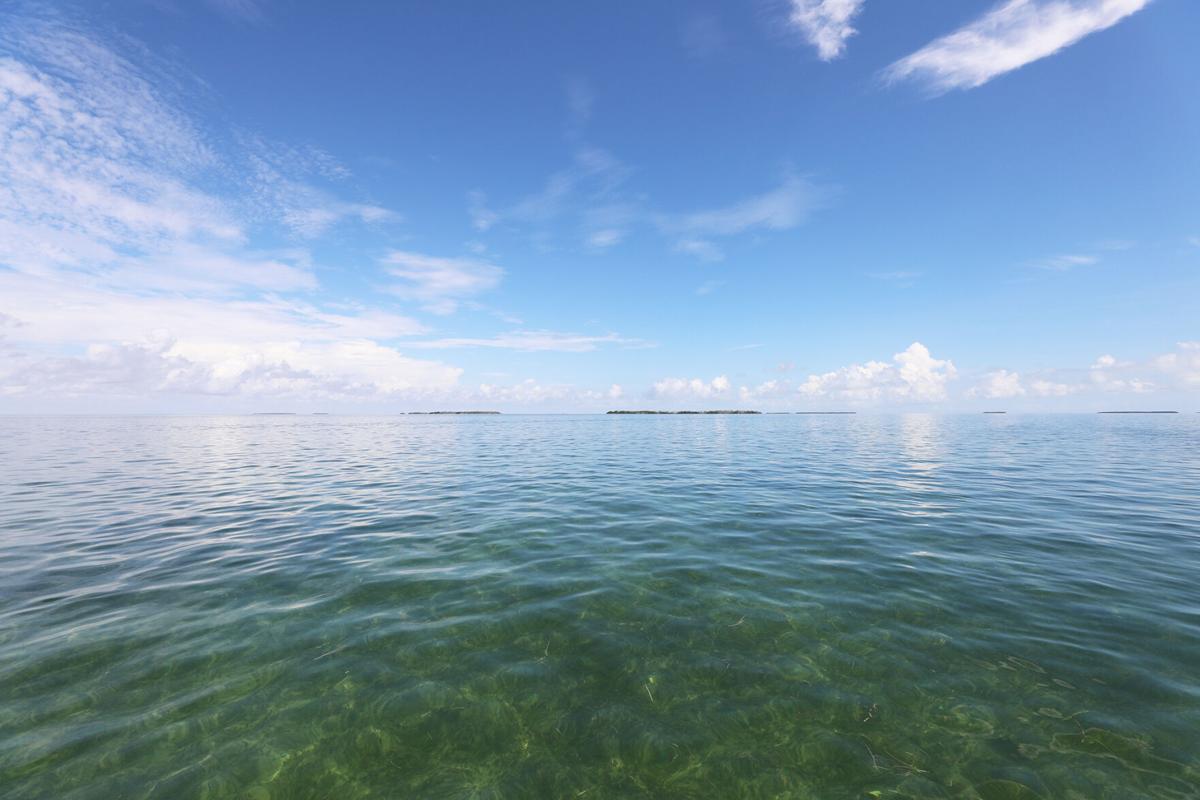 Clear water was the norm in the historic Florida Bay and is necessary for healthy seagrass, which  is the foundation of its ecosystem. Without enough freshwater raining onto or flowing into the bay, salinity levels rise eventually leading to hypersalinity events, algal blooms and cloudy water. 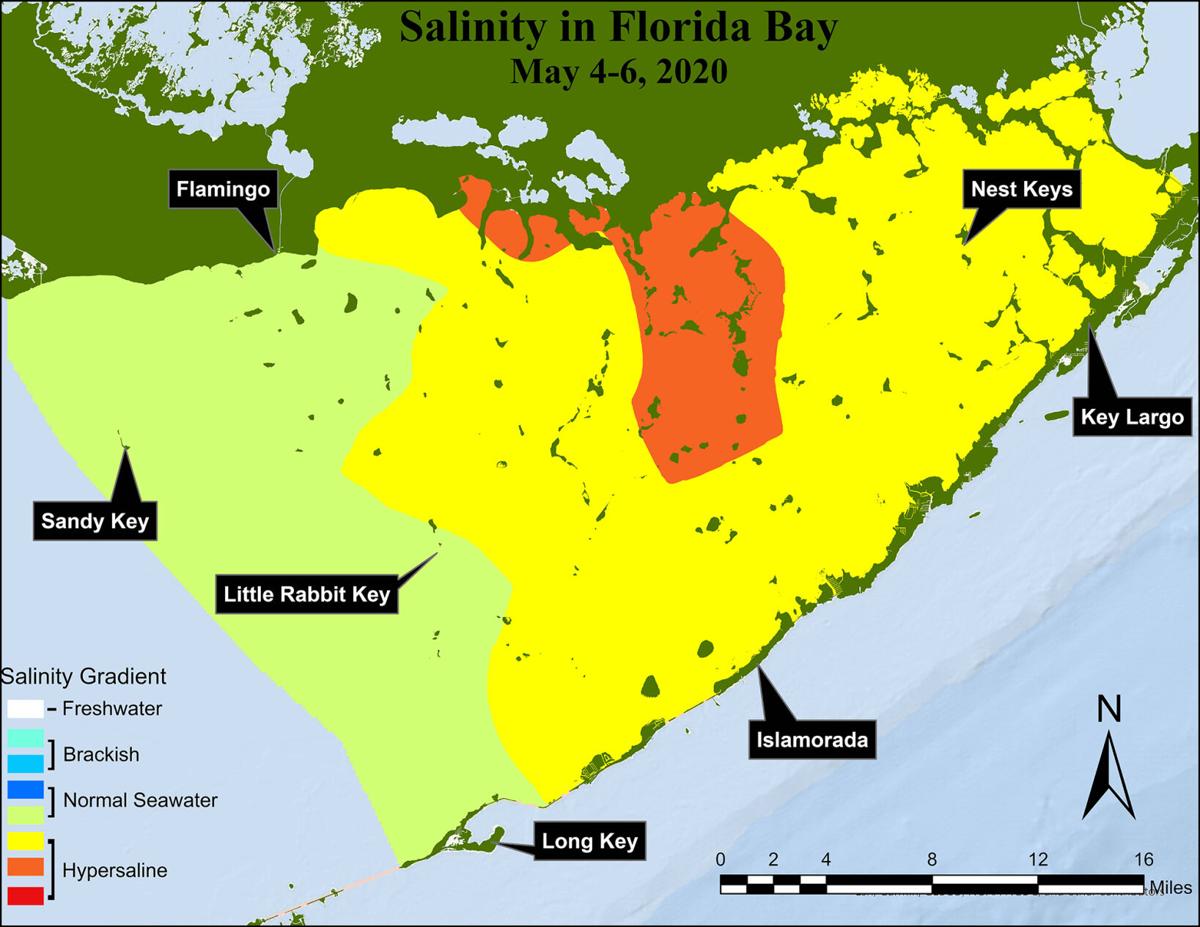 More than half of Florida Bay was experiencing hypersalinity, or salinity levels above normal seawater, at the beginning of the 2020 wet season. 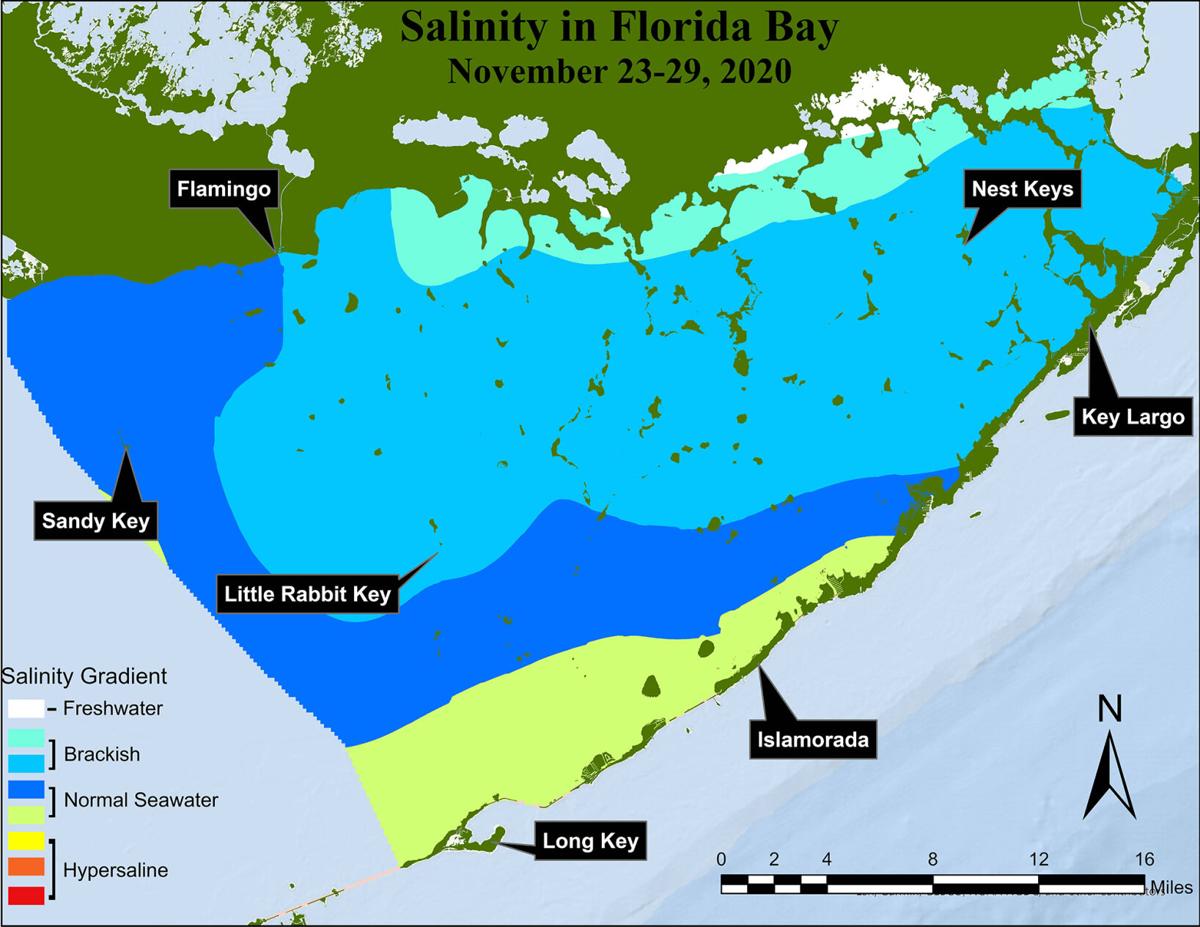 A salinity gradient that matched our best understanding of the one that existed in the historic Florida Bay formed following the above average rain South Florida received in the last four months of 2020. Beginning in the northeast, the salinity gradually increased from freshwater to normal seawater as you move farther away from the northeast coast. 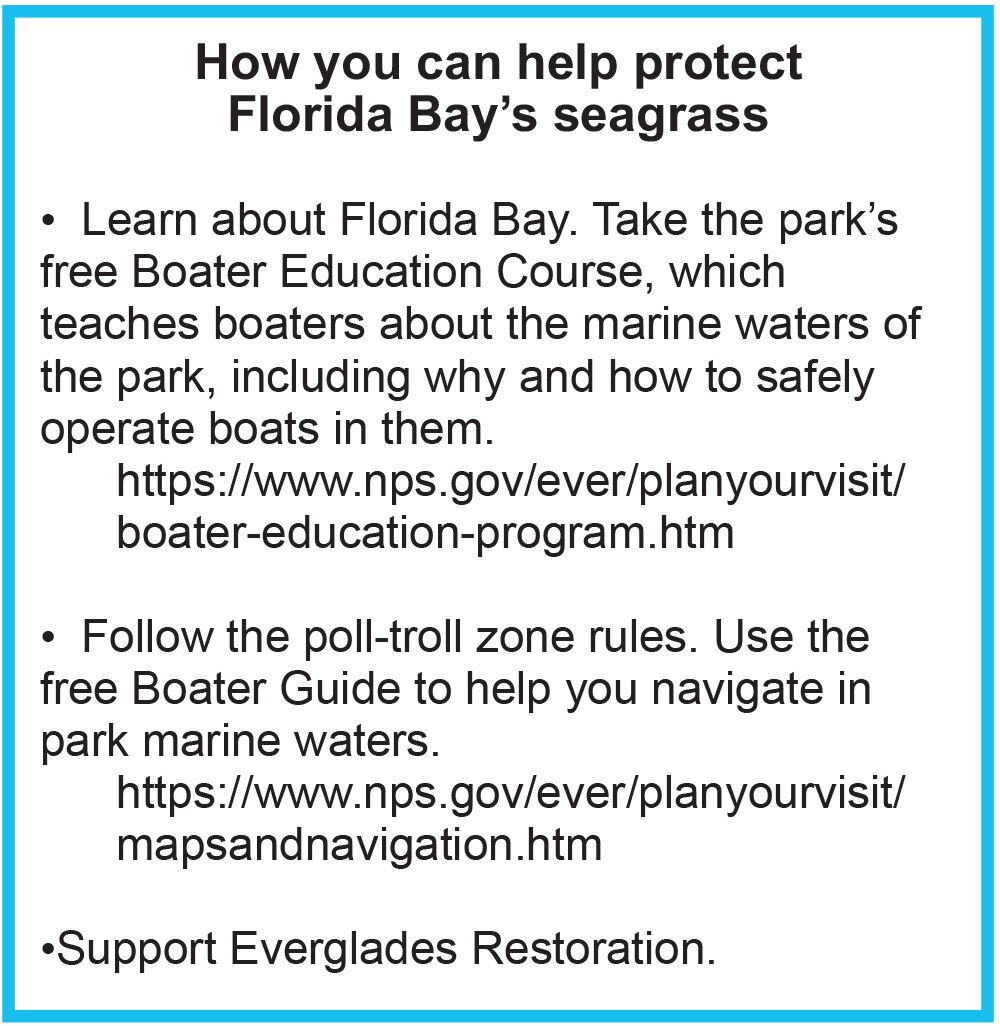 This is the third article in a three-part series on the recent historic water levels.

The Everglades is a vast and unique wetland. Perhaps the most important part of that statement is the first part of the word wetland—wet. Without water, the Everglades would cease to exist.

That is why we describe water as the lifeblood of the Everglades.

In the last four months of 2020, the Everglades received a massive transfusion of that lifeblood from the above-average rainfall during that period.

The resulting high-water levels, though challenging to many farms and neighborhoods outside of Everglades National Park, have been a boon for freshwater fish and water-loving birds.

But it is not just the River of Grass that depends on a steady supply of freshwater to retain its essence or that benefited from the recent increase in water flow.

After traveling sometimes hundreds of miles, the freshwater of the Everglades eventually meets the saltwater of the ocean. Long ago, at this meeting of fresh and salt, estuaries formed.

Estuaries have dynamic environments that make them some of the most productive places on Earth. They burst with life. Naturally, the abundance of resources, such as prey, attracts even more life, including humans.

As a recent college graduate with a shiny new degree in Marine Biology, I was certainly drawn to the enigmatic estuaries of the Everglades when I first arrived in South Florida.

Thousands of years ago, though, it wasn’t beauty or mystery that drew people to the edge of the Everglades. It was food.

Today, Everglades and Biscayne National Parks protect much of the Everglades-fed estuaries. And their abundant marine life still lures people here to fish and view wildlife.

But the essence of these estuaries also depends on the freshwater that historically flowed slowly through the Everglades in one great sheet of water—something that was effectively shut off when we reengineered the Everglades to suit our needs beginning in the 19th Century.

Just like the freshwater Everglades, the estuaries deteriorated from the loss of that freshwater input, probably none more famously than Florida Bay.

For years, the Florida Bay estuary has suffered from regular hypersalinity events—or periods when salinity rises above normal sea water. The event in 2015 produced salinities twice that of normal sea water.

For perspective, it is normal for salinities in the bay to fluctuate with the seasons. During the wet season, rain and freshwater flowing into the bay outstrip normal evaporation and lower salinity. During the dry season and droughts, the lack of rain or freshwater flow and continued evaporation increases salinity. But even with this seasonal fluctuation, salinities should rarely rise to those above normal sea water.

While the freshwater Everglades is the “River of Grass,” Florida Bay is a meadow of grass— seagrass, that is. Incredibly, the seagrass meadows of Florida Bay make up the largest continuous seagrass bed on Earth.

Along with the mangrove forests lining the coast, these seagrass meadows are the reason the Florida Bay estuary can support such a great diversity and quantity of life. Without seagrass, Florida Bay would be muddy-bottomed and would not support the multitude of life it is known for.

There are many factors that contribute to these die-offs, but they all have one thing in common—hypersalinity. It can be cured though.

In fact, the recent increased freshwater flow into and rainfall directly on Florida Bay ended a hypersalinity event that parts of Florida Bay were experiencing earlier in 2020.

And that wasn’t the only change to the bay.

For Florida Bay diehards like myself, what was even more encouraging was how salinity changed in the bay. A new salinity gradient formed with freshwater starting at the coast and gradually increasing to the salinity of normal seawater farther away from the coastline.

But this wasn’t just any salinity gradient. It matched our best understanding of the gradient that existed in the bay before people changed the water flow and patterns of the Everglades.

What does that mean for the health of Florida Bay? A hopeful sign for the future.

Right now, we are getting reports that fishing in Florida Bay is outstanding, particularly for two important sportfish species, redfish and snook. This is a sign that the ecosystem can bounce back after so many tough years without sufficient freshwater flow. Perhaps even more quickly than we dared to hope.

Of course, we can’t rely on an unpredictable Mother Nature to regularly bless us with the conditions that led to what we’re seeing in the bay right now. Nor should we desire that. And salinity isn’t the only issue affecting the health of Florida Bay—though perhaps most issues are tied to out-of-balance salinity.

For instance, Florida Bay was once described as entirely gin-clear, but that distinction can only be given to a few areas of the bay today.

Decaying seagrass released nutrients into the water and exposed sediment to be stirred up by the waves. This led to algal blooms and silty, cloudy water.

Both algal blooms and cloudy water block sunlight from reaching the seafloor, which seagrass needs as much as any plant that grows above the waves. Without sunlight, the seagrass can’t regrow.

Algal blooms and cloudy water caused by seagrass die-offs can be pushed around Florida Bay by winds, and when this happens, a self-perpetuating cycle can form. The murky water blocks the sun when it is pushed into healthy seagrass beds; and if the water doesn’t clear fast enough, it can cause them to die. Then the whole process begins anew.

If we are to restore Florida Bay to the way it was before we reengineered the Everglades, we must protect its seagrass. The best hopes we have for that are to physically protect seagrass—the aim of the park’s Boater Education Course—and to restore freshwater flow into the Everglades-fed estuaries.

Fortunately, Everglades Restoration will do just that. Projects like the Central Everglades Planning Project and Comprehensive Everglades Restoration Plan will increase water levels in the park, specifically in Shark River Slough. This will help maintain a steady flow of freshwater into Central and Western Florida Bay while the smaller-scale C-111 Spreader Project increases freshwater flows into northeastern Florida Bay.

And finally, the recently implemented Combined Operational Plan will increase water flow into the park during the dry season, a time when the park often received little freshwater, if any. The results of this additional freshwater alone will help prevent hypersalinity events in the future.

As more and more restoration projects move closer to completion, we should begin to see Florida Bay and the other Everglades-fed estuaries stabilizing and hopefully returning to their former glory.

For now, we are lucky to witness a glimpse of the Everglades and its estuaries as they once were.