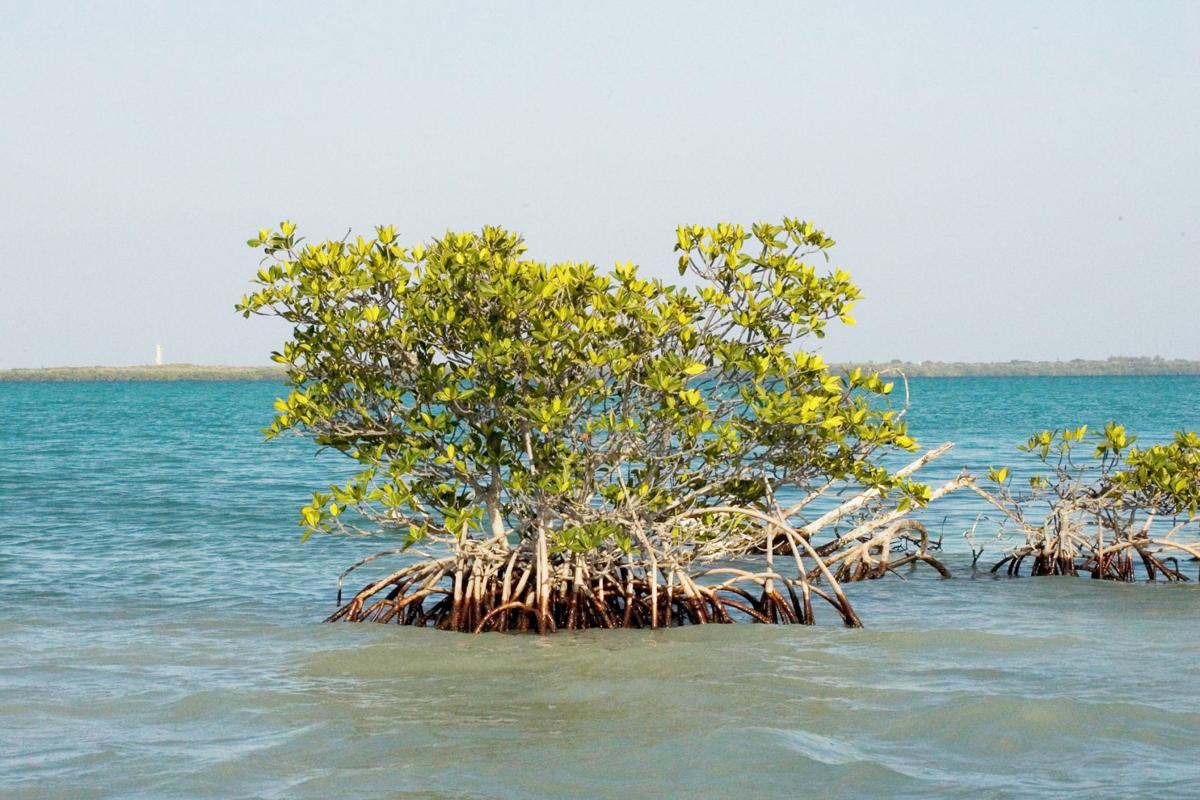 They thrive in the estuarine environment where freshwater and saltwater mix. 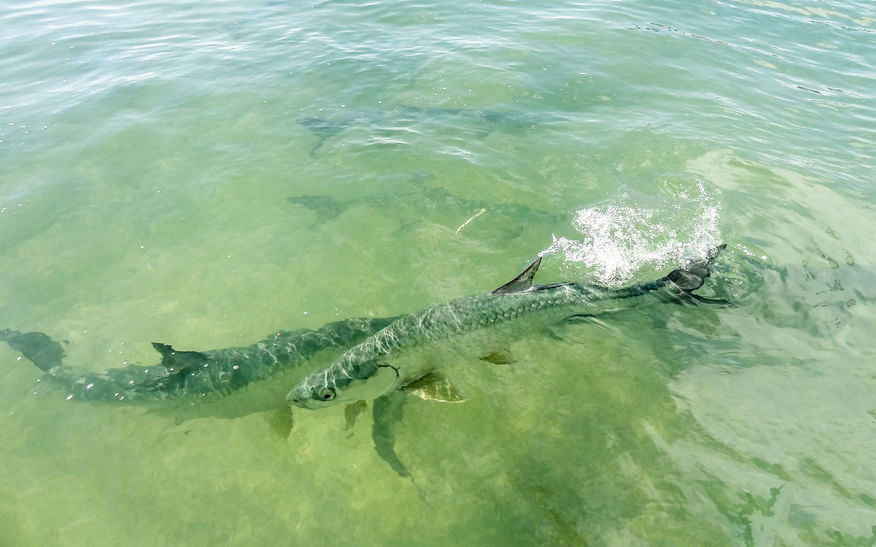 This tarpon is an example of an economically important sportfish found

in Florida Bay. Their young grow faster and are thus better able to escape 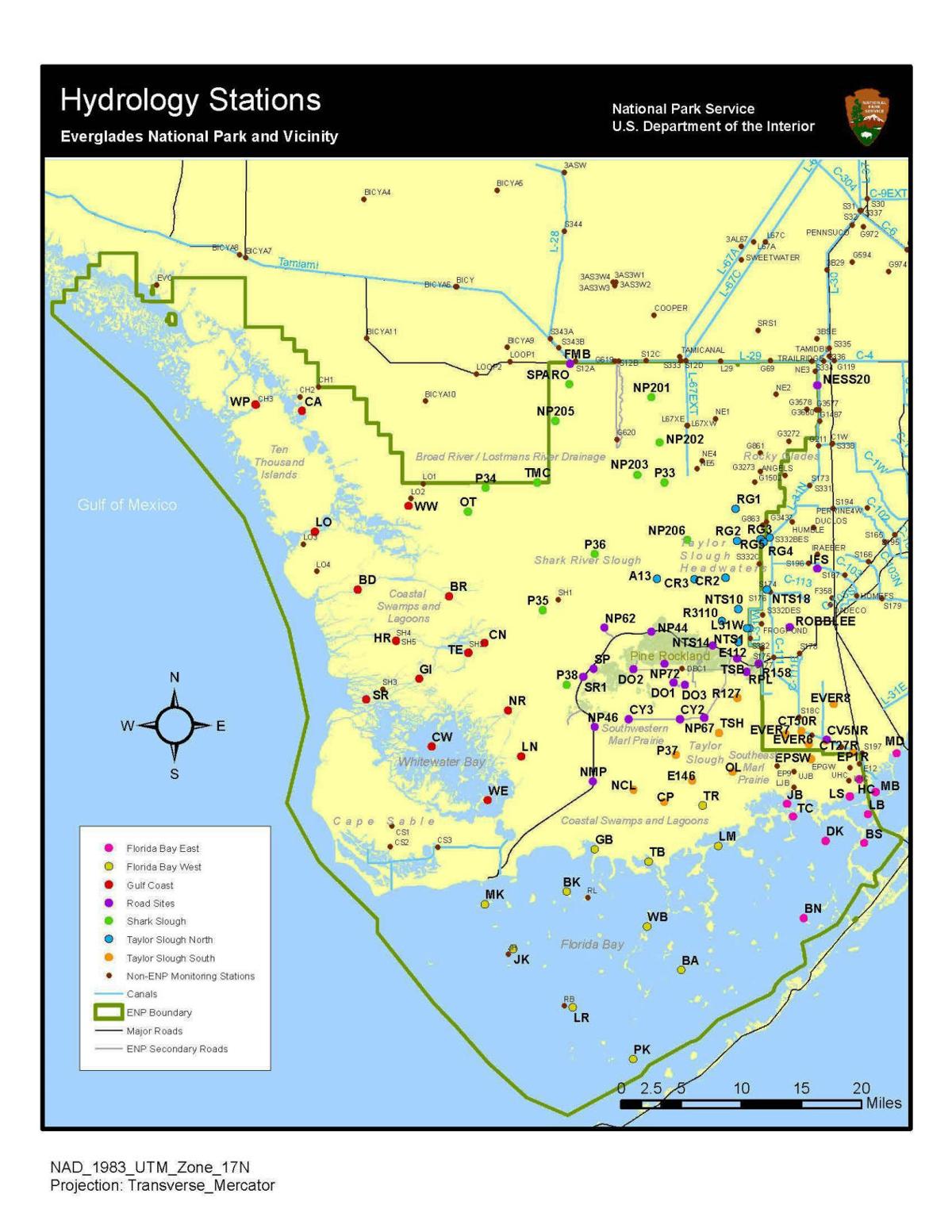 There are water monitoring stations located throughout the park. The information collected at these stations provides us with data like salt concentrations, temperature, and water level. Note that Florida Bay is located at the southern end of the park.

They thrive in the estuarine environment where freshwater and saltwater mix.

This tarpon is an example of an economically important sportfish found

in Florida Bay. Their young grow faster and are thus better able to escape

There are water monitoring stations located throughout the park. The information collected at these stations provides us with data like salt concentrations, temperature, and water level. Note that Florida Bay is located at the southern end of the park.

Did you know that part of Florida Bay is located within the boundaries of Everglades National Park and that it comprises about one-third of the park?

I didn’t, that is, until I started working here. This revelation started my now almost two-year mission to understand everything about Florida Bay.

As I learned, including Florida Bay as part of the park makes complete sense, not just because the Everglades shares a border with it, but because the park and bay belong to the same vast ecosystem.

Florida Bay is an estuary, an area where freshwater meets saltwater. Historically, there was a constant influx of saltwater from the Atlantic Ocean and the Gulf of Mexico into the bay as well as consistent freshwater flow from the Everglades to the north.

These sources of fresh and saltwater mix to create the salt concentrations needed by the animals and plants of the bay to survive.

Like many other estuaries, Florida Bay is a special place for biodiversity. There are many plants and animals, such as mangroves, seagrass and manatees that are dependent on the bay for survival.

These same organisms become stressed when there is too much salt. This is what happened in 2015, when the combination of too much salt in the water and high temperatures started a series of events that led to seagrass dying over large areas in the middle of the bay.

Juvenile sportfish, such as tarpon and snook, are also dependent on having the right salt concentrations in Florida Bay. The bay provides a safe place and acts as a nursery for these fish when they are young. They hang out under mangrove roots to hide from predators. They can put most of their energy into growing, which will eventually make them too large for predators to eat.

These sportfish tend to grow slower when salt concentrations in the bay are too high because they are using some of their energy to regulate their salt intake. Because it takes them longer to grow larger, they are more likely to be eaten by predators.

For all of these reasons and more, there has long been an understanding that Florida Bay is a place worthy of and in need of protection. This is why it was always included in the park’s boundaries since it was established in 1947.

And, since that time, park scientists have been monitoring the waters of the bay. In the 1980s, this effort was formalized into a water monitoring program.

Since then, data have been collected at water monitoring stations located throughout the park. The data collection allows us to calculate salinity, or the salt concentration in the water, through the use of a measure called conductivity.

“Conductivity is a way of approximating how much salt is in the water, and it is key to knowing if salt is getting in places it wasn’t historically,” said Christa Walker, a hydrologic technician at Everglades National Park.

Walker and the team of park hydrologists spend much of their time traveling to water monitoring stations in both the park’s fresh and marine waters, as well as managing the large amount of data that results from their efforts.

The data they collect show us that much of Florida Bay is hypersaline, meaning that there is more salt in the water than the amount we would have expected to find before human activities changed freshwater flow through the Everglades.

The key to correcting this imbalance is getting more clean freshwater from Lake Okeechobee into Florida Bay. That’s where Everglades Restoration, an effort to redistribute water flow to more closely match historic conditions, comes in.

“Salinity is the ultimate indicator of the condition of the ecosystem,” said Erik Stabenau, the Oceanographer and Coastal Ocean Modeler for Everglades National Park. “Everglades Restoration projects, specifically those focused on streamlining mechanisms to bring water south into the Everglades ecosystem, will help bring back salinity levels that match what was historically present in Florida Bay.”

Stabenau is hopeful that Everglades Restoration projects can help get salt levels right in Florida Bay.

For resources on boating in Florida Bay, including the new Boater Education course, www.nps.gov/ever/planyourvisit/boating.htm

As of August 1, 2019, all marine boat operators are required to have a certificate of completion for the Boater Education course when boating in the park.