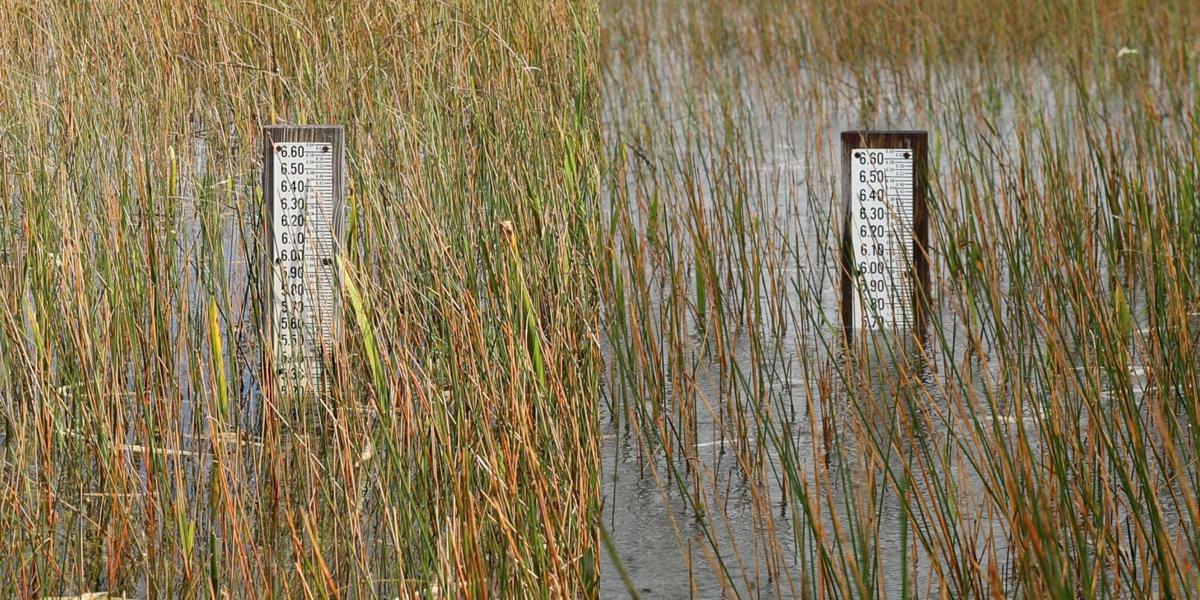 A staff gauge shows water level in relation to something else.

This one just north of Main Park Road, in the heart of Taylor Slough, read 5.18 feet above sea level on October 10, 2020—the date of my original foray into the flooded park. Just 14 days later, it read 5.66 feet. Almost half a foot increase may seem tiny, but the pictures show just how much less “grass” emerges from the River of Grass with that huge-for-the-Everglades

Monthly rainfall in the South Florida Water Management District from April to December of 2020. When the solid line rises above the dashed line, the District received more rainfall than average and vice-versa. The rainy end to the 2020 wet season and very rainy beginning of the 2020 dry season are plain to see. The District covers the entire Everglades from its source at the Kissimmee River to its conclusion in Florida Bay and the Florida Keys. Rainfall data is from the South Florida Water Management District’s 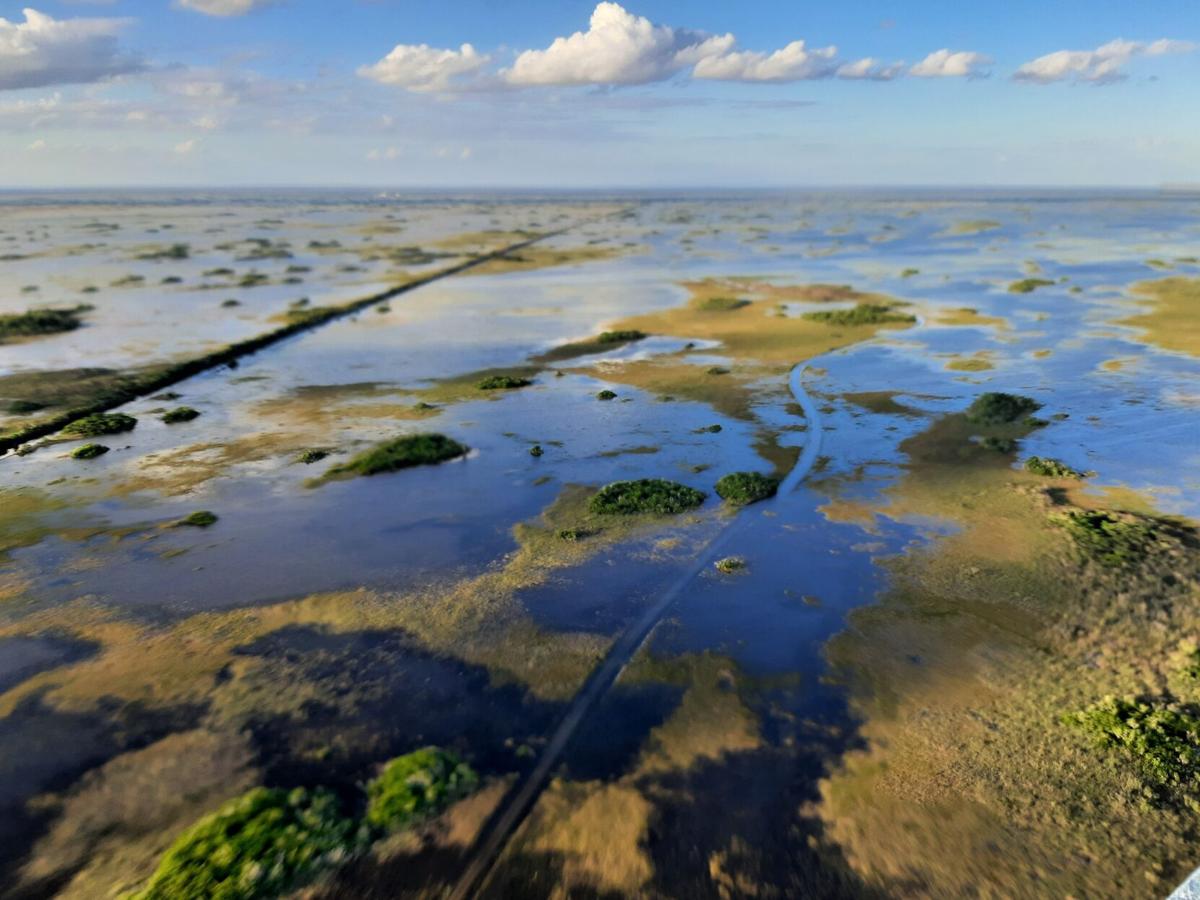 Shark Valley Loop Road had to be closed because of the extremely high water levels. This picture was taken Nov. 24, 2020. Shark Valley reopened recently after water levels decreased. 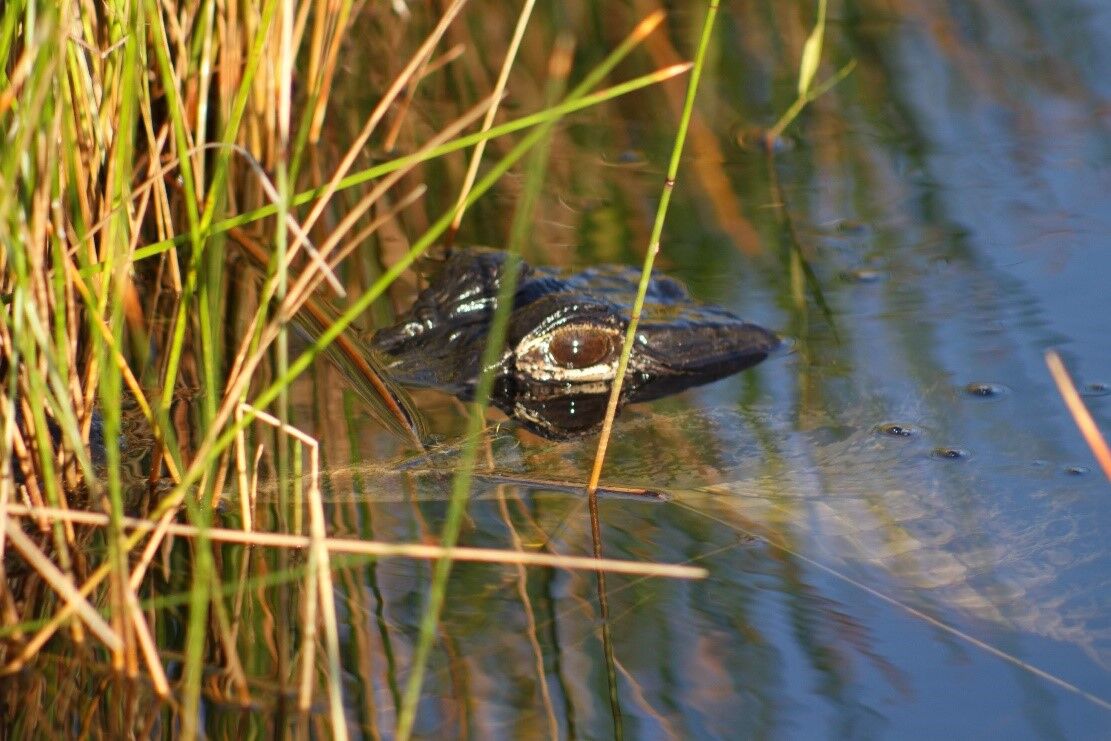 Many plants and animals, like spikerush and America alligators, both pictured, rely on sloughs in the park for continued survival.

This is the first of a three-part series on the recent historic water levels.  Stay tuned for a deeper dive into what effects the high water levels are having on the park’s natural resources.

If you live in South Florida, you are probably aware that we had a very wet fall. Water levels were high even before the passing of Tropical Storm Eta in mid-November, which brought more rain and caused devastating flooding in some South Florida communities.

For Everglades National Park, rainfall and restoration-related water management changes caused the trickle of water it had been receiving prior to September to quickly become a torrent. As a result, water levels in the park rose to be among some of the highest on record.

Having worked in and pondered the hydrology of Everglades National Park for a decade, I wanted to see those historic water levels firsthand. So, I packed up my mommy-wagon one bright October day and headed out to the park.

The first thing I noticed when approaching the entrance—that any regular to the park would have noticed—was the standing water on either side of the road, with water even flowing over the road in some places. It was so deep on a few access roads and on the Shark Valley Loop Road that the park temporarily closed those areas to keep people and the park’s resources safe.

That was in October, the very beginning of our abnormally wet fall season.

South Floridians should be used to a monsoon-type rainfall pattern. South Florida receives about 70% of its annual rainfall during the six-month wet season, which spans from May to October.

Although on paper the dry season starts Nov. 1, weather is variable, and precipitation can continue to fall after that date. This is especially true if there is a late-season tropical storm. True to form, 2020 delivered a wallop of a late-season storm.

Tropical Storm Eta dumped up to 16 inches of rain on parts of South Florida and made for a very wet start to the dry season.

When I visited in October, I stopped at the wayside between the two bridges that span Taylor Slough on Main Park Road. I had intended to walk to the staff gauge on the north side of the road to check the water level and take some pictures. Seeing how deep the water was, I opted for the telephoto lens instead of going swimming.

Looking out over the slough that day, it was easy to imagine traveling by dugout canoes or skiffs like people did in a pre-industrialized world. Don’t get me wrong. Wading through a flooded wetland is fun, but the novelty wears off as the distance you travel increases.

Paddling is a much more efficient use of energy, though water levels must be high enough to do so in the freshwater Everglades. In fact, high water levels make the Marjory Stoneman Douglas Wilderness, which encompasses over 85% of the park, more accessible for paddling.

Thinking of paddling in the pre-drainage Everglades made me wonder if flooding occurred then like we're seeing now. I asked park ecologist Jed Redwine. He said the historic Everglades could only hold up to about three feet of water because physics and geology of the region prevented deeper water levels.

The Everglades as we know it has been compartmentalized. It was re-engineered to contain and move water between its now separated basins using levees, canals, locks and pumps. The only places that water levels can rise to more than three feet are those where people have intervened to contain water.

Everglades National Park is not one of those places. Other than a few roads that may alter its course, the water there flows naturally.

In relation to sea level, the highest water levels in the park will always be where water flows into it from the north or falls onto it as rain. Water in the park flows gradually downhill along the elevation gradient toward the ocean.

On the way, the water spreads out and some is absorbed into the porous bedrock. As a result, the water levels in relation to mean sea level decrease generally from north to south.

This was how the historic Everglades worked as well. We changed the Everglades to open up new land to development and agriculture and to maintain our source of drinking water. Now that South Florida has grown into a megalopolis that spills over into areas that are more vulnerable to flooding, the water management of the region is more critical than ever.

A new water plan implemented in 2020, the Combined Operational Plan, prescribes increased water flow to the park during the dry season, a time when the park’s tap was often cut off.

New infrastructure installed as part of the Central Everglades Planning Project South is reopening a historic flow path in the park, Northeast Shark River Slough. Sloughs are deep sections of the Everglades that are fundamental to a properly functioning Everglades ecosystem. Restoring flow here goes a long way to restoring the park. Looking ahead, the water levels in the park are expected to gradually decrease over the next five months, which are expected to be fairly dry.

Until then, there remains plenty to experience in the park. For one, bird activity is very high, making birding exceptional right now. I saw many wading birds hunting along the roadside during my visit. We’ve also been receiving reports that fishing is currently outstanding in the marine areas of the park.