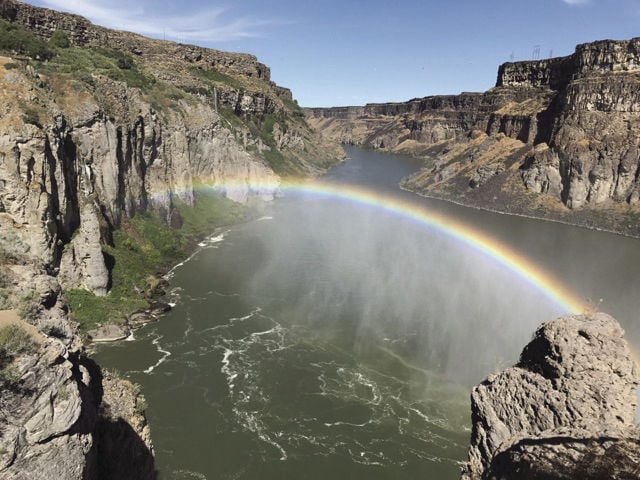 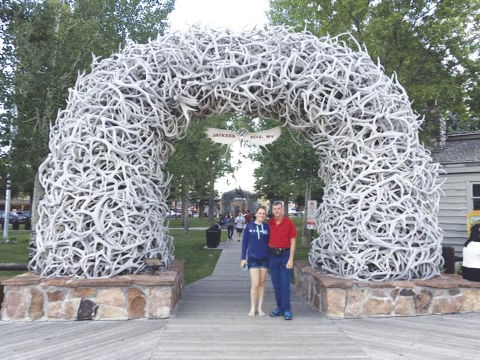 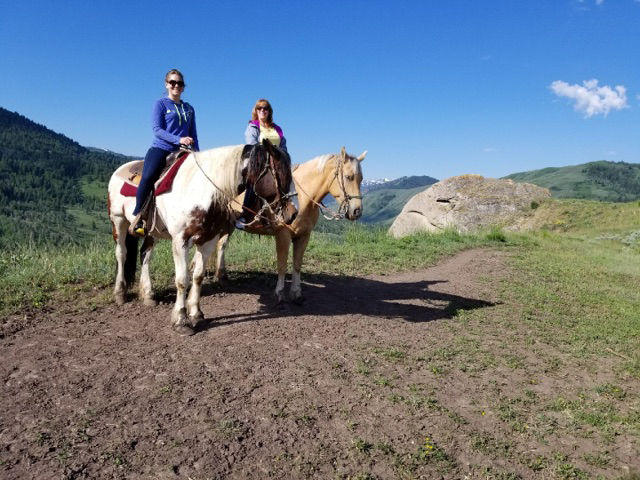 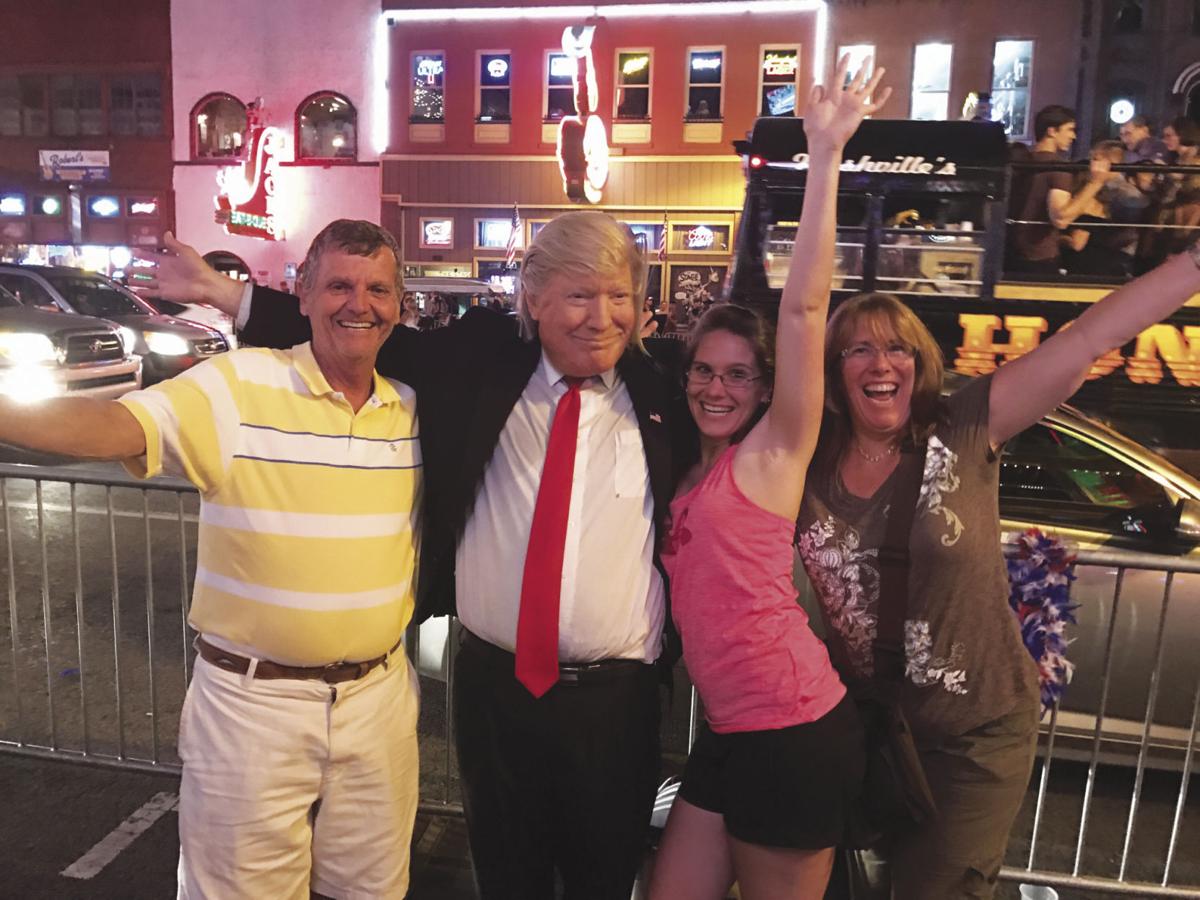 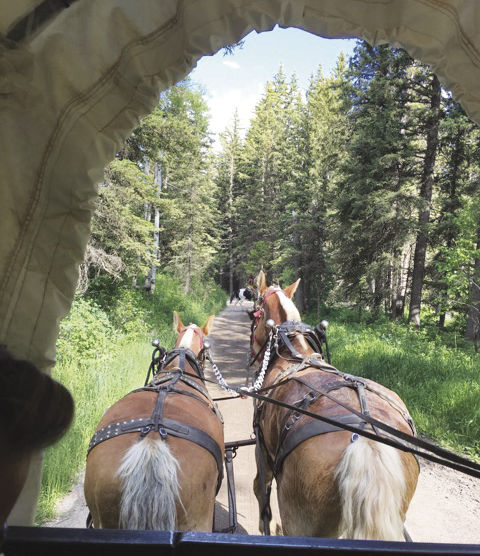 Europe might beat “US” for art and history, simply because of age.

But there is no question the United States of America stands its ground when it comes to natural beauty. This travel log is my hope to describe the great beauty my family saw and shared while zig-zagging cross country from Oregon to our home in South Dade. Neither words nor photographs can convey what we experienced and what I etched in the “pages of my mind.”

We arrived in La Grande, Oregon after a 3-hour drive from Boise, Idaho, the final leg of our air travel. La Grande is a small town with just under 2,000 friendly folks sandwiched between some spectacular mountains. Cars actually stop to let pedestrians cross the street without blowing their horns. Spent a rainy day or two relaxing before our youngest, Michelle’s, graduation from Eastern Oregon University. The evening of the 16th we enjoyed a small celebration ceremony for on-line students. Several graduates spoke of hardships in their lives and how they returned to college against all odds. With the help of the dedicated staff of EOU, now they were dressed in cap and gown.

The next day brought sunshine for the outside ceremony for 450 graduates. Though the ceremony was a little long, all waited to hear their love one’s name called. After, it was off to dinner then to a play I saw posted in Elgin…Seven Brides for Seven Brothers. Having seen the original movie as a child, it has become a classic in our household. It seemed ironic that the theme of the movie took place in the very state we were visiting. By morning we had stuffed Michelle’s whole apartment into her Toyota Corolla leaving just enough room for Patty, Michelle and myself.

On June 18th, the real adventure began as we headed to Twin Falls crossing the Perrine Bridge over the Snake River Canyon close to the site of Evel Knievel’s failed attempt to jump on his motorcycle. It was on to Shoshone Falls, a spectacle larger than its northern cousin, Niagara. There are no night lights to magnify its beauty, but during the day it is illuminated by several rainbows. From there it was on to shorter but wider Idaho Falls. Though not quite as impressive it was worth the extra miles. That evening we were able to bed down at the Anvil Motel in Jackson Wyoming.

JACKSON, WYOMING is an exciting town with much to do. After touring the city, we decided on a Covered Wagon Cookout. By chance we picked a “winner” at the Bar-T-5 Ranch, a family owned and operated enterprise with an impressive history.

In 1856, at the age of 12, young Nick Wilson was lured away from his home by the Shoshone Indians for the promise of a pony. He would be adopted and raised by the mother of the Chief. Years later he would ride for the pony express, then drove the overland stage. Nick would go on to bring the first settlers in covered wagons through Teton Pass, the entrance to Jackson. As he aged, he would be affectionately known as “Uncle Nick.” Nick’s grandson, Bill Thomas would open the Bar-T-5 Ranch.

In 1983, the Thomas family began their wagon/dinner rides. Years later the Warburton family would purchase the ranch and continue the over 40-year tradition of sharing Great Western Hospitality.

We would have loved to do a 4-day wagon trail but settled on the 3-hour Wagon-Dinner Cookout-Show. The wagons traveled through the back country to a remote setting in the woods for a Dutch oven dinner. Great entertainment including one of the talented owners, Chris with a three piece band that included an expert fiddle player. The program included a lot of audience participation with my daughter Michelle taking the stage for a skit. This is a must do for a reasonable price of $46 per adult. For information contact info@bart5.com. Tell them the newspaper guy from Homestead sent ya!

HAPPY TRAILS AT THE A-OK CORRAL

We awoke early the next morning after a comfortable night at the Anvil Motel in the heart of Jackson. It was off to a dude ranch for a 2-hour trail ride.

We were greeted by husband/wife team Kevin and Jennie Smith. After mounting my horse, I realized my hip had not recovered enough to bear the ride so, with the aid of a ladder I dismounted and spent the time in a rocking chair trying to catch up on my story. Learned that Kevin has been working at this ranch for over 20 years…seems everyone in the tourist industry out here loves their jobs.

Before I knew it, my cow girls returned, a little sore but full of stories and pictures of their adventure. I recommend this to anyone who is flexible and young at heart. Check them out at aok@wyoming.com

Later that evening we walked the town taking many pictures. We came across a famous bar that’s been around since the early 1900’s. We entered the swinging doors and moseyed up to the bar that had hundreds of silver dollars embedded in the bar top but the unique thing about the bar was that the stools were saddles, exactly like the one I avoided earlier in the day! After one local beer, it was off to the sack for tomorrow we were headed to the Grand Tetons.

Today it’s the Grand Teton National Park. At the Ranger Station, I whipped out my life-time National Park pass that I bought when I turned 65 for ten bucks. This trip alone we have saved hundreds of dollars as everyone you can squeeze in the car gets in FREE. We were blessed with perfect weather as we did the loop. The variety of colors were enough to make an artist thrilled, as eyes drifted from the blue lakes to the green of the grasslands and trees to the earth tones of the mountains capped with the white of the snow and the clouds.

Next week: Wyoming and South Dakota