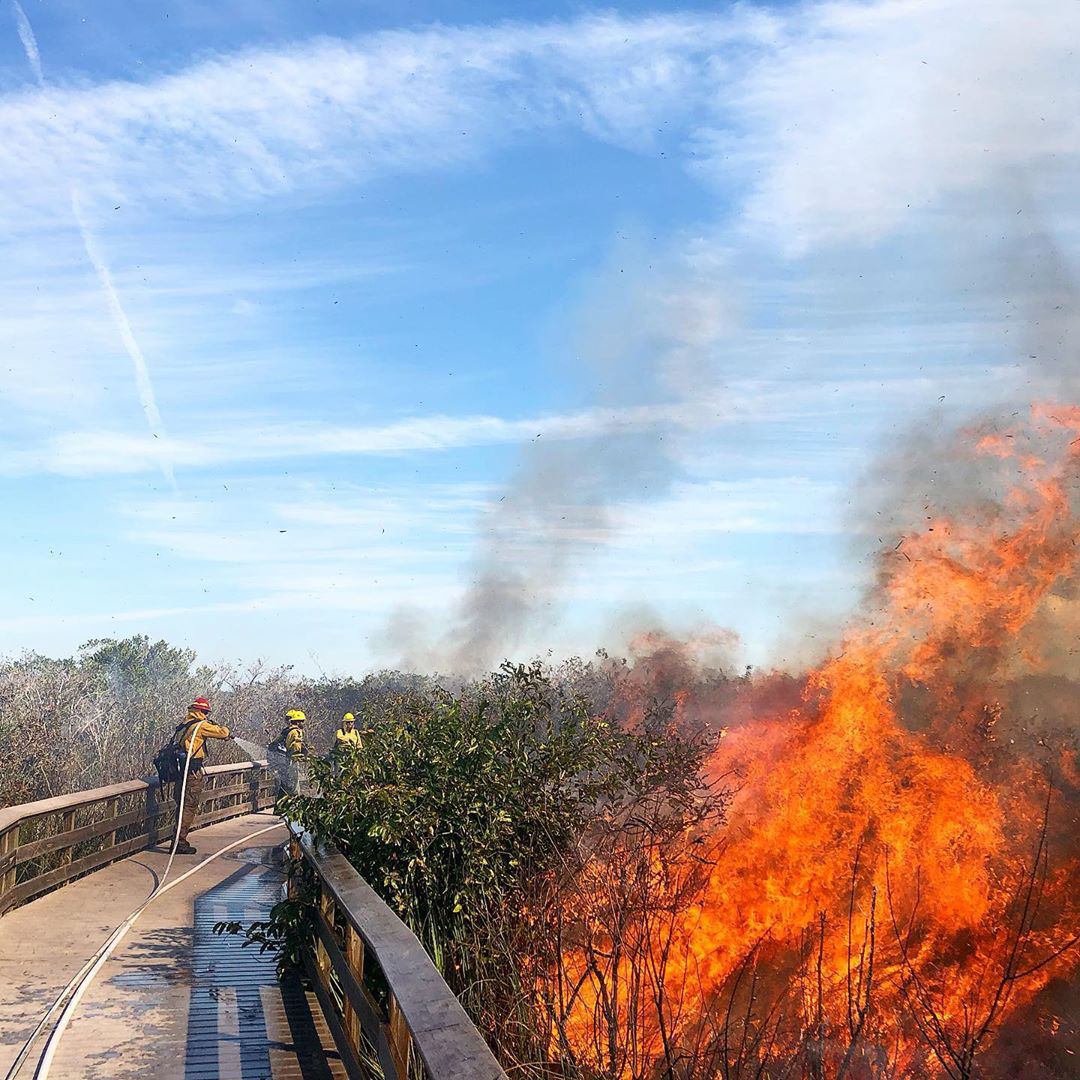 During (above) the Royal Palm fire. Fire crews used drip torches to light the prescribed, or planned, fire. Prescribed fire is used to clear vegetation to lessen the chance of wildfire.             NPS photos by Michael Gue 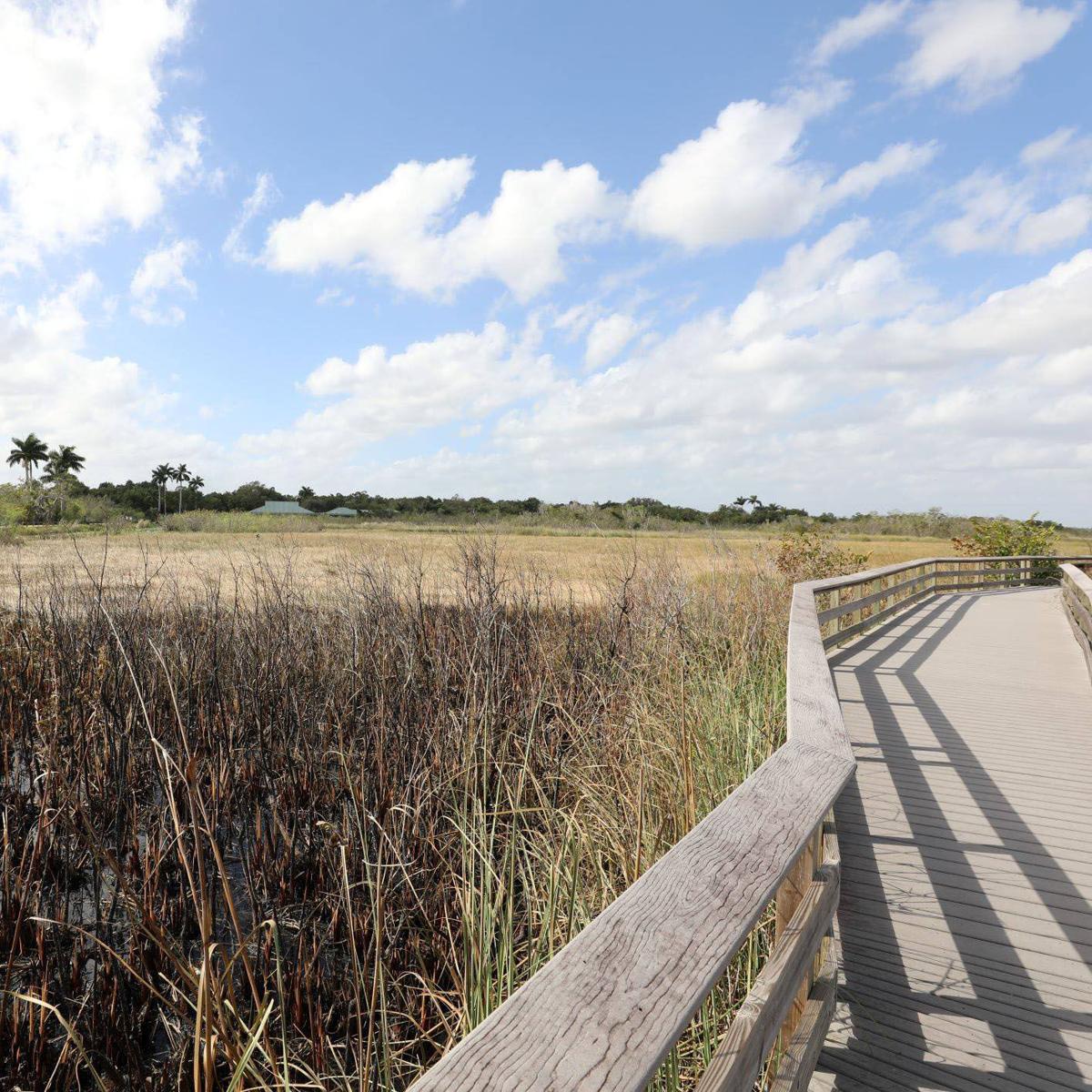 After the Royal Palm fire. Prescribed fire is used to clear vegetation to lessen the chance of wildfire.

During (above) the Royal Palm fire. Fire crews used drip torches to light the prescribed, or planned, fire. Prescribed fire is used to clear vegetation to lessen the chance of wildfire.             NPS photos by Michael Gue

After the Royal Palm fire. Prescribed fire is used to clear vegetation to lessen the chance of wildfire.

The Royal Palm area at Everglades National Park is on fire. Smoke fills the air, and wind blows burnt plant debris up into the sky and, sometimes, into people’s faces.

Visitors watch from safe vantage points along the Anhinga Trail as sawgrass and tall Phragmites reeds are engulfed in flames.

They hold their breath as the flames come closer and closer to a resting Great Blue Heron, and then breathe a sigh of relief once the bird flies away to safety. Wildlife can easily escape from slow, controlled fires like this one.

But all this was planned.

On January 8, members of the Everglades Fire Program met early in the morning to set up for the fire and then held a debriefing meeting to make sure everyone was on the same page.

Collier is the burn boss for the day. He tracks weather conditions, coordinates the fire crew, and keeps all authorities notified on the fire’s status. He is also

responsible for the safety of both the public and the firefighters.

He tells us about how the water levels and moisture are high so we should expect very smoky conditions. I learn that the wind conditions are favorable now, meaning that there is enough to spread the fire, but not too much to cause it to disperse too quickly.

The fire crew seems unfazed. Although they are taking all precautions seriously, this is a relatively easy and routine burn for them. They pour flaming fuel onto the ground using drip torches, and start the prescribed, or planned, burn.

Planning Fire in the Park

The park has had a prescribed fire program since the 1950s.

Up until that point, people did their best to suppress fire. But Dr. Bill Robertson, a fire ecologist who worked at Everglades National Park, showed that the Everglades benefited from fire.

In the pine rocklands, fire triggers the pines to regenerate. It opens up the habitat so that light can reach the bottom of the forest floor, allowing new and smaller plants to grow. Native plants there often flower after they burn.

Fire in sawgrass prairies removes dead vegetation, which allows water to more easily flow through the Everglades, and improves habitat for animals by creating a mosaic of vegetation types.

And most other ecosystems in the park, including coastal prairies, need fire to survive as well.

As a result of these findings, the park instituted the first agency-approved prescribed fire in the

Since then, prescribed fire in the park has been used not just to maintain a healthy Everglades, but also to prevent disastrous wildfires. That’s because prescribed fire can remove the excess vegetation, or reduce available fuels, that can feed wildfires and cause them to get out of control.

And as Collier had noted in the debriefing meeting, a fire can open up the Everglades habitat and allow us to see the park as it would have been when it burned more naturally.

Just an hour after the prescribed fire at Royal Palm, my view looking out over the Anhinga Trail boardwalk changed from tall strands of Phragmites to an expansive sawgrass prairie. Granted, it was still hard to see because there was a lot of smoke, but the sawgrass prairie was definitely there.

Would Royal Palm have burned without human intervention? Yes. It’s just a matter of when.

“The Everglades wants to burn, one way or another. You can either be proactive about it through prescribed fires or reactive when there’s a wildfire,” Michael Gue, Prescribed Fire Specialist for Everglades National Park, said.

Although the park has carried out prescribed burns for over 50 years now, fire management today is more difficult now than it was even twenty years ago.

There is now more urban sprawl into ecosystems that naturally want to burn, along with hotter and drier conditions resulting from climate change.

In response to this, the park has recently adapted a landscape level approach to prescribed fire management. Since 2017, just over 330,000 acres of the park have been burned, and fires are planned to burn approximately 170,000 more acres over the next 2 years.

For Gue, prescribed fire is necessary in fire-adapted ecosystems, especially in light of climate change and urban sprawl. These planned burns can save money, people, and the ecosystem.

“The numbers are simple,” Gue said. “It costs $500 an acre to manage a wildfire in the Everglades and less than $5 an acre to do a prescribed fire. Plus we are reducing the threat of fire in our cities and protecting our ecosystem, including threatened and endangered species.”

And, in fact, a prescribed fire recently saved one population of the federally endangered Cape Sable Seaside Sparrow living in the park.

In 2016, a fire broke out in the Long Pine Key Campground at the park. Because that area hadn’t burned in over a decade, the wildfire spread fast and burned hot.

The fire stopped just before the endangered bird’s territory. It ran out of fuel because excess vegetation had been cleared a year prior as part of a prescribed burn.

That population of Cape Sable Seaside Sparrow is still doing well, and it has a prescribed fire to thank for saving and protecting it.

The park is paving the way to show that being proactive about fire is the way to go.