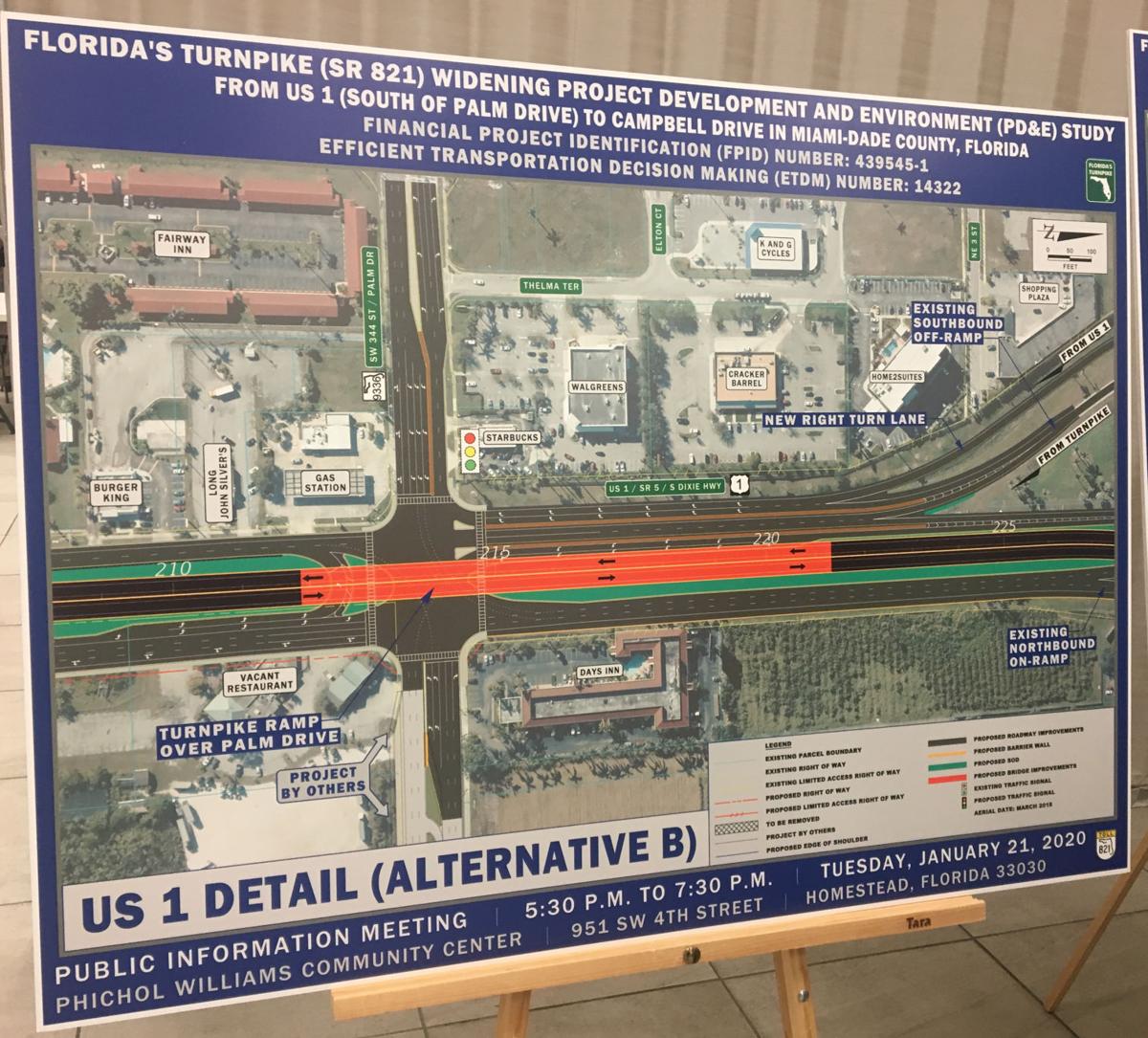 FDOT renderings of the proposed turnpike projects displayed at the Homestead/Florida City public meeting on Jan. 21. 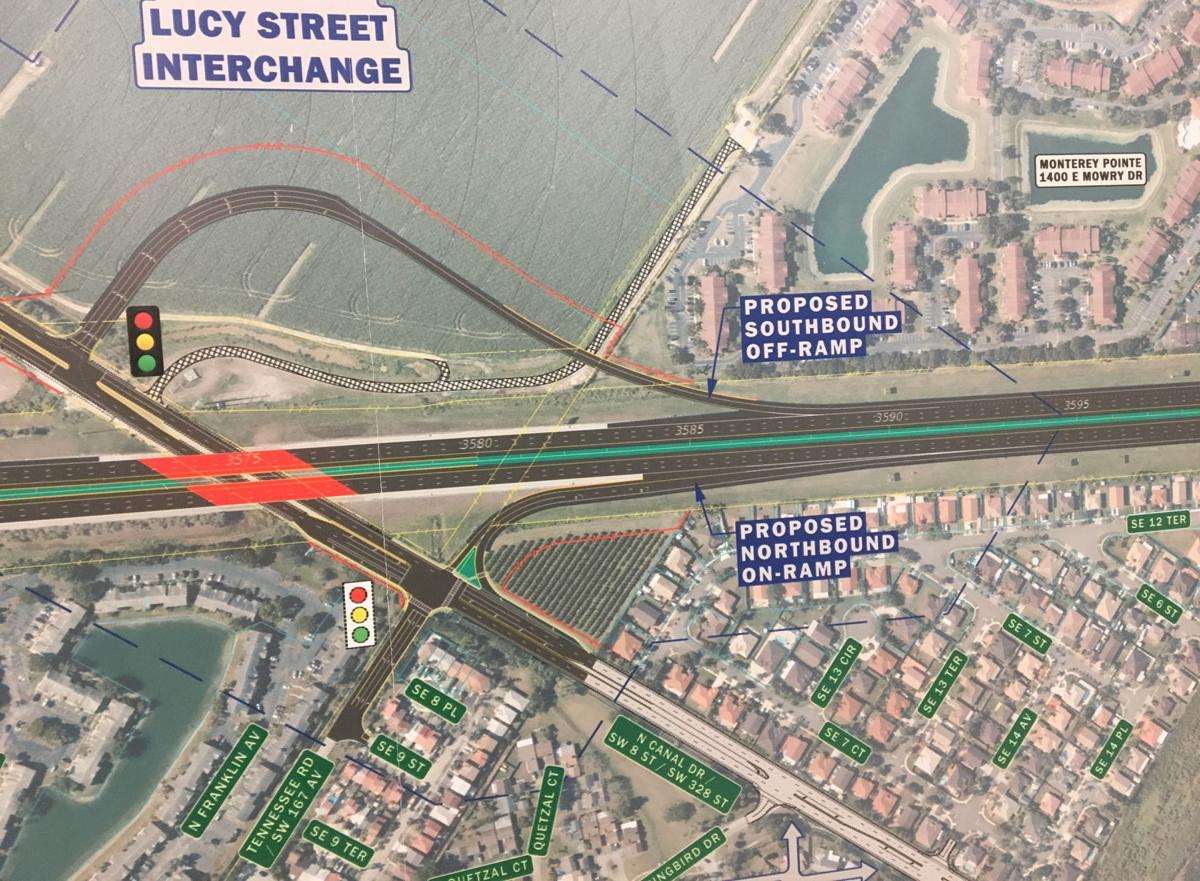 FDOT renderings of the proposed turnpike projects displayed at the Homestead/Florida City public meeting on Jan. 21.

The Florida Department of Transportation (FDOT) held a public information meeting on Tuesday January 21 to reveal the results of a project study to widen the turnpike locally. The study began in the fall of 2017.

FDOT proposes to widen the three mile turnpike stretch from Campbell Drive to US1 South to six lanes from four to improve evacuation and emergency response times.

In addition, the study looked at adding an interchange at Lucy Drive (SW 328th Street) as well as major changes to the US1/Palm Drive intersection. The Lucy Street addition would have one southbound off-ramp and one northbound on-ramp.

Other project objectives were enhancing safety and economic growth, according to FDOT’s distributed newsletter explaining the two project alternatives for the US1 interchange in Florida City.

Both plans show a long elevated exit ramp stretching from the existing turnpike bridge exit, down the middle of US1, returning to ground level in the middle of the highway where the last fast food places line the road. A proposed toll site is planned for the end of this extended ramp. The ramp would have one northbound and one southbound lane.

Existing turnpike on and off-ramps would remain, essentially becoming parallel local access roads. Current Exit 1 would be modified to become a Palm Drive right turn lane. A “traffic separator” on US1 above Palm Drive would “channelize local southbound traffic to reduce traffic weaving” under both options, according to FDOT’s newsletter.

More than a hundred people attended the meeting at the Phichol Williams Community Center in Homestead. Most disagreed that the plans promote economic growth, calling the project a “bypass”.

“Robert is Here, the Alligator Farm, the hotels, this will kill business!” said Florida City Commissioner R.S. Shiver. “Traffic isn’t going to turn around and come back.”

A family representative of Robert Is Here in attendance agreed.

“This has an impact not just on future building sites,” the Mayor added. “Several planned businesses called talking about not doing their projects. They’re scared to invest if people won’t be able to reach them.”

“This is absolutely devastating. Devastating!” said Brian Conesa of the Tropical Everglades Visitors Association. “The major concern is a bypass will eliminate Florida City (as a stop), a loss of jobs, hotel cancellations – 65% of our business could disappear. It’s a drive-by business. People will blindly follow a bypass to Key West.”

“This could hurt Homestead, too,” said Homestead Mayor Steve Losner. “(A local businessman) proposed to give the land for a Lucy Street interchange but the deal was the turnpike would pay 50% of the cost. Now they expect a developer to pay for it all.”

Both Mayors agreed that the design would not eliminate traffic backing and congestion on US1. Mayor Wallace said traffic would still back up as it enters the single lanes to the Keys on busy weekends.

FDOT’s plan is to collect comments from this public meeting. A public hearing will be held during the summer of 2020. A hearing is a formal procedure where public comments are recorded by a stenographer and made part of the permanent record.

The final step of the planning project is approval of the State Environmental Impact Report (SEIR) expected late this summer. The final SEIR is not expected before the public hearing is scheduled.

Noise impact studies are part of the SEIR and determine when and if sound walls are added along the turnpike to protect adjacent communities. Project material said no provision is made for sound protection of residential lots that are unbuilt at the time of the study.

Project costs are forecast between $149 million and $155 million. FDOT representatives said turnpike tolls and not state appropriations cover the expected budget. This project study is expected to be completed by the fall of 2020.

FDOT’s study noted the widening project is designed to reduce delays by 79% through the year 2045. Listing future traffic needs, the turnpike estimates new lanes by Campbell Drive are necessary by 2025, by 2042 along the roadway to Florida City, and the US1 interchange reaching capacity with needed improvements by 2028.

No estimated start date for project construction has been released.

As a student attending homestead senior, this project would be devastating to us! It would completely block us off from Florida city because of traffic! As it is currently, the canal “covering” has been going extremely slow at a snails pace, not showing signs of progress at all! The Lucy street expansions only make traffic even worse! These projects would be devastating to us student’s who are trying to get an education, effectively affecting most of florida city and part of homestead!