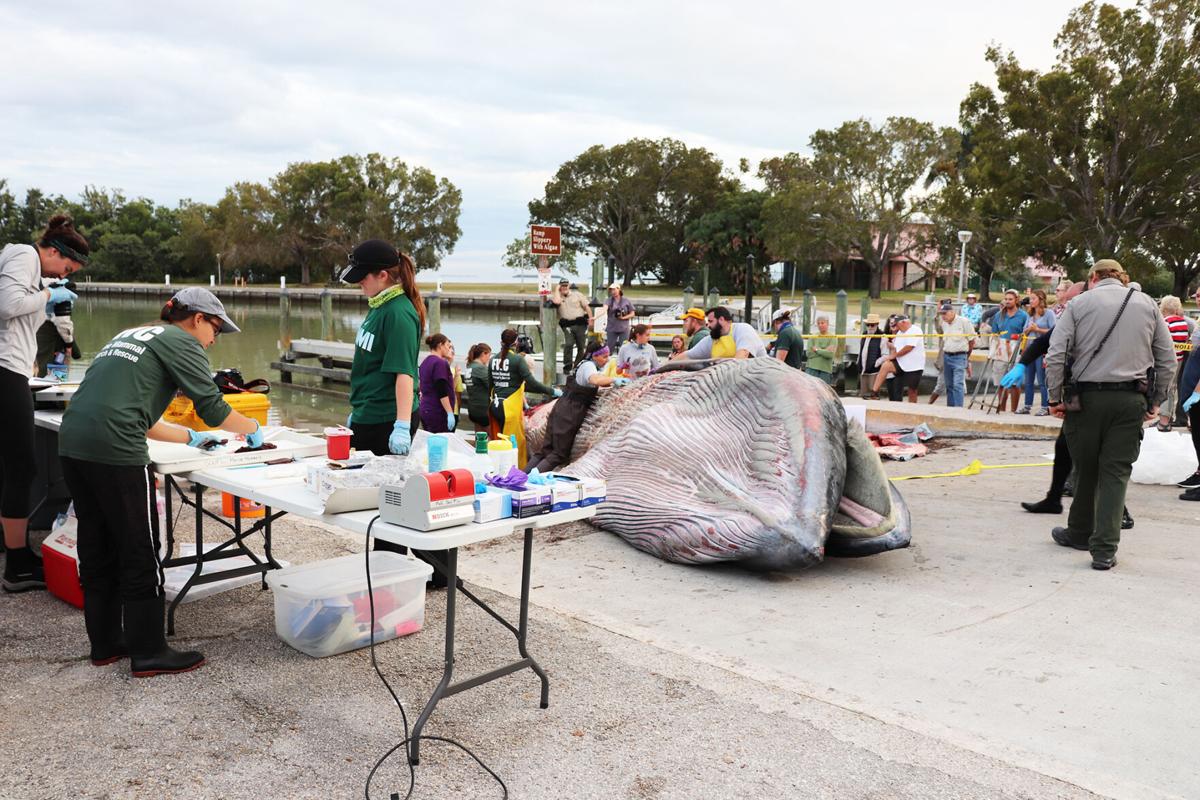 Trained responders from the Southeast Marine Mammal Stranding Network perform a necropsy—or an animal autopsy—on a Rice’s whale in the Flamingo marina at Everglades National Park. The necropsy found a piece of plastic lodged in the whale’s stomach, which led to its death. 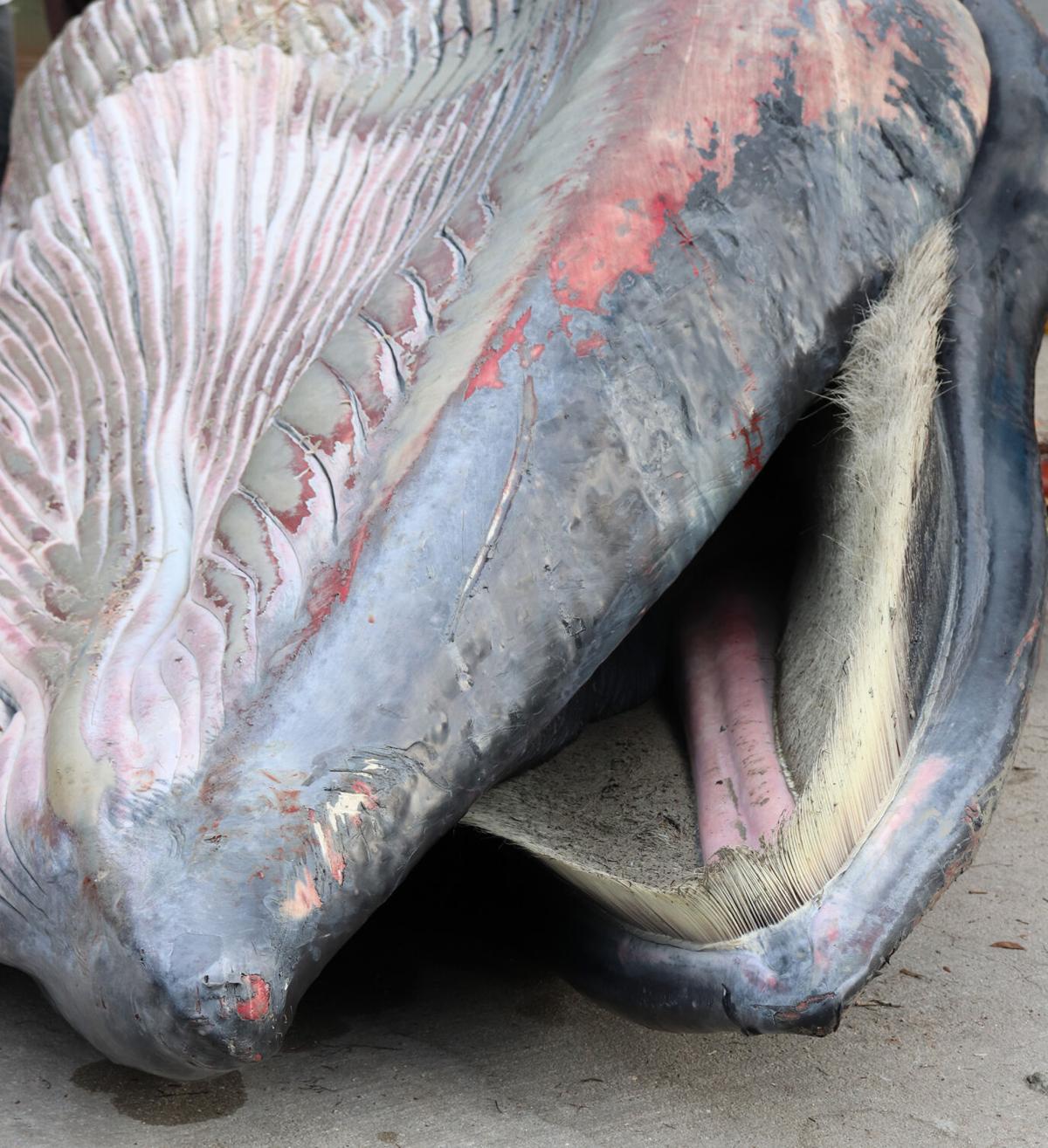 Rice’s whales are baleen whales that live in the northeastern Gulf of Mexico.

Shown above, baleen is a mass of thick, hair-like combs that whales use to filter out food from seawater

I would be willing to bet a large portion of my children’s college fund that if I asked visitors of Everglades National Park to name a type of animal found there, a baleen whale would not rank in the top 50 answers given. And yet, in late January of 2019, a baleen whale showed up in park waters.

In the whirlwind that followed, those who happened to visit the park’s Flamingo marina got to witness something quite extraordinary. And I’m not just referring to the whale itself.

Baleen whales, such as the charismatic humpback, are a group of large to massive whales that have rows of thick, hair-like combs in lieu of teeth that they use to filter food out of seawater.

Baleen whales typically stay offshore or in deep water so the appearance of one in the shallow, nearshore waters of Everglades National Park was not normal. But whale visitors to the park aren’t unheard of.

Strandings, when dolphins or whales purposefully or accidentally get stuck at or near the shore, are an occasional occurrence along the park’s 137-mile coastline. Just over two years before this baleen whale showed up, close to 100 false killer whales stranded in a remote area of the park. Four years before that, 25 pilot whales stranded on a different remote beach.

When anglers first spotted the baleen whale in park waters near Cape Sable on Jan. 27, 2019, they knew something was wrong. Sadly, two days later, the whale was found dead, its body lying on a shallow sand bank near Sandy Key.

The stranding was reported to the National Marine Fisheries Service, a part of the National Oceanic and Atmospheric Administration (NOAA) that is responsible for managing marine mammals in U.S. waters.

Scientists identified the animal as a rare Bryde’s whale, one they almost never get chance to study up close. Now racing a ticking time bomb of biology, trained responders from the Southeast Marine Mammal Stranding Network descended upon South Florida. Some even drove through the night to get on scene in time.

Since I work for the park in science communications, I was asked to be present to help answer questions from the media and the public about what was happening. I wasn’t going to pass up the chance to see a Bryde’s whale.

As I explained to numerous park visitors later that day, the fact that we got to see this animal at all, dead or alive, was remarkable.

Of course, the whale’s death was tragic and not something we should take lightly. Most whale populations face multiple human-related threats to their survival, and the loss of even a single whale can be devastating.

Marine mammal scientists, like many others studying species in danger, are in a race to learn about these animals to help protect them before they are gone.

Imagine you’re an alien and you are trying to study humans.

Unfortunately for you, the only time you can see them is for the brief period when they open their refrigerator door. You never know when they’ll do it or for how long they’ll stay peering into the fridge’s chilly depths.

My college professor, Dr. Shannon Gowans, uses this alien metaphor in her marine mammalogy courses to explain how difficult it is to observe whales and dolphins in the wild, since they live most of their lives below the surface.

Many species of marine mammal live far out at sea and they don’t broadcast when or where they are going to come up for air. Complicating things further, some are hard to spot at the surface and disappear below as soon as they’ve taken a breath.

Even when you’ve spent a few summers playing dolphin paparazzi for a comparatively easy species to study, like the bottlenose dolphin, animals that don’t want you taking their mugshots can still give you the slip. Not speaking from personal experience or anything.

Creative scientists have come up with new ways to study whales and dolphins where they live. For example, scientists, who have rebranded themselves as whale spies, record and listen to marine mammal communications to discover new information about where and how these animals live their lives.

Despite technological advances, the best method we have to understand marine mammal biology is still to study their bodies. For massive baleen whales, the only way to do that is to study dead whales.

Marine mammals have been protected from most intentional killing since the 1970s, so scientists have the macabre task of seeking out the remains of dead whales.

The whale that stranded in January 2019 was an incredible opportunity, one that marine mammal scientists had been waiting several years for. They had a whale of a mystery to solve and this animal’s remains could provide the evidence they needed to do just that. But there was a problem.

The whale had stranded in a location that was hard to access and where it would be difficult to perform a necropsy, or animal autopsy.

The responders hatched a plan to bring the whale’s body somewhere better suited for the work they needed to do—Flamingo marina. For that, they enlisted the help of the National Park Service and Sea Tow.

As the whale arrived in the Flamingo marina, towed in by a Sea Tow vessel usually tasked with salvaging boats, the responders went into action.

Scientific work in the park is typically methodical, deliberate. It was surprising for many of my fellow park staff helping out that day to see the urgency with which the responders worked. But with my knowledge of marine mammals, I knew what they were racing against.

Whales and dolphins have blubber to insulate their bodies from ocean water. When they die, that nice layer of blubber that keeps them warm in life also traps in heat as their bodies begin to decompose. With all that internal heat building up, they decompose incredibly fast.

Scientists studying marine mammals have to act even faster to get useable samples.

Now, looking back, I remember the responders’ fervor with renewed appreciation. The stakes were so much higher than I knew at the time. Everyone watching the necropsy that day was witnessing scientific history in the making.

Scientists suspected that the whale was what they were then calling a Gulf of Mexico Bryde’s whale from the northeastern Gulf of Mexico, a critically endangered subspecies of the Bryde’s whale seen worldwide. Genetic samples later confirmed this to be true.

At the same time, scientists were also trying to determine if the subspecies was, in fact, a completely different, though similar, species. They needed well-preserved remains of one of these whales from the Gulf of Mexico to confirm, and this stranding gave them that opportunity.

The responders took careful measurements and samples from the stranded whale during the necropsy. They found a piece of plastic lodged in its stomach which was determined to be the cause of its demise.

After the necropsy, the whale’s remains were buried and allowed to decompose for a year. Then its bones were cleaned and ultimately sent to the Smithsonian National Museum of Natural History to await further scientific study.

It was there that NOAA scientists and colleagues got the final evidence they needed to show that the stranded whale and those like it were not a subspecies of Bryde’s whale after all, but a separate and closely related species.

Scientists are hoping to name the new species Rice’s whale after Dale Rice, the marine mammalogist who first discovered the animals in the Gulf of Mexico. The name won’t be official until the Society for Marine Mammalogy Committee on Taxonomy reviews it. For now, the species is unofficially referred to as Rice’s whale.

It isn’t every day that you get to witness an event that leads to the recognition of a new species of baleen whale, but visitors to Flamingo in Everglades National Park on Jan. 30 and 31, 2019, got just that experience.

National parks offer diverse and limitless opportunities for people to experience and share the world. While being places for recreation and reflection, they are also places for conservation and discovery. Like the discovery of a new species of whale that was hiding in plain sight.

What should you do if you find a stranded marine mammal or sea turtle? Call a stranding hotline!

Visit NOAA’s website to find the hotline numbers for your state or region: