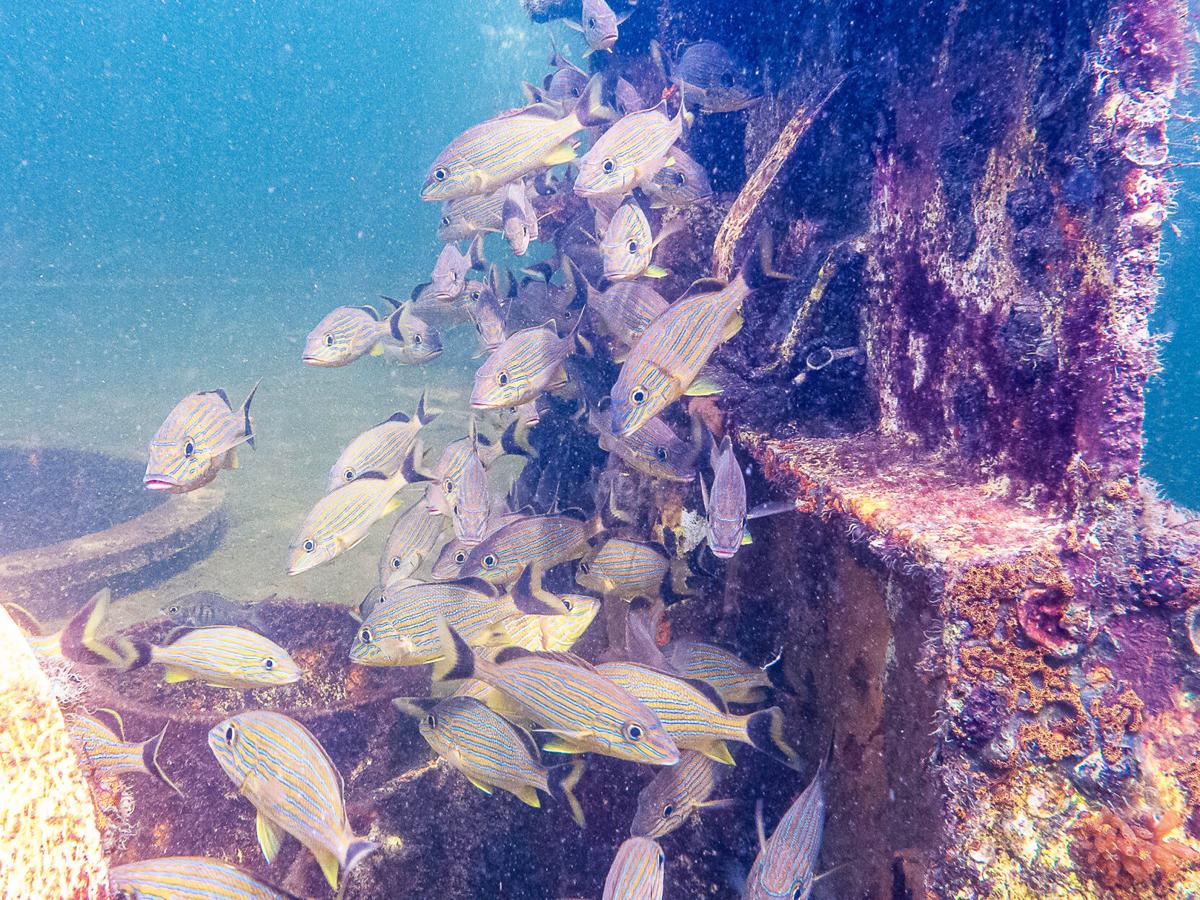 A school of French Grunts on top of the Lodge.

Jules Undersea Lodge sits in 25 feet of water in this Key Largo lagoon. The lagoon is used for scuba instruction and is also open for snorkeling.

In another sign of a return to normal, one of the area’s most unique attractions and lodging alternative has reopened to overnight guests.

Jules Undersea Lodge, located 25 feet underwater in Key Largo is the world’s only underwater hotel and 1 of 2 known underwater habitats. It closed to guests in winter of 2020.

After extensive maintenance, refurbishment, and testing it hosted its first overnight guest and Aquanaut student on May 20 and 21st. Ivan Francis came all the way from Indiana to spend the night underwater and to earn his Professional Association of Dive Instructors Aquanaut Specialty certification.

The Lodge, originally named La Chalupa, requires guests to use SCUBA equipment to swim down to depth and then up into the moon pool. The moon pool is an opening in the bottom of the lodge where the water is held out by air pressure. Built in 1971 and operational until 1976 La Chalupa was part of the Puerto Rico International Undersea Laboratory (PRINUL). Ian Koblick President of Marine Resources Development Foundation, a marine sciences educational organization now based in Key Largo, designed and managed the habitat during its time at PRINUL. After funding dried up the Habitat was decommissioned and eventually was moved to a boatyard in Miami. In the mid-1980’s Koblick acquired the habitat and converted it to Jules Undersea Lodge. The Lodge opened in 1986 and has hosted thousands of guests since in its 2 bedrooms and a common area.

It has also been used for education and undersea research programs.

In another connection to PRINUL, Koblick turned to Thane Milhoan who as a young man lived on the campus where his father was the Diving Operations Director to return the Undersea Lodge to operation. Milhoan relocated to Key Largo from Hawaii to take the job as Habitat Operations Manager.

He told the News Leader about the challenges of replacing the air conditioning unit, the refrigerator and numerous other repairs and upgrades. He also talked of future plans saying, “We’ll be doing live streams and other online education from the Lodge and have some great ideas for future programs and partnership. We are also looking forward to a 50 year celebration of the opening of PRINUL next year.”