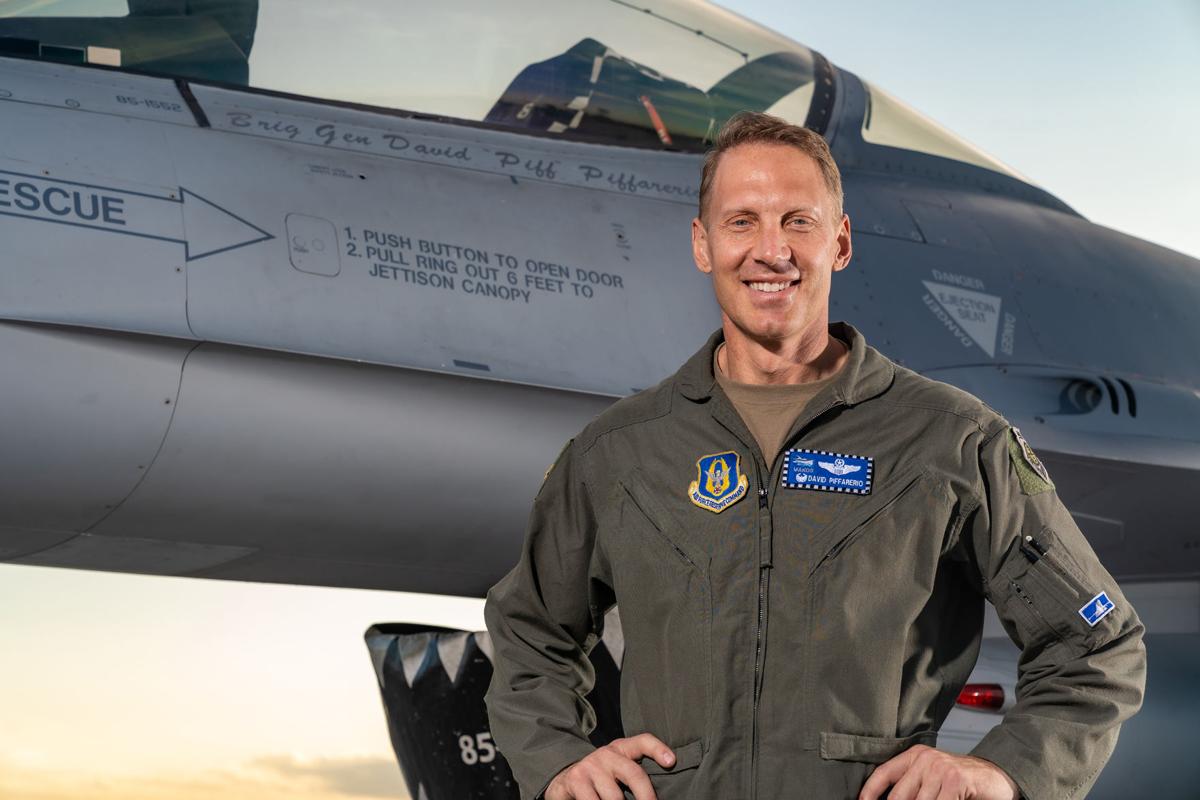 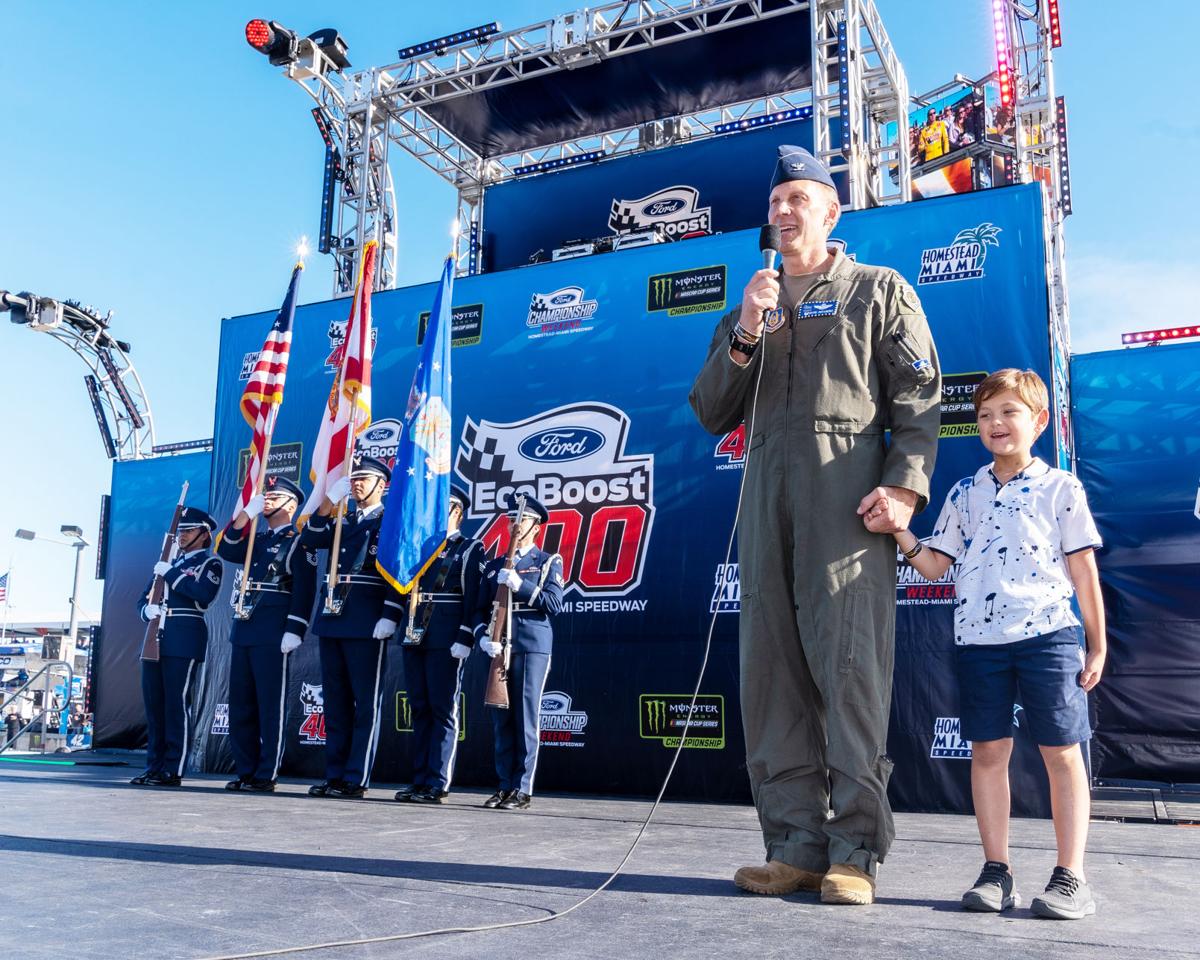 Colonel David Piffarerio, Commander, 482d Fighter Wing, HARB took the stage with his son Bryce to lead the Pledge of Allegiance, on November 2019 at the NASCAR Championship,  Homestead-Miami Speedway.

Colonel David Piffarerio, Commander, 482d Fighter Wing, HARB took the stage with his son Bryce to lead the Pledge of Allegiance, on November 2019 at the NASCAR Championship,  Homestead-Miami Speedway.

ceremonies. Standing on the stage with six-year-old son Bryce to lead the Pledge of Allegiance in front of a 60,000-plus crowd at Homestead-Miami Speedway for the NASCAR Championship was a new one for him though.

“I take Bryce with me to as many ceremonies and events as I can,” he said. “He knows all the words to the pledge; something they say each day in school. In looking at the large crowd, he was a little nervous, but the singer who did the National Anthem [Candi Carpenter] was really nice. She told him when she was nervous, she just imagined everyone in the stands was her friend.”

The ceremony they will attend in January 2020, however, will have a different focus. Son, wife Jennifer, his parents, two brothers, and other relatives will be present as Brigadier General Piffarerio has his public promotion. His nomination was recently announced and while the process normally takes a bit longer, he was notified Friday, November 22, 2019 that the new rank was

confirmed. Although the command position is designated for a brigadier general, it is traditionally held by a colonel who is not usually promoted barely one year into his assignment. “I’m honored to be selected and I want the airmen to know they are part of the reason. As their commander, I get to watch them as they grow and develop.”

There has indeed been plenty of activity throughout 2019, to include support to the Bahamas after Hurricane Dorian. With the path uncertain, they had taken precautions to evacuate twenty-one jets to Texas. As the destructive storm shifted, operations quickly moved into creation of a special joint task force consisting of approximately 500 airmen, soldiers, and sailors to set up an Interim Support Base. Twenty rotary aircraft made continuing trips to the islands to help assess where follow-on support was most critically needed.

For the Commander, it was a notable effort.

“Everyone pulled together and I was proud of what they were able to do.”

The holidays will bring some time to relax and then it’s back to work as usual for the 2,500 personnel who are a combination active duty Air Force association personnel, traditional reservists, Air Reserve Technicians, and full-time civilians as well as a geographically separated detachment of 35 Airmen at Shaw Air Force Base, S.C. Training for future deployments is always a top priority as well as routine day-to-day tasks. Decisions about how to operate during the current Continuing Resolution requires careful balancing of available funds and with the significant cost of the popular Wings Over Homestead Airshow, a final determination about the 2020 show will soon be made.

A distinction of command at HARB also entails the role of “Base Commander” in having varied tenant units that include the Air National Guard’s 125th Fighter Wing, Detachment 1 Alert Force, Headquarters, Special Operations

In this same capacity, the commander has oversight of major construction such as enhanced entry gate security into the base. They are in Phase IV, the final phase of the project, which should be completed within a few months. The new traffic pattern will include a round-about.

From a personal perspective, the Piffarerio’s are enjoying their time in Homestead. Even though Jennifer hasn’t fully embraced the intense summer heat, she is quite active in the Parent Teacher Student Organization (PTSO), the South Dade Chamber of Commerce/Military Affairs Committee, and all the HARB family support programs. “As near to our hearts as Alaska is, this has been the most meaningful assignment for us since we left there,” she said.

With Thanksgiving approaching and many events planned for December and January, the first couple of HARB wishes everyone Happy Holidays.