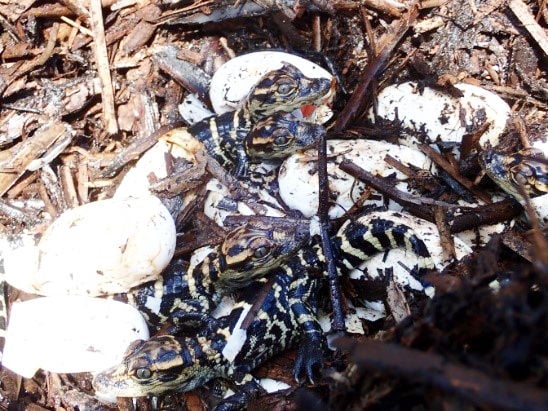 Baby alligators are seen here hatching from eggs. These babies were among the ones who survived their nest being flooded. 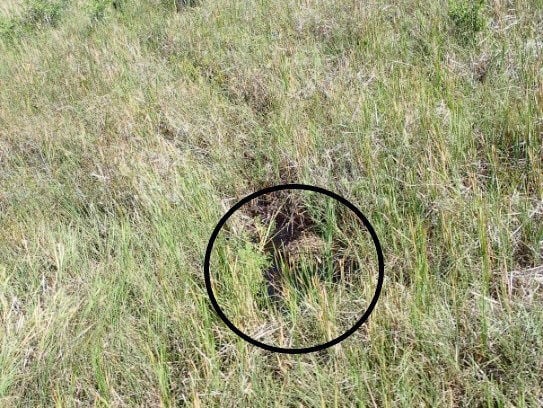 An aerial view of an alligator nest. Alligators are keystone species in the park because they modify habitat for many other species. For example, Florida red-bellied turtles will opportunistically lay their eggs in alligator nests. 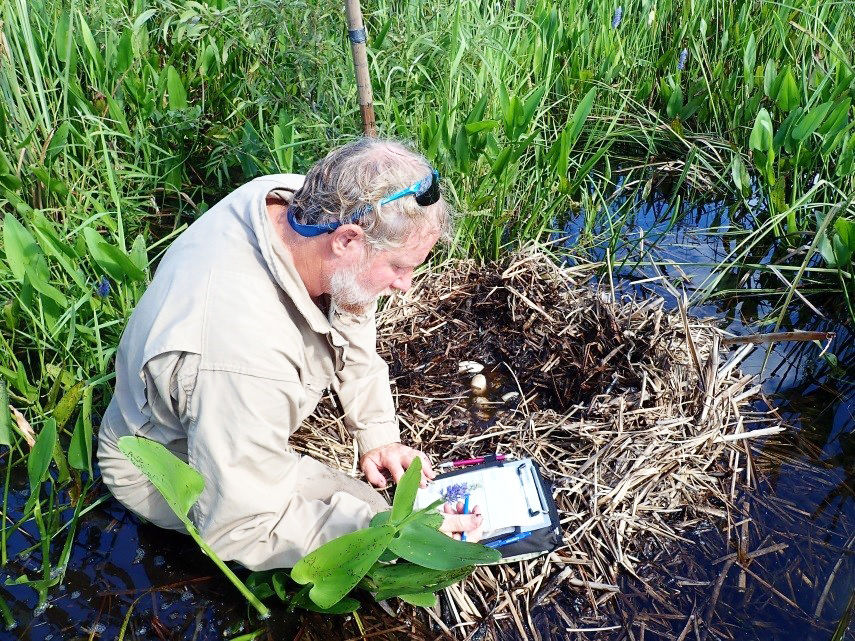 Mark Parry, a wildlife biologist for ENP, records information from an alligator nest.

Baby alligators are seen here hatching from eggs. These babies were among the ones who survived their nest being flooded.

An aerial view of an alligator nest. Alligators are keystone species in the park because they modify habitat for many other species. For example, Florida red-bellied turtles will opportunistically lay their eggs in alligator nests.

Mark Parry, a wildlife biologist for ENP, records information from an alligator nest.

It’s a sweltering mid-August morning, and the helicopter circles 50 feet over the sawgrass. As the aircraft turns towards the left, I see my first Everglades alligator nest.

Mama was definitely on my mind when I unbuckled my seatbelt and stepped out of the helicopter into knee-deep water. A female alligator can be very aggressive if you threaten her nest or her babies. As a new mom, I can relate, and so I was very afraid of her.

I followed Parry through sawgrass, clumsily moving through the Everglades with a long wooden stick. This stick doubles as both a way to approximate water depth and to defend against an attack from Mama.

Eventually, we arrive at her nest, a small mound made mostly of plant materials. I could see that the water was high around it. It was possible that the eggs had been flooded.

We are here to check on alligator nests. Parry starts these surveys in early July, when most of the female alligators capable of reproducing have built nests and deposited eggs.

After first locating where the alligator nests are, Parry checks on them every two weeks until September, when the approximately 60-day incubation period is complete. If he notices a negative change, such as a flooding event or if a predator has disturbed the nest, Parry lands again to check on the nest status and condition of the eggs.

The Park has carried out these alligator surveys since 1985. That’s when scientists recognized that despite nearly three decades of protection, alligators and other key animal groups within the park continued to decline.

“From the 1980s into the 1990s, most alligator nests were found in the center of the main sloughs, particularly the deepest Shark River Slough,” Parry said. “Alligators were concentrated there because few areas in the southern Glades held enough water throughout the year to support their needs, especially

during the late dry season onset of courtship, mating, and nesting behavior.”

When water would finally arrive in the southern Glades late in the wet season, it flooded the alligator nests that had already been built.

That’s because water would be held in upstream reservoirs, known as Water Conservation Areas, for human use. If water levels got too high, then large amounts of water would be released to protect against flooding. Most of this water flowed through the central sloughs and flooded the incubating alligator nests.

None of this was natural for the southern Glades or its inhabitants. Historically, water in Everglades slowly rose throughout the wet season and slowly fell throughout the dry season in concert with rainfall patterns. And alligator nests were more spread out because areas outside of the central sloughs had enough water to sustain them.

“For alligators, if you solve the nest distribution problem, you solve the flooding problem,” Parry said. “It’s like how you wouldn’t put all your money in one stock or all your eggs in one basket. Increasing the spatial distribution of nests decreases the impact that a very wet or even very dry year will have on all of the alligator nests that year.”

Past efforts to drain the southern Florida landscape, combined with water management decisions that halted the natural delivery of water in the Everglades, have had a negative impact on park’s wildlife. South Floridian’s drinking water was also threatened because it is dependent on freshwater flow through the Everglades.

Improvements to canal systems and water delivery schedules have been made to fix this by more closely mirroring natural patterns. The Everglades now receives more water at more appropriate times, and that water is more evenly distributed across the landscape than was the case for most of the mid to late 1900s.

Parry has noticed a positive change in alligator nests in the Park.

“In the 1980s, there were on average, only about 20 nests found in the sampling region,” Parry said. “In more recent years, we regularly see four to eight times that many nests even in less ideal conditions, and sometimes more in the best years. Perhaps most importantly, the distribution across the landscape has greatly improved even in years with less suitable conditions. So now, our gator eggs are no longer in one basket.”

But even if we get the water management right in South Florida, alligator nests will still sometimes flood, especially late in the wet season, and that is okay.

I remind myself of that as we start to open the flooded alligator nest, and fully expect to find eggs with alligator embryos that have stopped developing. I was wrong.

As I peered into the nest, I saw a speckling of colors, including green, yellow, white, and red, and it looked like they were moving. It took a minute, but it finally hit me. Baby alligators were hatching from the eggs with their embryonic sacs still attached.

Parry explained that these alligators were hatching early because the eggs were partially or fully submerged in water, which prevents oxygen exchange.

The only way these almost fully developed hatchlings could survive is by breaking out of their eggs early and wiggling their noses high enough to reach the surface. Alligators are nothing if not survivors.

Deeper in the nest, some of the eggs were completely covered in water. Almost fully developed baby alligators were inside these flooded eggs, but they hadn’t survived. I stopped taking photos.

“You should document these, too,” Parry said. “You have to show the full story. They don’t all make it.”

You can’t know that animals have the same emotions we do, and making the assumption that they do can cause more harm than good.

That is sometimes easier said than done and has been especially difficult for me since becoming a mom. Looking at these baby alligators who didn’t make it, Mama came to my mind again. This time, I felt more solidarity than fear.