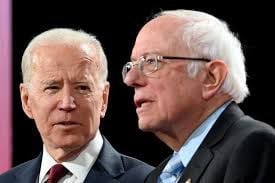 Joe Biden came away with a secure win after voting in Florida, Arizona and Illinois. 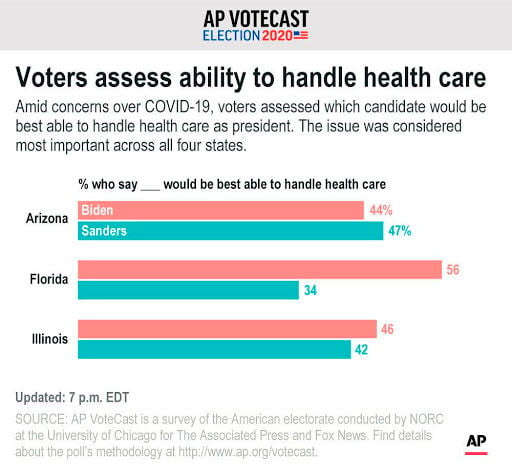 Joe Biden came away with a secure win after voting in Florida, Arizona and Illinois.

Joe Biden secured a decisive victory in Florida Tuesday night, in a contest where voters and election officials throughout the state girded themselves against the coronavirus while casting and distributing ballots.

The former vice president's Florida win cemented his front-runner status in the race for the Democratic presidential nomination against Vermont Sen. Bernie Sanders, building on Biden's lead by pulling in nearly 62 percent of the vote in Florida, with 97 percent of precincts reporting around 9:30 p.m. Tuesday night.

In the Republican primary, voters overwhelmingly backed President Donald Trump, with more than 93 percent of GOP voters supporting the incumbent on Tuesday.

Following his wins in Florida and Illinois, Biden exuded calm confidence and reached out to Sanders’ supporters, stressing the need for Democrats to unite, especially in a time of growing concern about the coronavirus, known as COVID-19.

“It is important to get through this crisis, protecting our public health and our democracy,” Biden said in a video Tuesday night. “My goal as president is to unify this party and to unify the nation. … The coronavirus doesn't care if you are a Republican or Democrat.”

Biden is now on pace to secure the majority of Florida’s 219 delegates, in a swing state that both parties maintain is crucial for a White House win in November.

Sanders, mirroring his performance in 2016, lost Florida’s primary by more than 30 percentage points. His defeat this year came after the Vermont senator praised certain aspects of Cuban dictator

Meanwhile, Biden received the endorsement of many state Democratic lawmakers and made solid gains in the Democratic contest over the last two weeks, stemming from multi-state Super Tuesday victories on March 3.

At 9 p.m. Tuesday, Biden led Sanders in all of Florida’s 67 counties, including landslide wins in Democratic strongholds such as Miami-Dade and Broward counties.

“America needs unity and steady leadership. Florida voters said emphatically tonight that Joe Biden can deliver that in this moment of historic

crisis. He will unify Democrats and build a diverse coalition in

November, one which will include a woman at the top of the ticket,” Broward County Congresswoman Debbie Wasserman Schultz, a former chairwoman of the Democratic National Committee, said in a prepared statement Tuesday night.

Florida was one of three states that held elections on Tuesday, despite growing fear and social restrictions triggered by the spread of the coronavirus.

Some other states, including Georgia, postponed Tuesday’s presidential primaries, following federal recommendations to end gatherings of 10 people or more. But Florida’s election forged ahead with the help of election officials who stocked precincts with hand sanitizers, soap and disinfectant wipes.

Secretary of State Laurel Lee told reporters Tuesday morning that some counties saw a shortage of poll workers, partly due to fears about COVID-19.

Teresa Lee, a 55-year-old Tallahassee poll worker, said Tuesday she was not scared of being exposed to the coronavirus while working at the precinct, citing her good health. But she did notice other co-workers were compulsively cleaning tables and voting equipment.

Clad with blue latex gloves, Lee said she was tasked with opening the door for voters, some of whom, she said, came in wearing face masks.

Speaking to reporters after the polls closed, the secretary of state said some precincts in Palm Beach County opened late. In Lee County, law enforcement officers shut down one precinct in an action she said was “not in any way related to COVID-19.”

“We worked very hard, as did the supervisors of elections, to ensure that Florida’s voters had accurate and up-to-date information about the types of

precautions that were being taken at our precincts,” Lee said.

Concerns about the rapidly spreading coronavirus prompted a coalition of left-leaning groups to file a last-minute lawsuit on the eve of Election Day.

The civil-rights organizations accused the state of violating Florida voters’ constitutional rights for failing to extend vote-by-mail deadlines and adjust early voting dates in the face of the pandemic.

But U.S. District Judge Robert Hinkle refused to take action on the group's request to extend voting deadlines, ruling mid-day Tuesday that “the healthcare emergency is not a basis to cancel an election.”

“At this hour, with voting in progress, a temporary restraining order would be adverse to the public interest. At least until the polls close, and under all the circumstances, it will be in the public interest to allow the governor,

secretary of state, and supervisors of elections to perform their respective roles,” Hinkle wrote in Tuesday's decision.

At a press conference prior to the ruling, Lee said the state already provides voters with primary-day voting flexibility, and brushed off requests to extend the vote-by-mail ballot deadlines even as public health officials advised against gatherings of 10 or more people.

“In Florida, we are very fortunate to have a number of ways that voters can cast their ballot. Unlike some other states, Floridians can vote on election day. They also had the opportunity to vote in early voting and of course, we allow vote-by-mail for all voters who want to exercise that action,” Lee said.

Nearly 2 million Florida voters cast ballots early or by mail as of Sunday, Lee said. About 30 percent of registered voters --- 2.9 million --- cast ballots in Florida's primary races, according to the state Division of Elections.