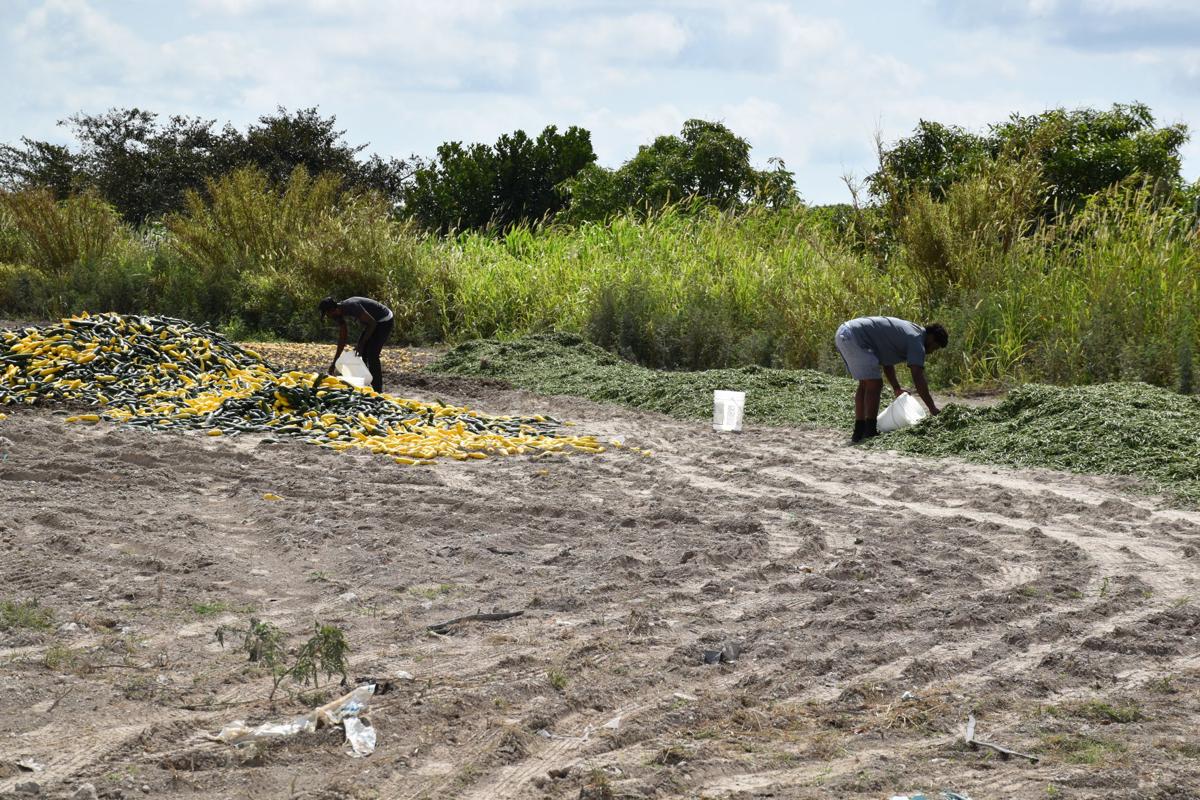 Men scavenge abandoned squash and beans in a farm field off Krome Ave. 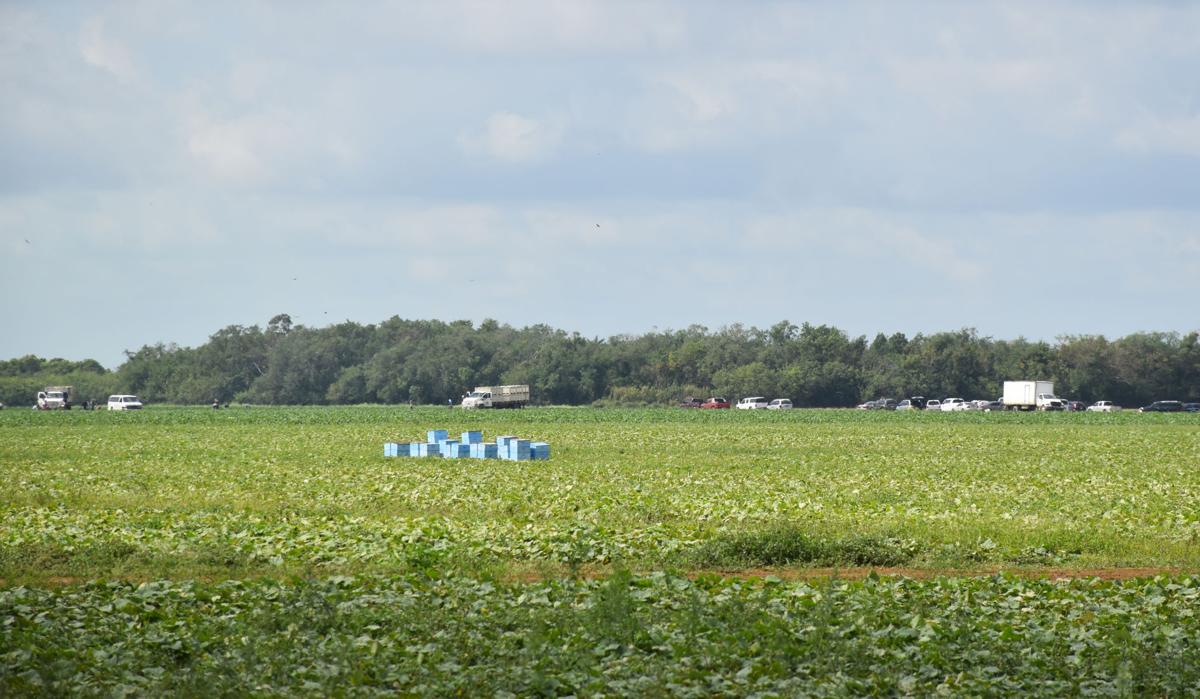 harvesting in the Redland on Tuesday.

Men scavenge abandoned squash and beans in a farm field off Krome Ave.

harvesting in the Redland on Tuesday.

Agriculture policy and government support in the age of the coronavirus was the chief discussion topic.

Hosted by the Florida Farm Bureau President John Hoblick, the briefing dealt with the stimulus legislation passed the week before. Hoblick said in this crisis people especially want to know about their food sources and whether they were safe.

Commissioner Fried listed her immediate priorities for helping agriculture during the COVID-19 crisis. Her Department is gathering information about the supply inventory, working with the USDA to fight illegal foreign dumping of produce, and coordinating action with other departments, such as the Department of Corrections’ initiative to buy fresh food for its institutions.

The Commissioner encouraged the effort to use monies from the federal stimulus bills to purchase additional commodities for families in need. She sent a letter March 31 to U.S. Secretary of Agriculture Sonny Perdue to have the USDA allow Florida local growers to participate in federal food purchase and distribution programs.

“Florida growers are reporting major losses,” the Commissioner’s letter to Perdue states. “After donating hundreds of thousands of pounds of fresh produce to local food banks, there are reports of millions of pounds more that will go bad. I urge you to act swiftly to get the $9.5 billion in agriculture financial assistance into the hands of our farmers impacted by COVID-19 as quickly as possible.”

Commissioner Fried noted that Florida leads the nation in the production of tomatoes, green beans and peppers that are ready to be harvested now.

Dade County Farm Bureau Board President Tom Rieder said, “People don’t realize how perishable the crops are - only good for a few days. We’re at the end of our growing season so the produce is thrown in the fields when you have problems with the contracts for delivery.”

“Congress has to act to protect our growers,” Accursio said. “Mexico continues to dump produce here while our farmers are plowing fields under. We need to limit imports during this crisis.”

Fried said her Department was working to redirect internal resources such as monies for trade shows to programs like commodity purchases for schools. She commended the partnership with Feeding Florida and its regional network in supplying food banks and boosting distribution around the state.

The Commissioner spoke briefly about other disaster assistance under the federal stimulus package. There was some misunderstanding about application of federal disaster relief loans to agriculture. The national SBA office held that Economic Injury Disaster Loans (EIDL) were only open to aquaculture and nursery businesses.

Senator Marco Rubio as chair of the Senate Committee on Small Business and Entrepreneurship sent a nonpartisan letter April 3 to the SBA clarifying congressional intent on the stimulus legislation. The letter explained to SBA Administrator Jovita Carranza that Congress intended to temporarily expand eligibility. The CARES stimulus Act extended coverage to types of businesses with less than 500 employees as well as to individuals operating as sole proprietors and independent contractors during 2020.

Senator Rubio’s letter stated that without a physical disaster footprint, USDA disaster assistance was not triggered and therefore was unavailable. The Senator asked the SBA to offer guidance for agricultural businesses to allow access to the EIDL program during the COVID-19 situation.

Congresswoman Debbie Mucarsel-Powell said in a conference call on March 26 that the Commodity Credit Corporation was to be given a supplemental appropriation of $14 billion under the CARES stimulus legislation.

That Corporation is the principal funding mechanism for the major USDA programs. The money allowed program expansion expressly in support of agricultural businesses.

PPP provides loans as a direct incentive for small businesses to keep workers on their payrolls. The legislation expressly allows use of Farm Credit System institutions as loan originators.

Applications are supposed to be available through June 30, 2020. The loans are fully forgiven if at least 75% is used for payroll with the remainder spent for mortgage interest, rent and utilities. Payments are deferred for six months, no collateral is required and no fees are charged.

There are widespread reports of the online application system already closing due to tremendous demand. Wells Fargo set aside $10 billion for the program and stopped taking applications April 5, according to CBS news. Most banks are only processing applications for existing clients.

Emergency bridge loans through the SBA are available for up to $50,000, the first year interest free, with an application deadline of May 8, according to the Commissioner. Interest rates on those loans increases to 12% after the first year.

Accursio was asked about the Commissioner’s work for commodity purchases through other Florida Departments. He said, “This is very exciting in our situation, especially for the following years. We have one purchase order now and are trying to make another one work. This is the right thing to do for Florida.”

Asked specifically about the dumping of foreign produce in the current disrupted market, Commissioner Fried said, “We push Florida products first; it’s what we work on every day. We are working every single day to keep agriculture the backbone of our economy.”