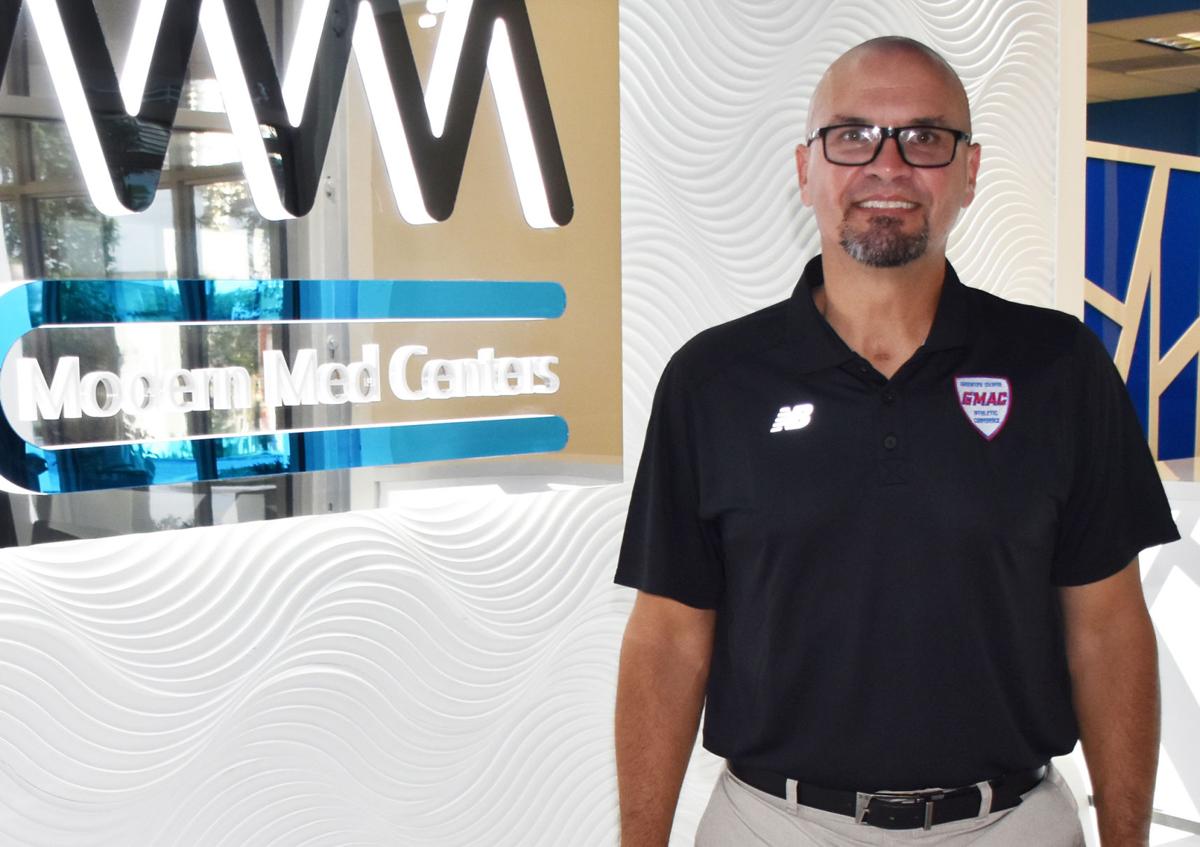 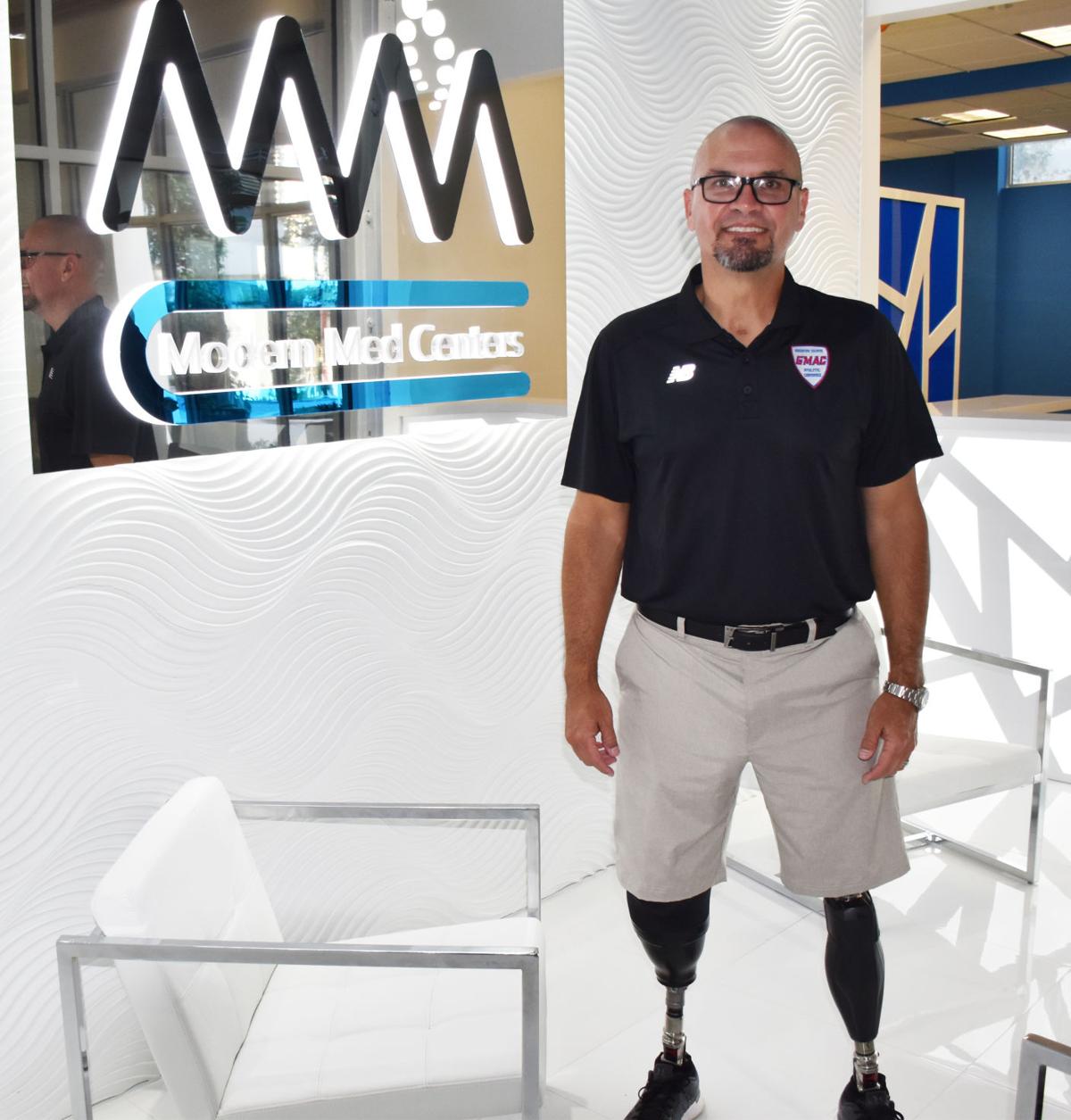 Recovering his life from a senseless tragedy that caused both legs to be amputated would be an admirable goal for Javier (Javi) Perez to have achieved. He has gone well beyond that, however, in recently opening a Modern Med Center in Dadeland.

By way of background, in April 2016, Perez, the popular principal at South Dade High School, was cheering his son among the players at their T-Ball game at Tamiami Park. The normal afternoon turned nightmarish within moments as a drunken driver plowed her SUV onto the field. As he shielded others, he was hit directly and pinned beneath the vehicle.

Despite quick action by an off-duty police officer applying tourniquets to his bleeding legs and transport to the hospital, the outcome was far from certain. His wife, Maytee, family, and friends prayed for his life as the medical teams did everything they could. Intense surgeries, 100 blood transfusions, and an induced medical coma followed with the news about being unable to save his legs. The literal and figurative crippling reality was met with a determination to make his way back. Family, faith, and support of the community combined with his willingness to endure thousands of hours of physical therapy and

constant meetings/treatments with many specialists. He spent two months in intensive care, then another two-and-a-half in rehabilitation. In adapting to prosthetic limbs, right side below the knee and left above, he will essentially be in physical therapy for the rest of his life.

With as many as six sessions a day scheduled, he was often sapped of energy. “There were times I didn’t want to do it, but a little voice told me I couldn’t let all these people down – family, friends, members of the community.”

The lack of energy was due to more than the obvious cause, however, and it was his wife who first spoke to the doctor about the possibility of low testosterone as a contributing factor. As can happen, the idea was dismissed. Undeterred, she spoke with another physician who did run tests. Convinced the results could not be correct, the tests were run a second time. Despite his injuries, Perez’s level should have been no less than four hundred and closer to six hundred. The number of “three” was shocking. Appropriate treatment was initiated and as he was able to eat more and gain strength, his ability to handle physical therapy improved.

The idea of perhaps helping other people faced with similar situations was sparked by this experience. Medical technologies and treatments are complex and as expert as a specialist may be, viewing the patient holistically is often not a consideration. The short time of only minutes a doctor can spend is well-known and the belief that whatever the doctor says must be correct is a common reaction.

“They’re human and can make mistakes or miss something,” Perez says.

“I kept thinking that if there was a clinic or facility where people could go that had these multiple services available, it could make a difference.”

Discussions with a close friend, then later also his attorney led to

action as well as talking. The result is the opening of Modern Med Center in Dadeland where, “We help people restore their vitality to continue to enjoy life with confidence.”

Physical therapy is on-site, but also various treatments such as Hormone Replacement Therapy that can have a major impact in recovery. “We provide information and services that maybe a primary physician doesn’t give because he isn’t looking at the wholeness aspect,” Perez explains. “It’s a one-stop shop to be able to take care of the issue; not just fix a single issue. What we’re changing is to listen, to get to know the person, to really assess the entire condition and get to the root of the problem.”

Perez, who has returned to work after his long absence, is now with Miami-Dade County Public School operations. He works all day, attends physical therapy sessions, and then heads to the clinic. As their website says, “We are a group of clinical professionals dedicated to offering reliable services that improve your overall health and wellness. Our staff brings a wealth of knowledge and experience to the services that we provide in order to help our patients continue to live a fulfilling, vibrant and engaging life at any age. We provide a variety of treatments designed to help both men and women discover the joys of life that are still waiting to be experienced.”

Anyone who comes into the clinic can be assured of a personal assessment. “I feel recovering from a trauma requires being mentally strong, no matter what the trauma is; injury, death in family, whatever the individual is dealing with. I believe I’ve been able to recover due to the love I’ve felt on a daily basis from family and community,” Perez said.

Perez has spoken at numerous events as an inspiration to people. Achieving this new goal of helping others is one more example of how, as he says, “This story has to end on a good note and there’s still a lot to come.”