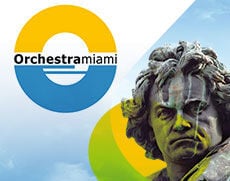 This event has passed

Orchestra Miami presents Symphony Sundays: A series of online performances of the 4-hand piano arrangements of the first eight of Beethoven’s nine symphonies. Sundays at 4 PM beginning on Nov. 1st. Reserve your ticket for the LIVE Zoom performance by visiting http://bit.ly/omss1115 or listen via Orchestra Miami’s Facebook Page here: www.facebook.com/OrchestraMiami Beethoven’s Symphony N. 2 in D Major, Op 36 will be performed by Elaine Rinaldi and Don Cannarozzi. Elaine Rinaldi, Founder and Artistic Director of Orchestra Miami, is a Miami native who has chosen to return home and reinvest in her community. In addition to her work with Orchestra Miami, Ms. Rinaldi maintains an active presence on the stage as a chamber musician and recital accompanist, working with some of the most recognizable names in opera. Notable recital engagements have included performances with Metropolitan Opera stars Russell Thomas, Eglise Gutierrez, Elizabeth Caballero and Yunah Lee, whom she accompanied in a recital tour of Japan. Don Cannarozzi received a Bachelor of Music degree in piano performance from the Cleveland Institute of Music, where he studied with Jack Radunsky, and a Master of Music degree in Organ Performance from The Florida University, where he studied with Muchael Corxine. Being a pragmatist, Cannarozzi also obtained his law degree from FSU. On September 1, 2018, Cannarozzi retired from law and now donates all his energy to his life-long passion for music. Cannarozzi met Elaine Rinaldi when she worked for Florida Grand Opera, and is honored that she asked him to participate in the Beethoven Symphony Sundays four hand festival. To hear this incredible duo perform, reserve your ticket on Zoom by visiting http://bit.ly/omss1115 or listen via Orchestra Miami’s Facebook Page: www.facebook.com/OrchestraMiami Happy 250th Birthday Beethoven!